Just as the world is reeling from the "WannaCry" virus, which infected global institutions and businesses, a new kind of malware similar to it has been found in China.

The ransomware "Green Hat" will prevent users from starting up their operating system, according to statistics from Cheetah Mobile, a Chinese mobile tools provider.

Instead, a window with a QQ instant messaging account number will pop up, demanding users to enter a password to unlock files. 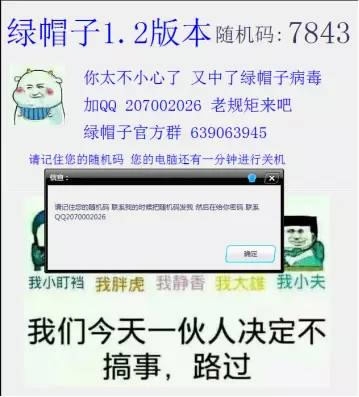 Users have to pay a fee to unlock their infected computer. / Cheetah Mobile

Unlike most malware developers who operate under a veil of anonymity, the one behind "Green Hat" has chosen to reveal their QQ account number to the public, putting them in the spotlight.

"There is no need to panic," said Li Tiejun, a researcher from Cheetah Mobile. "The new malware has not spread wildly in China. As long as users fortify their firewalls and anti-virus software settings as soon as possible, there is no need to be worried about the 'Green Hat'."