Where did manufacturing jobs in the US go?
BUSINESS
By Zhao Hong

Where did US manufacturing jobs go? Did China steal US jobs? The answer is more complicated than a simple "Yes" or "No." Even though some people might buy US President Donald Trump’s rhetoric on China, the fact is that US enterprises move their jobs all over the world, and the country’s manufacturing jobs are disappearing for wider reasons than international trade.
More jobs have shifted to China, Vietnam, and others, though, which is the case with Apple.
Apple Inc. has become the poster child for US multinational companies accused by the Trump administration of failing to bring more jobs to the US.
The tech giant employed 76,000 people in the US and 40,000 overseas in 2016, a small fraction of the over 400,000 US workers at General Motors in the 1950's, or the hundreds of thousands at General Electric in the 1980's. Many more people also work for Apple’s contractors in the supply chain in Asia and elsewhere in the world.

Apple didn’t just go to China, it has also started to transfer its manufacturing work to other countries as China transformed its economic development model from labor-concentrated to more high-tech focused.
Like other multinational companies, Apple ships jobs overseas because the costs are so much lower – not just wages, but also the flexibility of being closer to the supply chain as well as the diligence and industrial skills of foreign workers
The truth of 'Made in US'
Apple has a globalized supplier network. Suppliers choose to move manufacturing jobs into countries like China, Malaysia and Vietnam because they can produce consumer goods at a lower cost than other countries. Americans, of course, want these goods for the lowest prices.
An evaluation by Marketplace looked into the hypothetical cost of a US-made iPhone. It determined that with all the components made in the US, the device could retail for as much as 2,000 US dollars.
How do these countries keep prices so low? Most economists agree that those countries’ competitive pricing is a result of two factors: a lower standard of living which allows lower wages, and an exchange rate that is partially fixed to the US dollar.
Most American companies can't compete with these low costs. As a result, US manufacturing jobs are lost. From time to time, legislators try to impose tariffs or other forms of trade protectionism against China to bring jobs back.
Trump said on the campaign trail, "If a company wants to fire their workers, leave Florida, move to another country, and then shift their product back into the United States, we will make them pay a tax of 35 percent."
If the US implemented such trade protectionism, US consumers would have to pay higher prices for their "Made in US" goods. Many people would rather pay as little as possible for computers, electronics and clothing, even if it means other Americans lose their jobs. So it's unlikely the trade deficit would change.
In addition, it's hard in the US to find the skilled workers required. IHS Markit Technology’s Outsourced Manufacturing Intelligence Service estimates that the Chinese workforce which makes the components and assembles the iPhone totals over 150,000. The infrastructure to develop these types of electronics was never in the US to begin with, so the concept of bringing it back would actually involve replicating and building from scratch the entire manufacturing network that has grown and matured in Asia over the last few decades.
Also, by moving jobs to the US, American companies would ultimately lose their competitiveness to their international peers.
Trump claimed the US has "lost 60,000 factories" since China joined the World Trade Organization (WTO).
Partly true. China became a member of the WTO in 2001. And statistics show that US manufacturing jobs have dramatically dropped since that year.
But let’s look at another trend: although there has been a steep decline in factory jobs, the manufacturing sector has become more productive and industrial output has been growing. 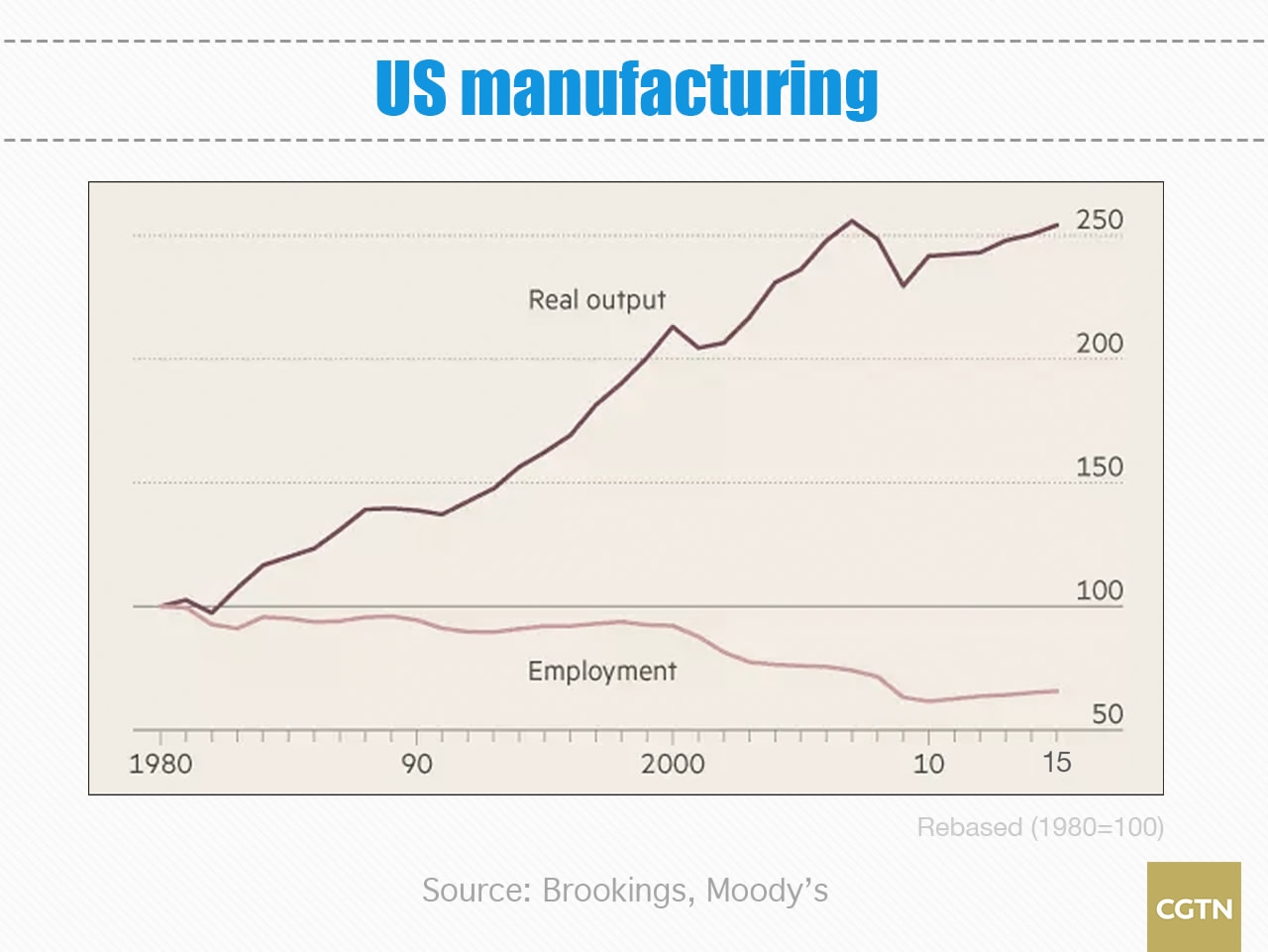 According to a study by the Center for Business and Economic Research, 85 percent of these job losses are actually attributable to evolving technologies, such as artificial intelligence, automated and electronic manufacturing and management, rather than international trade.
Fundamentally, it is a mistake to blame US manufacturing job losses on China. In fact, these technological advancements substantially increase efficiency, productivity and have replaced manufacturing sector jobs.
US-China trade creates substantial benefits for the US
This is not to say that trade with China and other countries has not contributed to US job losses. The US trade deficit with China was 310 billion US dollars in 2016. US exports to China were 170 billion US dollars while imports from China were 480 billion US dollars.
"They come in. They take our jobs. They take our products. They make a fortune. And we owe them 1.5 trillion dollars," Trump said of the US trade deficit to China.
But ‍US-China trade has brought more benefit than damage to the US economy. 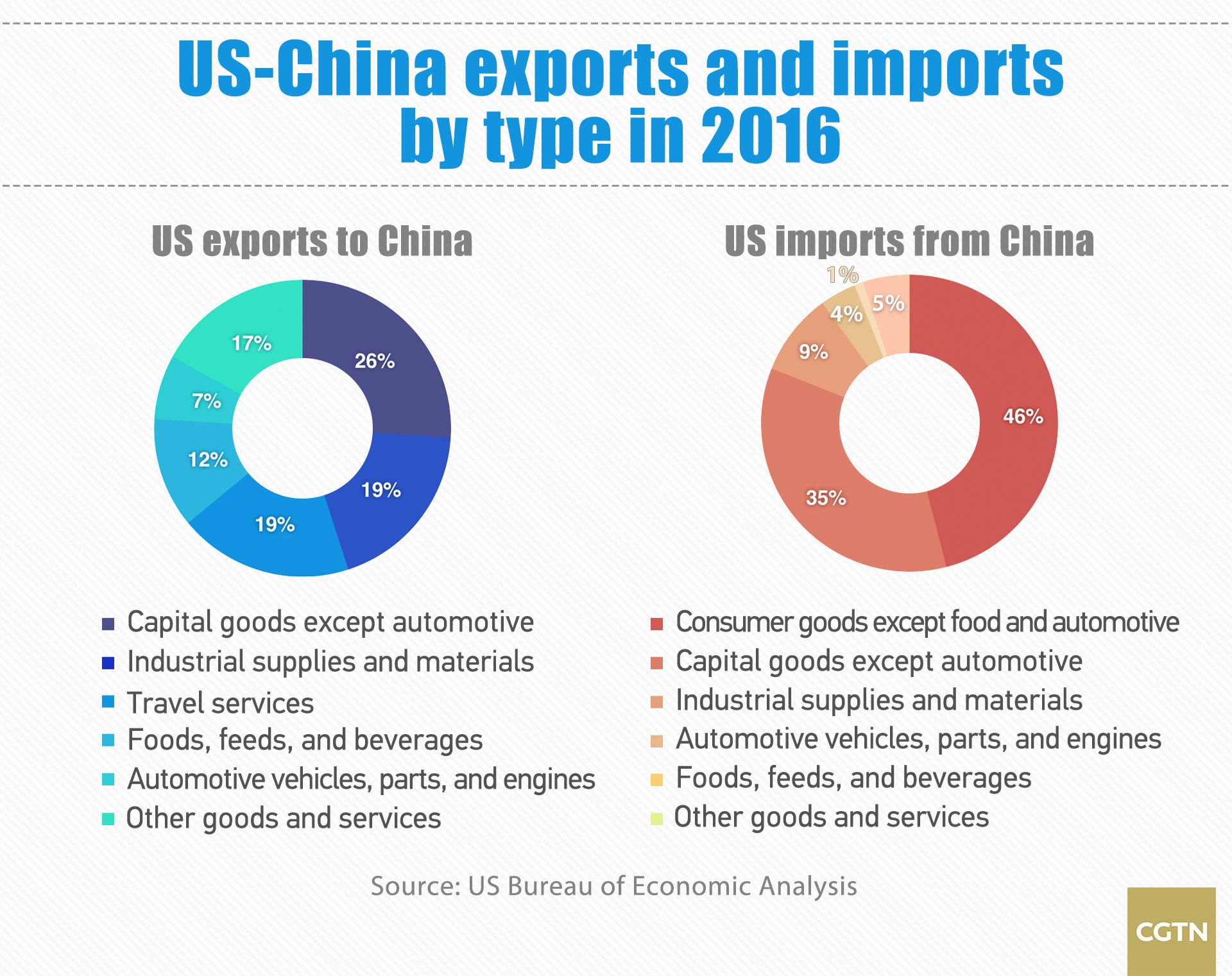 The US imports consumer electronics, clothing and machinery from China. A lot of the imports are from US manufacturers that send raw materials to China for low-cost assembly. Once shipped back to the United States, they are considered imports.
The US Bureau of Economic Analysis (BEA) indicates that the top American export categories to China in 2016 were generally high value-added, bringing substantial profits back to the US.
The high-value products from China sold by US firms, including automobiles, construction equipment, and semiconductors, support jobs.
Instead of focusing on China’s huge trade deficit with the US taking away jobs, the US should take a look at the worrying trade deficit per capita. 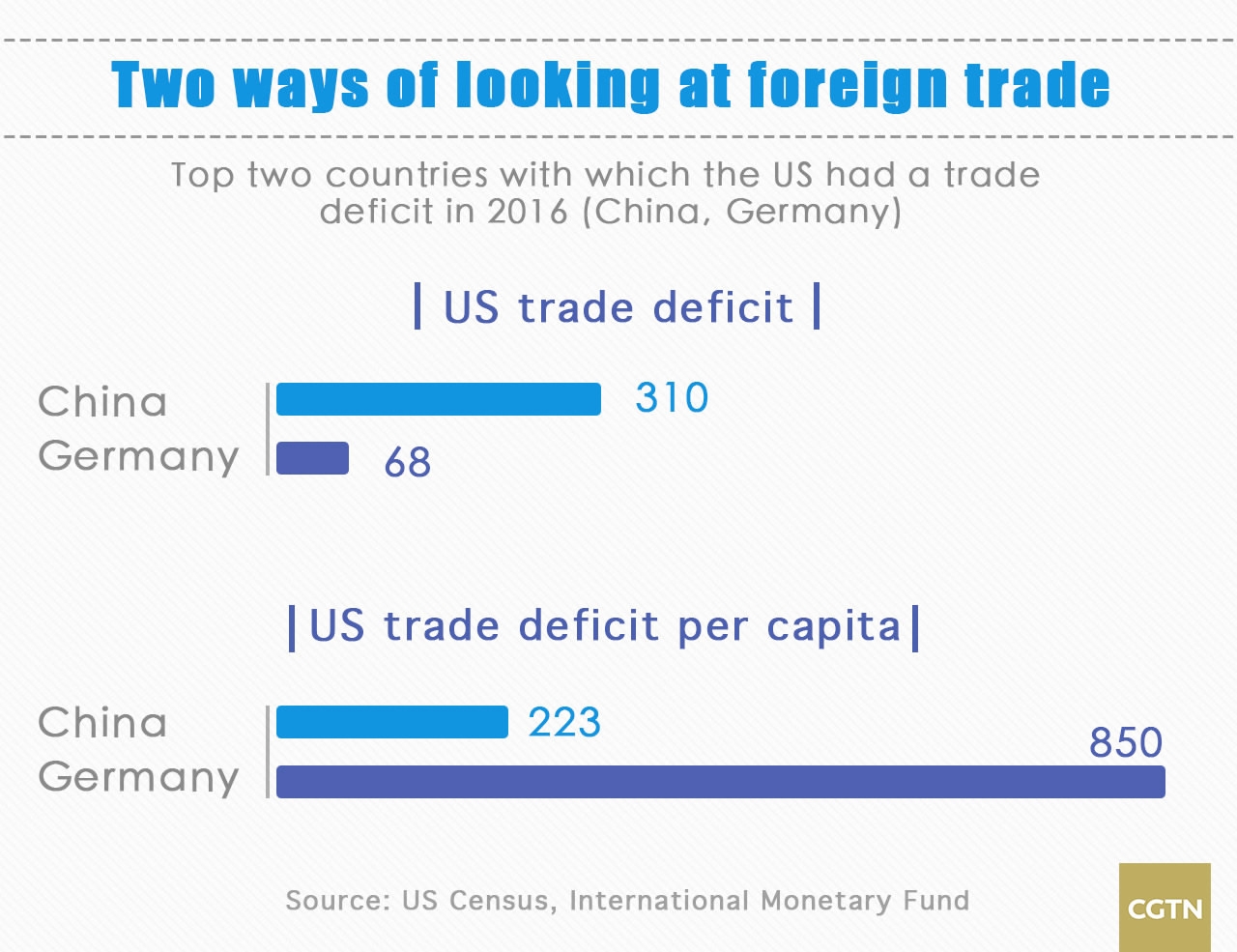 Competition from high-value exporters such as Germany poses a challenge that, so far, has been largely ignored by US politicians.
Today, a large number of new US jobs are created by exports to China. China has become the third-largest purchaser of US-made products and services (after Mexico and Canada), buying nearly 170 billion US dollars in goods and services in 2016 alone.
According to an Oxford Economics report, US exports to China directly and indirectly supported 1.8 million new jobs and 165 billion US dollars in GDP in 2015. When the economic benefits generated from US investment in China and Chinese investment in the US are combined, the total amounts to 2.6 million US jobs and about 216 billion US dollars of GDP.

Chinese manufacturing also lowered prices in the US for consumer goods, dampening inflation and putting more money in American wallets. At an aggregate level, US consumer prices are 1 to 1.5 percent lower because of cheaper Chinese imports. The typical US household earned about 56,500 US dollars in 2015; trade with China therefore saved these families up to 850 US dollars that year.
Copyright © 2017