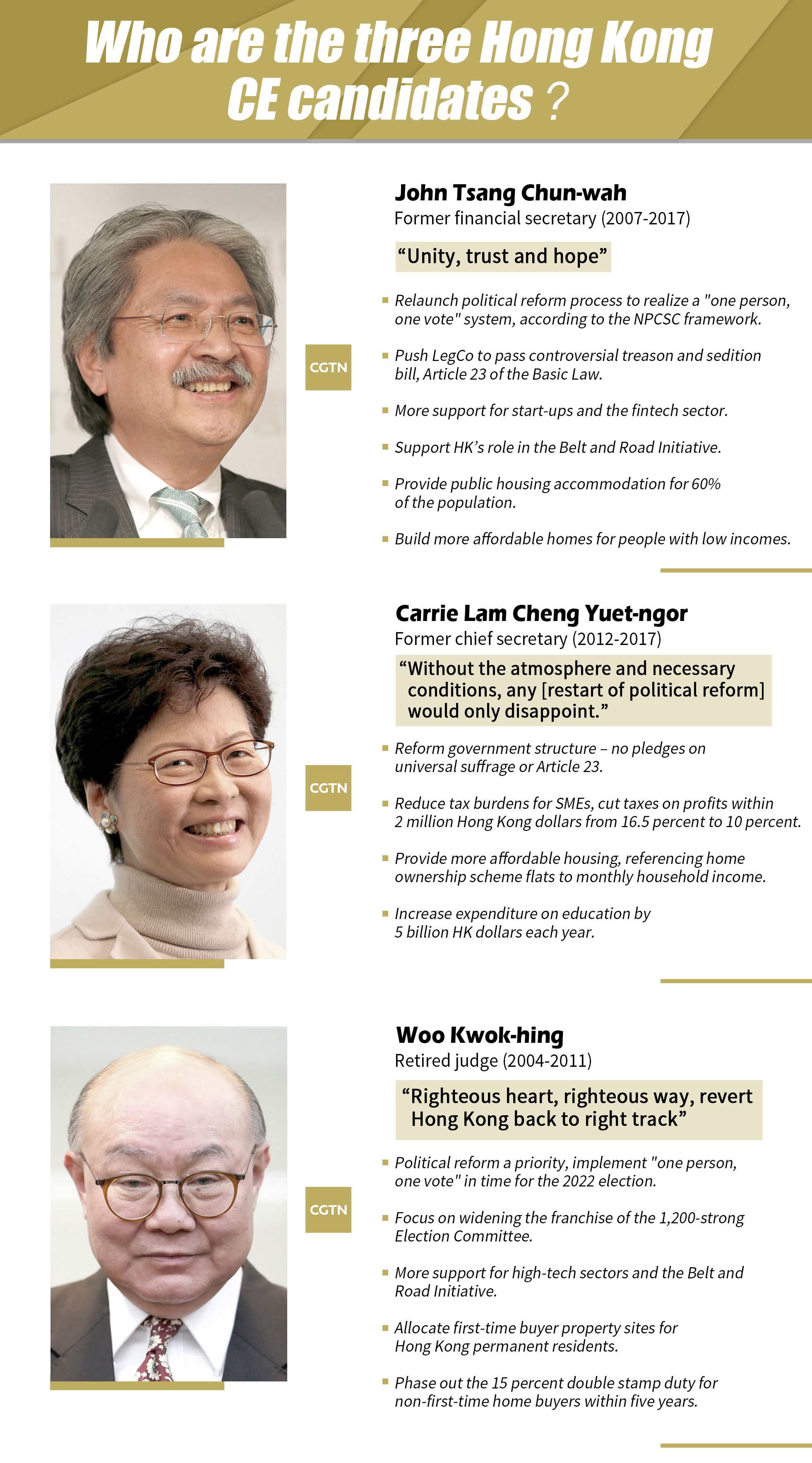 An infographic tells you more details about who the three Hong Kong chief executive candidates are. /CGTN Photo
The trio came to the stage with Carrie Lam in the center, flanked by John Tsang and Woo Kwok-hing, debating issues concerning the economy, politics and people's livelihood.
The debate came in full swing when the trio directly put questions to their rivals and answered questions from the media and audience.
Society ‍unity
00:00
00:00
undefined
The three candidates all emphasized the unity of Hong Kong in their introductions.
John Tsang Chun-wah, the first to elaborate, said what Hong Kong needs most today is unity in society. Carrie Lam called for trust for Hong Kong authorities. Woo Kwok-hing proposed political reform and said he wanted to participate in the election to fight against "the abuse of rights."
Hong Kong Independence
00:00
00:00
undefined
Asked by journalists about Hong Kong independence, Lam said there was no space for such a move, promising that the independence movement would spread no further under her governance.
Woo asked Lam if the topic of Hong Kong independence would be allowed to be discussed at schools. He got the reply “We have free speech in Hong Kong, but teachers have the duty to teach students. The phenomenon is in conflict with the country. We need to discuss in the right way... Students should not have a wayward understanding of the country.”
Tsang believes “there is no future for Hong Kong independence,” and the desire for Hong Kong independence reflects governance problems.
Hong Kong’s economic development
00:00
00:00
undefined
Woo Kwok-Hing suggested the most important thing for Hong Kong’s economic development is to invest more resources into new technologies, in order to increase GDP growth.
He also expressed a belief that Hong Kong should modify the law to encourage more innovative businesses.
Carrie Lam opposed John Tsang’s opinion that the economic development rate should not be too high. And she said she was confident that support from the central government would aid Hong Kong's development.
Hong Kong friction
00:00
00:00
undefined
When asked how to resolve the frictions in Hong Kong society, Tsang pointed out that these were fuelled by citizens' perceptions of injustice. “We must understand each other. We must understand what’s happening on different parties.” Common ground should be reached through discussion with relevant legislators, he said.
This debate also features questions from the audience.
00:00
00:00
undefined
When asked how to use governance principles to create an atmosphere of trust in Hong Kong, Tsang said the first key step is to elect the most supported candidate to be the chief executive. Secondly, he “will lead a team who has trust in society to work for the society, to make society more stable.”
The three candidates had their first debate organized by the Professional Teachers’ Union, one of the city’s biggest labor unions by membership. They will face another debate this Sunday hosted by the pan-democratic and the pro-establishment camps of the Election Committee.
The election for the fifth Hong Kong chief executive will take place on March 26 by the election committee comprising 1,194 selected committee members.
(Video source: TVB‍)
1970km
Copyright © 2017