A hemispherical dome, 340 tonnes in weight and 16.8 meters in diameter, has been installed by crane at the fifth unit reactor featuring Hualong One design.

"The installation, if successful, will mark the completion of its construction work and the start of the assembling stage," Yu Peigen, deputy general manager of China National Nuclear Corporation (CNNC) told media on Wednesday at a press conference about the project. 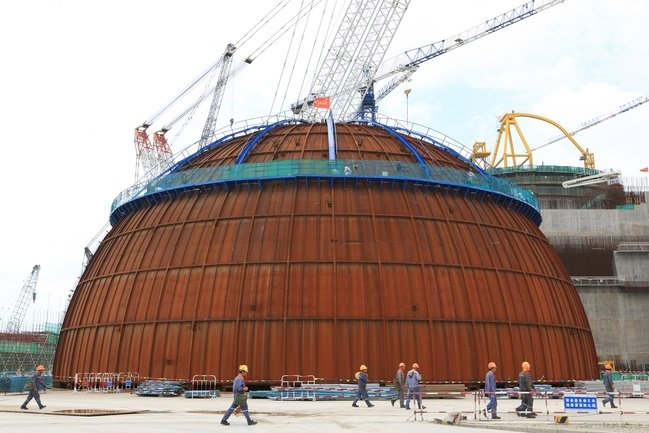 The dome for the fifth reactor at Fuqing is lifted on Thursday morning. /CNNC Photo

What is Hualong One?

Hualong One technology is a pressurized water reactor design that is applied to homegrown third-generation reactors.

Jointly developed by two Chinese nuclear power giants, China General Nuclear Power Group and CNNC, the Hualong One technology has been applied to the fifth and sixth units at Fuqing. One of its key features is that it is meant to increase the reactor's safety performance making it far more able to withstand serious damage.

"The reactors can even withstand a tsunami of the strength that triggered Japan's Fukushima disaster," vice chief engineer of the reactors Xue Junfeng told media in an interview in 2016.

The start of mass production?

The hope of all concerned in the current project is that a successful installation could mark the start of construction of third-generation reactors on a mass scale, the deputy manger of CNNC said at the press conference.

China's development of nuclear technology in power projects has also made fruitful achievements in export market.

"The third-generation Hualong One reactor, being a star export, will also lead to more equipment manufacturers going abroad."

During the Belt and Road Forum, China signed deals with Argentina to supply two nuclear power reactors in the South American country, including one using Hualong One design.