By CGTN’s Frances Kuo
“March for Science” rallies were held in hundreds of cities around the world, including in major centers like Berlin, Washington, and Sydney to raise awareness for environmental protection.
The marches in support of science come amid the Trump administration’s proposals for budget cuts for scientific research and the Environmental Protection Agency. US President Donald Trump has also called climate change – a fact that enjoys the overwhelming support of the scientific community – a hoax.
“I have a real deep concern that science, the practice of science, is under threat,” said Arnie Miller, a geology professor at the University of Cincinnati. 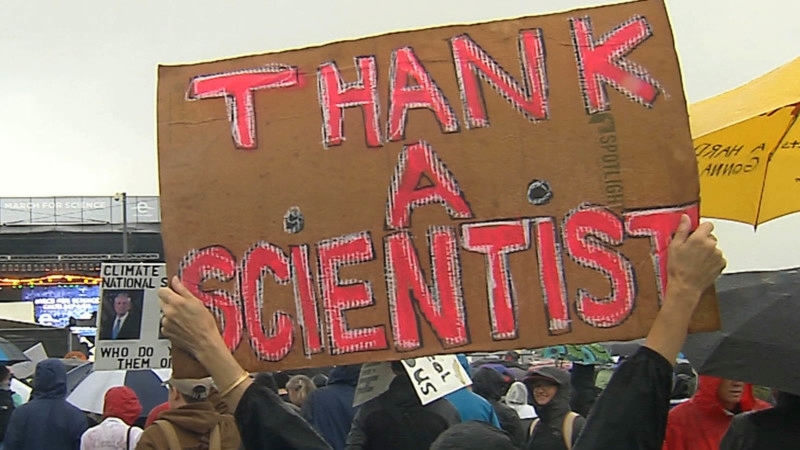 A protester holds a sign in Washington DC April 22, 2017. / CGTN Photo
Miller was among the thousands of people at a March for Science rally in the US capital. Protesters braved rainy weather to join the rally, which marks Earth Day on April 22.
Also at Saturday’s rally was Allison Rahs, a middle school teacher. “Since I was a little kid, science was so important, being outdoors, seeing nature,” Rahs said, adding that science has been deeply politicized in the US because of Trump’s rise to power.
Rahs said she was worried scientists are unfairly losing credibility. “We’re not just nerds sitting in a laboratory. We want to make change, we want to make the world a better place,” Rahs said.
Miller didn’t consider the March for Science political. For him, it’s a chance for scientists like him to step out of the lab and into the limelight. 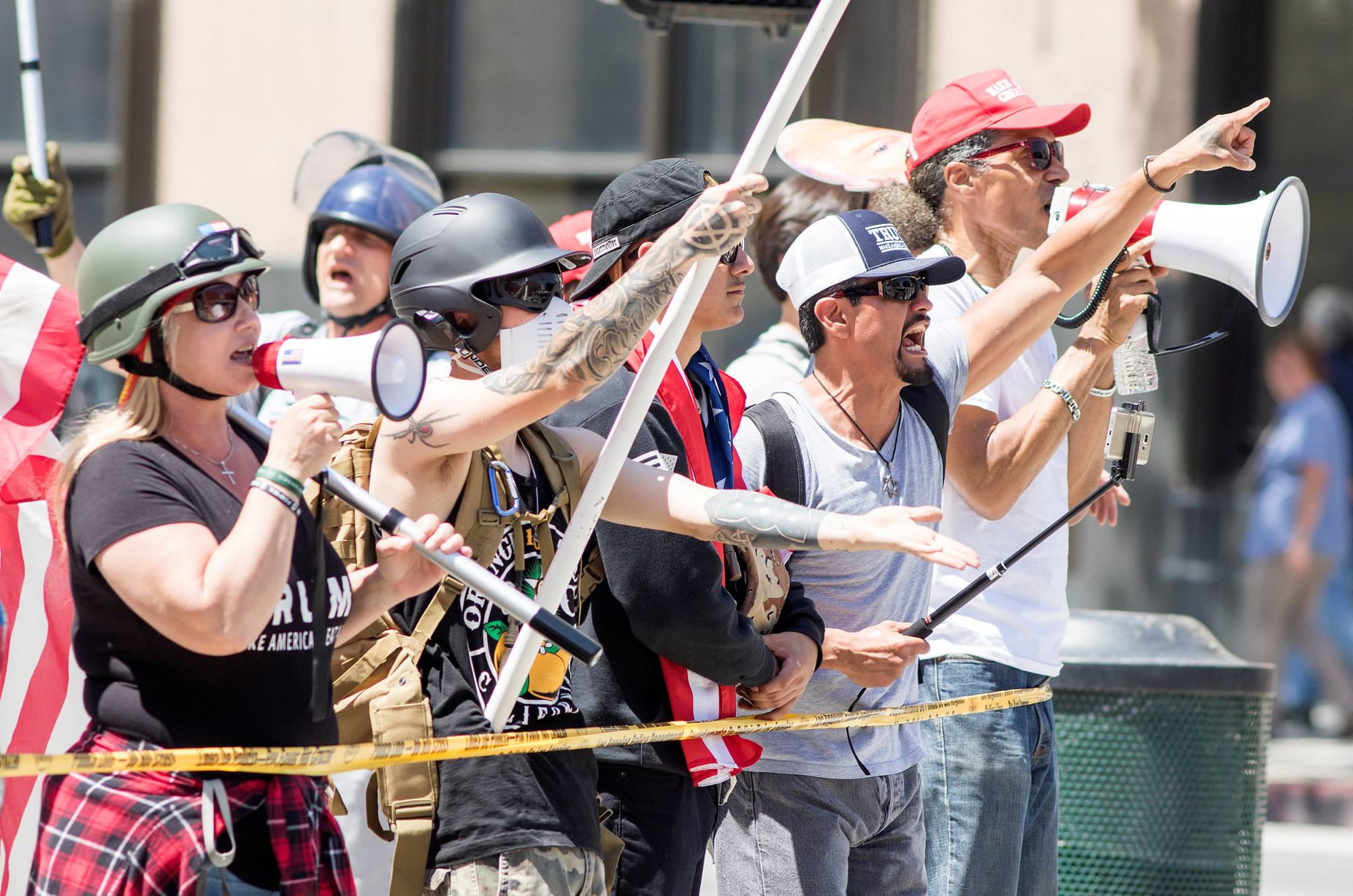 Trump supporters shout "Science kills monkeys" at marchers as they advance toward Town Hall during the March for Science Los Angeles in Los Angeles, California April 22, 2017. / VCG Photo
“Too often scientists isolate themselves in their work and don’t reach out as much as they can to public discourse and to help educate people,” Miller said.
More than 600 cities around the world hosted rallies such as the one in Washington.
“I think when people find the truth inconvenient, it’s very easy for them to start to ignore that, and I think it’s our part as scientists to make sure that we’re getting messages across effectively,” one protester in Sydney said.
“Science doesn’t tell society what to do, ever. But what it does provide is a foundation of knowledge, evidence-based knowledge, that let’s society make good decisions, and we want to stand up for that way of doing things,” Dr. Helen Czerski, a physicist and lecturer at University College London said. 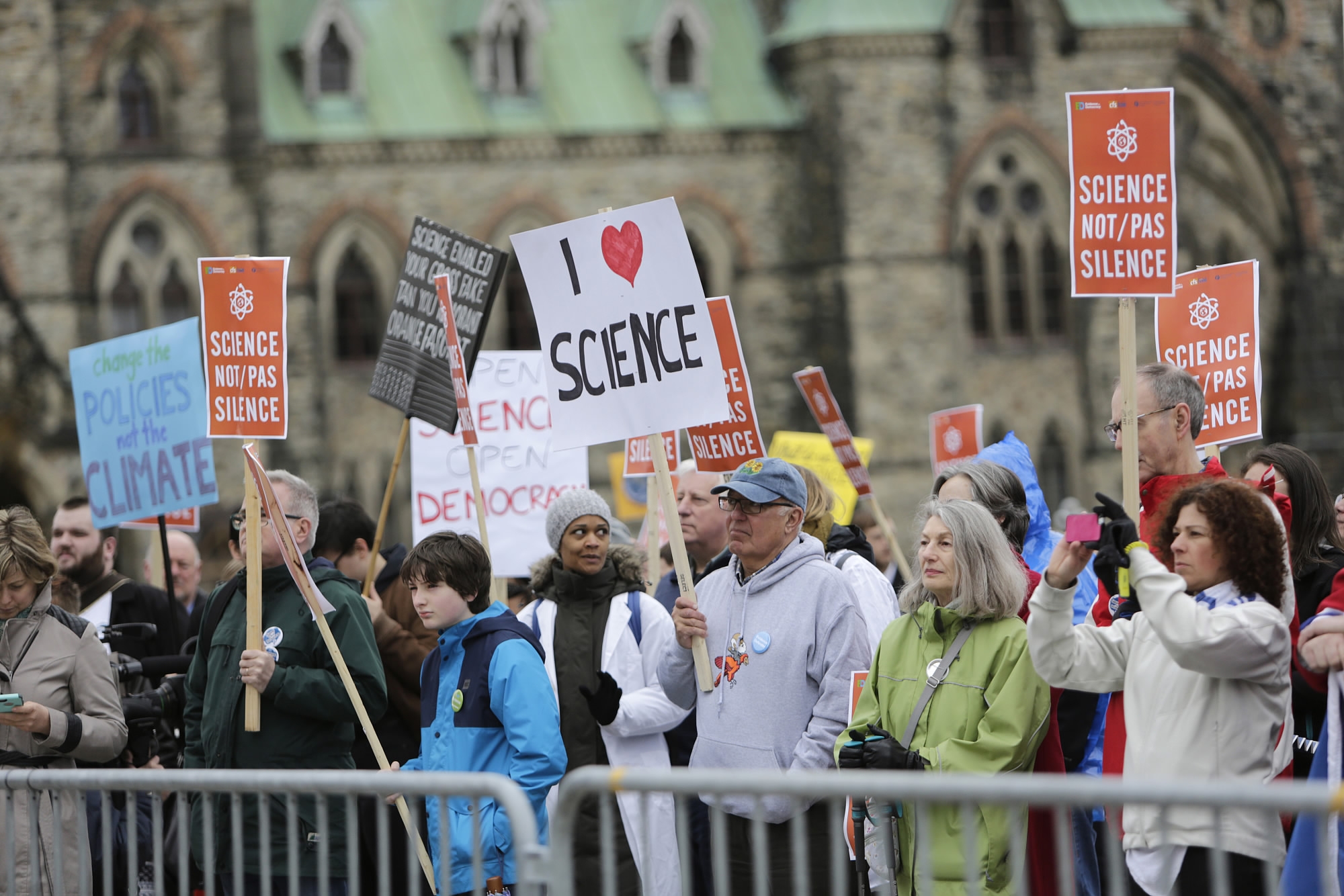 Demonstrators hold signs during the March for Science rally on Earth Day at Parliament Hill in Ottawa, Ontario, Canada, on Saturday, April 22, 2017. / VCG Photo
The scientists and their supporters said they are well aware change takes time. However, they said bringing about awareness about the value of science is a start.
“I think babies are scientists, we start out trying to learn about the world, how does this work?” Jesse Alexander, a former electrical engineer and now technical writer, said. “We are all scientists in a sense. It’s just what humans do.”
Related stories:
The history of Earth Day
Closer to China: China’s science
11159km
Copyright © 2017