Why is the UK counting on Chinese maths textbooks?
SOCIAL
By Zhang Ruijun

By CGTN’s Wang Duan
The news that Chinese maths textbooks will be introduced in Britain has caught the attention of people in China and abroad. Publisher HarperCollins recently signed a “historic” agreement with a Chinese publisher to release in the UK a series of 36 maths books used by Shanghai primary school students.
These textbooks, created for students in China, will be translated exactly with no editing to adjust them to the UK’s local curriculum. Fiona McGlade, Primary Publishing Manager of HarperCollins Publishers, described the Chinese books as "fantastic," saying they couldn't be improved upon. 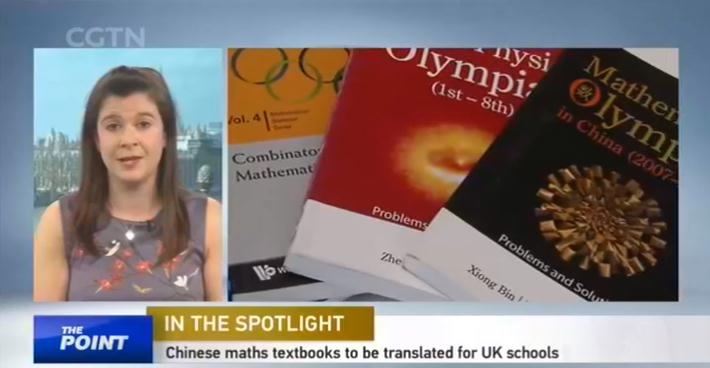 Fiona McGlade, Primary Publishing Manager of HarperCollins Publishers /CGTN Photo
Actually it is not the first time that HarperCollins has published Chinese maths textbooks in the UK. McGlade pointed out that in 2015, HarperCollins published a maths textbook "One Lesson One Exercise," and the feedback was overwhelmingly positive.
The textbook deal is only part of the UK’s Teaching for Mastery Program announced in July 2016. The program aims to spend around 51.5 million US dollars to support and encourage half of England’s primary schools to adopt Asian math teaching methods.
The plan includes goals of training 700 math teaching specialists, and funding teachers from around 8,000 schools to be trained in Asian teaching methods.
The bilateral Mathematics Teacher Exchange Project launched in 2014 promoted British teachers coming to Shanghai to learn, and Shanghai teachers going to the UK to share their skills.
Hundreds of teachers have joined the project since then, with all expenses supported by the British government.
But why does the UK admire the Shanghai model of maths teaching so much? The test results of the past few years of the PISA program, which is an internationally recognized test of students' performance in sciences, show students from Shanghai as top-performers in maths.
Although there is a widespread perception that Chinese education is very rigid, it is notable that not only the UK but also other countries are very interested in China's education system.
Yan Wang, the Director of the Department for International Exchange of the National Institute of Education Science, told CGTN that China has impressed the world with its outstanding performance in the PISA maths texts. She also mentioned that the BBC documentary "Are Our Kids Tough Enough? Chinese School” showed the world the efficiency of Chinese teaching methods.
The host of CGTN's The Point, Liu Xin (@thepointwithlx), closed the discussion, saying “there appears to be a Yin/Yang relationship between mastery and creativity, collective and individualistic learning. Mastery is no substitute for creativity, but without mastery you cannot create. Collective learning ensures no one is left behind, but does not encourage anyone to leap ahead. Clearly, methods which teach young children mastery of core subjects is a necessary step before they can learn to solve problems. The schools in the UK have decided to embrace the Chinese method to balance what they already have. For sure, much more hard work is needed by the students if they really want this to work”.
Copyright © 2017