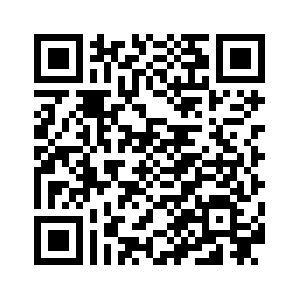 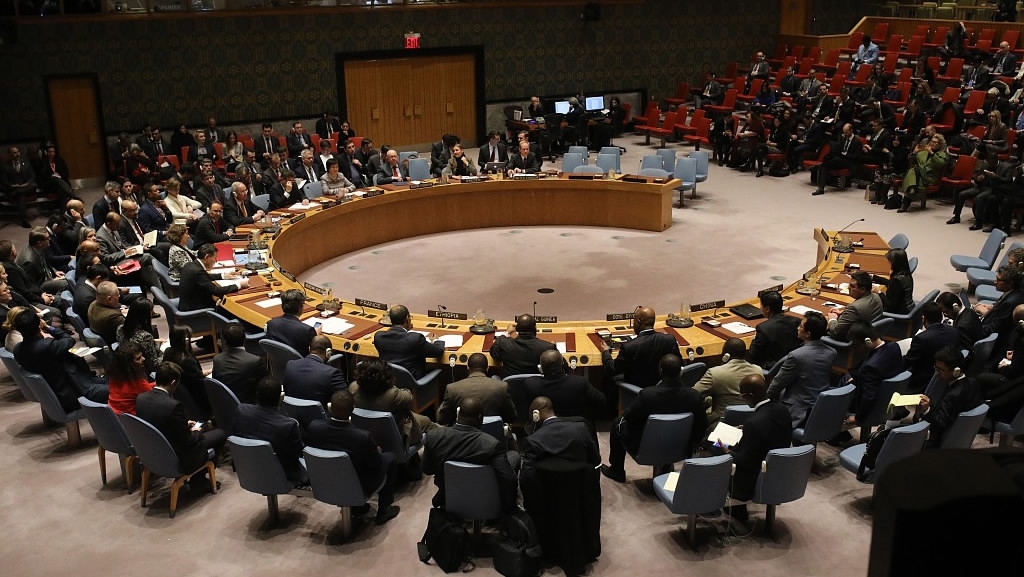 The United States and Russia clashed over Iran at the UN Security Council on Friday as a third straight day of pro-regime rallies were held following a wave of deadly protests.
US Ambassador Nikki Haley pushed for the meeting of the top UN body, arguing the unrest could escalate into full-blown conflict, drawing a comparison with Syria.
"The Iranian regime is now on notice: the world will be watching what you do," Haley warned.
Russia opposed the US push for Iran to be discussed at the Security Council, arguing the protests pose no threat to international peace and security. 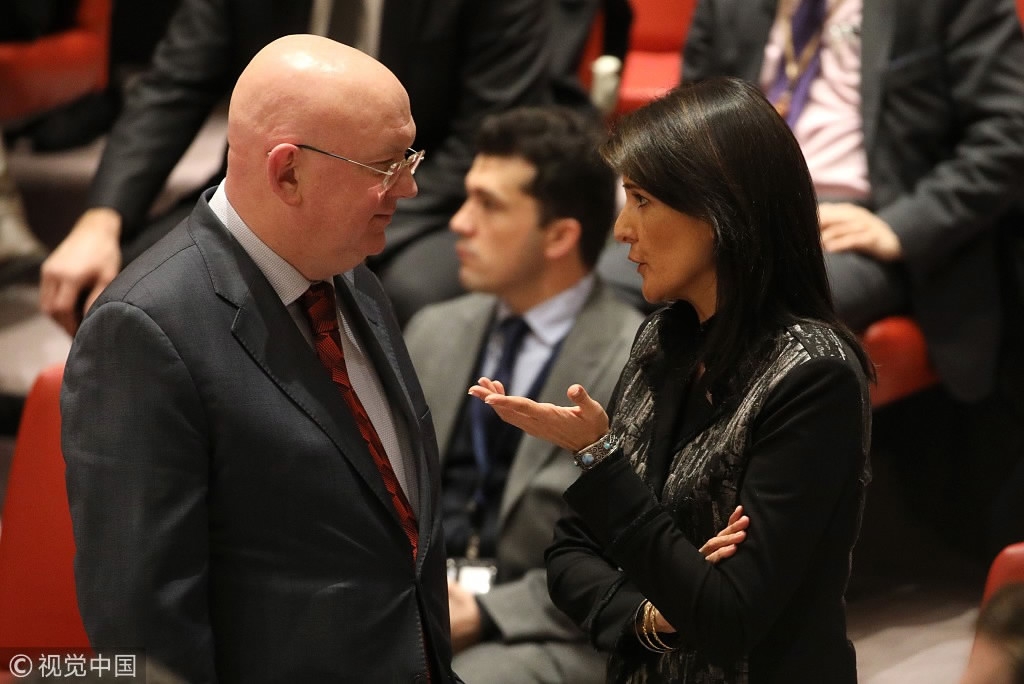 But Moscow stopped short of seeking to block the meeting.
A total of 21 people have died and hundreds have been arrested since December 28 as protests over economic woes turned against the regime as a whole, with attacks on government buildings and police stations.
Pro-regime rallies were held around Tehran Friday for the third day running with authorities seeking to put a lid on the violence. There were some reports of small anti-government demonstrations in provincial towns, but these could not be verified.
"We obviously regret the loss of life as the result of demonstrations that weren't so peaceful," Russian Ambassador Vassily Nebenzia told the council.
"However, let Iran deal with its own problems," he said.
Iranian officials have blamed a plot by the CIA, Israel and Saudi Arabia for the unrest that convulsed much of the country for five days – part of the increasing tensions playing out between Iran and its neighbors since President Donald Trump came to power.
The United States has meanwhile piled pressure on Iran, with Trump pledging to help Iranians "take back" their government.
A threat to peace?
Washington has imposed unilateral sanctions on five Iranian companies linked to Tehran's ballistic missile program.
"The Iranian people are rising up in over 79 locations throughout the country," Haley told the council.
"It is a powerful exhibition of brave people who have become so fed up with their oppressive government that they are willing to risk their lives in protest." 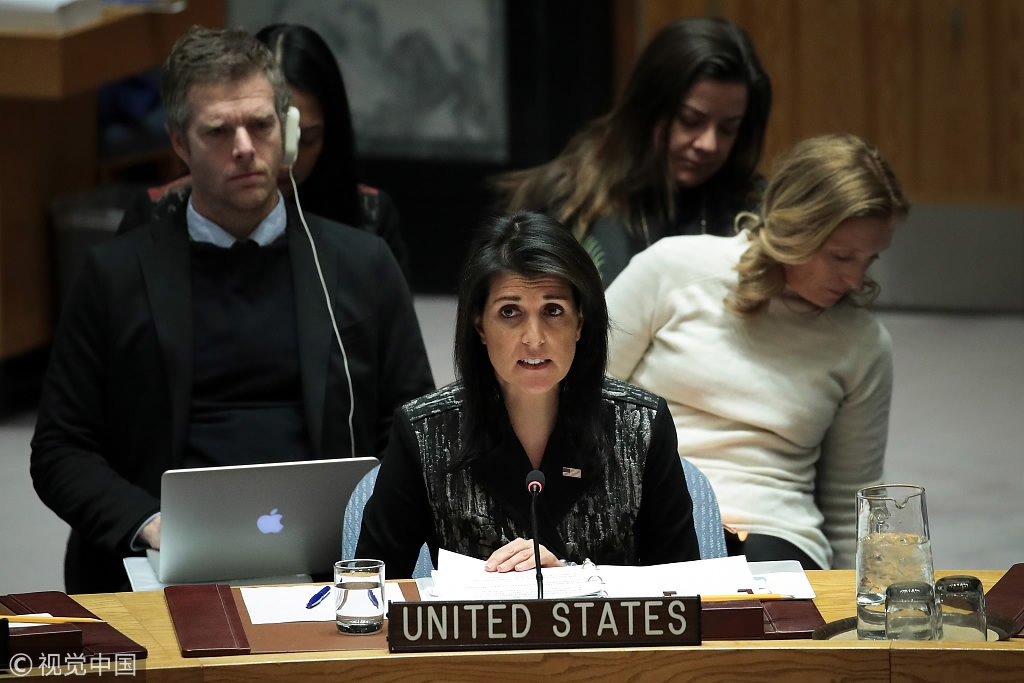 Russia's envoy shot back that if the US view holds, the council should have also discussed the 2014 unrest in Ferguson, Missouri over the police shooting of a black teenager or the US crackdown on the Occupy Wall Street movement.
China also described the meeting as meddling in Iran's affairs, while Ethiopia, Kuwait and Sweden expressed reservations about the discussion.
Britain and France reiterated that Iran must respect the rights of protesters, but French Ambassador Francois Delattre said the "events of the past days do not constitute a threat to peace and international security."
Iran's Ambassador Gholamali Khoshroo slammed the meeting as a "farce" and a "waste of time" and said the council should instead focus on addressing the Israeli-Palestinian conflict or the war in Yemen.
Iran's foreign minister also blasted the UN meeting as another foreign policy blunder of the Trump administration.
"The UNSC rebuffed the US' naked attempt to hijack its mandate... Another FP (foreign policy) blunder for the Trump administration," Mohammad Javad Zarif wrote in his tweet.
'CIA plot'
It remains difficult to gauge who was involved in the anti-government unrest.
President Hassan Rouhani's supporters have blamed conservative rivals for stoking anger over economic issues, which quickly spiraled out of control.
The conservatives deny the accusations and say Rouhani must do more to help the poor. 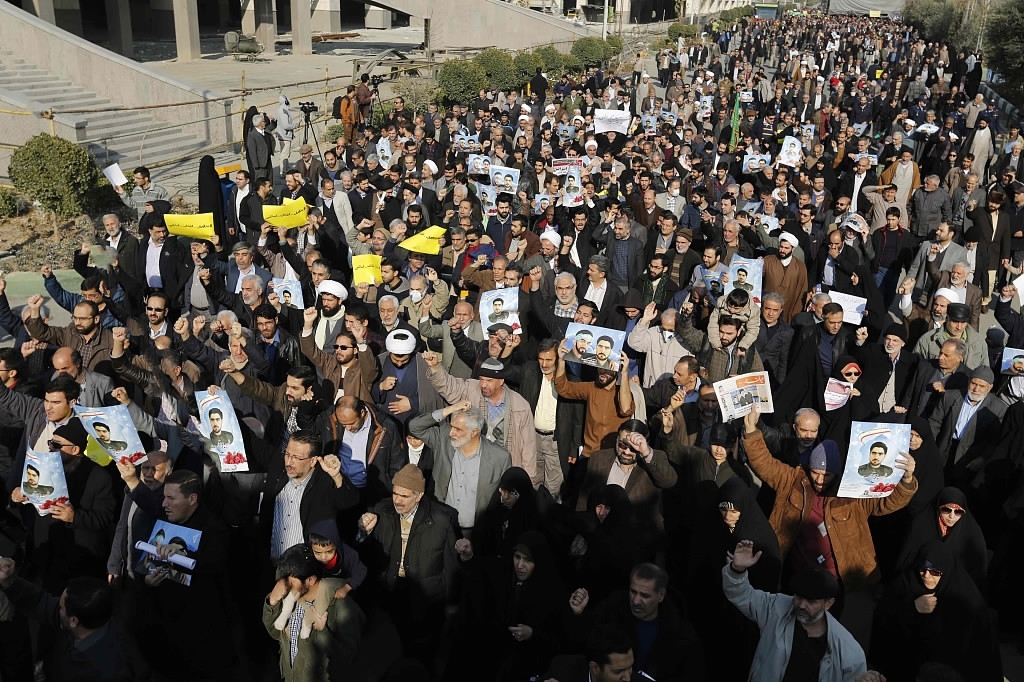 Iranian pro-government demonstrators take part in a march in central Tehran after the weekly Friday prayers, January 5, 2018. New pro-regime protests were held in Iran, in reaction to the protests against the government and the cost of living. /VCG Photo

Iranian pro-government demonstrators take part in a march in central Tehran after the weekly Friday prayers, January 5, 2018. New pro-regime protests were held in Iran, in reaction to the protests against the government and the cost of living. /VCG Photo

Chief prosecutor Mohammad Jafar Montazeri blamed the unrest on a plot dating back four years by the United States, Israel and Saudi Arabia, while also claiming there were efforts to infiltrate the Islamic State group into the country.
Many officials have nonetheless recognized the genuine economic grievances of many Iranians, particularly a jobless rate at close to 30 percent for young people.
Iran's economic growth rebounded to more than 12 percent last year after sanctions were lifted under a 2015 nuclear deal with world powers, but analysts say much of the windfall has come from renewed oil sales that generate few jobs.
Interior Minister Abdolreza Rahmani Fazli said 42,000 people had taken part in the unrest nationwide.
It was higher than a previous figure of 15,000 given by the head of the Revolutionary Guards, but still far below the hundreds of thousands that took to the streets during the last major protest movement in 2009.
Nuclear waivers
Trump must decide next week whether to continue waiving nuclear-related sanctions suspended under the 2015 nuclear deal between Iran and world powers.
Under the deal, Trump must actively lift certain sanctions every few months and the next deadline falls on January 12.
Trump's repeated tweets backing protesters during Iran's unrest was rebuffed by marchers on Friday.
"Mr. Trump passed laws against Iranians such as the immigration ban, and he called Iranians 'savages'... and suddenly he is sympathizing and supporting Iranians and it is ridiculous," said Khalili, a government worker in Tehran.
Source(s): AFP ,Reuters