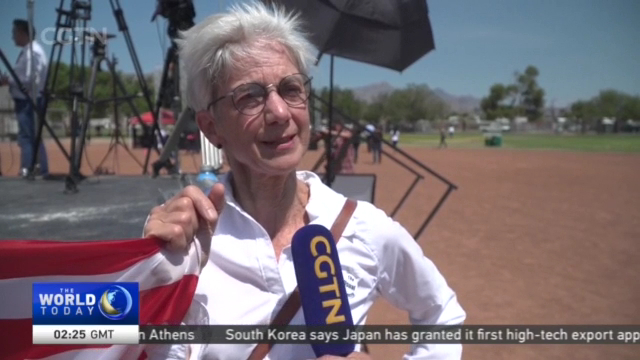 U.S. President Donald Trump has visited the two cities still reeling from the shock of last weekend's mass shootings. Trump met survivors, hospital staff and first responders in both El Paso, Texas and Dayton, Ohio. But his visits were not universally welcomed in either city. CGTN's Dan Williams has this report.
As U.S. President Trump left Washington to travel to grief-stricken cities Dayton and El Paso, the scene of two mass shootings over the weekend, a message to those calling for greater gun control. Trump said he would look to strengthen background checks for gun purchases.
DONALD TRUMP US PRESIDENT "I am looking to do background checks. I think background checks are important. I don't want to put guns into the hands of mentally unstable people or people with rage or hate, sick people."
But Trump also rejected criticism that his rhetoric stoked hate and violence.
DONALD TRUMP US PRESIDENT "I am concerned about the rise of any group of hate. I don't like it. Any group of hate, whether it's white supremacy, whether it's any other kind of supremacy."
Having witnessed one of the worst mass shootings in United States history, these El Paso residents made their feelings clear about President Trump's visit.
Many here say Trump is partly responsible for the atrocity, by suggesting his rhetoric on race and immigration is to blame for the mass shooting in El Paso.
VERONICA ESCOBAR TEXAS CONGRESSWOMAN "There have been words that have been powerful, and painful, and full of hate, and full of bigotry, and full of racism, and those words are still out there."
DAN WILLIAMS EL PASO "President Trump's visit to this predominantly Hispanic community has generated a strong reaction. Emotions are clearly running high following the attack. And protestors here say Trump is simply not welcome."
FERNANDO GARCIA, EXECUTIVE DIRECTOR BORDER NETWORK FOR HUMAN RIGHTS "We are not welcoming this president. He is not welcome because he is part of the problem. His rhetoric and his hate had created what we saw on Saturday."
"He may say he is coming to show respect but the words he uses are not respectful words."
There were similar scenes of protest in Dayton, Ohio, the scene of the weekend's second mass shooting. Trump met with survivors and first responders in both cities.
If nothing else, Trump has now seen the horror of the weekend's attacks for himself. Two visits thousands of kilometers apart both communities still deep in mourning. But also angry and demanding action. Dan Williams, CGTN, El Paso, Texas.
SITEMAP
EXPLORE MORE
DOWNLOAD OUR APP