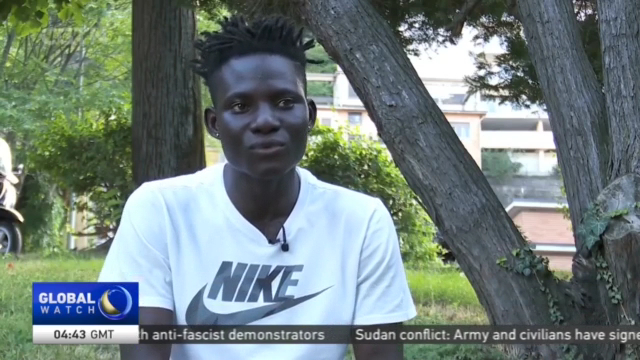 In Italy, while the government is toughening up on immigration, there are also some Italians who want to help those fleeing the horrors back home. As CGTN's Michal Bardavid reports from Milan, a group of doctors is working to support refugees who have endured unspeakable atrocities.
Twenty-four-year-old Mohammed lives in northern Italy. He escaped death in Libya, but still carries the scars both physical and psychological.
MOHAMMED TORTURE VICTIM "It's very hard, I have nightmares, I cannot sleep, I cannot even eat food, – I can just wake up in the midnight having some nightmare, thinking about what happened in the past."
Mohammed says militants tried to execute him in Libya.
MOHAMMED TORTURE VICTIM "They were supposed to cut my head, and I used my arm to block, that's why my hand is like that. It's making my life difficult, like even if I wanted to do small thing, because of my hand, right now I cannot do."
Doctor Massimo del Bene is a plastic surgeon at the San Gerardo Hospital of Monza. Together with his colleagues – they operate on torture victims. He has operated on Mohammed three times.
DR. MASSIMO DEL BENE SAN GERARDO HOSPITAL OF MONZA "Normally we treat cuts made by machetes, where the hand is almost amputated, crush injuries, fractures made by hammer, lesions from fire, from burns, they throw petrol on their hands and chest."
Del Bene explains that treating torture injuries is challenging.
DR. MASSIMO DEL BENE SAN GERARDO HOSPITAL OF MONZA "It is a medieval surgery we are not accustomed to. We were trained for a type of urgent and immediate surgical plastic repair. We were not trained for wounds that are three to four years old. This is a big problem."
MICHAL BARDAVID MILAN, ITALY  "For Dr del Bene, treating torture victims is not only about repairing deep physical injuries, it's also about giving his patients a second chance in life."
MOHAMMED TORTURE VICTIM "I really have hope for myself, even if it takes 10 operations I want to do it, because I really need my arm, I'm still young."
Hundreds of refugees, like Mohammed, have been trying to escape the horrors in Libya every year. Around 700 people have reportedly died trying to cross the Mediterranean in the first half of this year.
Since Italy's Interior Minister Matteo Salvini closed ports to migrants, many more are left with the decision to either stay or leave and risk dying at sea. Michal Bardavid, CGTN, Milan.
SITEMAP
EXPLORE MORE
DOWNLOAD OUR APP