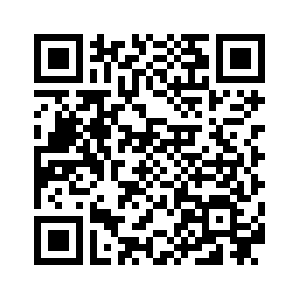 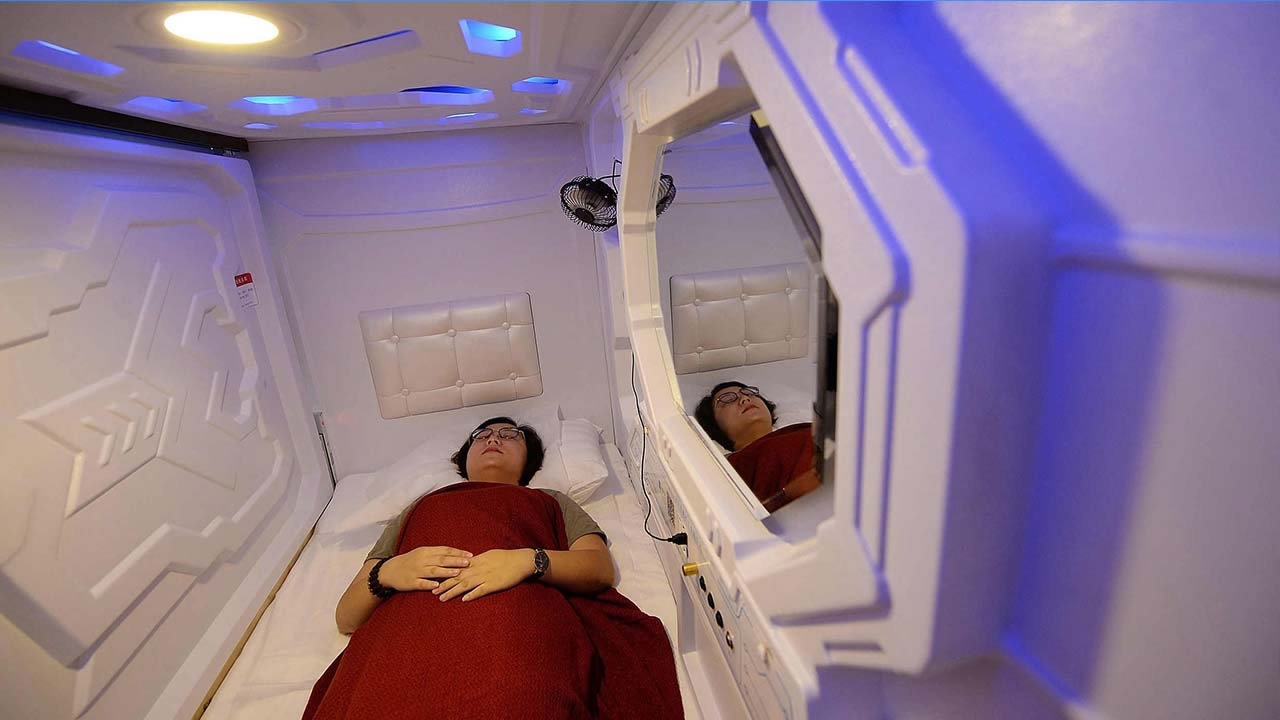 After scanning a QR code and forking out about one US dollar, you can take an-hour nap in a futuristic-looking hotel capsule. “Shared sleep cabins” is a fresh business model that has grabbed attention, after it was launched in cities like Beijing and Shanghai. But is the initiative being put to sleep?
As of last week, many operators of the two-meter-long, one-meter-wide capsules have shut down their businesses – less than half a year after being put in service.

Why are sleeping capsules being suspended? 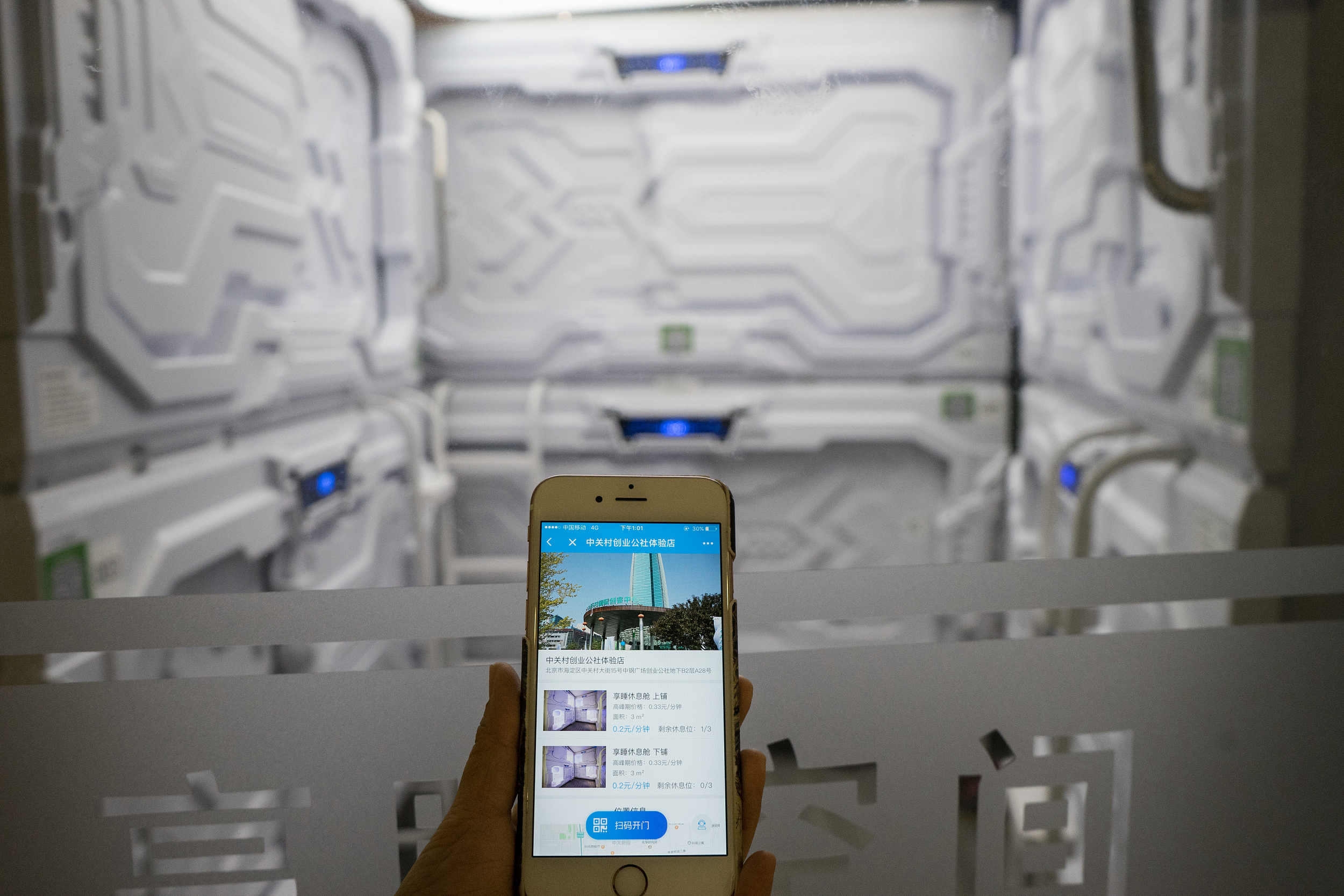 Police in Shanghai said that the “shared sleep rooms” were suspended in the city as their operators did not secure fire permits or hotel-running licenses, The Paper has reported. Under China’s regulations, hotel businesses have to obtain administrative permits related to fire safety, health and hygiene standards, among others.
One capsule hotel in Zhongguancun – a technology hub in Beijing – said they suspended their operations because of a system upgrade. The staff noted they were unaware of online reports that capsule hotels were closing their doors under police pressure. Instead, they said the company is upgrading its system, hence rooms are not available for rent at the moment. They did not mention how long it will take before they are back in service. 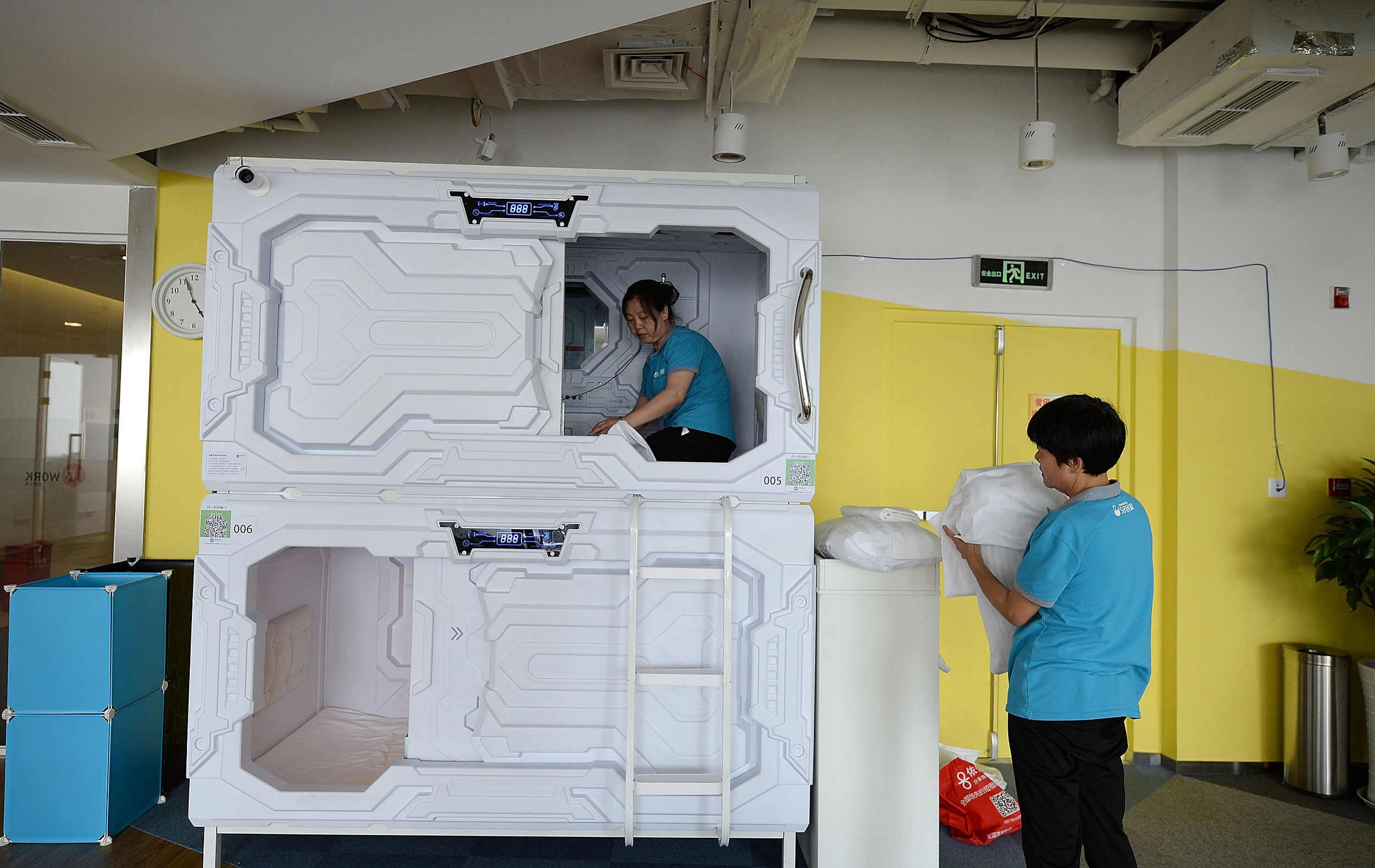 Changing sheets at a shared sleeping cabin in Chengdu on July 14, 2017. /VCG Photo

Changing sheets at a shared sleeping cabin in Chengdu on July 14, 2017. /VCG Photo

Aimed at providing a private and quiet place for a power nap, sleeping capsules are usually fitted in office buildings where many white collars often work extra hours.
Sleeping pods are stacked side-by-side with each capsule covering an area of about four square meters. It provides customers with disposable bedding, an electric fan, reading light as well as charging sockets.
A man surnamed Guo, an IT worker in Zhongguancun, told Beijing Morning Post that he benefits a lot from the service since he does not have to sleep on his desk any more after long hours of nonstop work.
“I like it. I often come for a one-hour sleep at around 3 p.m. as there are too many people around noon,” he said.
However, others have complained that the rooms could be stuffy and needed better sound insulation and ventilation. Some are also worried about the leakage of personal information. 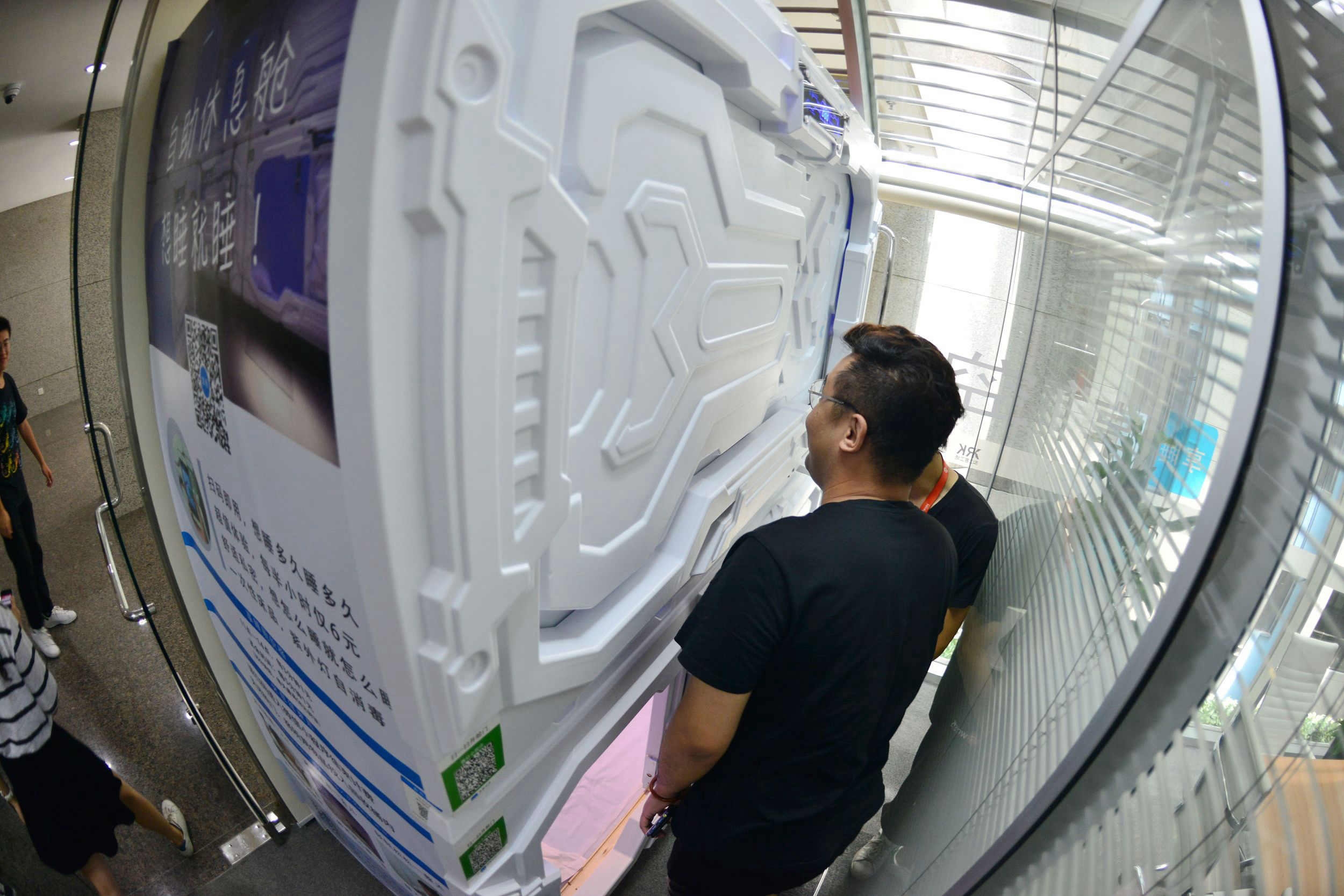 Debate has also raged about whether such rooms are the newest addition to China's booming sharing economy models or a modern twist to the traditional hospitality businesses.
“What defines shared sleep businesses is a platform where people can rent their unoccupied houses to others. In essence, the current so-called ‘shared sleep capsules’ is still a hotel business. Therefore, it needs to pass all the regulations in this sector so as to safeguard the health and safety of the customers,” said Zhu Wei from the Internet Society of China.
For Dai Jiangong, CEO of Sleepace – one of the companies that launched the service, they are not hoteliers.
“We launched this service because we want to provide some place for people to take a short nap. That’s all. We are not renting rooms or running a hotel,” Dai said in an interview with Legal Daily. 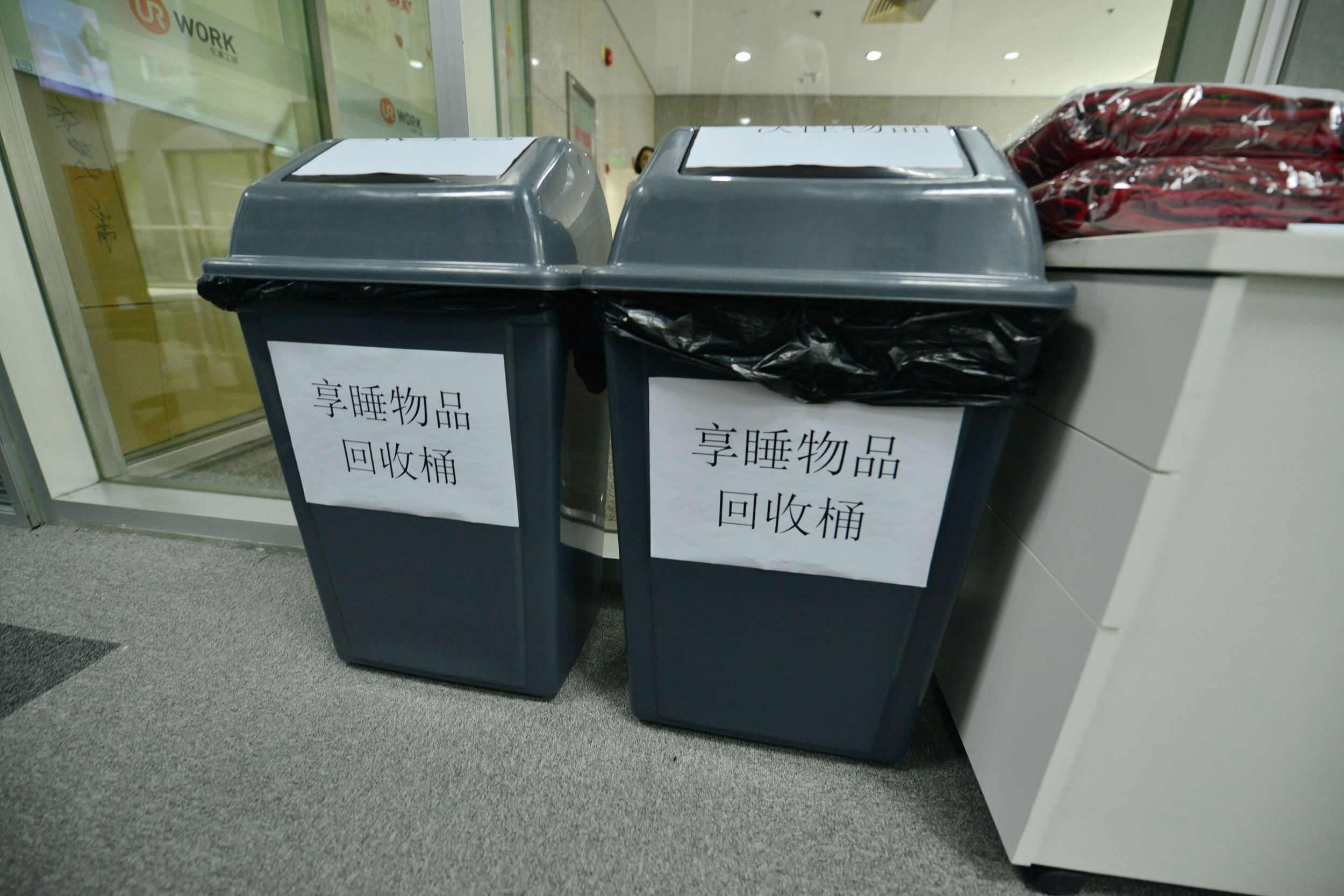 Dustbins outside a business for shared sleep cabins in Shanghai on July 12, 2017. /VCG Photo

Dustbins outside a business for shared sleep cabins in Shanghai on July 12, 2017. /VCG Photo

Operators of such businesses told the media that the capsules are still in their experimental stage and have not been gone large-scale expansion yet.
Media reports said about 100 capsules have been put in service in Beijing, Shanghai and Chengdu over the past six months, and around 10,000 people have enjoyed such service.
The companies said that during the suspension period, they will upgrade their systems and communicate with relevant departments in order to better meet customers’ demands and government regulations.