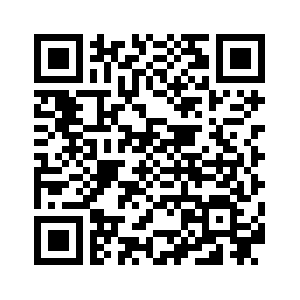 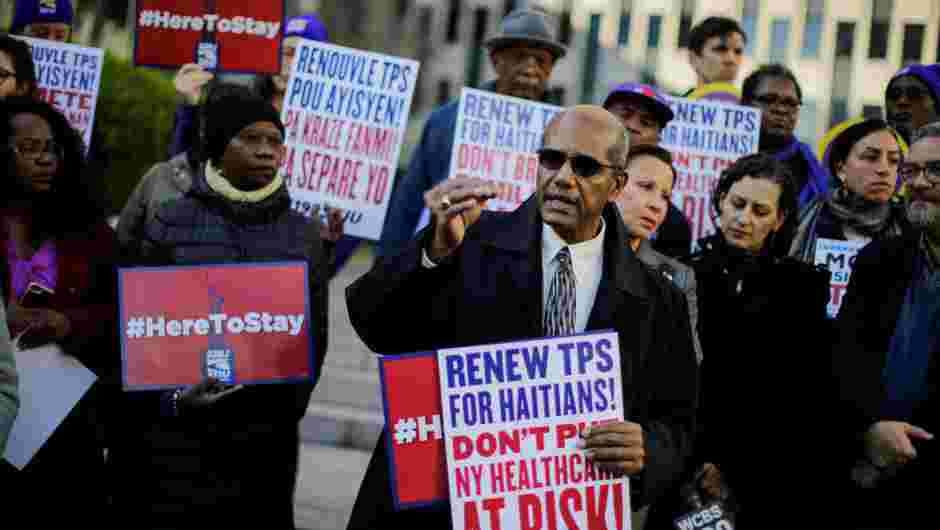 ‍As one of the world’s poorest nations, Haiti is not unaccustomed to having derogatory things said about it.
But not by the president of the United States.
Donald Trump’s alleged characterization of the world’s oldest black republic as a “shithole” nation last week has predictably been met with outrage.
Just last month, it was also reported by the New York Times that Trump complained in a meeting last June that Haitians “all have AIDS,” a remark the White House has since disputed.
And in November, The Trump administration announced that in July 2019, it will end a special status given to about 59,000 Haitian immigrants that protects them from deportation after a devastating 2010 earthquake in the Caribbean nation.
Haitians must be feeling pretty unloved by Trump right now, but that’s not the message he tried to portray in a Friday tweet in which he denied saying "anything derogatory about Haitians other than Haiti is, obviously, a very poor and troubled country."
"Never said 'take them out.' Made up by Dems. I have a wonderful relationship with Haitians,” he tweeted. 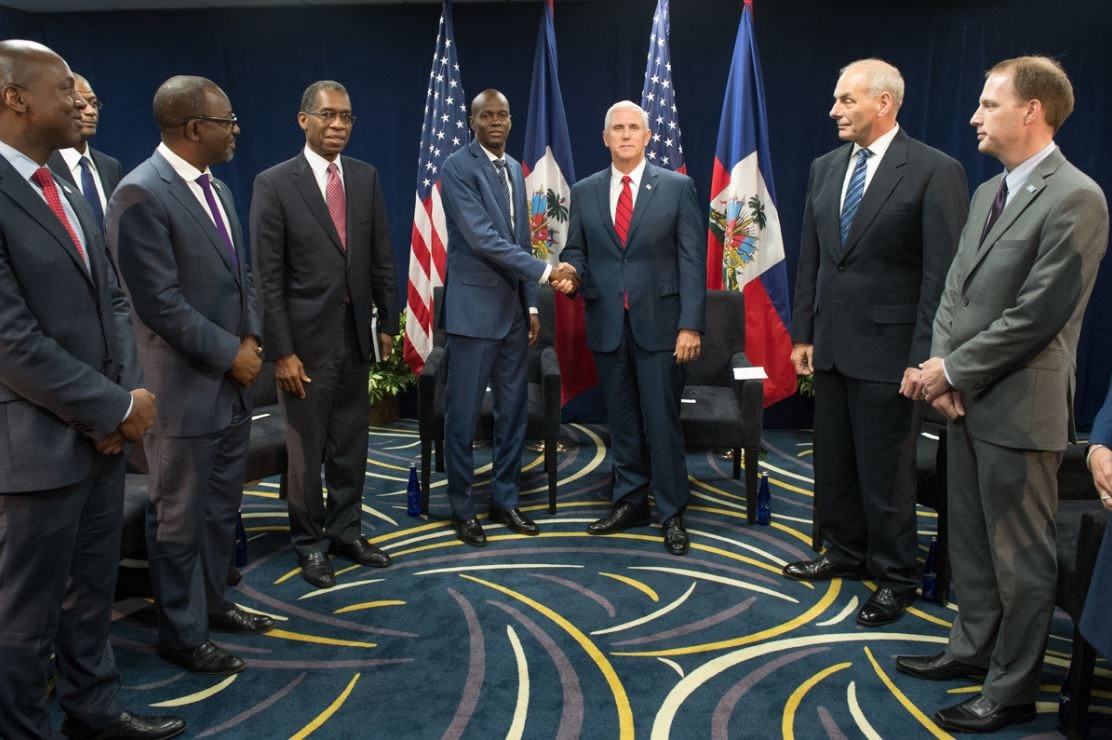 But the damage had been done and in Haiti itself, the government denounced what it called a “racist” view of Haitian immigrants.
“The Haitian government condemns in the strongest terms these abhorrent and obnoxious remarks which, if proven, reflect a totally erroneous and racist view of the Haitian community and its contribution to the United States,” it said in a statement.
It also summoned the top American diplomat in the country for an explanation.
What was frustrating for many Haitians is that the ruckus occurred as the country and its diaspora prepared to mark the eighth anniversary of the quake that killed more than 200,000 people.
Haiti’s ambassador to Washington, Paul Altidor, said it was distressing that attention was drawn to the comments on the anniversary.
“It’s shocking he would say it on the anniversary,” 28-year-old Natacha Joseph, who was selling rice and beans from a basket near the general hospital in downtown Port-au-Prince, told AP. “I will ask Jesus to protect Haiti from the devil, and Trump is the devil.” 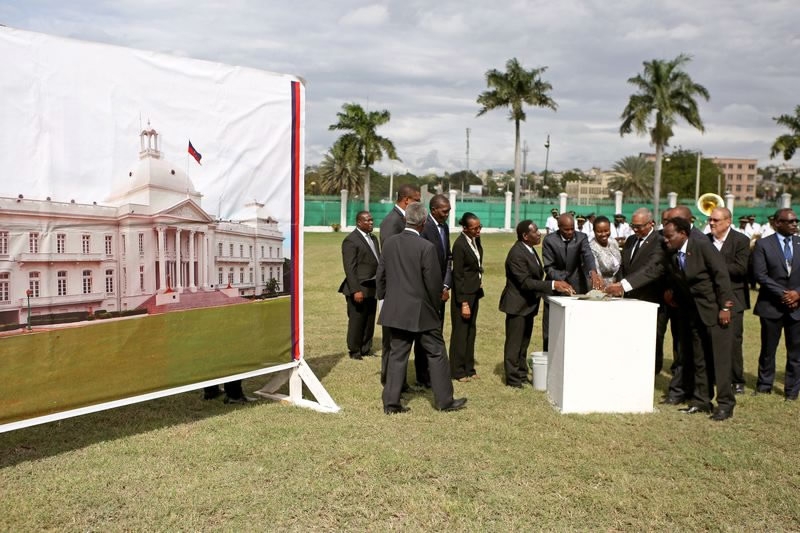 Haiti’s President Jovenel Moise and first lady Martine Moise laying the first brick on Friday for the reconstruction of the presidential palace in Port-au-Prince after it was destroyed in the 2010 earthquake. /Reuters  Photo

Haiti’s President Jovenel Moise and first lady Martine Moise laying the first brick on Friday for the reconstruction of the presidential palace in Port-au-Prince after it was destroyed in the 2010 earthquake. /Reuters  Photo

In Miami, which has a sizable population of Haitian immigrants, a march to commemorate the anniversary and remember the dead on Friday was overshadowed by Trump’s comments.
“Isn’t it sad?” Marleine Bastien, a South Florida Haitian activist told the rally. “We should be here remembering our brothers and sisters, but instead we’re answering to President Trump.”
Trump was in a closed meeting with members of Congress to discuss immigration on Thursday when he reportedly questioned why the US would accept more people from Haiti and “shithole countries” in Africa, rather than places like Norway.
Despite the president's apparent denial of the vulgar reference, Democratic US Senator Dick Durbin, who attended the White House meeting, told reporters Trump used “vile, vulgar” language, including the word “shithole”.
The pending loss of Temporary Protected Status (TPS), which has plunged the Haitian immigrant community in the US into uncertainty, was also taken up at the march.
“We are calling for the immediate reinstatement of TPS for Haiti now that all the emperor’s clothes have been stripped away and we see what is at the heart of immigration policy –  keeping this nation for white people and saying to black immigrants ‘go to hell’,” said Steve Forester of the Institute for Justice and Democracy in Haiti.
TPS is an immigration status that offers people who are from countries affected by war or natural disaster temporary relief from deportation and allows them to work. 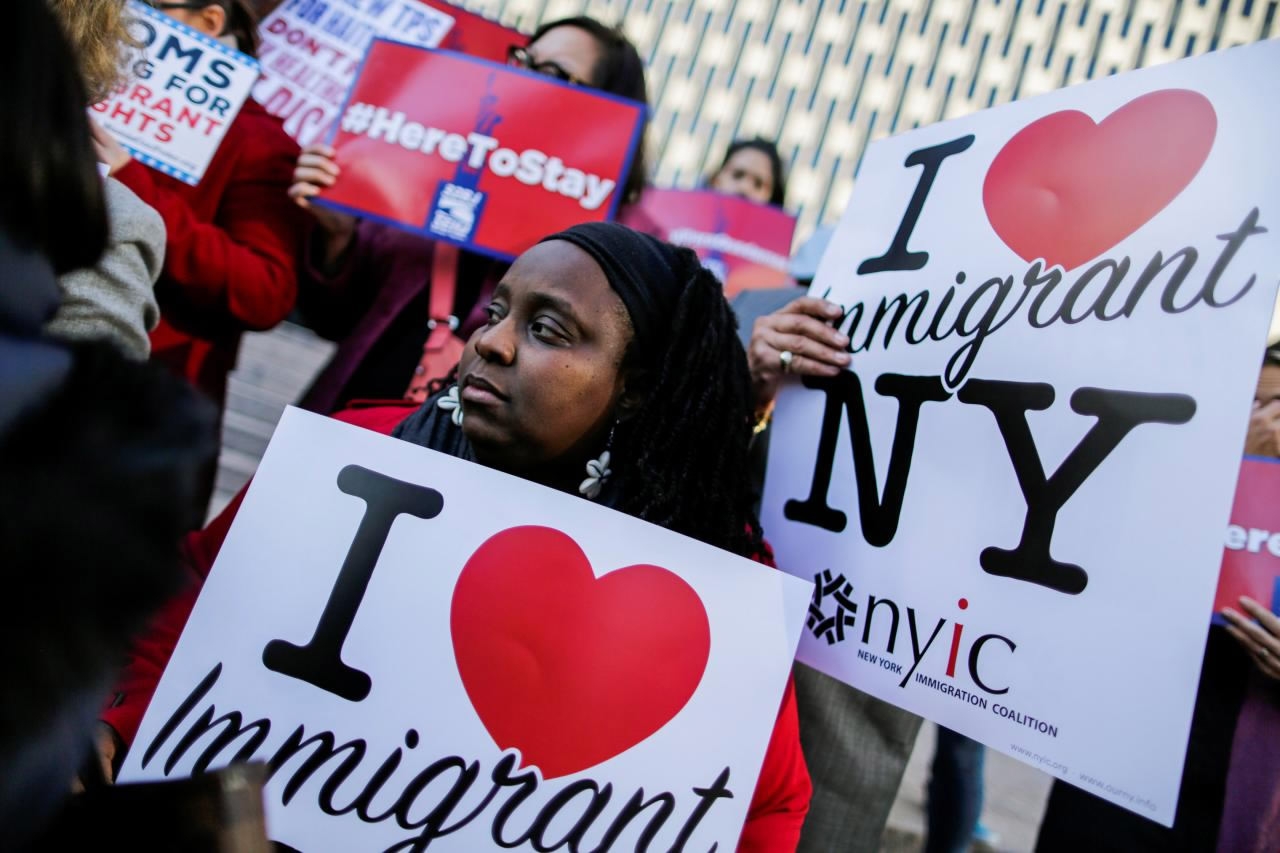 Haitian immigrants and supporters rally to reject a Trump administration decision to terminate TPS for Haitians, at the Manhattan borough in New York, on November 21, 2017. /Reuters Photo

Haitian immigrants and supporters rally to reject a Trump administration decision to terminate TPS for Haitians, at the Manhattan borough in New York, on November 21, 2017. /Reuters Photo

Trump was meeting with lawmakers in a bid to gain bipartisan support for an immigration deal that would possibly restore TPS for Haiti and other nations.
Supporters of the program say Haitians make valuable contributions to the US economy , and that the impoverished nation is not ready to take back tens of thousands of people.
Critics say that by its very name it was never meant to be a long-term program and is due for termination.
Overall, there were 676,000 Haitian immigrants in the United States in 2015, up from 587,000 in 2010, the year of the earthquake, according to the Washington-based Migration Policy Institute. That number accounts for less than 2 percent of the US foreign-born population, it said.
Haitian immigrants are also reminding Trump of a promise he made during his presidential campaign when he went to Little Haiti in Miami and told a small group of Haitian Americans that he wanted to be their “biggest champion.”
Free nation
"The Haitian people deserve better," he said in September 2016. "That is what I intend to give them. I will give them better."
Despite their country's position as the poorest in the Americas, Haitians are very proud of their role in the history of the hemisphere.
Its 1791 revolution against French rule was the first slave revolt to lead to a free nation, in 1804, making it the second country in the Americas to win independence, after the United States.
And Friday's Haitian government statement also cited history, noting that Haitian soldiers fought on the American side against the British in the 18th century Revolutionary War and in the War of 1812.
“The relationship between the two countries has been strengthened by the fact that millions of sons and daughters of Haiti have contributed and will continue to contribute to the prosperity and greatness of America,” it said.