2017: Trump’s ‘huge’ year in the war of words on Twitter
By Jasmine Cen 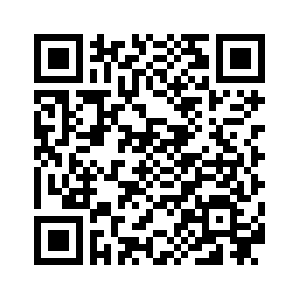 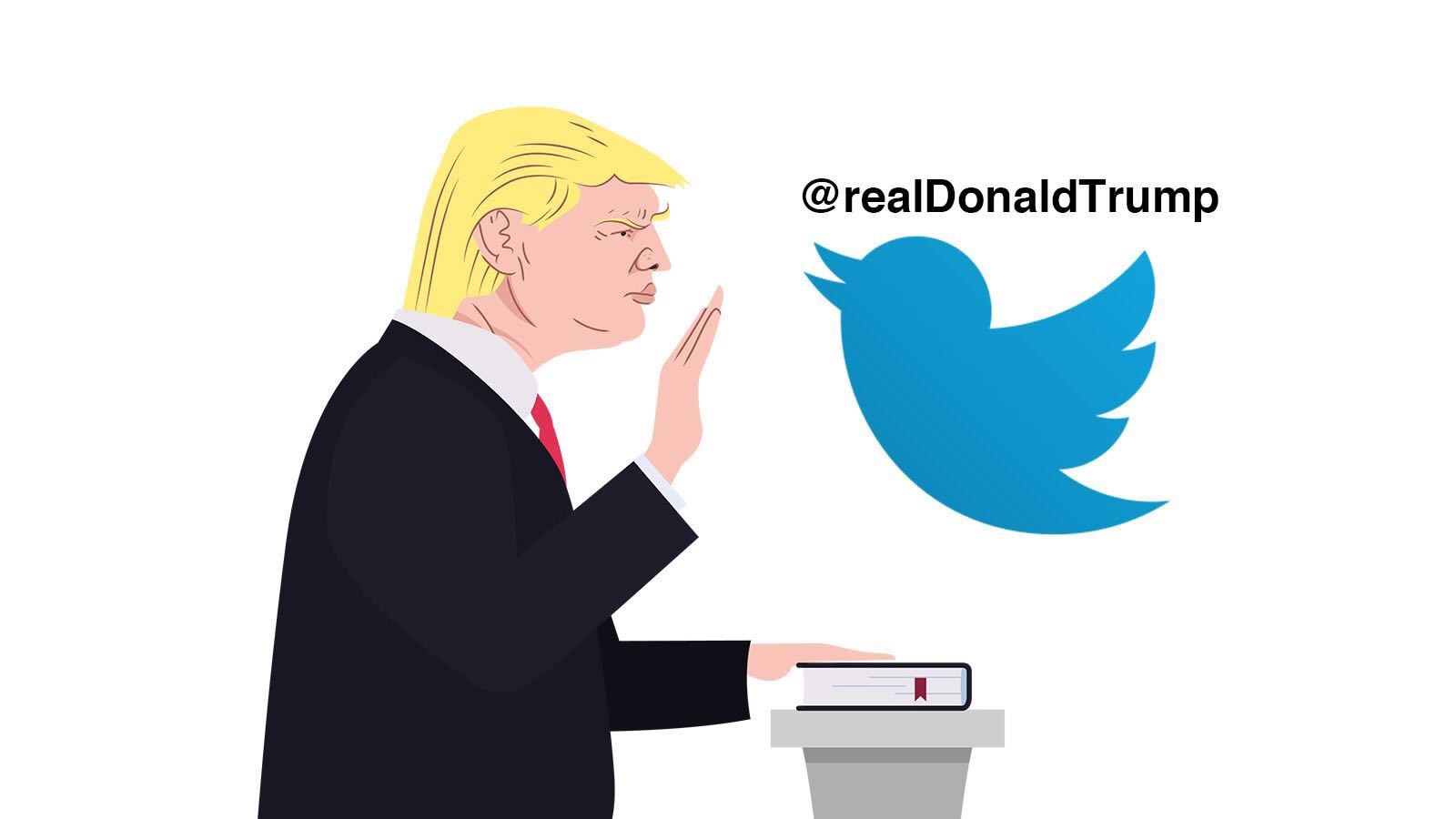 An unscripted moment in politics can be dangerous, but US President Donald Trump may be the outlier, as he seems to take pride in his spontaneous Twitter interactions with the outside world.
While Trump mostly relies on his national security and communications teams to craft his speeches, he has also infamously used Twitter to directly communicate with constituents, and the world.
“My use of social media is not Presidential - it’s MODERN DAY PRESIDENTIAL. Make America Great Again,” tweeted Trump in July. 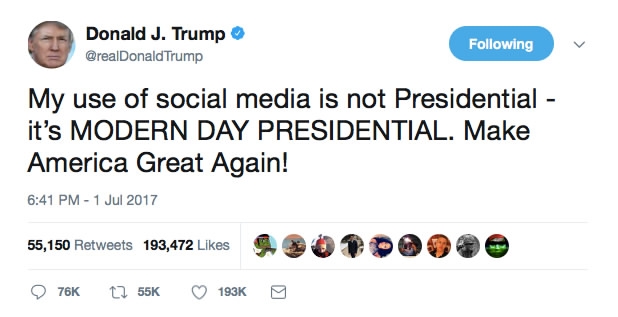 Trump's tweets from the Oval Office have often been controversial – in some cases, undermining diplomatic efforts or sparking international incidents.
We've reviewed some of Trump's most unexpected and frequently used words in 2017 – and the social media spats that ensued.

President Donald Trump has frequently used these words to magnify the size of a crowd or the impact of an event.
Ahead of his inauguration, Trump tweeted: “Inauguration Day is turning out to be even bigger than expected. January 20th, Washington D.C. Have fun!” 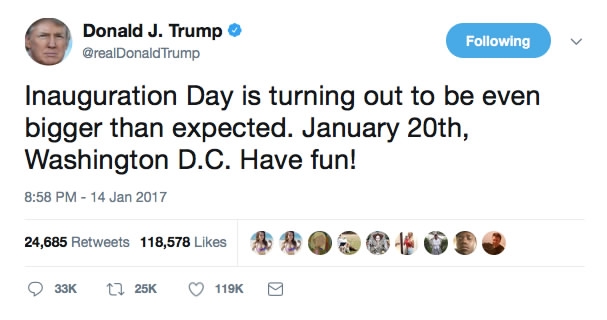 Trump ordered Sean Spicer, then White House Press Secretary, to defend the size of the inauguration crowd, leading to Spicer being toasted by the media.
“It was the total largest audience witnessed in person and around the globe,” said Spicer as he stood by the inauguration claim.

Fake news is the term Trump uses to attack certain media outlets. Trump claimed he invented the phrase, but it was later denied by experts.
“One of the greatest of all terms I've come up with (for the media), is 'fake,'" Trump told Mike Huckabee in an interview on the Trinity Broadcasting Network.
CNN, Buzzfeed, MSNBC and the New York Times have been referred to as fake news in his tweets multiple times.
CNN has been the target of many of Trump's fake news tweets. “Great, and we should boycott fake news CNN. Dealing with them is a total waste of time,” Trump tweeted in November. 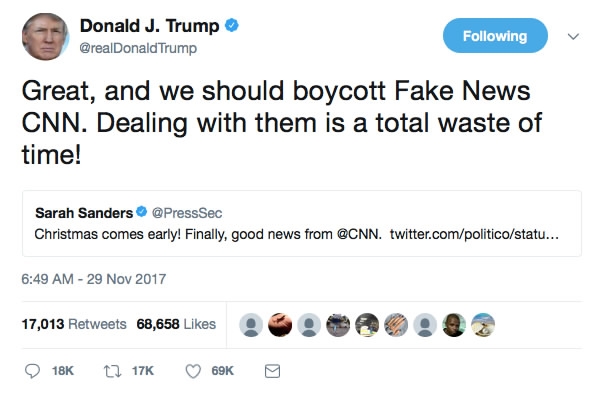 CNN has often been the target of Trump's accusations of fake news outlets. / Screenshot from Trump's official Twitter account.

CNN has often been the target of Trump's accusations of fake news outlets. / Screenshot from Trump's official Twitter account.

When Trump was still President-elect, he called out CNN during a press conference. Pointing to a reporter from CNN, Trump shook his head and said, “Not you. Your organization is terrible!”

A new term created by President Trump in 2017 left the world puzzled after a midnight tweet in May.
“Despite the constant negative press covfefe,” Trump tweeted.

The media went wild trying to guess the definition and pronunciation of the word.
Later, Trump deleted the previous post and followed up with “Who can figure out the true meaning of covfefe??? Enjoy!” The true meaning of the word remains a mystery.
“The president and a small group of people know exactly what it meant,” said the former White House Press Secretary Spicer.

The Democratic People's Republic of Korea (DPRK) and the United States engaged in regular rhetorical spats in 2017.
A fan of hyperbole, Trump warned the DPRK in August that “they are going to be met with fire and fury like the world has never seen.”

Tensions escalated through the year as the DPRK test-fired a series of missiles, prompting Trump to give DPRK leader King Jong Un the nickname "Rocket Man." 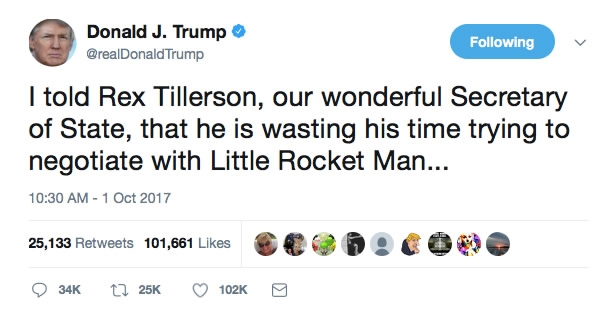 In September, DPRK Foreign Minister Ri Yong Ho took the stage at the United Nations General Assembly meeting and lashed out at Trump.
“During his eight months in power, he has turned the White House into a noisy marketing place full of crackling sound...and now he tries to turn the UN arena into a gangster nest,” said Ri.
On the same day, Trump responded at a rally in Alabama: “We can’t have a mad man out there shooting rockets all over the place. Rocket man should’ve been handled a long time ago.”

In May 2017, Robert Mueller was appointed special counsel to investigate allegations of possible coordination between the Trump campaign and Russia during the 2016 US presidential election.
Trump’s former National Security Adviser, Michael Flynn, was the first senior White House official to plead guilty in the investigation.
In his first on-camera comment on Flynn’s guilty plea, as well as his tweet, Trump responded with: “No collusion, no collusion. There has been absolutely no collusion.”

According to CNN, the investigation should conclude by early 2018. However, with recent claims that Mueller has acquired information from Deutsche Bank linking to Trump, legal experts are anticipating that the investigation to be longer.
At the end of 2017, Trump said his Christmas wish was for a peaceful America.
“I think we want peace. What do you think? Peace for the country. We’ve got prosperity. Now we want peace,” tweeted Trump.
And who knows, maybe the public can expect a more peaceful year on Trump’s Twitter in 2018.