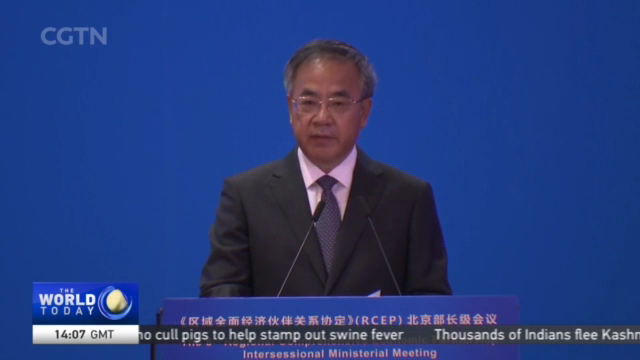 Negotiations have just wrapped up for a proposed free trade deal between Southeast Asian nations and six major partners -- including China, India and Japan.
Leaders say important progress was made over two days of talks in Beijing.
Chinese Vice Premier Hu Chunhua is now urging all parties to complete negotiations this year. Our reporter, Wang Hui, has the details.
It is the first time a ministerial-level RCEP meeting has been held in China.
Over the course of two days, participants concluded talks in the areas of finance, telecommunications, and other professional services. Overall, more than two-thirds of the negotiations around market access have been finalized since 2012. And, more than eighty percent of the entire agreement's wording has already been reached.
While addressing the opening ceremony of the event, Chinese Vice Premier Hu Chunhua said significant progress has been made. But, he added that some of the differences between states are tough and sensitive to negotiate.
Regarding market access, Hu says goods, investment and services are the core areas up for discussion. He spoke about China's proposals in this regard.
HU CHUNHUA, CHINESE VICE PREMIER "Forming an integrated, regional and major market is our common goal. While opening up our own markets, we will also gain the opportunity to access other member states' markets. We hope each party thinks in the long-term, and based on the general balance, facilitates our work creatively and takes a more flexible stance. This is so we can reach an agreement that can create the biggest benefits for each member."
In terms of making rules, Hu says member countries still have big differences in e-commerce, investment, and intellectual property rights. Hu is urging members to seek common ground.
HU CHUNHUA, CHINESE VICE PREMIER "On those sensitive issues relevant to national security, we hope all parties can understand one another, fully take care of others' concerns, and try to find more pragmatic and flexible solutions. On purely economic and technological issues, we hope members can decrease market barriers, facilitate trade and investment, and coordinate different stances by referring to international standards."
RCEP was initiated in 2012 by ASEAN. The negotiating parties include the ten ASEAN countries and another six nations: China, Japan, South Korea, Australia, New Zealand and India.
It aims at establishing an integrated regional market, by cutting tariffs and reducing non-tariff barriers among members.
Prior to Saturday's meeting, they have held twenty-seven rounds of negotiations, fifteen rounds of ministerial-level meetings, and two summits. The top leaders of the sixteen countries have decided to finish the negotiations by the end of this year. So, it's in the final stages of negotiations.
WANG HUI BEIJING "The RCEP member states account for more than three-point-five billion people, nearly half OF the world's population. They contribute to about thirty-two percent of global GDP, and nearly thirty percent of the world's foreign trade. When the agreement is reached, it will facilitate the convergence of the local industrial chain and value chain, and allow for the integration of the regional economy. Wang Hui, CGTN, Beijing."
SITEMAP
EXPLORE MORE
DOWNLOAD OUR APP