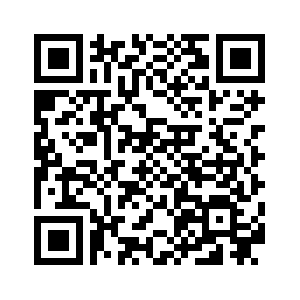 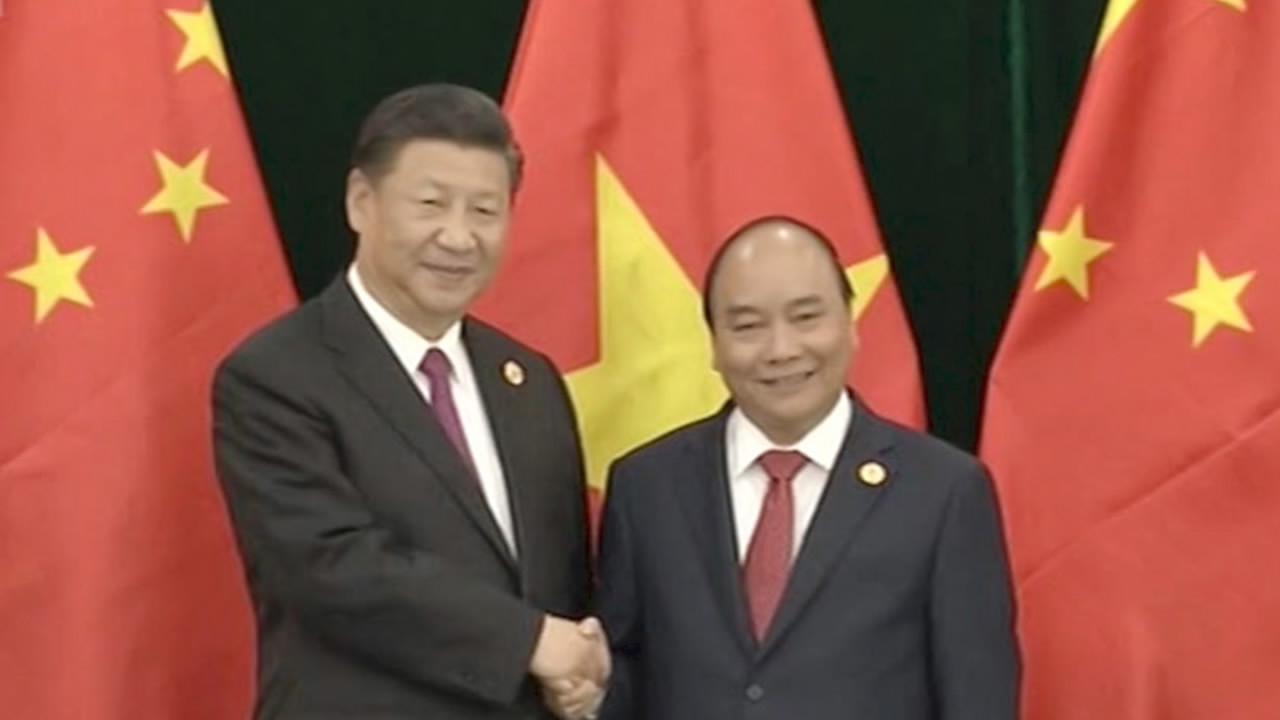 Chinese President Xi Jinping urged China and Vietnam to extend the breadth and depth of their comprehensive strategic cooperation, while meeting with Vietnam Prime Minister Nguyen Xuan Phuc Saturday on the sidelines of the Asia-Pacific Economic Cooperation (APEC) Economic Leaders' Meeting in Da Nang, Vietnam.
Xi also extended his sincere condolences over the heavy casualties and property loss caused by Typhoon Damrey in southern and central Vietnam, saying that China will support Vietnam's rescue and relief efforts.
He stressed that under the leadership of the Communist Party of Vietnam (CPV) and the Vietnamese government, people in the affected areas will certainly be able to overcome the disaster and resume normal work and life as soon as possible.
Xi will fly to the Vietnamese capital of Hanoi on Sunday to start his state visit to the country.
He expressed satisfaction on the current development momentum of China-Vietnam ties, which now feature frequent high-level visits, deepening practical cooperation, vigorous people-to-people exchanges and close coordination on multilateral occasions. 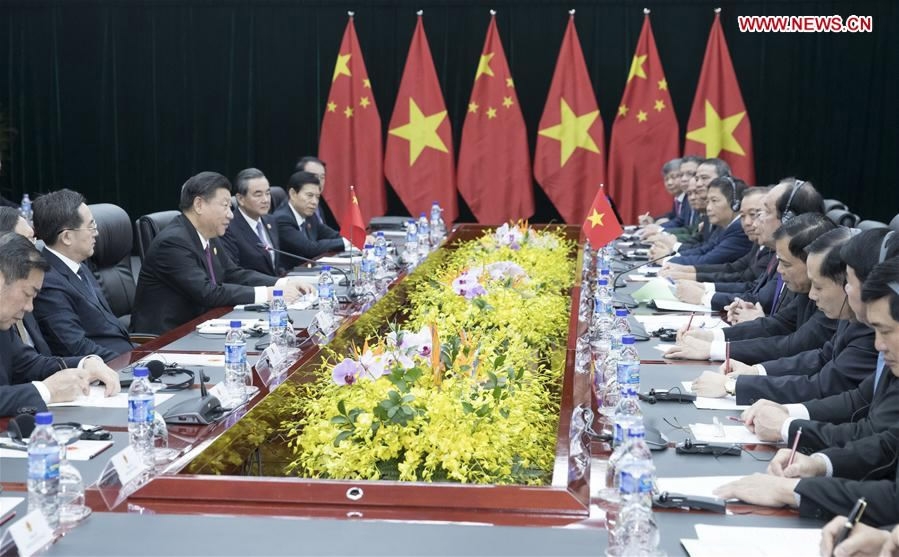 China attaches great importance to ties with Vietnam, said Xi, adding that he hopes to have in-depth exchanges of views with Vietnamese leaders on relations between the two parties and the two countries as well as issues of common concern, so as to open a new chapter for the two countries' comprehensive strategic cooperative partnership.
The international and regional patterns are undergoing profound and complicated changes, while the reform and development of China and Vietnam are also at a crucial period, said Xi.
He suggested the two sides expand the breadth and depth of their comprehensive strategic cooperation and realize lasting peace and stability of the two socialist countries led by Communist parties.
China and Vietnam should maintain high-level contacts, strengthen strategic communication, and deepen experience sharing on party and state governance, he said.
He called on the two countries to speed up the alignment of their development initiatives -- the China-proposed Belt and Road Initiative and Vietnam's "Two Corridors and One Economic Circle" plan  and deepen cooperation in such areas as economy and trade, finance, production capacity and infrastructure construction, so as to achieve mutual beneficial and win-win results.
The Chinese president called for more dynamic people-to-people exchanges to promote mutual understanding and friendship between peoples of the two countries.
He also suggested that both sides properly deal with divergences to ensure the relations between the two parties and the two countries always move forward along the right direction. 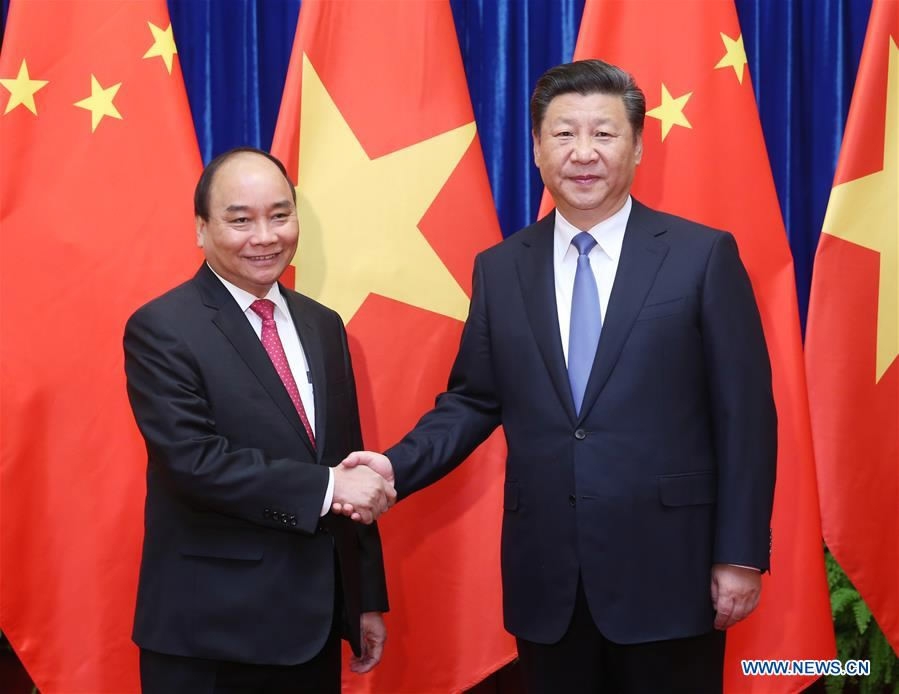 For his part, Phuc thanked Xi for choosing Vietnam as his first overseas destination after the 19th National Congress of the Communist Party of China (CPC).
He also extended warm congratulations on the elevation of Xi Jinping Thought on Socialism with Chinese Characteristics for a New Era into the Party's guiding principles during the landmark congress and on Xi's re-election as general secretary of the CPC Central Committee.
Vietnam cherishes the traditional friendship with China and is happy to see the success of China's economic and social development, which Vietnam views as great achievements of socialist construction, said Phuc.
To upgrade Vietnam-China relations is the priority of Vietnam's foreign policy, he said, adding that Vietnam hopes to enhance cooperation with China in such fields as investment, trade, production capacity, science and technology, agriculture, electricity, infrastructure and the construction of cross-border economic cooperation zones.
Vietnam is committed to enhancing the level of bilateral cooperation, said Phuc, noting that Vietnam would dock its "Two Corridors and One Economic Circle" plan with the China-proposed Belt and Road Initiative and beef up cooperation with China in tourism, culture and local affairs.
The current overseas trip is Xi's first after the 19th CPC National Congress. After attending the APEC meeting in Da Nang, Xi will pay state visits to Vietnam and Laos from Sunday to Tuesday.
The APEC is a regional economic forum established in 1989 to leverage the growing interdependence of the Asia-Pacific. This year's APEC Economic Leaders' Week is held under the theme of "Creating New Dynamism, Fostering a Shared Future."
2771km
Source(s): Xinhua News Agency