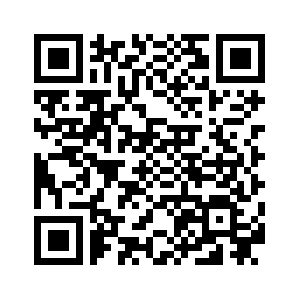 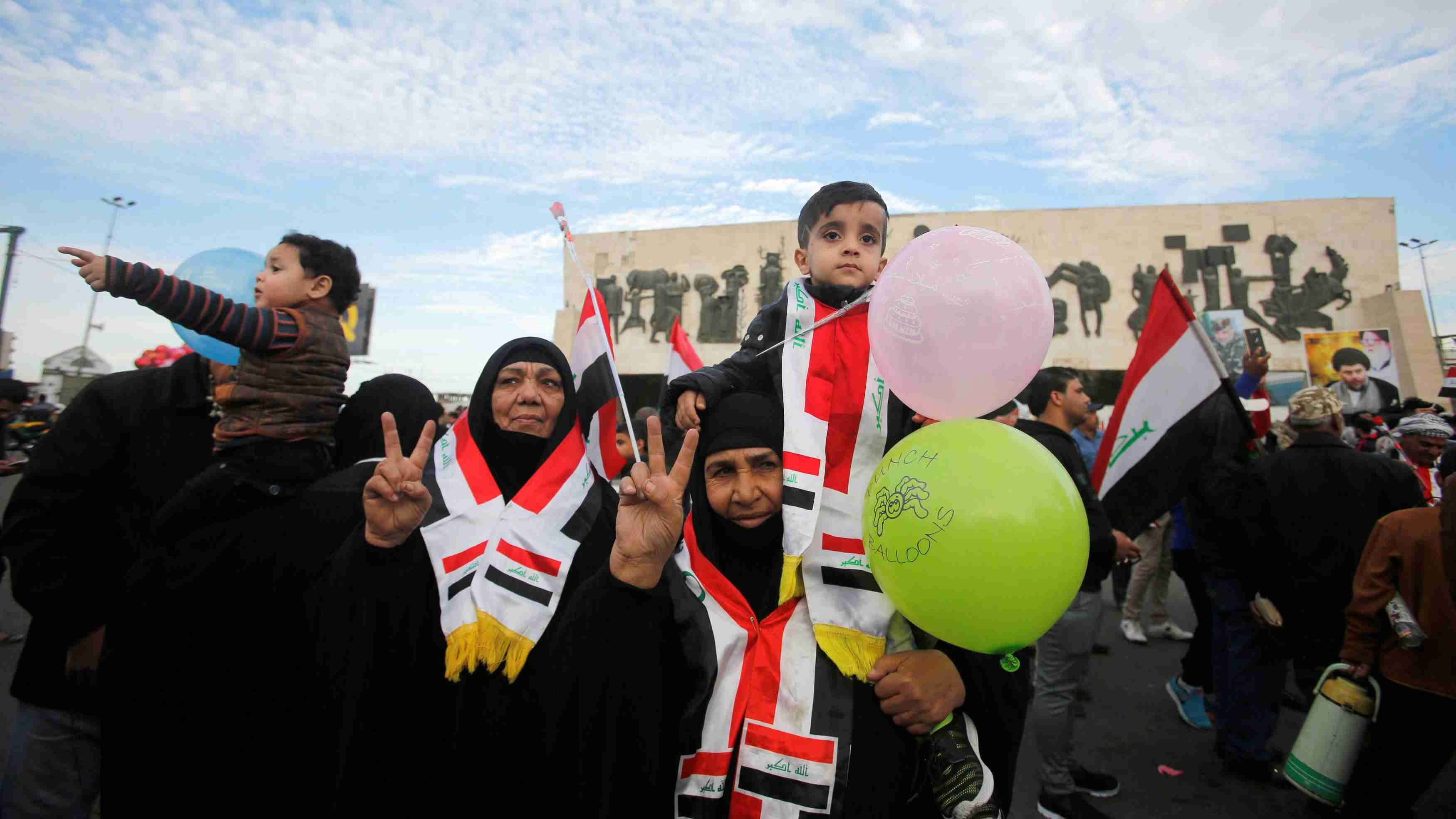 Below are the top 10 risks, which in my view, the Middle East faces in 2018 – starting with the lowest and ending with the highest. My ranking is based on the probability of the event happening, multiplied by the potential impact on the region’s stability.
10. Another Palestinian intifada: US President Donald Trump recognizing Jerusalem as Israel’s capital already angered the Palestinians. This year, another trigger, be it a declaration to expand settlements or a clash in which numerous Palestinians are killed could trigger another. Although the chances for now seem low, the possibility of another intifada can not altogether be dismissed. Furthermore, no one knows who will be the successor of veteran 82-year-old Palestine Liberation Organization leader Mahmoud Abbas.
9. Al Qaeda making a military return in Syria and Iraq: According to various reports, while the focus was on ISIL, Al Qaeda has been rearming and retraining, especially in Syria. A militarily revitalized Al Qaeda could make the job of returning calm to Syria even more difficult, due to the organization’s radical jihadist ideology. The group could also increase its terror activities in Iraq, especially if the Iraqi government does not start rebuilding and reinvesting in Sunni areas liberated from ISIL. 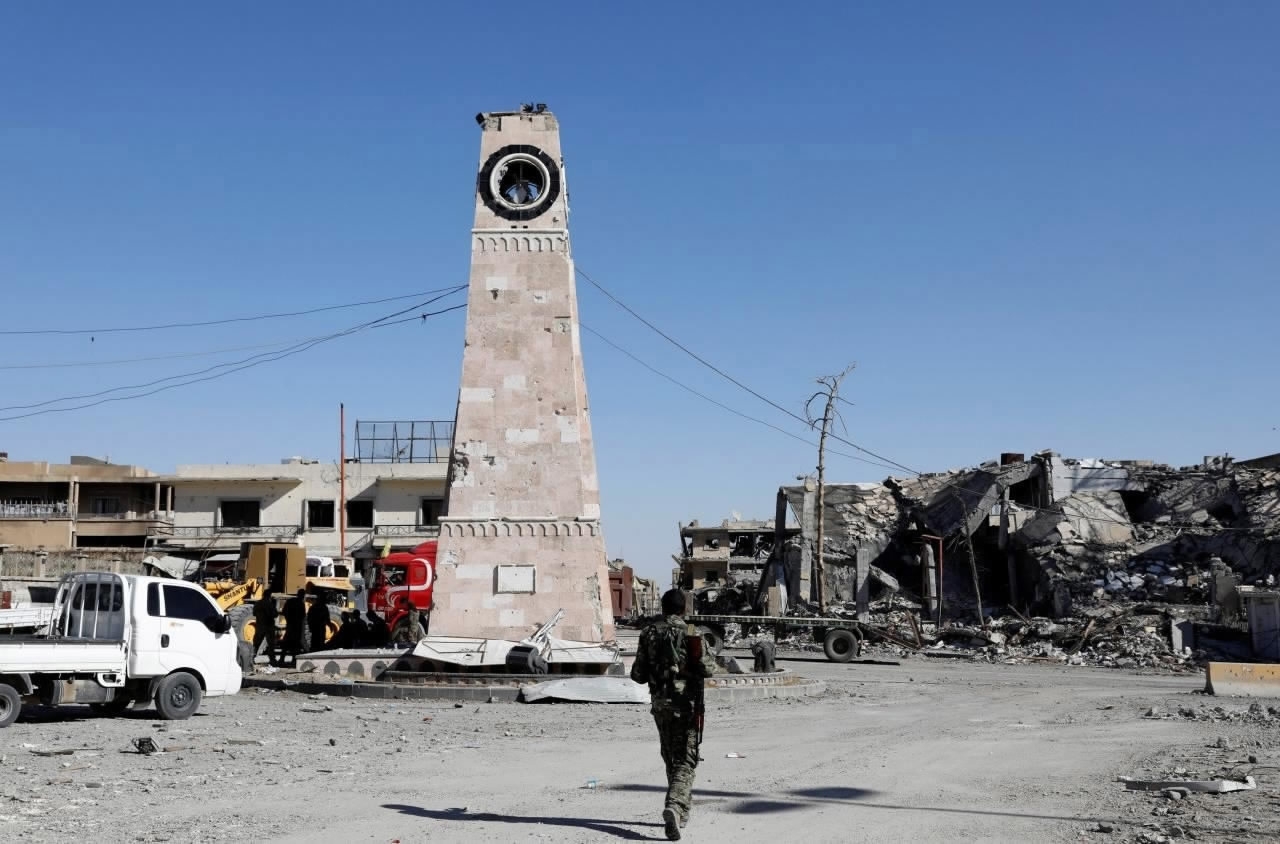 8. ISIL's Wilayat Sinai group in Egypt's Sinai Peninsula launches more devastating attacks against Egyptian targets: This group recently carried out an underreported failed assassination attempt against Egyptian Interior Minister Magdy Abdel-Ghaffar by blowing up his helicopter while it was on the tarmac. This attack came after a devastating attack against a mosque this November, which killed more than 300 people as well as the bombing of a Russian airliner in October 2016 that killed 224 people. The high level of military-style planning and intelligence used by this group, and its jihadist ideology, risks more instability, and the involvement of Egyptian and neighboring Israeli forces to contain it.
7. An Israel-Hamas war: This is a question of when, not if. And there have been ample warnings that the conditions are ripe for another round of conflict between the two sides. A new war between the two sides next year could impact the Palestinian and Israeli economies while ratcheting up tensions between Israel and Iran. Iran has backed Hamas’ military wing and the Palestinian Islamic Jihad in the past, and has recently repeated this promise.
6. Disturbances in Saudi Arabia: For now, the sweeping reforms of Saudi Arabia’s Prince Mohammed bin Salman seem to have the backing of the country’s youth. However, there is also opposition, and the latter could rise should his reforms hit serious obstacles, and/or if he makes too many enemies inside the halls of power in Saudi Arabia owing to his fast and furious reforms. 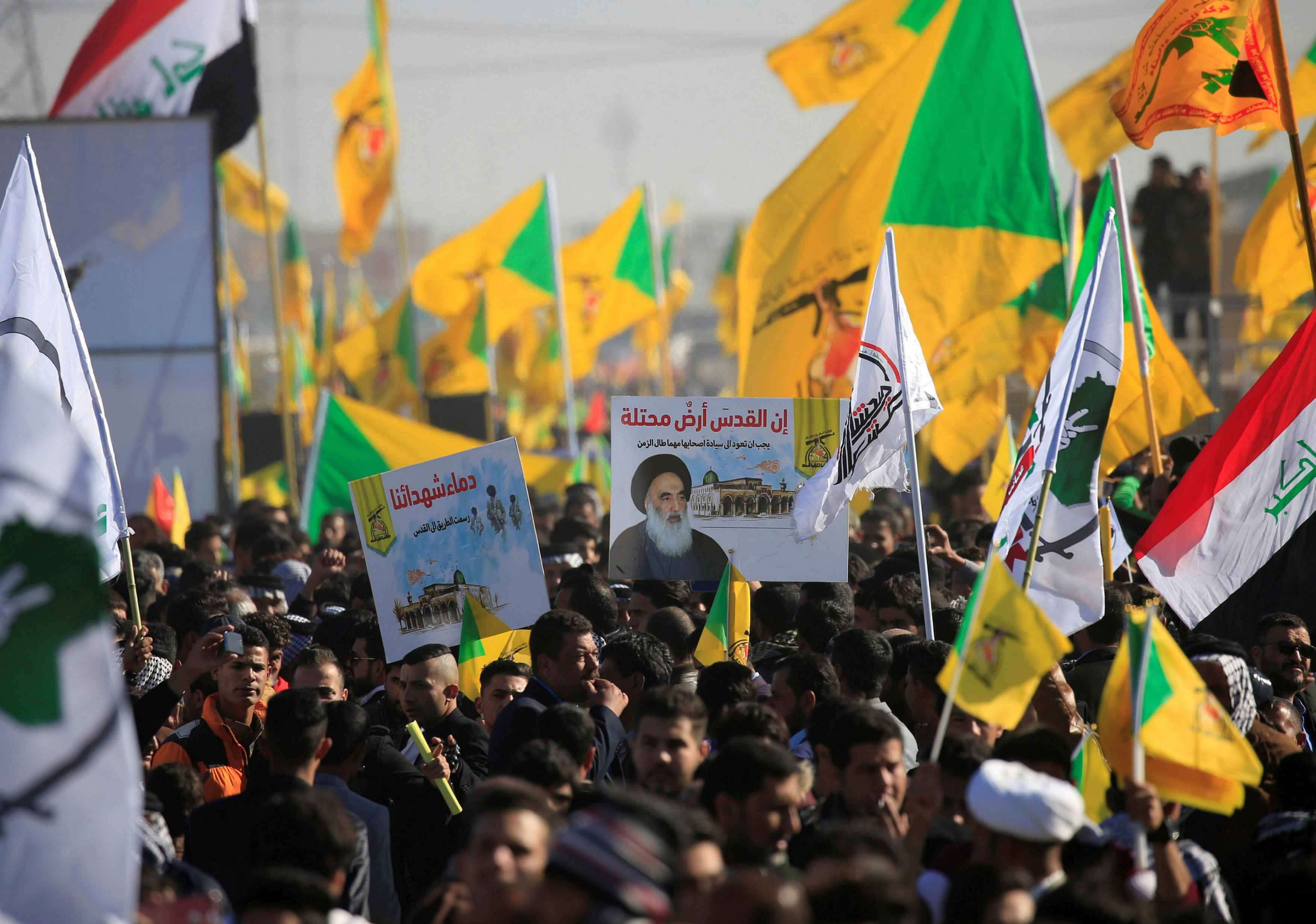 Supporters of the Popular Mobilization Forces (PMF) gather during the celebration of the final victory over ISIL at the Wadi al-Salam cemetery, in Najaf, Iraq, December 10, 2017. /Reuters Photo‍

Supporters of the Popular Mobilization Forces (PMF) gather during the celebration of the final victory over ISIL at the Wadi al-Salam cemetery, in Najaf, Iraq, December 10, 2017. /Reuters Photo‍

5. Continued disturbances in Iran could also pose another risk to the region. Although economic grievances were the main cause for the start of the demonstrations, the slogans soon turned political. One of the policies targeted by the demonstrations has been the financial support of the Islamic Republic of Iran to other countries and regimes, such as those ruling Syria, Gaza and Hezbollah in Lebanon. Such slogans could end up motivating Iran’s supreme leader, Ayatollah Khamenei, to increase support for such outside groups and regimes as a means of sending a message to his opponents that he won’t be cowed by them. This in turn could embolden Syrian President Bashar al-Assad not to make any compromises at the negotiation table. It could also embolden Hezbollah, Hamas and the Palestinian Islamic Jihad to become more aggressive towards Israel.
4. An Iranian-Israeli confrontation in Syria: an Israeli attack against pro-Iran militia, Iranian forces, Hezbollah and Assad forces in Syria in order to push pro-Iran forces as far away as possible from Israel’s borders with Syria. Such a scenario also carries the risk of such a war expanding into Lebanon with Hezbollah and its approximately 120,000 missiles being fired at Israel. Although this sub-scenario is less likely, its mere existence is likely to put many observers and citizens in both countries on edge. 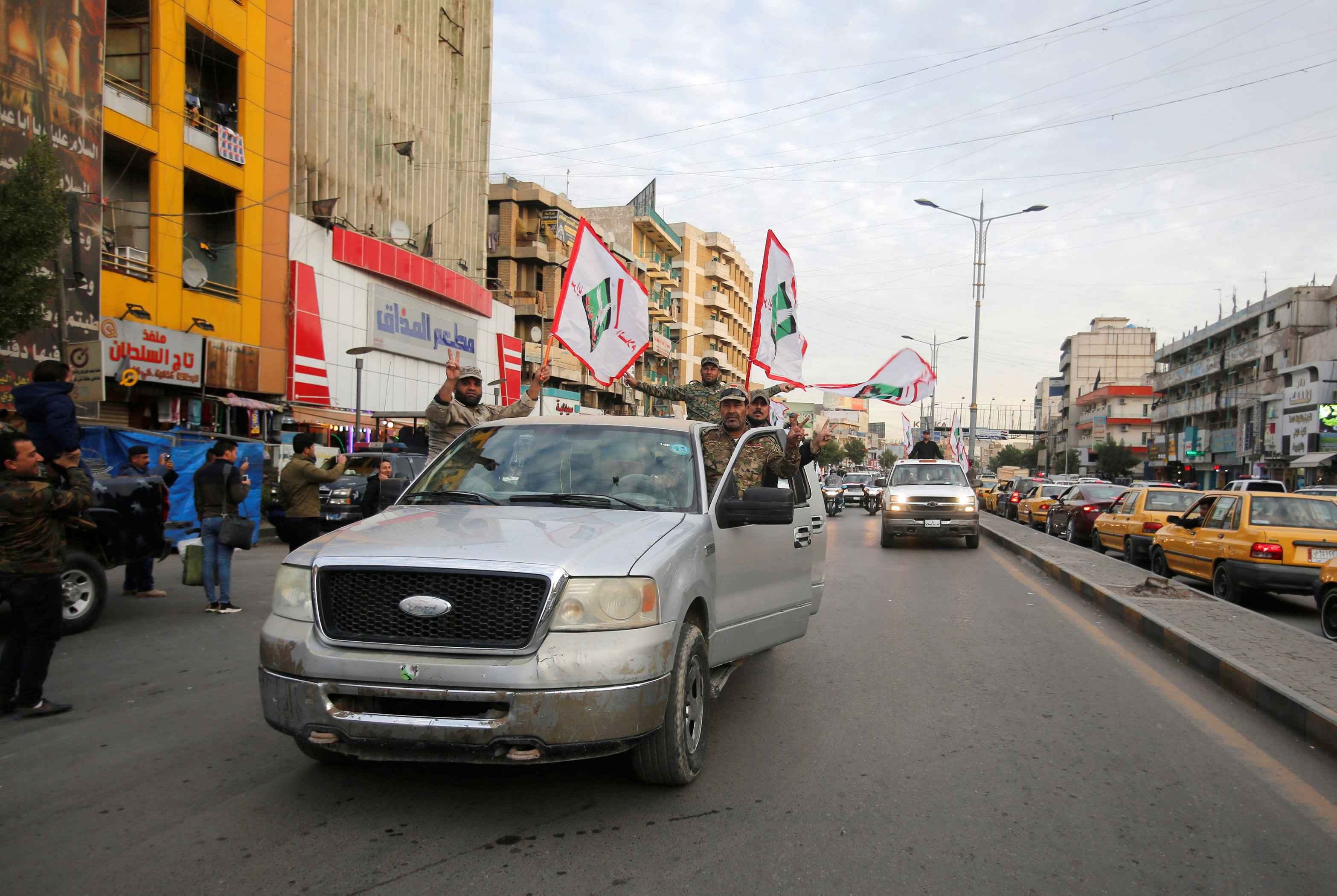 Members from Saraya al-Salam, who are loyal to radical cleric Muqtada al-Sadr, ride in a vehicle as they celebrate the final victory over ISIL at Tahrir Square in Baghdad, Iraq, December 10, 2017. /Reuters Photo

Members from Saraya al-Salam, who are loyal to radical cleric Muqtada al-Sadr, ride in a vehicle as they celebrate the final victory over ISIL at Tahrir Square in Baghdad, Iraq, December 10, 2017. /Reuters Photo

3. No solution found regarding the fate of Assad: This will be one of the key areas to resolve if a solution is to be found for the future of Syria. So far Assad, with the help of the Islamic Republic of Iran, is refusing to contemplate his removal from power in any of the peace negotiations sponsored by the UN and Russia. Should this continue, the Syrian war will continue this year, with no end in sight.
2. The Saudi-Houthi war in Yemen heats up, with more missiles raining down on Saudi Arabia from the Houthi rebels. This is likely to make an already militant Saudi Defense Minister and Crown Prince Mohammed bin Salman more aggressive in his fight against the Houthis and against Iran’s allies in the region, thus prolonging and widening the war in Yemen. Let's not forget that the day the Lebanese Prime Minister Saad Hariri was forced to resign by the Saudis was the day the Houthis fired a ballistic missile at Riyadh.[1]
1. Trump canceling the Iran nuclear deal is the biggest risk that could destabilize the Middle East as it could increase the chances of an Israeli and/or US military strike against Iran’s nuclear installations. Such a move could also embolden Iran to challenge US interests in the region and the Persian Gulf, thus increasing the risk of a military confrontation. And he could end the deal this year as the US Congress did not “amend” the deal as he requested after decertifying it in October 2017. In mid-January 2018, Trump faces a deadline to slap new sanctions on Iran, and he may take it. This would end the nuclear deal. We also have to remember that while campaigning he repeatedly attacked the deal. Trump also has midterm elections coming up in November this year, and such a move would boost his credential among his supporters.
(The author is a Middle East analyst. He teaches at the Interdisciplinary Center (IDC) in Herzliya, Israel and is a research fellow at the Meir Ezri Center for Persian Gulf studies at Haifa University in Israel. The article reflects the author’s opinion, and not necessarily the views of CGTN.)
[1] It was a surreal counterpoint to a series of events unfolding that day and into the night that set the entire Middle East on edge: a missile fired at Riyadh, the hundreds of Saudi princes and businessmen arrested, and Lebanon left stunned and confused. See https://www.nytimes.com/2017/12/24/world/middleeast/saudi-arabia-saad-hariri-mohammed-bin-salman-lebanon.html