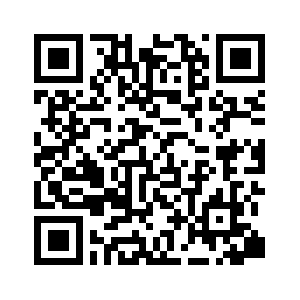 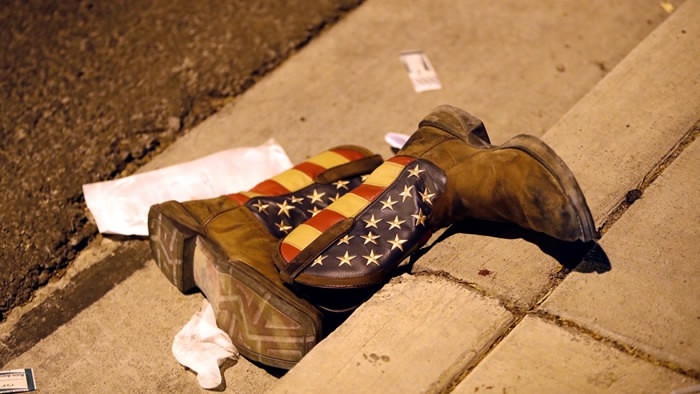 At least 50 people were killed and more than 400 injured when a gunman opened fire on a country music festival in Las Vegas on Sunday, raining down bullets from the 32nd floor of a hotel for several minutes before killing himself, according to police.
The death toll, which police emphasized was preliminary, would make the attack the deadliest mass shooting in US history, eclipsing last year's massacre of 49 people at an Orlando night club.
Some 22,000 people were in the crowd when the man opened fire, sending panicked people fleeing the scene, in some cases trampling one another. Shocked concertgoers, some with blood on their clothes, wandered the streets after the attack. 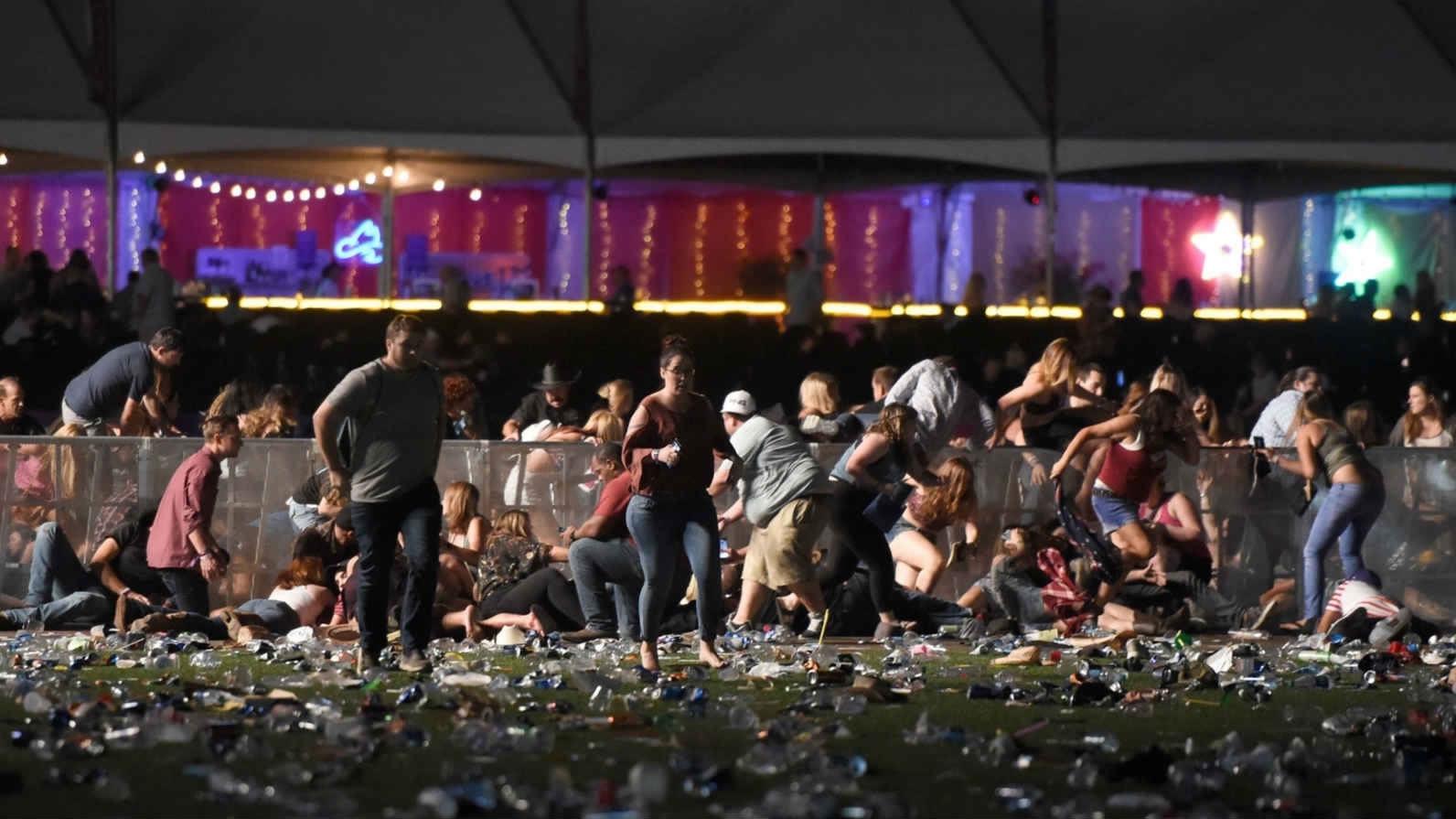 At least 406 people were taken to area hospitals with injuries, the Las Vegas Metropolitan Police said.
Police identified the gunman as area resident Stephen Paddock, 64, and said they had no information yet about his motive. Paddock shot himself before police entered the hotel room he was firing from, Clark County Sheriff Joseph Lombardo told reporters.
"We believe the individual killed himself prior to our entry," Lombardo said, adding that officers found "in excess of 10 rifles" in Paddock's room.
The gunman was not believed to be connected to any militant group, according to Lombardo. "We have no idea what his belief system was," he said.
However, ISIL claimed responsibility for the attack later on Monday and said the shooter converted to Islam months ago, according to the group's Amaq news agency. 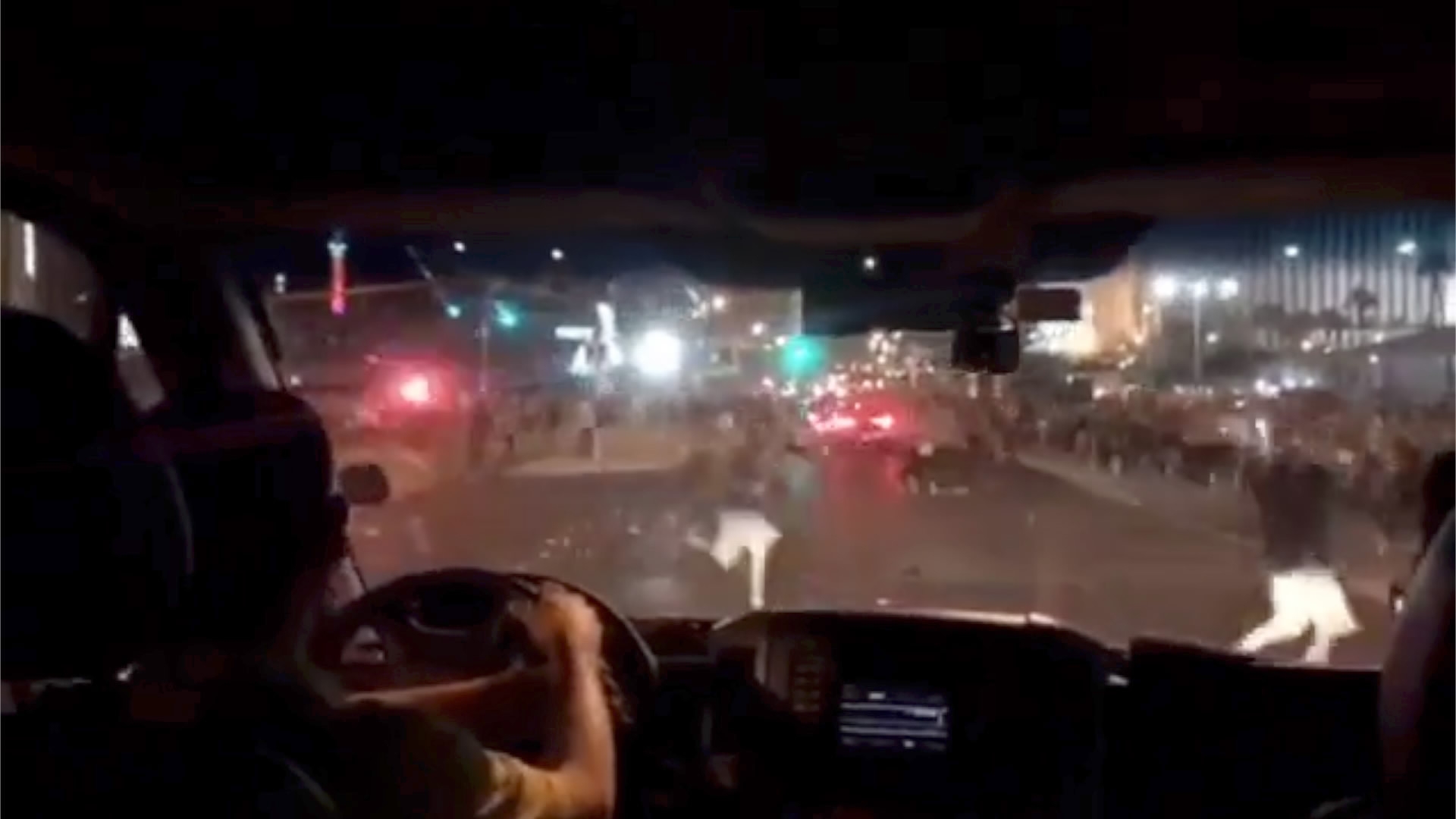 Authorities had earlier regarded Paddock's roommate Marilou Danley as a person of interest, but later on Monday said they no longer regarded her as related to the case, CNN and Fox News reported, citing police sources.
The dead included one off-duty police officer, Lombardo said. Two on-duty officers were injured, including one who was in stable condition after surgery and one who sustained minor injuries, Lombardo said. Police warned the death toll may rise.
Police are still finding people who had taken cover during the attack, Lombardo said.
"It's going to take time for us to get through the evacuation phase," he added. 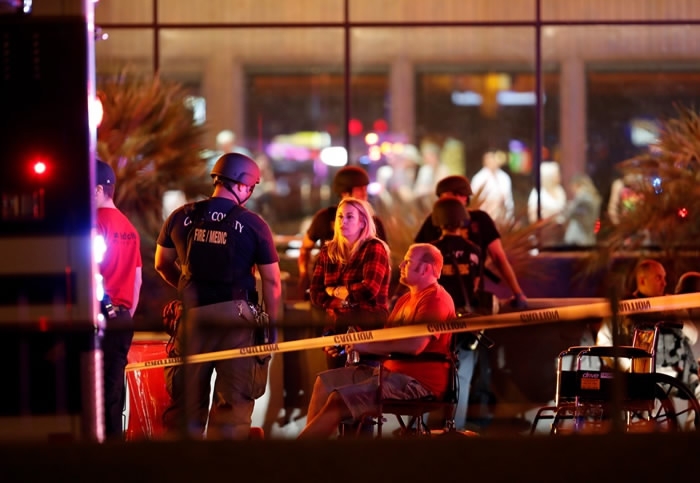 People wait in a medical staging area on October 2, 2017, after a mass shooting during a music festival in Las Vegas, Nevada, US. /Reuters Photo

People wait in a medical staging area on October 2, 2017, after a mass shooting during a music festival in Las Vegas, Nevada, US. /Reuters Photo

Las Vegas's casinos, nightclubs and shopping draw some 3.5 million visitors from around the world each year and the area was packed with visitors when the shooting broke out shortly after 10 p.m. local time (0400 GMT).
The rampage was reminiscent of a mass shooting at a Paris rock concert in November 2015 that killed 89 people, part of a coordinated attack by Islamist militants that left 130 dead.

Who is the gunman?

Best-selling country singer Jason Aldean was on stage at the time of the shooting which came towards the end of the concert. Revelers screamed and fled in panic as a steady stream of automatic gunfire rang out at the venue.
The gunman, Paddock, was believed to be a "lone-wolf" attacker. "Right now, we believe it's a sole actor, a lone-wolf-type actor," Lombardo said, adding that that police and FBI were still looking into Paddock's background. 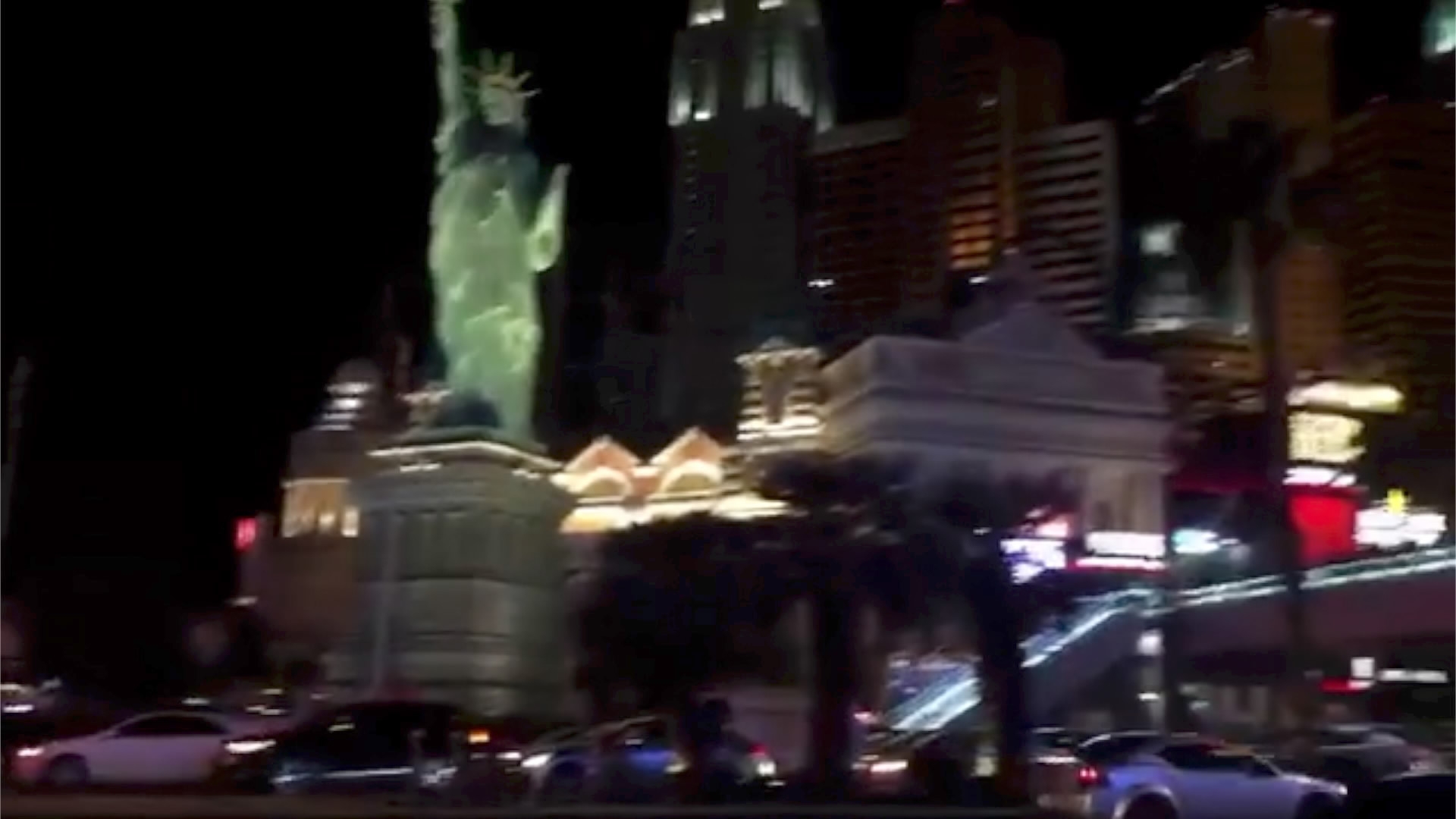 Paddock is reported to have lived in a retirement village in Mesquite, Nevada since June 2016. Mesquite Police told CBS News he was a white male not known to them and that he had no known connection to terrorism.
When asked by a reporter if it was an act of terrorism, Lombardo responded: "No, not at this point."
Terrorism expert Chris Sampson also told CGTN that it was too early to tell whether it was a terrorist attack. "Terrorism requires at least one component that may still be missing. We don't know the political (motive) or the reason why he's done this."
Sampson added the attack was likely to be treated as a "mass shooting event" and called a "very well planned attack." Judging from the sound of the gun, he said Paddock was "firing an automatic weapon, probably an M16." 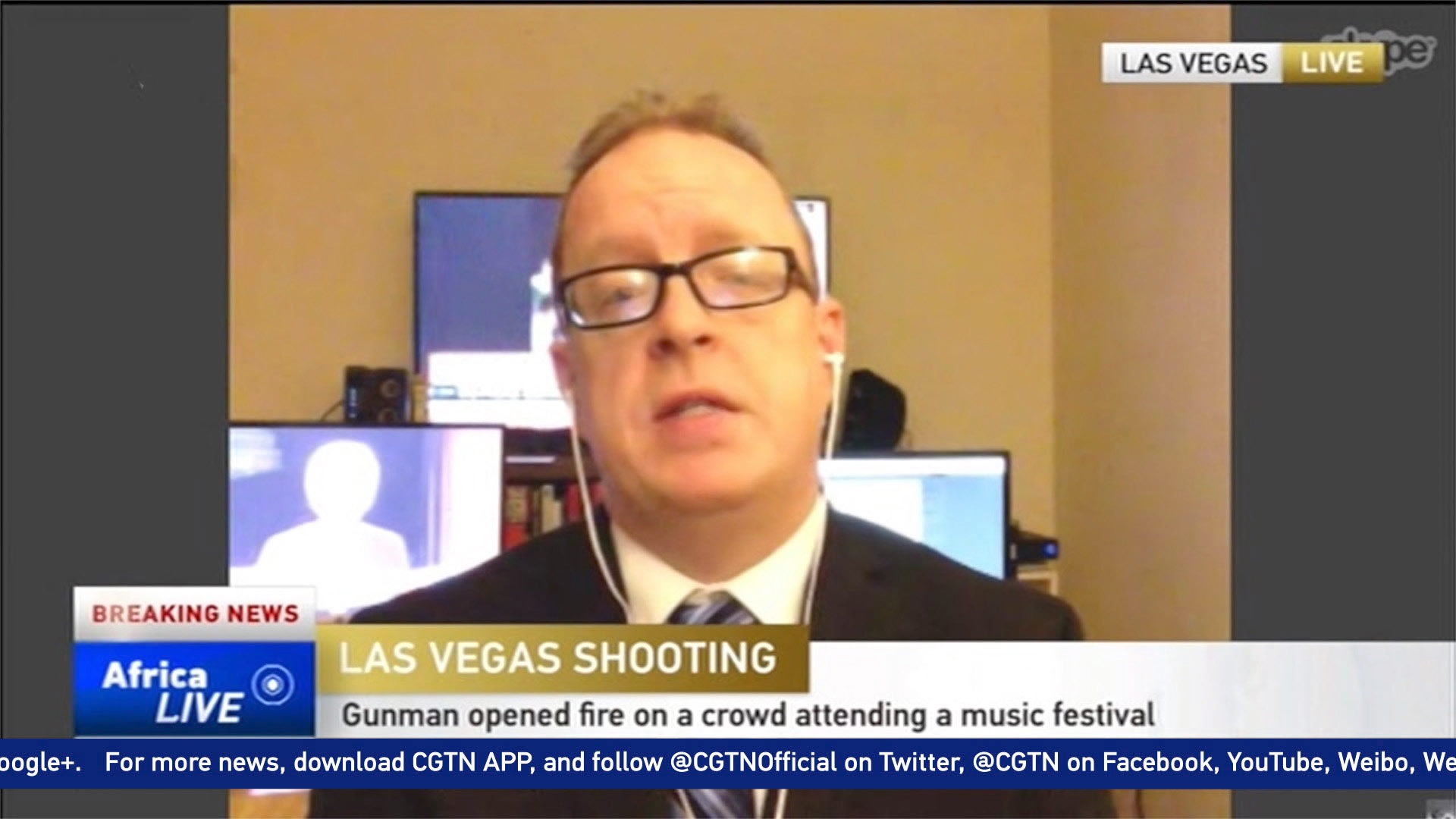 "We just left a fried chicken store near the MGM Grand Hotel and saw countless people who were alarmed running," Chen Kai, a Chinese witness told CGTN. "We hid in the casino of the MGM Grand Hotel, which was full of people who were crying, praying and shocked."
Yang Shu, a Chinese tourist who was near the shooting scene, told CGTN that she heard three gunshots when she "just finished watching a show on the Strip."
"Suddenly, there were a lot of people running towards me," she recalled. "I ran immediately. Police officer shouted at us and we ran to nearby hotels or stores to avoid bullets."
Other witnesses told how the gunman opened fire with an initial burst and then appeared to reload as he continued his spree. 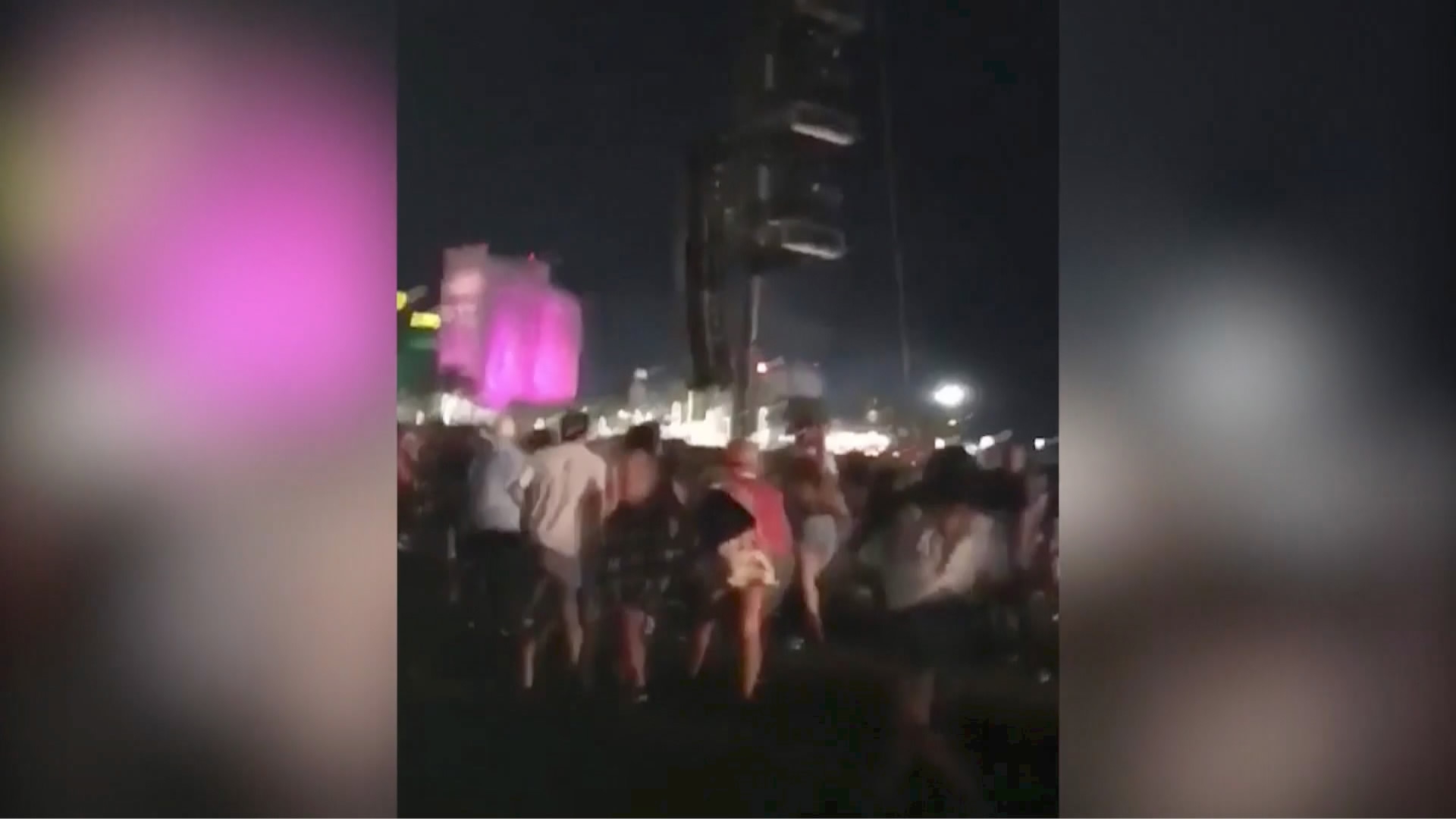 "We heard (what) sounded like a glass breaking, so you looked around to see what's going on and then heard a pop, pop, pop," Monique Dekerf told CNN. "You'd think for a moment okay we're fine, there's no more gunfire, then it starts again."
"We were watching the concert having a great time, then we heard what sounded like firecrackers," witness Joe Pitz told the local Las Vegas Sun news outlet. "I guess it was an automatic weapon going off but it literally sounded like firecrackers."

US President Donald Trump sent his "warmest condolences" Monday to the victims and families of the shooting in Las Vegas.
"My warmest condolences and sympathies to the victims and families of the terrible Las Vegas shooting. God bless you!" Trump wrote on Twitter.
White House spokesman Sarah Sanders said separately that the president had been briefed on "the horrific tragedy in Las Vegas" on Sunday night. "We are monitoring the situation closely and offer our full support to state and local officials," she said. "All of those affected are in our thoughts and prayers." 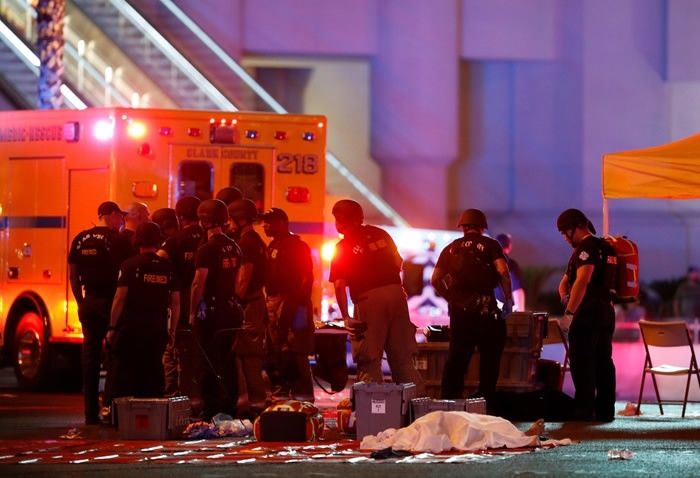 A body is covered with a sheet in the intersection of Tropicana Avenue and Las Vegas Boulevard South after a mass shooting at a music festival on the Las Vegas Strip in Las Vegas, Nevada, October 1, 2017. /Reuters Photo

A body is covered with a sheet in the intersection of Tropicana Avenue and Las Vegas Boulevard South after a mass shooting at a music festival on the Las Vegas Strip in Las Vegas, Nevada, October 1, 2017. /Reuters Photo

Though the shooting will probably "fuel a new round of gun control discussions" across the United States, Trump, a champion of gun rights, is likely to stick with "staunch defenders of Americans’ rights to carry firearms," according to Newsweek reporter Greg Price.
"You have a true friend and champion in the White House," Trump said in a speech to the National Rifle Association in Atlanta in April. He has rolled back an Obama administration gun regulation that prevented certain individuals with mental health conditions from buying firearms.
10063km
Source(s): AFP ,Reuters