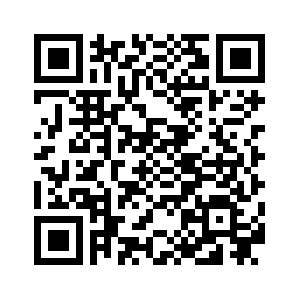 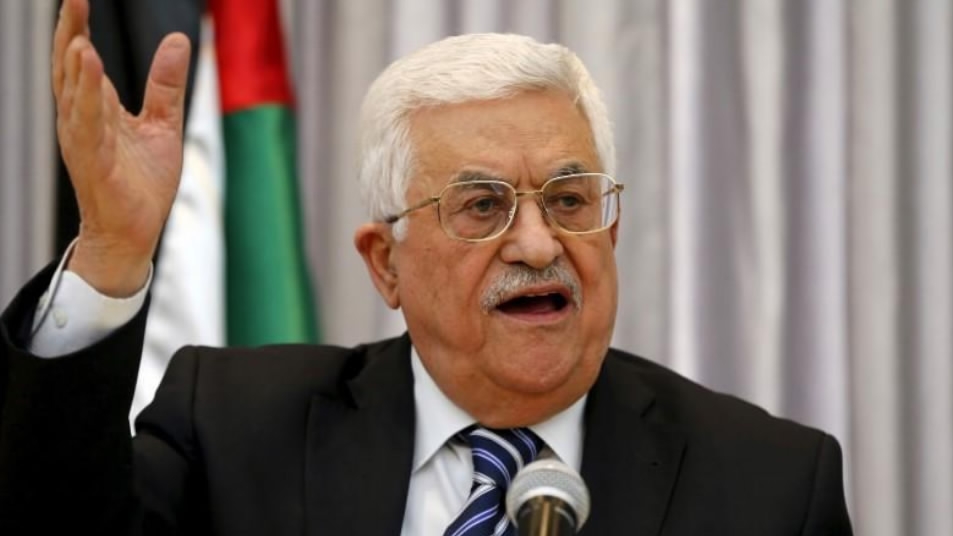 Palestinian President Mahmoud Abbas said on Wednesday that Jerusalem was the “eternal capital of the State of Palestine,” in response to the US announcement to recognize the city as Israel’s capital and move its embassy there, which pushed the "Palestinian issue into a critical stage."
"Our national Palestinian cause is at a crossroads after the US decision on Jerusalem," Abbas said in a televised address, adding "Jerusalem is the Palestinian capital. Its history and size dictate that its identity will not change by a US decision.”
"The Palestinians will remain a united front defending Jerusalem and peace and freedom and winning the rights of our people to end the occupation and achieve its national independence," he stressed.
Accusing the US's decision ignored and contradicted "the international consensus expressed by the positions of various countries of the world," Abbas said it also represented a withdrawal of US role as key sponsor for Israel-Palestinian peace talks.
Palestinians embark on 'days of rage' 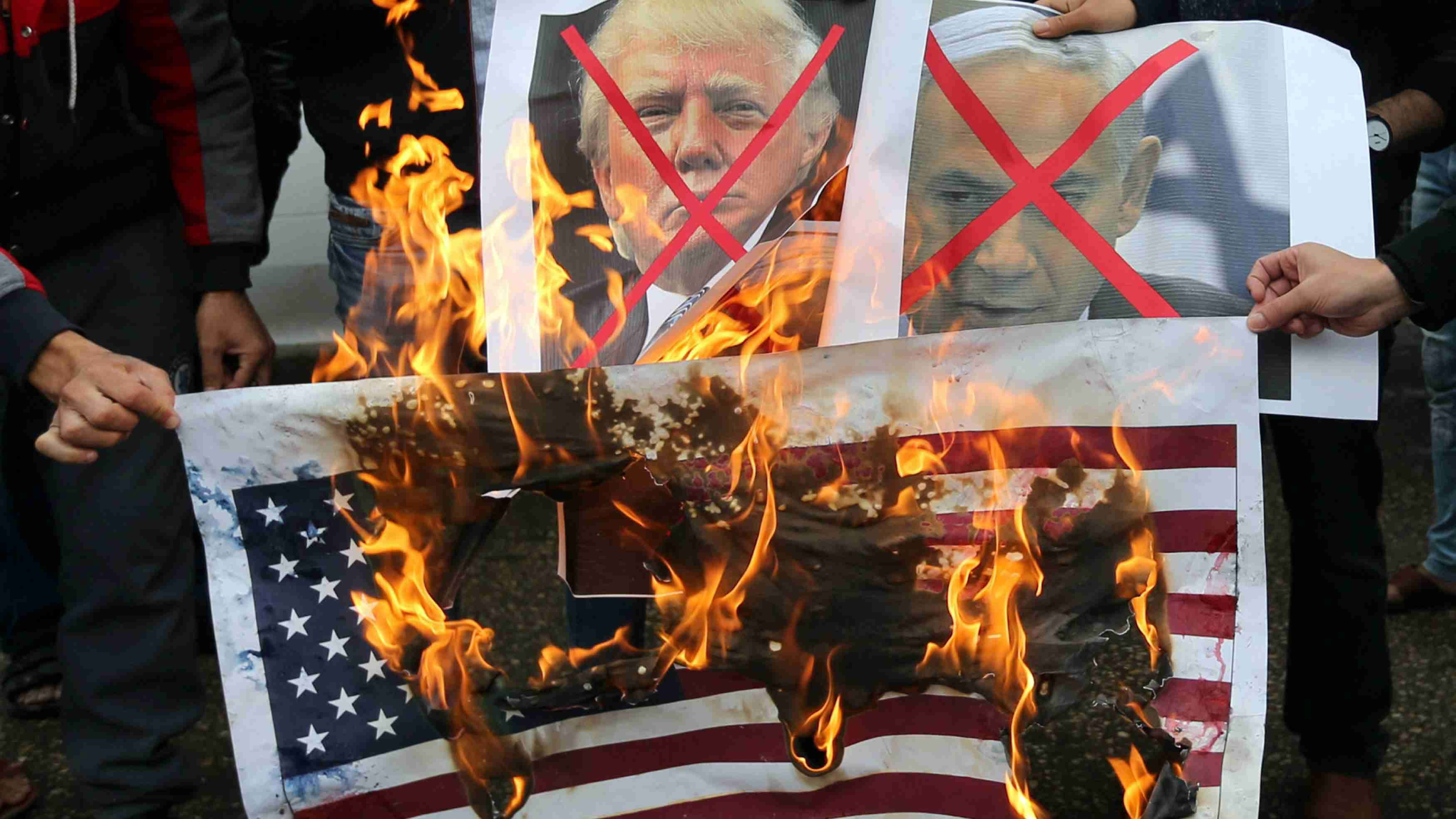 Trump's decisions have sparked outrage throughout the country. Hundreds of Palestinians in the Gaza Strip participated Wednesday in a mass rally organized by Islamic Palestinian factions, as Palestinian leaders called for three days of rage against the US decision on Jerusalem.
Gazan protesters burned pictures of US President Donald Trump and US flags, carrying banners denouncing Trump.
During the rally, Palestinian officials made it clear that the recognition and the embassy move would inflame tensions far and wide.
"Palestinian people and Palestinian political and national movements are protesting against the Trump's potential decision on Jerusalem. We say this decision is an aggression against our people, our nation, our holy places and our values. This is a serious challenge. We warn the US administration against making this decision," said Hamas leaders Ismael Radwan.
Palestinians also switched off Christmas lights at the birthplace of Jesus Christ in Bethlehem. 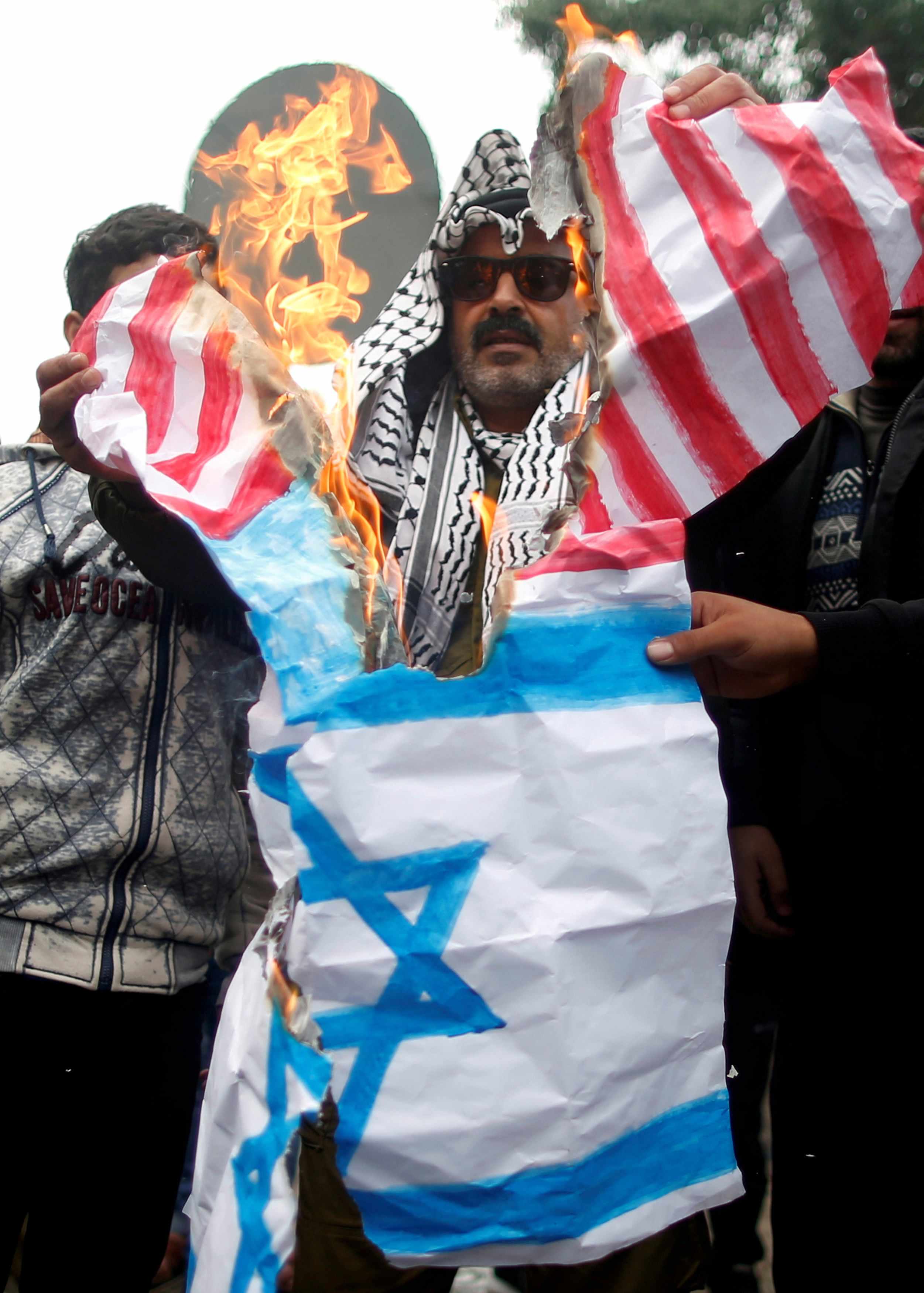 A Palestinians man burns representations of an Israeli flag and a US flag during a protest against the US intention to move its embassy to Jerusalem and to recognize the city of Jerusalem as the capital of Israel, in Gaza City December 6, 2017. /Reuters Photo

A Palestinians man burns representations of an Israeli flag and a US flag during a protest against the US intention to move its embassy to Jerusalem and to recognize the city of Jerusalem as the capital of Israel, in Gaza City December 6, 2017. /Reuters Photo

Similar scenes can also be seen in parts of Jordan's capital Amman inhabited by Palestinian refugees. In the Baqaa refugee camp on Amman's outskirts, hundreds roamed the streets denouncing Trump and urging Jordan to scrap its 1994 peace treaty with Israel.
"Down with America...America is the mother of terror," they chanted.
Israel hails Trump's announcement 'historic landmark'
Reactions from Israel were immediate. Prime Minister Benjamin Netanyahu hailed Trump's decision in a video message released right after Trump's speech.
"This decision reflects the President's commitment to an ancient but enduring truth, to fulfilling his promises and to advancing peace. The president's decision is an important step toward peace, for the reasonable peace that doesn't include Jerusalem as the capital of the state Israel," said Netanyahu. 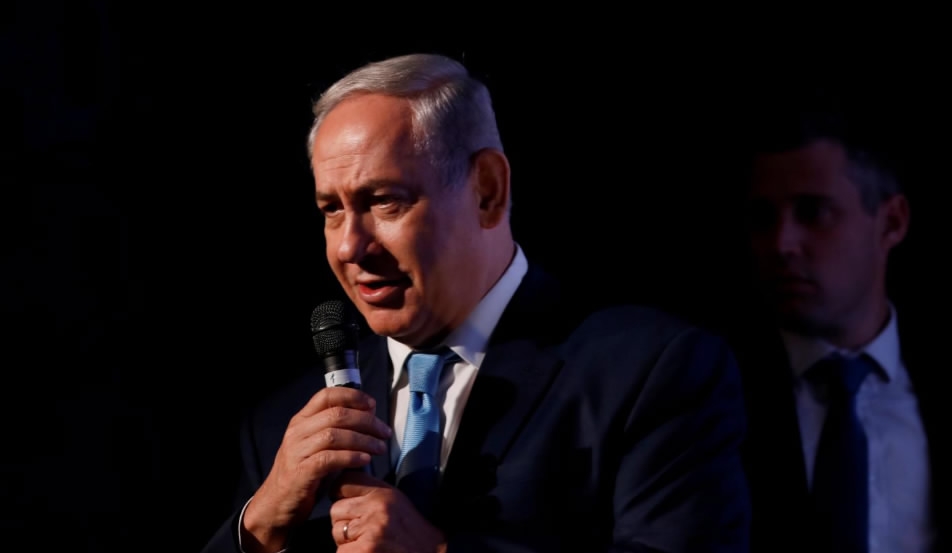 He noted any peace deal with Palestinians must include Jerusalem as Israel’s capital. That would be a non-starter for Palestinians in any negotiations if it meant the entire city would be under Israeli control.
Meanwhile, the US is asking Israel to temper its response to Trump's decisions, as Washington expects a backlash and is weighing the potential threat to US facilities and people, according to a State Department document seen by Reuters.
Condemnation from Europe
In Europe, UK Prime Minister Theresa May said her government disagreed with Trump’s acknowledgement which is “unhelpful” for peace in the region. French President Emmanuel Macron said the US made "a regrettable decision that France does not condone." German Chancellor Angela Merkel "does not support" the decision either, with its foreign minister Sigmar Gabriel telling public broadcaster ARD that the US decision will likely throw "fuel on the fire."
Saudis slam Trump's 'irresponsible' Jerusalem move
Saudi Arabia has also voiced anger with Trump's policy change, calling the move "unjustified and irresponsible."
"The kingdom expresses great regret over the US president's decision to recognize Jerusalem as the capital of Israel," said a Saudi royal court statement carried by the official Saudi Press Agency.
The decision goes against the "historical and permanent rights of the Palestinian people," the royal court said, calling on Trump to reconsider his decision. "The kingdom has already warned of the serious consequences of such an unjustified and irresponsible move," the statement said.
Iran: Serious repercussions await US and Israel 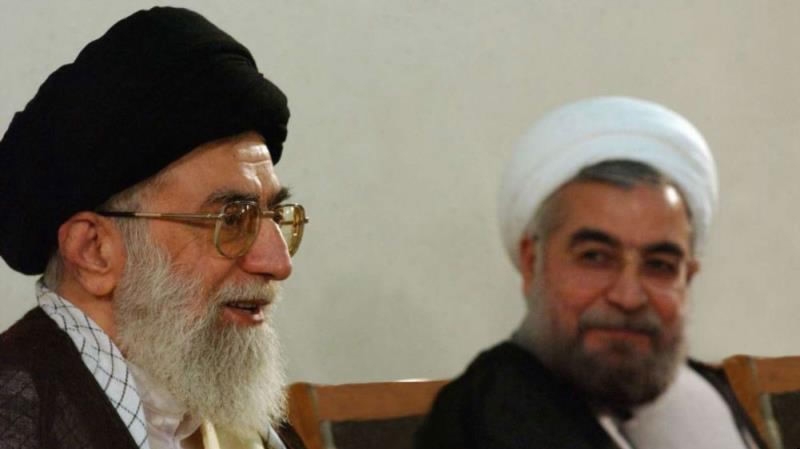 Top Iranian leaders have also condemned Trump's decision during a speech at an event marking the birth anniversary of Islam's prophet. Speaking in Tehran, they said that serious repercussions await the US and Israel, and that the Muslim world will not remain silent.
"By doing this they will be hit harder than before. The Islamic world will undoubtedly stand up to them. The enemy will absolutely be unable to achieve its desired goals on the issue of Palestine. Palestine will be liberated," said Ayatollah Ali Khamenei, supreme leader of Iran.
"Jerusalem belongs to Islam, Muslims and Palestinians. Such a move is an arrogant action by an out of region country," noted Iranian President Hassan Rouhani.
Canada not to move embassy to Jerusalem
The Canadian Foreign Minister on Wednesday said that the Canadian embassy will remain in Tel Aviv and its policy on Jerusalem won't change.
Chrystia Freeland said Canada's long-standing position is that the status of Jerusalem can be resolved only as part of a general settlement of the Palestinian-Israeli dispute.
Turkey and Jordan: Trump's move will lead to 'public unrest' in Islamic world
Meanwhile, Turkish President Recep Tayyip Erdogan and visiting King Abdullah II of Jordan, held a joint news conference in Ankara earlier. The two leaders said that President Trump's recognition of Jerusalem as Israel's capital, will lead to "public unrest" throughout the Islamic world. 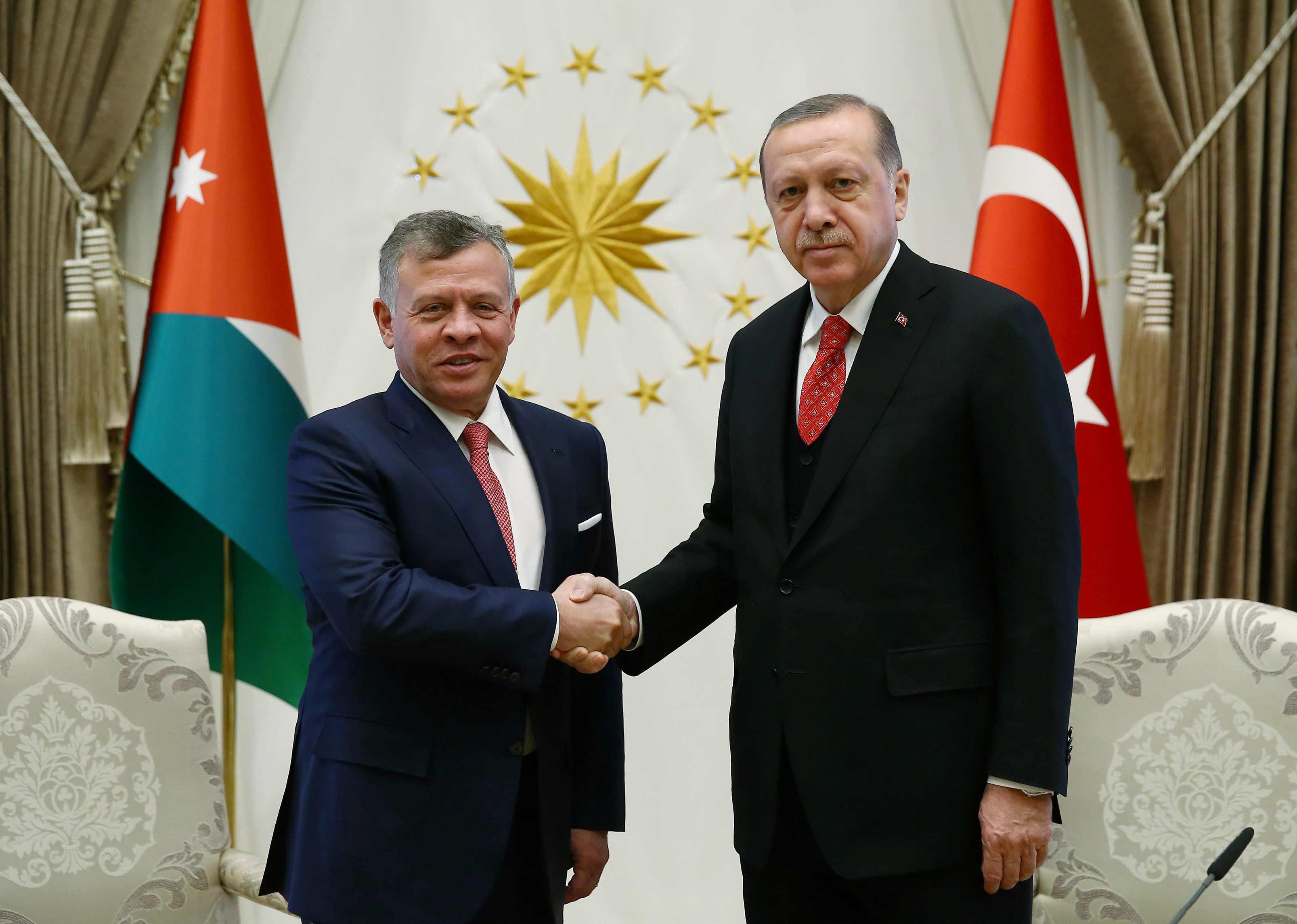 "One must stay away from taking any steps to change Jerusalem's legal status, which has been repeatedly confirmed by the United Nations. No one has the right to play with the fate of billions of people for the sake of one's personal ambitions. This kind of step would only play into the hands of terrorist organizations," noted Erdogan.
"It is imperative now to work fast to reach a final status solution and a peace agreement between Palestinians and Israelis, and this must allow the Palestinians to establish their independent state side-by-side with Israel and its capital in East Jerusalem," Abdullah said. "Ignoring the Palestinians and Christian rights in Jerusalem will only fuel further extremism."
China always supports Middle East peace process
Ahead of Trump's announcement, Chinese Foreign Ministry said China is paying close attention to the Jerusalem issue and firmly supports the Middle East peace process.
"The status of Jerusalem is complex and sensitive. All parties should focus on regional peace and stability, act cautiously, and avoid creating long-term obstacles to resolving the Palestine issue and triggering new confrontations," said spokesperson for the ministry Geng Shuang at a regular briefing on Wednesday.
"China has always firmly supported the Middle East peace process, and supports the Palestinian people in restoring their national rights and interests. China supports an independent and sovereign Palestine based on the 1967 borders and with East Jerusalem as its capital. We call on all parties to resolve differences through negotiations in accordance with the relevant United Nations resolutions," Geng noted.
(CGTN’s Zheng Quanbin and Feng Ran also contributed to this story.)