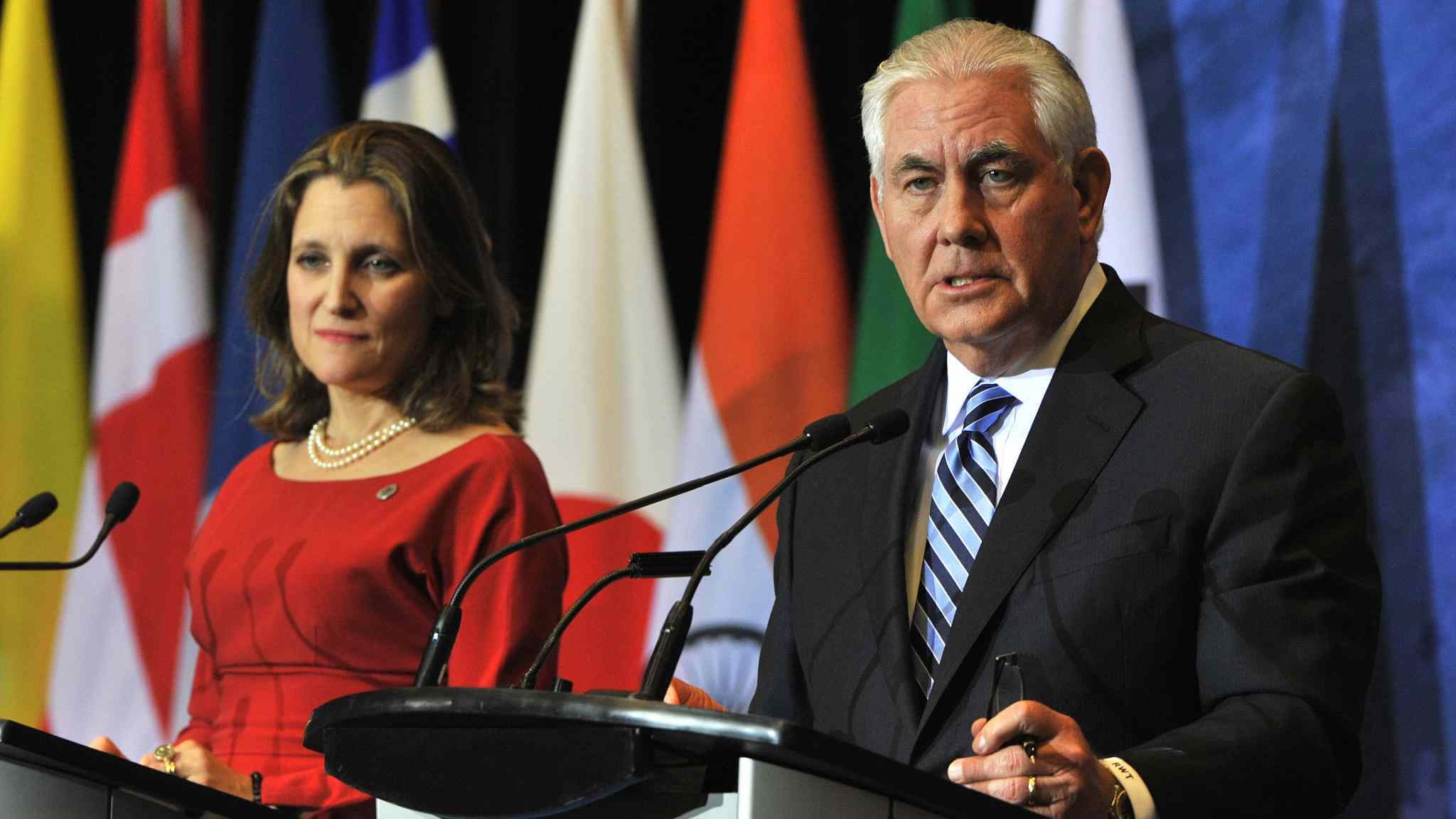 On January 16, Canada and the US co-hosted a foreign ministers' international meeting in Vancouver on security and the Democratic People's Republic of Korea (DPRK) crisis.
Harjit Sajjan, the Canadian National Defense Minister, and James Mattis, the US Secretary of Defense, attended this meeting along with foreign ministers from 20 countries; countries that were members of the UN coalition during the Korean War (1950-1953) while the key players, namely the DPRK, China, and Russia, were conspicuous by their absence.
Why are China, Russia and the DPRK ‘excluded’ from the Vancouver meeting?
"We’ve invited both of them [China and Russia] to the meeting, and if they chose at the last minute to come, we would be grateful to see them there," Canadian Foreign Affairs Minister Chrystia Freeland told CBC.
An invitation that was not a real one as clarified by Sergey Lavrov, the Russian Foreign Minister. Lavrov stated that the invitation was not for the meeting itself but for the post-meeting briefing once the main sessions were over to merely notify both China and Russia of the meeting’s agreements.
This ‘exclusion’ from the meeting may be explained through two lenses:
1) From the Canadian-American point of view, not inviting China and Russia means that the US and Canada want to shortcut them. It gives the impression that there is no trust and no cooperation on this issue. And not inviting the DPRK, the main party concerned, leaves the observer wondering about the motives of the meeting.
2) From the Chinese-Russian-DPRK perspectives, being invited to the post-meeting of an event in which they are the main protagonists, simply to present them with the fait accompli is a slap in the face; neglecting their importance in the global geopolitical chessboard is calling for more trouble than anything else as it calculated to only further alienate and infuriate both China and Russia. 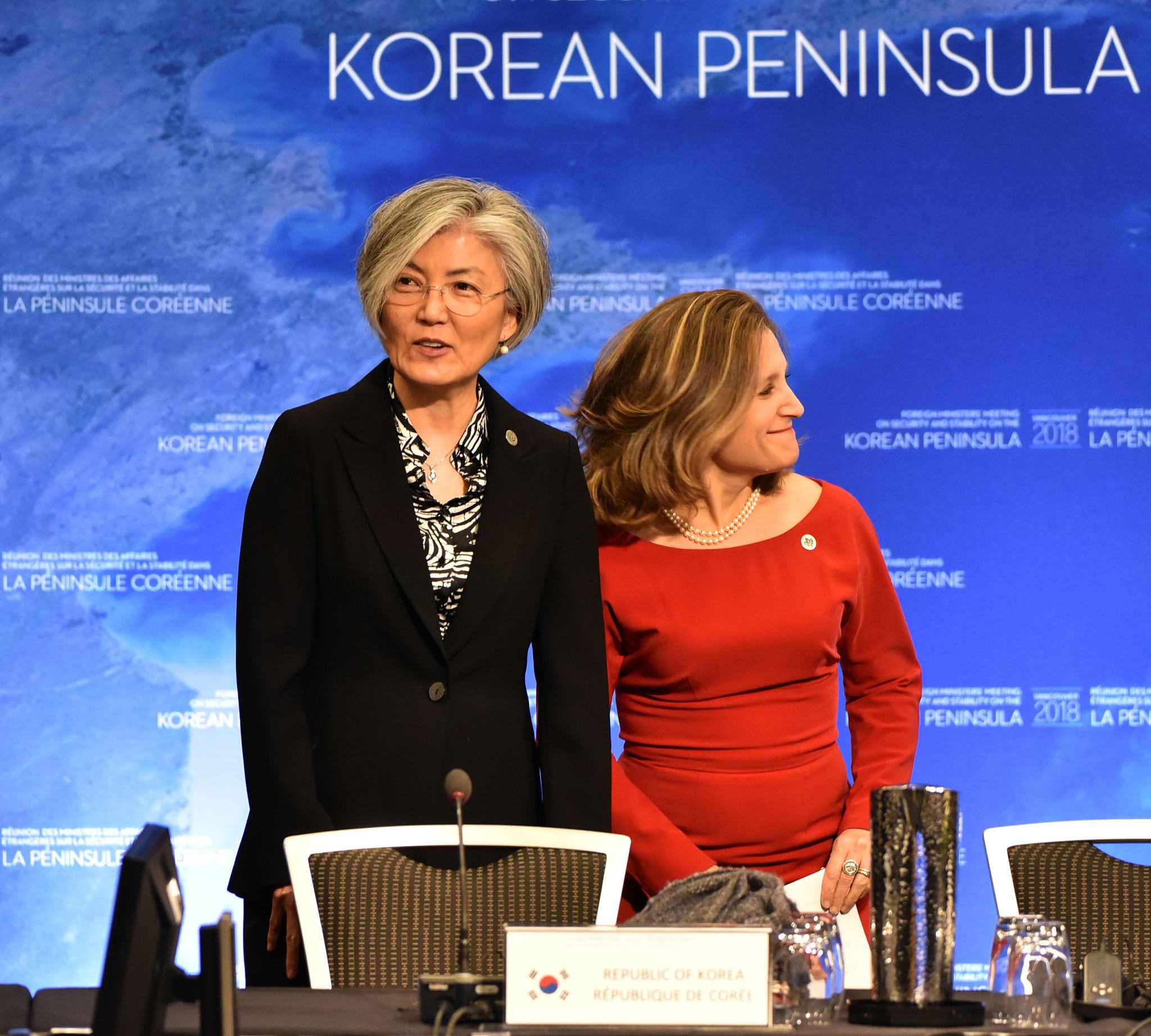 Furthermore, both China and Russia are opposed to this meeting. Indeed, on the one hand, Lavrov labelled it "destructive" since it brings back to the open the old wounds of the Korean War by involving countries such Colombia, Greece and Ethiopia; countries that are far away from the current crisis but that were part of the UN coalition during the Korean War.
Their participation in this meeting may irk China, which may retaliate in turn using its own tactics (i.e. reduced investments). On the other hand, China’s Foreign Ministry said that the meeting could ‘‘undermine the joint efforts that are being made to resolve properly the Korean Peninsula nuclear issue,’’ especially now that the DPRK and the ROK have resumed talks after more than two years.
Nearly 65 years of armistice are being ignored and it is as if a new chapter of the Korean War is taking place. Moreover, both China and Russia are warning against a return to "Cold War mentality," aka an escalation of Cold War 2.0, which brings us to the motives of this meeting.
What are the real motives behind the Vancouver meeting?
Officially, the aim of this meeting is to show international commitment to a diplomatic resolution of the DPRK conflict, especially after the latest escalation as described by Brian Hook, director of Policy Planning at the US State Department, to several media outlets: ‘‘The ministerial – the goal of the ministerial is to provide a practical mechanism – mechanisms to exert continued pressure on the Kim regime while demonstrating that diplomatic options remain open and viable.”
The Vancouver meeting may be considered as an exploratory meeting after the "failure" of other diplomatic channels and international sanctions. That is indeed a positive and optimistic way of perceiving this meeting.
There is a second way that is more realistic, which is that the meeting is a media show and a PR campaign conducted by the US with the help of Canada to create  media hype about the issue to tell the global public about their "commitment" to find a diplomatic "peaceful" solution to the crisis, especially after the escalation of Trump and Kim Jong Un’s tit-for-tat tweets and, above all, Hawaii’s highly suspicious  "accidental" missile alert that sent the world into a frenzy and that occurred conveniently just a couple of days before the meeting and the alert posted on January 16 on the website of the Japanese public television NHK about a DPRK attack that was removed 5 minutes later.
That said, with the presence of Mattis and Sajjan, the so-called diplomatic show may be considered a smoke screen for the ulterior motives where the military aspect is important… This may partly explain why China and Russia have been pushed aside!
Knowing that Trump is first and foremost a businessman, and that war is a lucrative business, as revealed by his arms sales to Japan during his Asian tour show, the business of war is an element that leaves the observer wondering about Trump’s real motives in terms of the resolution of this conflict. 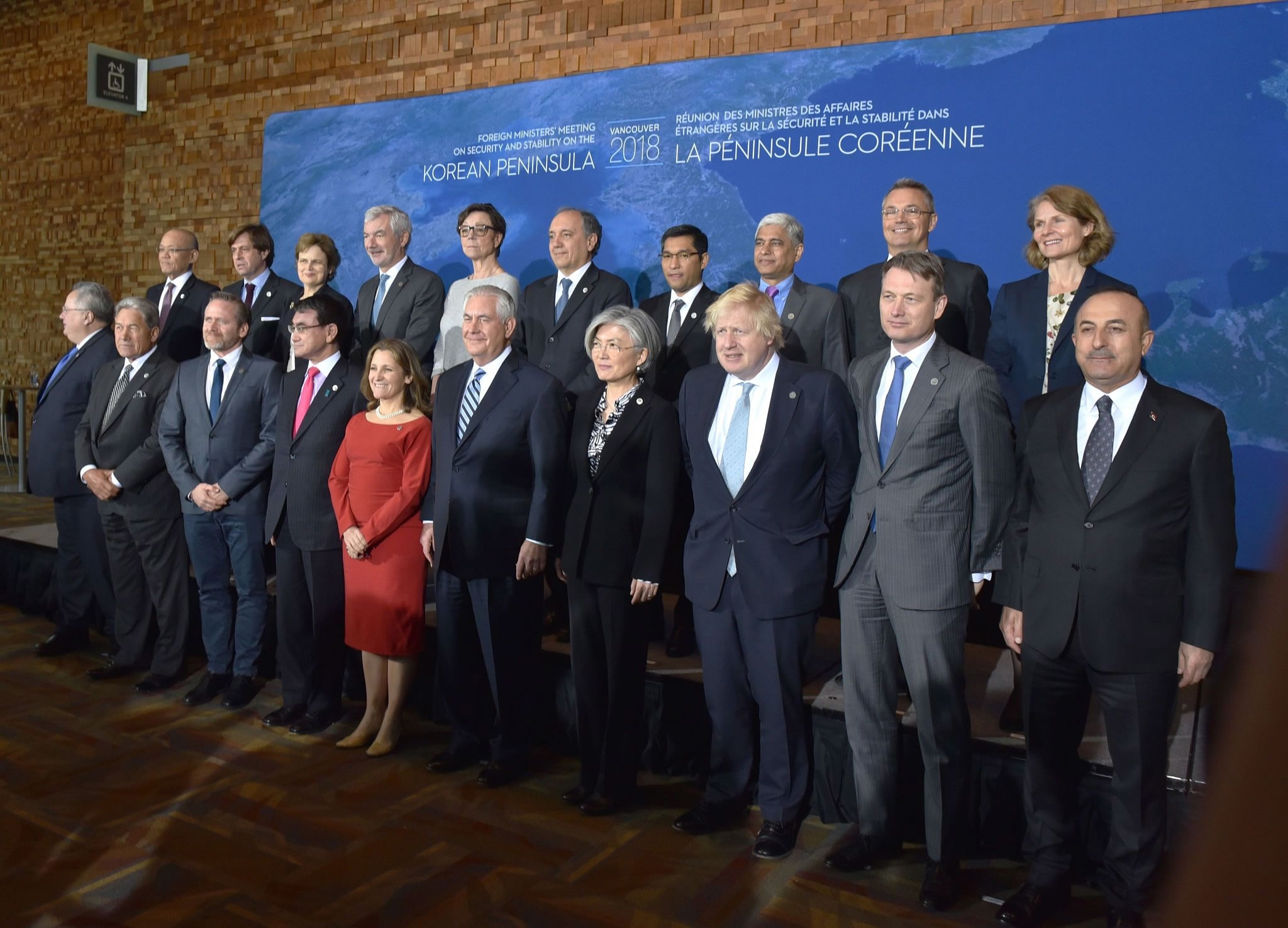 Foreign Ministers from 20 countries from North and South America, Asia, and Europe pose for a group photo at the Vancouver Foreign Ministers Meeting on Security and Stability on the Korean Peninsula, in Vancouver, Canada, January 16. /VCG Photo

Foreign Ministers from 20 countries from North and South America, Asia, and Europe pose for a group photo at the Vancouver Foreign Ministers Meeting on Security and Stability on the Korean Peninsula, in Vancouver, Canada, January 16. /VCG Photo

Then, what role can the Vancouver Group meeting play, given the fact that the Six-Party Talks have been stalled until today?
The meeting covered:
1) An updated review of the current DPRK issue to have the whole big picture before making decisions;
2) Sanctions (such as a strict naval blockade) that could be taken to "strangle" the DPRK and push it to stop its nuclear and ballistic missile programs;
3) New diplomatic actions to undertake with more players;
4) Further actions to take following the conclusions reached in this meeting.
This is an ambitious agenda, and moreover an ineffective one since the key players are absent. With the exclusion of China, Russia and the DPRK, the range of the possible agreements at the Vancouver meeting would be limited to wishful thinking at best, with the hope that the problem would fade over time.
As China and Russia have indicated, the Vancouver meeting is not the proper venue to resolve this lasting conflict. A UN institutional framework or a resumption of the Six-Party Talks is more conducive to coming up with a solution that will satisfy all parties, if only Trump and Kim Jong Un can stop their game that has real global consequences if pushed to the limit.
Moreover, more sanctions simply won’t bring about the expected result, which is to stop DPRK’s nuclear weapons development, since there is always a way to circumvent sanctions (i.e. Russia’s continuing trade with the DPRK and lately China’s tankers transferring oil at sea to DPRK ships), which brings us to what should be done to resolve this conflict.
‍How to solve DPRK issue once and for all?‍
To end the Korean War once and for all, a new armistice must be signed between the warring parties, namely the DPRK and the US.
To do so, an understanding of the logics at play is crucial.
On one side, there is the Western logic (the US) that needs a winner and a loser to stop a war. Yet, in this case, there is no winner and no loser. The war stopped in a draw, hence the ongoing crisis. This logic has shown its limits.
On the other side, there is the Eastern logic (the DPRK, the ROK, Japan) that abides by the Go Strategy. In other words, the adversary must be immobilized by restricting its options, surrounding him, and gaining more territory and influence to make it impossible for him to move until he accepts defeat. This logic is directly derived from Sun Tzu’s teachings: “The supreme art of war is to subdue the enemy without fighting.” This is what Japan and the ROK are trying to do, following as well Confucian logic by using a trial and error approach in their dealings with the DPRK which leads to small steps, which in turn leads to small victories until the goal is achieved in the long term. Japan and the ROK are working on demolishing the wall of the conflict one tile at a time.
Once these two clashing logics can be understood, it is clear that a sustainable and a peaceful resolution of the conflict must and will come from the Eastern logic. This is what China and even Russia are aiming for. A face-off will only lead to a regional conflict with a global impact that no one wants, neither the warring parties (with the exception of the US to a certain extent) nor the neighboring countries.
For the DPRK, a war will be a war led by sheer desperation, where its people have nothing to lose while, for Japan and the ROK, a war will break their hopes for peace and for reunification in the long run for the latter. And this is where China and Russia’s roles are key. They will halt Trump’s warlike behavior while trying to pacify the DPRK that uses its nuclear program as a war deterrent, which is what makes it powerful and has allowed it to avoid becoming a second Iraq.
That said, the Vancouver meeting will be just another international meeting that will very likely do more harm than good. To really resolve the issue, the mechanisms that already exist need to be used differently, this time to get different results than previous results.
Resorting to the UN Security Council and opening the diplomatic channels more broadly, with a better understanding of the logics at play while containing the flip-flopping Trump and avoiding confrontation will bring peace in the end. Resorting to more sanctions, attacks, and shows of force will only keep on adding salt to injury by rekindling old wounds and escalating the issue, reigniting an unwelcomed tension. Resolving the DPRK conflict through the UN will not be easy nor quick. It will be a very real test for an organization that is suffering an existential crisis. Succeeding in this will mean that there is a hope for the UN to overcome all the obstacles it is facing along with the changes that the world is going through. The roles of China and Russia remain capital.
In parallel, the Six-Party Talks may be a complementary framework to restore bilateral dialog between all the involved parties without the interference and the involvement of other countries (i.e., the ones participating in the Vancouver meeting). The good faith of all parties (especially of the US) is mandatory to kick-start another round of talks (using an open and positive mindset) that may lead to fruitful results.
(The author is a lecturer at HEC Montreal and Polytechnique Montréal, a consultant, and an independent researcher. The article reflects the author's opinion, and not necessarily the view of CGTN.)