Rock Collapse Tragedy: Survivor still bears a glimmer of hope for the missing 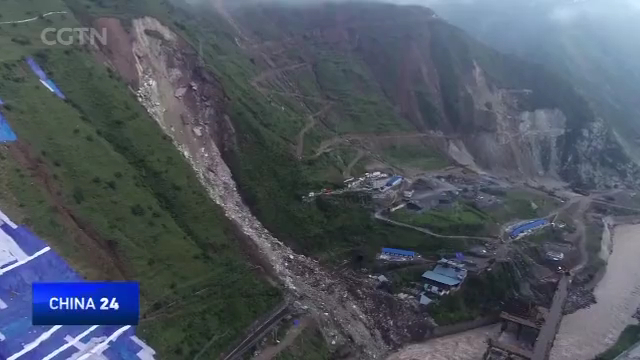 There has been no major developments regarding the search for the seventeen missing workers, three days after a massive rock collapsed in Ganluo County, in southwest China's Sichuan Province. As hopes dim, the memory of the tragedy remains clear for the survivors. Our reporter, Yang Jinghao, talks to one of them.
The seventy-two "golden hours" for rescue are now over following the deadly rock collapse, yet still no sign of life has been traced for the seventeen still missing. For the eleven who survived the disaster, the moment is still lingering in their mind.
CHEN KUN SURVIVOR "When I was running, it was like the rolling rocks were closely chasing after me, with some hitting me. When I looked back about 40 meters away, the whole section of the railroad had been buried."
46-year-old Chen Kun has worked on the railway linking Chengdu and Kunming, two major cities in southwest China, for twenty-nine years. His job is to maintain the bridges, tunnels and drainage equipment along the railroad. When nighttime fell, they were dredging a section, which was disrupted by rainstorm-triggered landslides. Today, he still cannot bear the thought of losing his co-workers, especially 28-year-old Yang Ming, someone he took as his apprentice.
CHEN KUN SURVIVOR "He was just seven or eight meters from me. He was able to escape, but he went back to inform others who were not aware of the collapse."
In Chen Kun's eyes, Yang is a hard-working, responsible and considerate young man, just like many other rail workers.
CHEN KUN SURVIVOR "The day before the tragedy, he sent me a message, saying 'Let me work your shift tomorrow. You come back for a break.' These were the last words he said to me by phone."
"Heartbroken" is the word he repeated most during our conversation.
CHEN KUN SURVIVOR "He is just several years older than my son. Sometimes, I treated him like my son. How can such a good young man leave us in an instant?"
Chen Kun went back to work the next day, monitoring for potential hazards as rescue operations proceeded. He still has a glimmer of hope in his heart.
CHEN KUN SURVIVOR "I'm thinking that even if they lost their lives, I still want to see their bodies and bid farewell to them. After all, we have been colleagues and friends for so many years."
Looking ahead, Chen Kun says his passion for his job won't be affected. Coincidentally, his name shares the same pronunciation with that of the railway. He says that guarding its safe operations is a lifetime responsibility. YJH, CGTN, Ganluo County, Sichuan Province.
SITEMAP
EXPLORE MORE
DOWNLOAD OUR APP