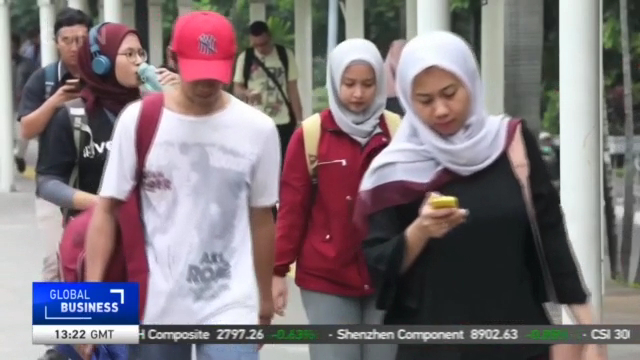 Indonesia's investment climate is improving. Research shows that foreign investment climbed to 8 billion US Dollars between April and June after a steep decline earlier this year. Political stability after the 2019 election is drawing more investors to pour their money into such sectors as transportation and digital economy. Silkina Ahluwalia reports.
Joko Widodo's re-election as Indonesia's president is looking positive for the country's investment climate. Indonesia is already seeing a surge of investments in various sectors. During Joko Widodo's campaign, he promised to strengthen Indonesia's economic growth and open up jobs for millions of people each year.
EKO LISTIYANTO, DEPUTY DIR. INDEF "Since April, Indonesia's investments have increased immensely which is what the country needs. However, we are seeing that the investments are mostly in the tertiary sectors which doesn't provide a lot of job opportunities but it does help to close the gap in the country's current account deficit and stabilise our currency."
For much of Joko Widodo's first term, he focused on making investments easy in Indonesia by introducing quick licensing approvals and reducing dwelling times in customs and ports. Singapore, Japan and China remain the biggest investors in Indonesia with investments ranging from transportation and infrastructure-related sectors to the digital economy.
JOSUA PARDEDE ECONOMIST "Indonesia, I think, is one of the most lucrative investment destinations in ASEAN because we are still one of the most stable emerging countries and we have huge domestic market. Can you imagine beyond 250 million people will be the market for any investors, so that's why investors still look at us as the biggest country in ASEAN."
Indonesia's ranking in the World Bank's Ease of Doing Business index has also drastically improved. Out of 180 countries, it jumped from 120 last year to 73 this year.
SILKINA AHLUWALIA JAKARTA, INDONESIA "Indonesia is now eyeing massive investments under The Belt and Road Initiative. Back in April, the government submitted several projects worth more than 90 billion US dollars. This opens up the country to new sets of opportunities that could help Indonesia reach its full potential and boost economic growth. Silkina Ahluwalia, CGTN, Jakarta."
SITEMAP
EXPLORE MORE
DOWNLOAD OUR APP