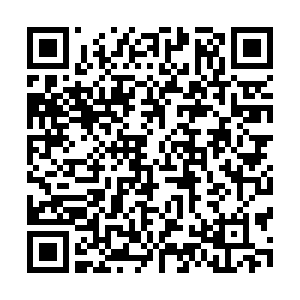 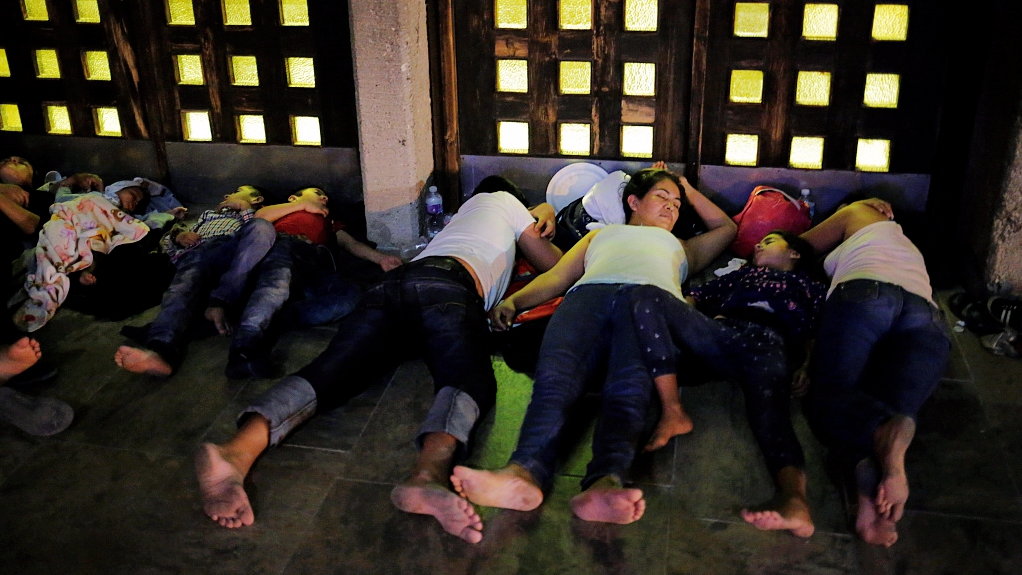 Central American migrants, who are returned to Mexico from the United States to await their court hearing for asylum seekers, as part of the legal proceedings under a new policy established by the U.S. government, sleep outside the Our Lady of Guadalupe Cathedral in Ciudad Juarez, Mexico, July 14, 2019. /VCG Photo

Central American migrants, who are returned to Mexico from the United States to await their court hearing for asylum seekers, as part of the legal proceedings under a new policy established by the U.S. government, sleep outside the Our Lady of Guadalupe Cathedral in Ciudad Juarez, Mexico, July 14, 2019. /VCG Photo

While officials dubbed it an "interim rule" until Congress approves stricter laws, the new measure faced widespread condemnation from legal experts and civil rights groups that called it a blatant violation of both U.S. and international asylum laws.

The Department of Homeland Security said in a joint statement with the Department of Justice the rule would set a "new bar" for immigrants "by placing further restrictions or limitations on eligibility for aliens who seek asylum in the United States."

"The United States is a generous country but is being completely overwhelmed by the burdens associated with apprehending and processing hundreds of thousands of aliens along the southern border," said U.S. Attorney General Bill Barr.

"This rule will decrease forum shopping by economic migrants and those who seek to exploit our asylum system to obtain entry to the United States," Barr added. 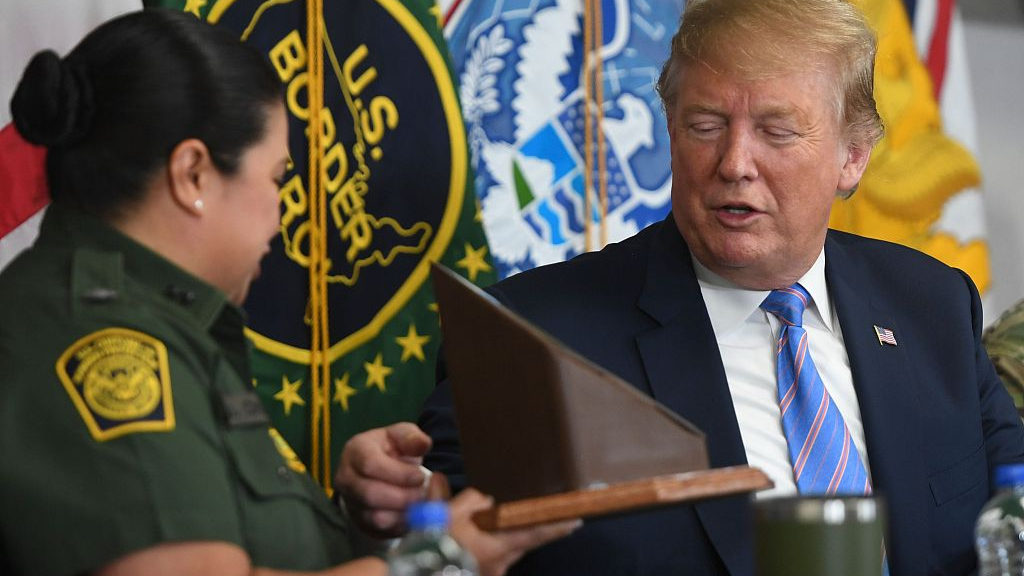 U.S. President Donald Trump is given a piece of the border wall from CBP Chief Patrol Agent Gloria Chavez during a roundtable on immigration and border security at the U.S. Border Patrol Calexico Station in Calexico, California, April 5, 2019. /VCG Photo

U.S. President Donald Trump is given a piece of the border wall from CBP Chief Patrol Agent Gloria Chavez during a roundtable on immigration and border security at the U.S. Border Patrol Calexico Station in Calexico, California, April 5, 2019. /VCG Photo

Immigration experts and migrant advocacy groups criticized the move, with the American Civil Liberties Union (ACLU) slamming the new rule as “patently unlawful” that violates both domestic and international laws. The ACLU also vowed to legally challenge the move through a lawsuit.

"The Trump administration is trying to unilaterally reverse our country's legal and moral commitment to protect those fleeing danger. This new rule is patently unlawful and we will sue swiftly," Lee Gelernt, Deputy Director of ACLU Immigrants’ Rights Project said in a statement.

"We have been expecting something along these lines for some time now. We believe that the rule is an end run around the asylum laws Congress has passed and should be invalidated as inconsistent with the immigration statute," Gelernt told TIME magazine.

Columbia University Professor and Director of Columbia Law School's Immigrants' Rights Clinic Elora Mukherjee concurred with the ACLU and asserted the White House doesn't have the authority to change laws established by Congress.

"In our system of checks and balances, the code of federal regulations cannot be overwritten by executive fiat. The president can't just rewrite the law," she told TIME.

Trump's new rule says a migrant who wants to make an asylum claim in the U.S. must first have had to apply for asylum in either a neighboring country from where the migrant is from, or from the country en route to the U.S. even though Congress has established rules that say a migrant cannot be barred from seeking asylum in the U.S. based on where they are from, the report stated.

"This president, this administration, is trying to end asylum. This rule is another move to turn refugees with well-founded fears of persecution back to places where their lives would be in danger," Mukherjee argued.

U.S. House Speaker Nancy Pelosi slammed the Trump administration for overreaching its authority and violating the law. "The president is devastating lives, dishonoring our values and departing from decades of precedent and law in his haste to destroy the lifeline of asylum in America," Pelosi said in a statement.

Democratic Representative Bennie Thompson, chairman of the House Committee on Homeland Security, called the new asylum rule "xenophobic" and "racist", AFP reported. "It is unlawful and must be stopped by the courts. We need immigration policies that affirm the American values that the president is all too eager to trample on," said Thompson. 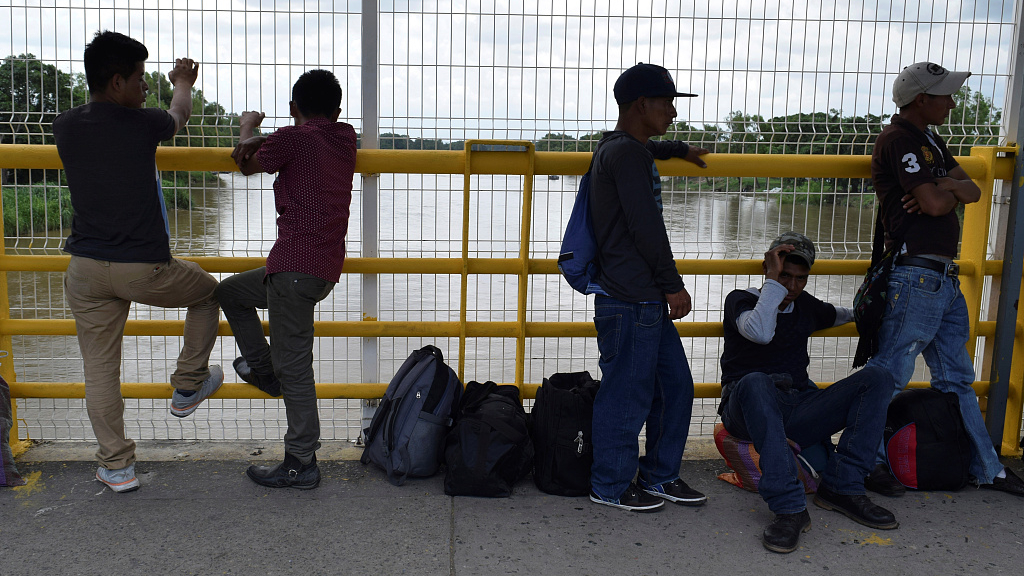 Internationally, the rule does not fall in line with what the UN refugee agency UNHCR details as conditions for a safe third country agreement, according to Kennji Kizuka, Senior Researcher and Policy Analyst at Human Rights First.

The UNHCR said it was "deeply concerned" about the measure, and that the new rules would “put vulnerable families at risk” and undermine international efforts to find a coordinated solution.

Kizuka told TIME the U.S. might begin seeing lawsuits from countries and international courts such as the Inter American Court of Human Rights should the U.S. begin returning migrants to unsafe countries.

The new asylum policy has reportedly sparked political turmoil already in two Central American countries – Mexico and Guatemala – both wary of having to accept responsibility for transiting migrants or those rejected by the U.S., AFP reported.

Mexican Foreign Minister Marcelo Ebrard said his country would not become a dumping ground for asylum seekers. "Mexico does not agree with measures that limit asylum or refuge for those that fear for their lives in their country of origin," he said.

Meanwhile, Guatemala's constitutional court granted an injunction Monday blocking President Jimmy Morales from signing a controversial deal with the U.S. that would oblige the Central American country to welcome migrants, at least in the short term.

Morales, who was under pressure at home not to seal the deal, called off White House talks with Donald Trump set for Monday – hours before the court's ruling late Sunday – which granted a provisional injunction to prevent Guatemala from becoming a "safe third country".