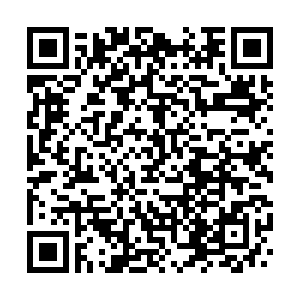 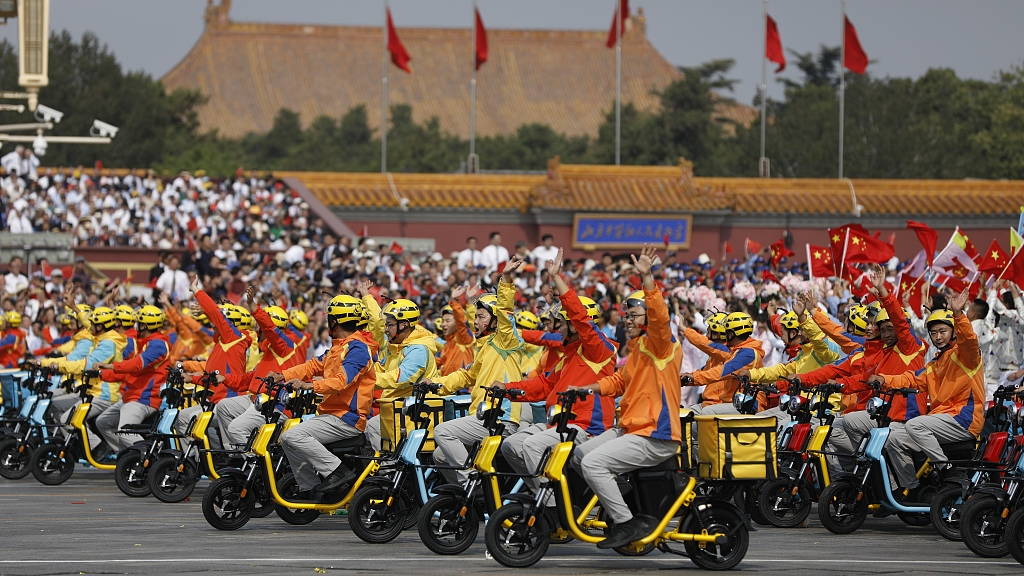 Usually at the bottom of society, delivery riders became the secret stars on Tuesday as the nation celebrated its 70th anniversary with a grand ceremony on Beijing's Tian'anmen Square.

On their baby blue e-scooters, wearing bright orange jackets, yellow helmets and a big smile, the food delivery riders that were leading the mass parade stood in sharp contrast to the camouflaged tanks and troops that had rolled and marched down the same road only minutes earlier during the largest military parade the country had seen in decades.

"Never in my life would I have expected food and parcel couriers at a mass parade!" a net user exclaimed on Weibo, a Chinese microblogging site. "I'm really moved," the user added. More than 85,000 people liked the post. 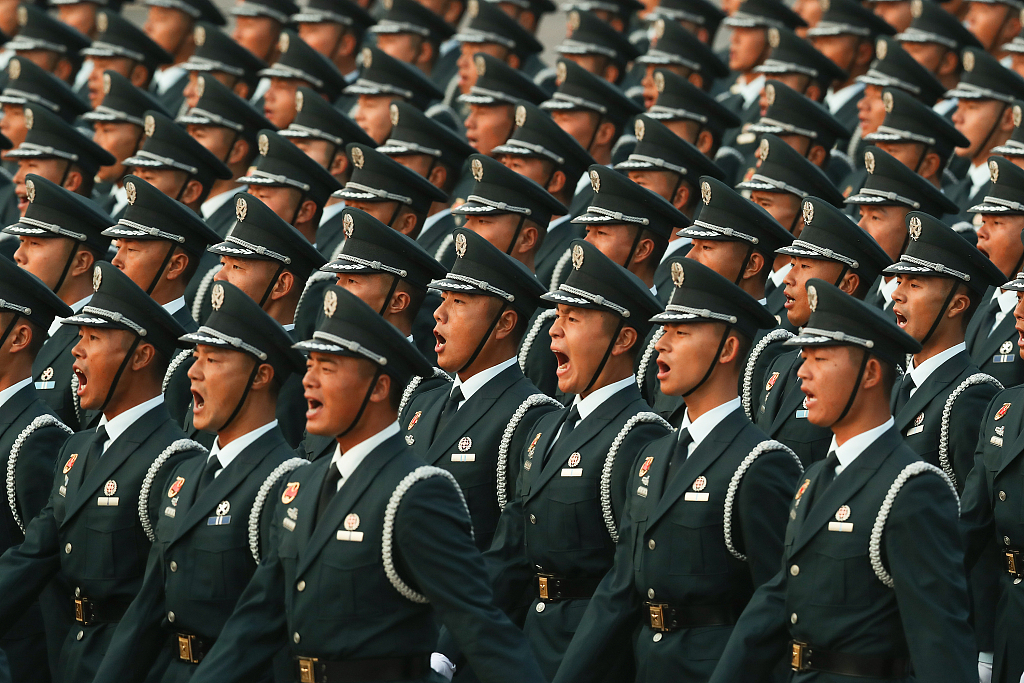 Soldiers of the People's Liberation Army shout during a rehearsal of the parade on October 1, 2019, on Tian'anmen Square, Beijing, China. /VCG Photo

Soldiers of the People's Liberation Army shout during a rehearsal of the parade on October 1, 2019, on Tian'anmen Square, Beijing, China. /VCG Photo

While the military parade visibly made many Chinese nationals proud by displaying advanced military prowess, the mass parade with delivery riders at its head unleashed the nation's gratitude. The hashtag #GuardiansOfTheStomach, a word play on the 2014 Marvel movie "Guardians of the Galaxy" that discussed the delivery riders, was viewed by more than 48 million people by Thursday. The official state media People's Daily created a widely shared GIF of the delivery riders in the parade, calling them "saviors."

It struck a chord with the over 700 million Chinese who watched the parade on their mobile phones and the many millions more who followed it on TV because food delivery and online shopping have become such an essential part of life in China. Be it in traffic or at their doorstep, the "little brothers," as people like to call the delivery riders, are part of the urban environment, as much as subway lines and skyscrapers.

E-commerce is a significant employment provider. At least three million people worked as food delivery riders by the end of 2018, figures from the two food delivery market leaders Ele.me and Meituan showed. Courier services being a lot more numerous, with 100 million packages delivered every day in China, the number of couriers is harder to estimate. The New York Times quoted one survey saying there were 1.2 million. 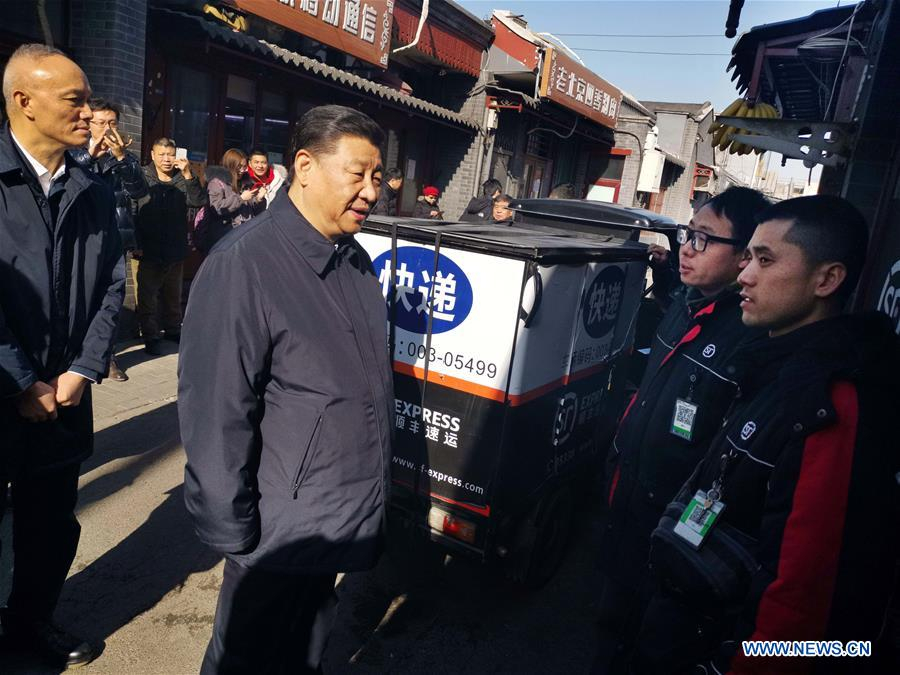 Xi Jinping talks with deliverymen in a hutong in the Qianmen area of central Beijing, China, February 1, 2019. /Xinhua Photo

Xi Jinping talks with deliverymen in a hutong in the Qianmen area of central Beijing, China, February 1, 2019. /Xinhua Photo

Xinhua News Agency established a profile of the typical delivery rider: Male, rural, making anything from 300 to 1,200 U.S. dollars a month. Half of them are aged below 30. The proportion of female delivery riders meanwhile seems to be increasing, with Jingdong, a Beijing-based courier service, claiming that female employees account for nearly 10 percent.

But more than having become a common sight and undeniable part of urban lifestyle in China, delivery riders highlight the huge impact that economic and digital transformations have had on Chinese people's lives in the past 70 years. The formation that the delivery riders were heading was not called the "Good Life Formation" for nothing. They symbolically stand for enhanced quality of life, job opportunities, abundant consumer choices, convenience and a modern lifestyle.

Read more: How people's lifestyle and society changed in past 70 years

Delivery riders are also a powerful representation  of the development of China's economy over the years. Cao Lei, director of the Internet Economics Research Center, said that e-commerce has become the main driving force for business innovation in the 21st century, the Chinese news site Economic Daily reported. In China, e-commerce accounted for 35.13 percent of gross domestic product (GDP) in 2018, according to the China E-Commerce Report (2018) released by the Department of Commerce and Information Technology of the Ministry of Commerce at the 2019 China E-Commerce Conference in May.

The sector is a massive domestic consumption booster, a motor for rural revitalization and an opportunity for Chinese sellers to access a global consumer market. E-commerce was a 713 billion U.S. dollar business in 2018, and the food delivery market was worth over 36 billion U.S. dollars in the same year in China. The industry is crucial for maintaining growth and development amid a general economic slowdown. 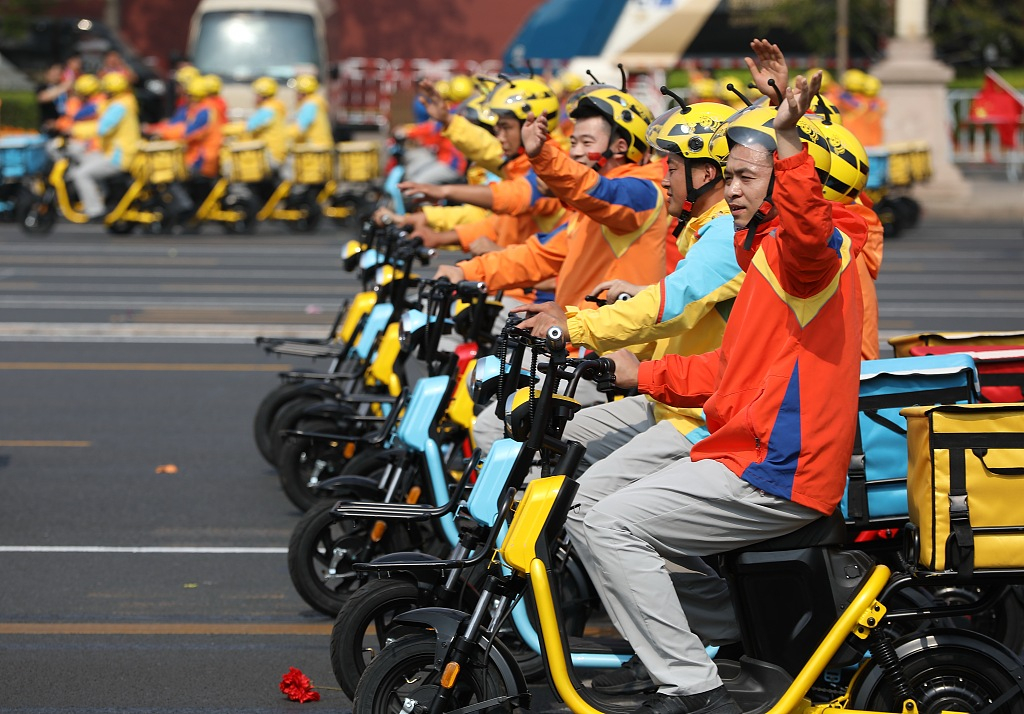 Food delivery riders drive their electric scooters during the parade marking the 70th anniversary of the People's Republic of China in Beijing, China, October 1, 2019.

Food delivery riders drive their electric scooters during the parade marking the 70th anniversary of the People's Republic of China in Beijing, China, October 1, 2019.

Placing a formation of delivery riders at the top of the mass parade that celebrated the 70th anniversary of the founding of New China finally gave well-deserved public recognition to these dispatchers, always on the run to deliver food and parcels to people's doorsteps, while enabling economic growth through their hard work.

"Many people cheered for the couriers in the parade. But when we encounter these low-class workers in our daily lives, we still look down on them. It never occurred to me that the present good life and economic miracle are supported by countless 'cheap laborers,'" a net user posted on Weibo.