Graphics: The risky politics of a Brexit election
By John Goodrich 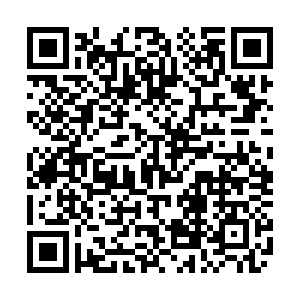 Fresh attempts to force a general election in Britain are planned in the days ahead.

An election is always a gamble, but a poll in the midst of Brexit chaos holds huge risks for the two main parties in particular – and that could mean big opportunities for others.

The electorate is more volatile than ever, according to British Election Study researchers, and the political dynamics shift daily. So what are the key factors to watch?

With the House of Commons gridlocked and Prime Minister Boris Johnson's Conservatives attempting to govern with a majority of minus 45, an election is all but guaranteed in the near future.

But the timing is crucial. An election before the first stage of Brexit is settled would probably – however bored of it voters may be – end up largely as a rerun of the 2016 referendum. 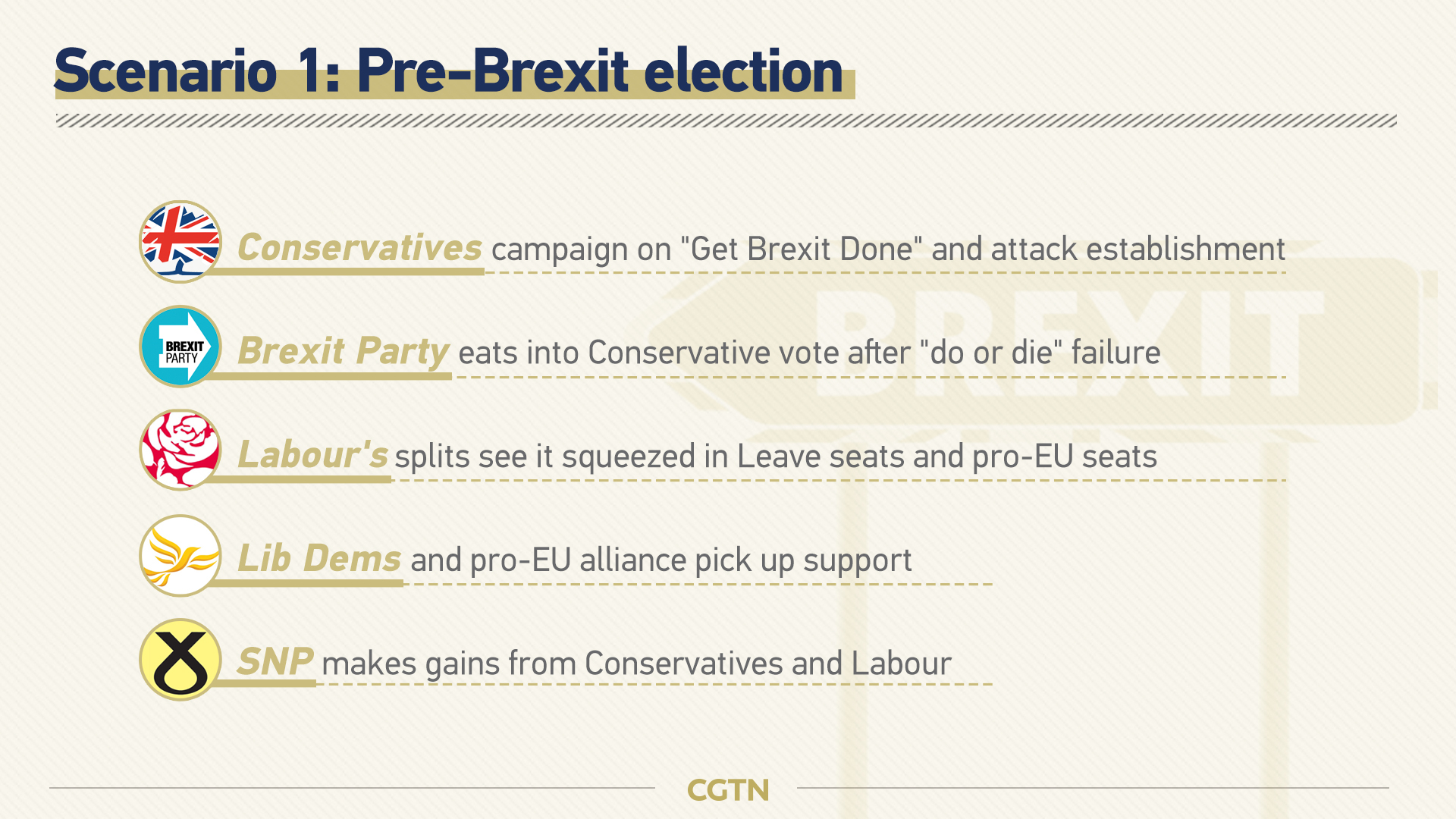 Until the campaign begins in earnest however, it's impossible to know what voters want – many may be refreshed by a focus on issues ignored because of the dominance of Brexit. An election after a Brexit decision would likely play out against more traditional lines. 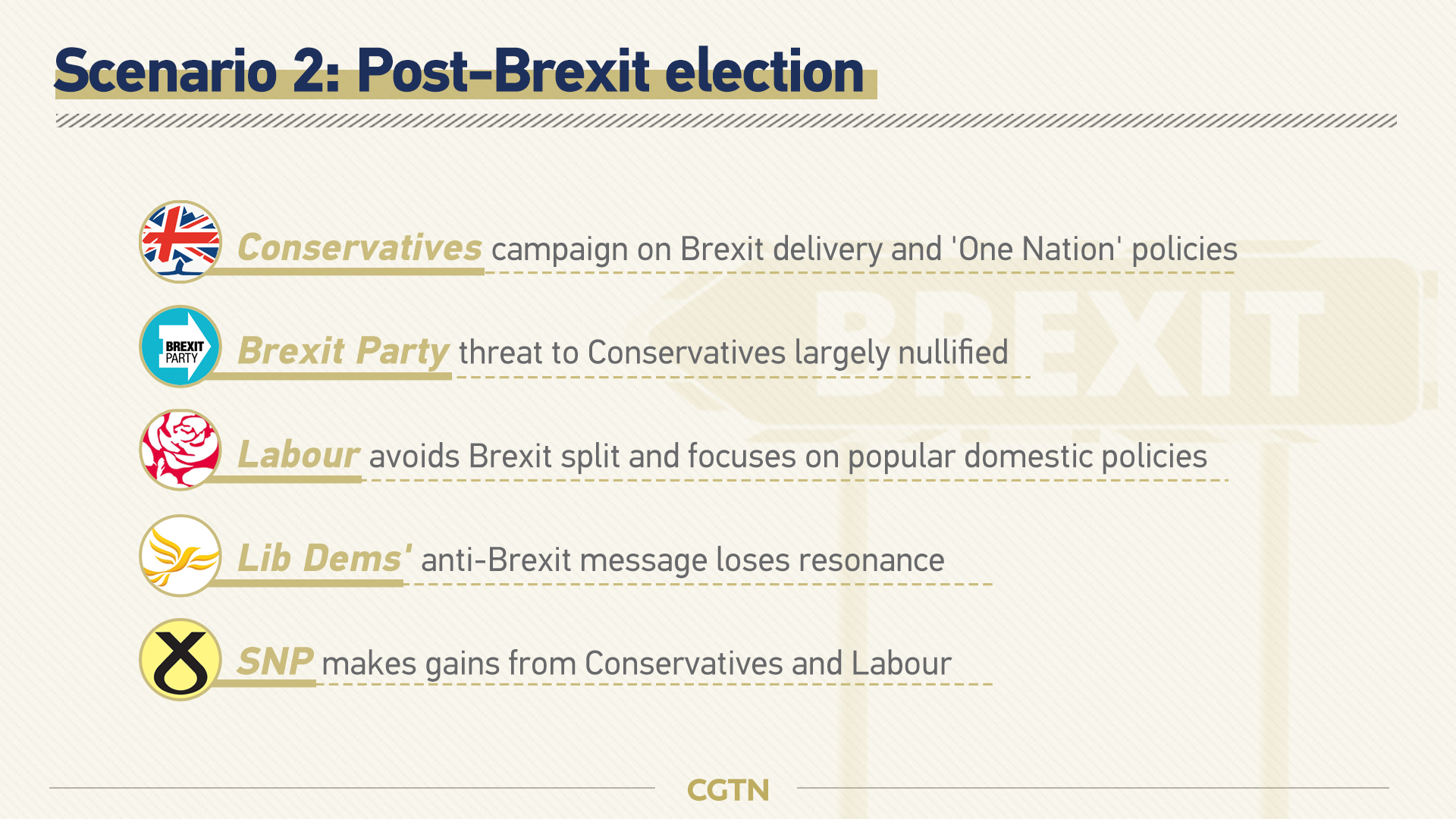 And for smaller parties, mundane issues like student term times are important. A mid-December election would come as students begin their Christmas breaks, potentially hampering the prospects of pro-EU parties in Remain-friendly university towns.

Johnson will attempt to set up an election via the Fixed-Term Parliaments Act (FTPA) on Monday, and his advisers have said that if it fails they will continue to hold votes on subsequent days.

However, the Liberal Democrats and Scottish Nationalists (SNP) have also tabled a proposal for an election on December 9 via an amendment to the FTPA, so long as the EU grants a three-month extension to the Brexit deadline.

The EU decision on a Brexit extension – and the timing of any announcement – will be pivotal to any election vote. 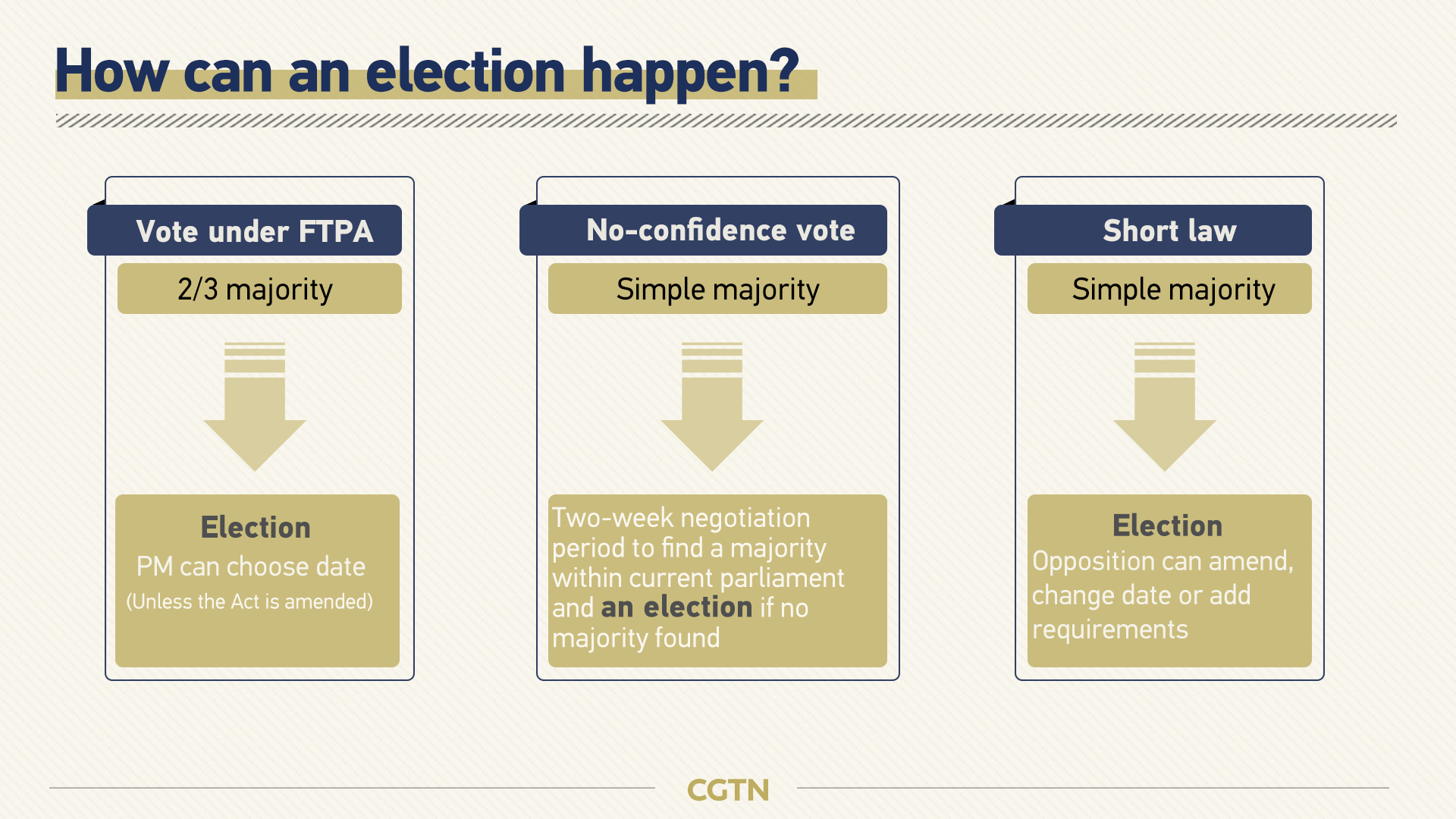 If the government backs the amendment, it would stand a chance of success. If it doesn't, the SNP plans to table a no-confidence vote and try to limit the two-week negotiating period.

The wildcards are the Labour Party, which is split on whether to back an election and may abstain in Monday's vote – making a two-thirds majority impossible – the 35 independents and the 10 Democratic Unionists, who Johnson has alienated over Brexit. 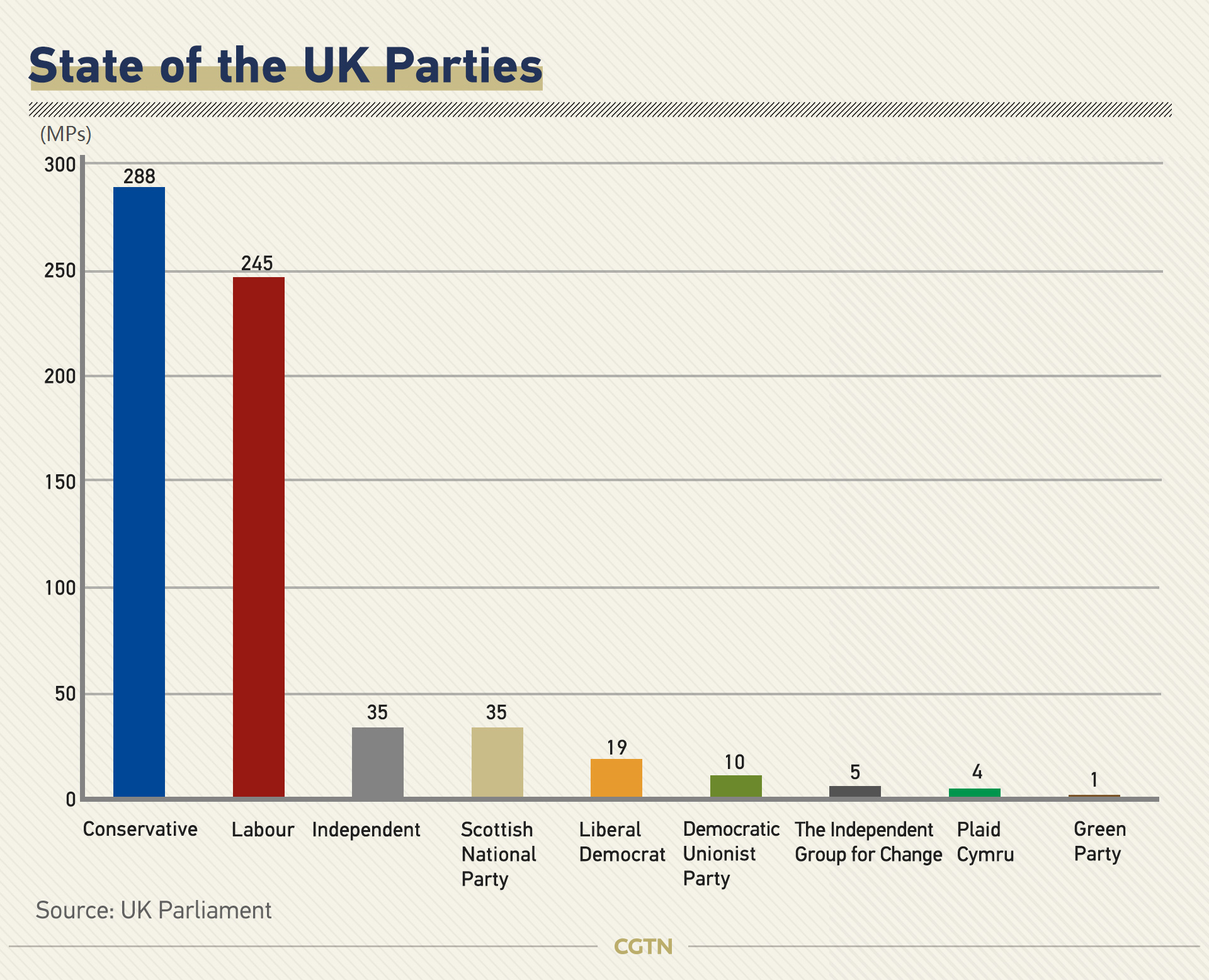 To win a FTPA vote to hold an election on December 12, Johnson will need to find 146 more votes from opposition parties to total at least 434 MPs – and that's assuming all Conservatives back him.

A simple majority – required to pass a short law, a no-confidence vote or the Brexit withdrawal deal – could be won with 320 votes.

The leadership of all the parties insist they want an election, but the terms under which they would back a poll varies dramatically.

The Conservatives are calling for an election on December 12, following a vote on Johnson's Brexit deal. However, there is a major trust issue – opposition parties are unlikely to vote in favor. 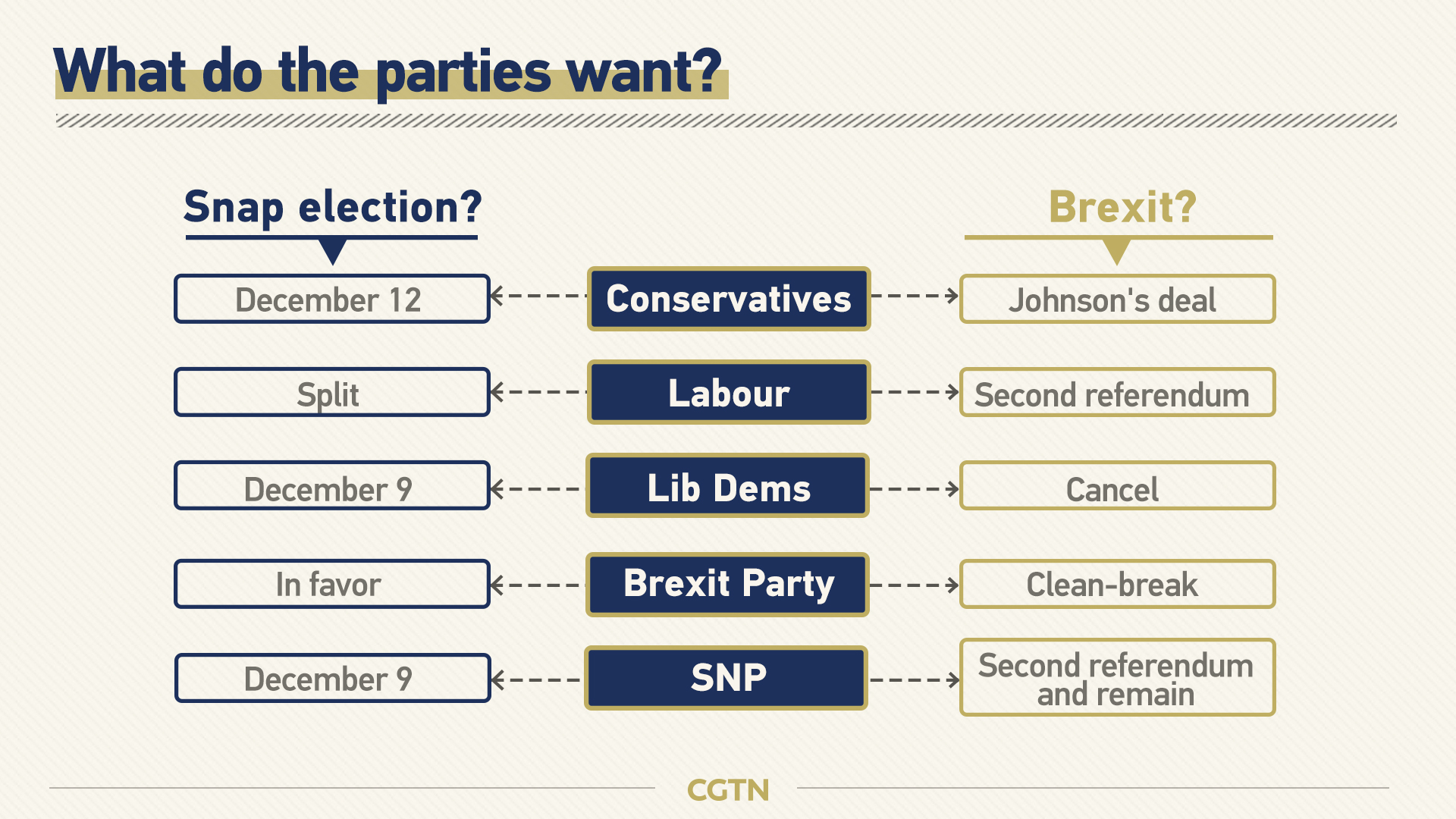 Labour leader Jeremy Corbyn has repeatedly said he wants an election, but no-deal needs to be off the table first. But the party is split, with many MPs concerned an election before Brexit is sorted could be disastrous.

The Liberal Democrats, Brexit Party and SNP see a big advantage in an election before a decision is made on Brexit – they're all likely to perform well in a Brexit election.

Polling is extremely volatile, not least because the backdrop to any election is not yet known.

All polls over the past two weeks asking "how would you vote in an election today" place the Conservatives ahead, varying from four points with ComRes to a huge 16-point advantage with Opinium. The most recent poll, from YouGov, gives Johnson's party a 13-point lead.

Both the Liberal Democrats and the Brexit Party have profited from absolutist approaches to Brexit, and the SNP is expected to pick up seats from the Conservatives and Labour in Scotland. 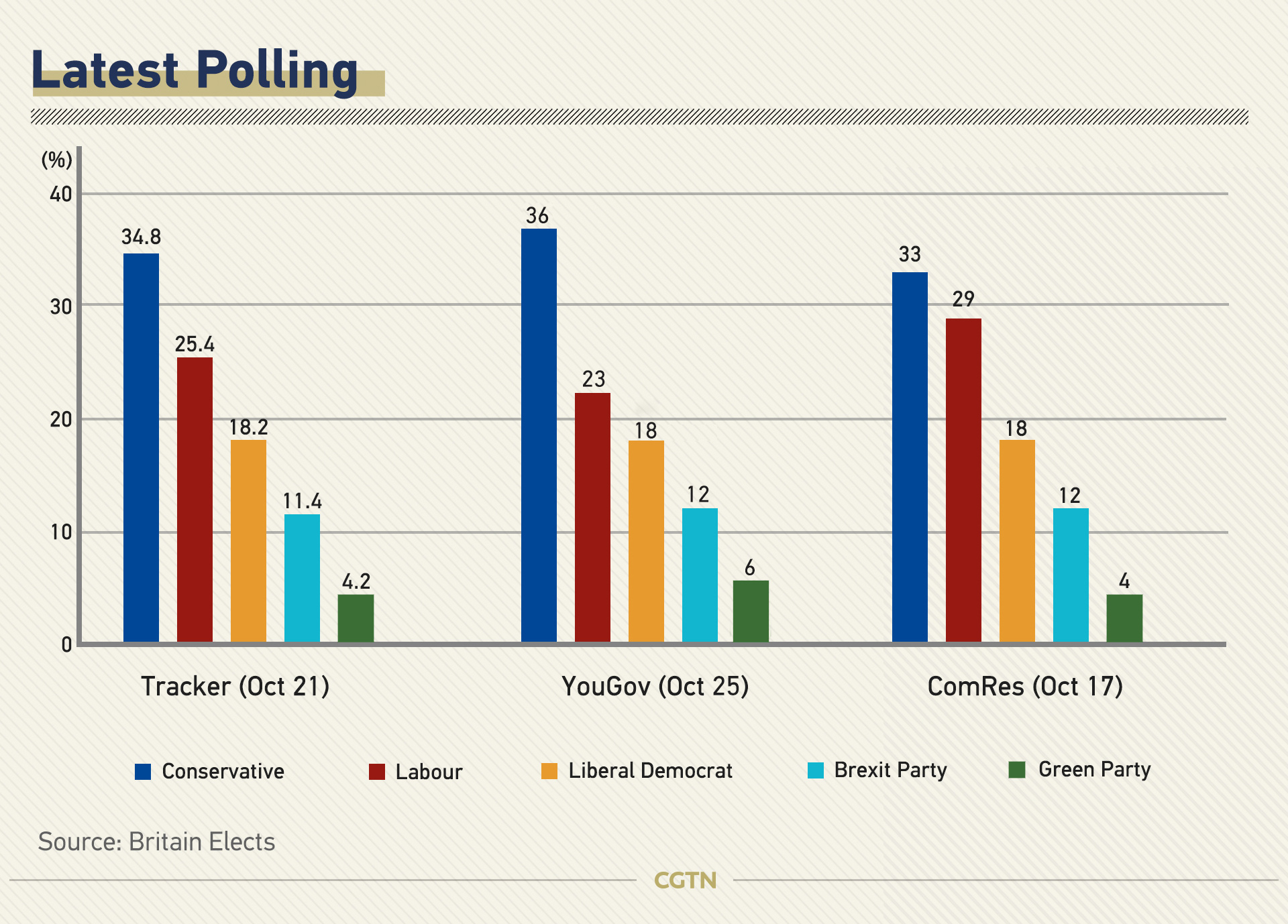 Labour look to be struggling, but it's not all bad news. When ComRes asked how people would vote on the hypothetical that an election is held with Britain still in the EU after October 31 however, the party led the Conservatives by one point.

And Johnson will no doubt have the lessons of 2017 on his mind. Then prime minister Theresa May called a snap election with a 20-point polling lead over Labour and ended up losing the Conservative majority, edging Corbyn's party out by just two points.

Johnson is a better campaigner than May and has a Brexit deal to sell, but 2017 showed how quickly the polls can change when a campaign begins and other parties receive more coverage.

The only certainty is that an election will be volatile – and a major gamble for both Johnson and Corbyn.

In The Spotlight: John Bercow, the unlikely Brexit star