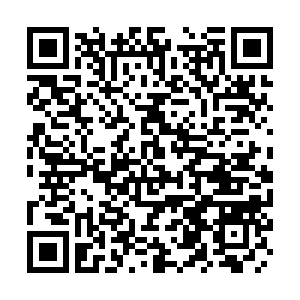 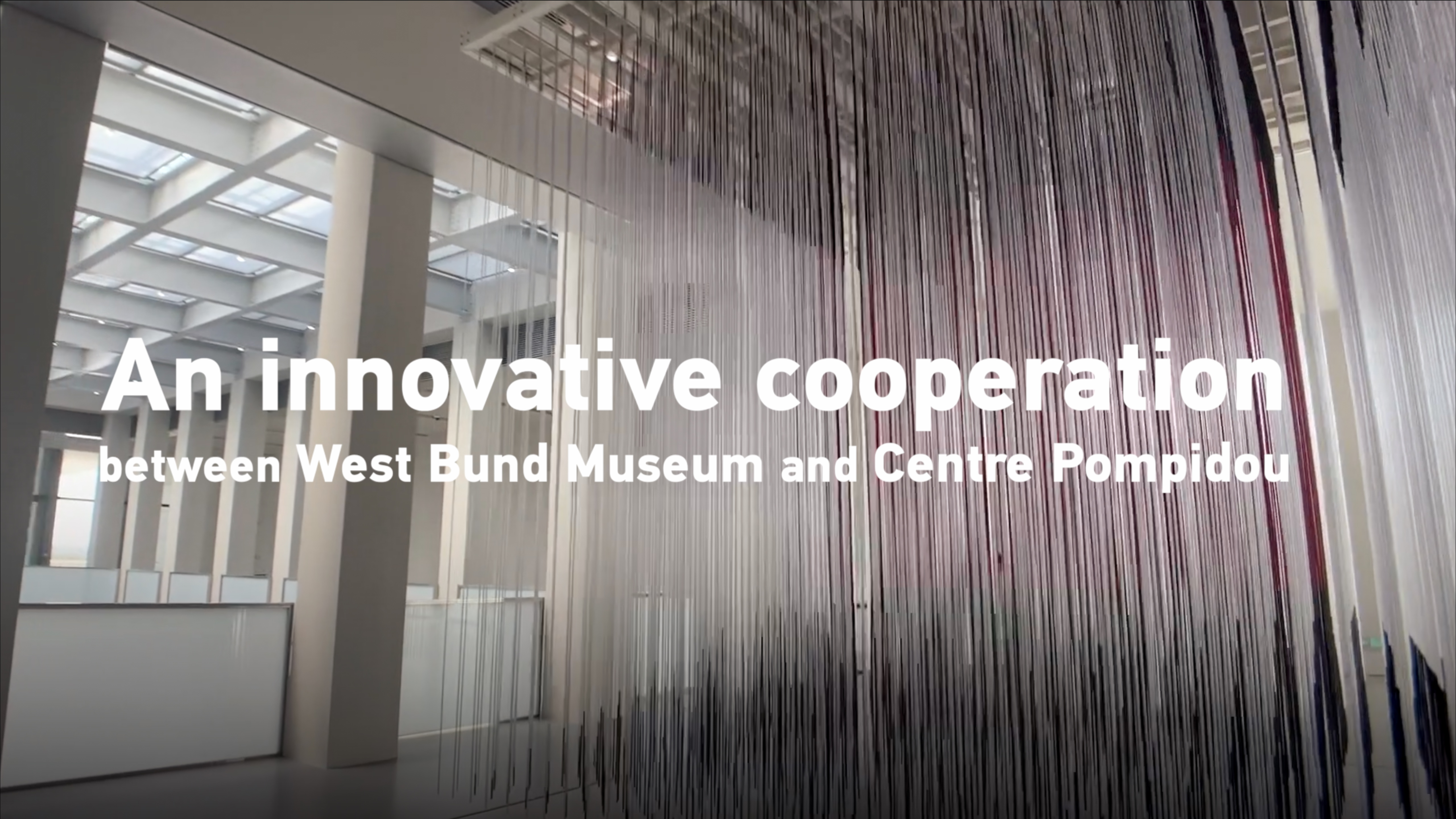 A five-year cooperation project between the newly-opened West Bund Museum and the Centre Pompidou kicked off in Shanghai in early November. It is an innovative attempt that sets an example for future collaborations between domestic and international cultural institutes. 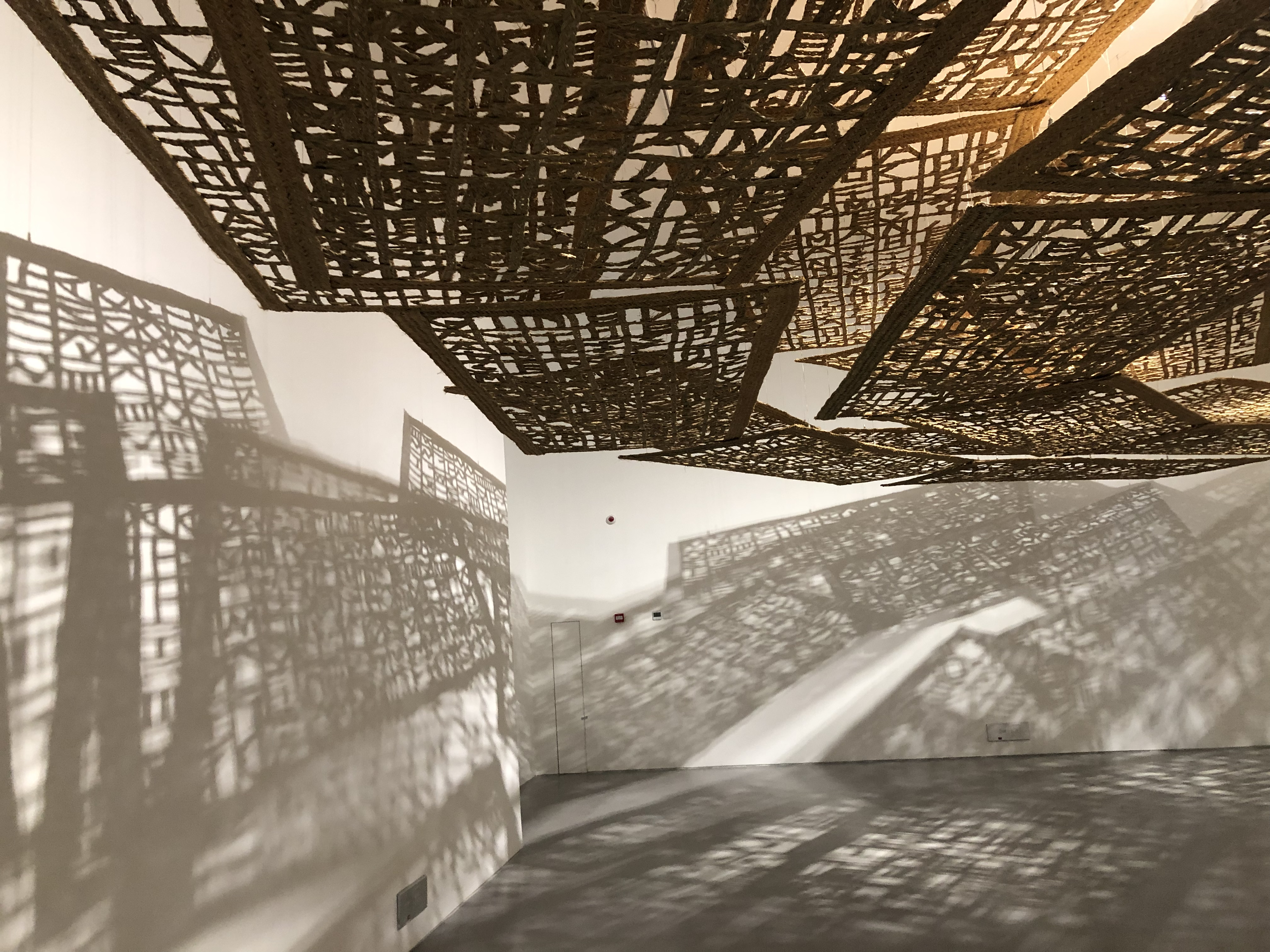 An installation at exhibition "The Shape of Time, Highlights of the Centre Pompidou Collection" held at the West Bund Museum in Shanghai, China. /CGTN Photo

An installation at exhibition "The Shape of Time, Highlights of the Centre Pompidou Collection" held at the West Bund Museum in Shanghai, China. /CGTN Photo

"It's the occasion for the Centre Pompidou to open up a project over five years entirely based on the Pompidou collections," said Marcella Lista at the West Bund Museum along the bank of Shanghai's signature Huangpu River.

The permanent exhibition "The Shape of Time" features around 100 artworks of famous artists, ranging from Marcel Duchamp and Pablo Picasso to Zao Wou-Ki and Zhang Huan. The works are from the Centre Pompidou's collections in the 20th and 21st centuries.

"The theme is inspired by something that is a very current object of debate all over the world, which is the way camera networks and monitoring networks collect data from citizens all over the world and how we can, with artistic tools, have a different gaze on this issue," said Lista.

Altogether, three 18-month-long permanent exhibitions and about 10 six-month-long temporary exhibitions will be held at the museum in the five-year run. However, Centre Pompidou's ambition is higher than that. It aims to build not only a museum with visual artwork, but also a place for creation for cinema, dance, music, theater, performance, and artistic education.

"This is the first collaboration over a long period of time, so it was more about creating an institution and providing the expertise to think of how this building could be fit to host all these different series of events," said Lista. "The idea is really to go across all the artistic disciplines." 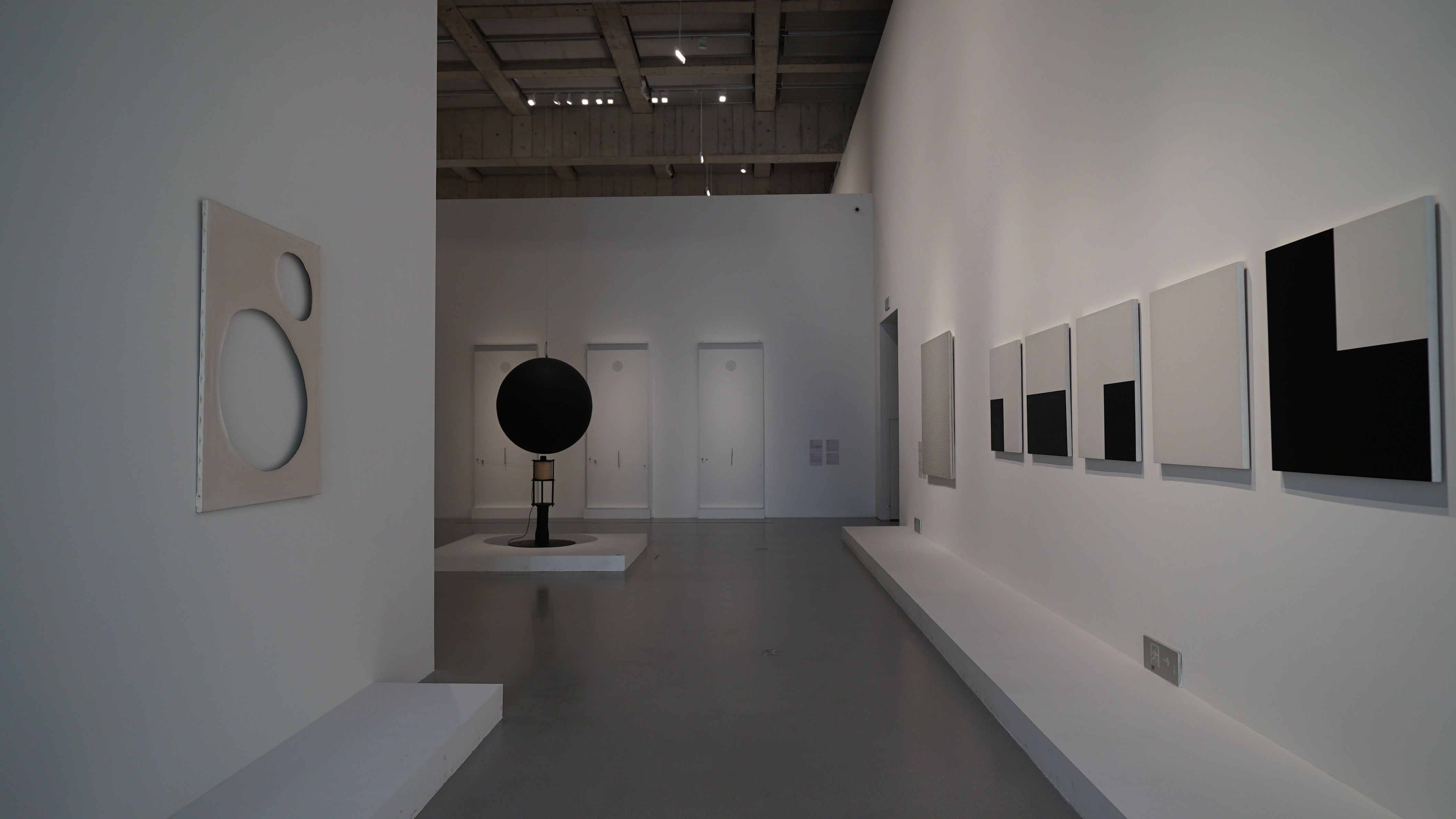 Exhibits at "The Shape of Time, Highlights of the Centre Pompidou Collection" held at the West Bund Museum in Shanghai, China. /CGTN Photo

Exhibits at "The Shape of Time, Highlights of the Centre Pompidou Collection" held at the West Bund Museum in Shanghai, China. /CGTN Photo

Although it is the first long-term project, the Centre Pompidou has been targeting the Chinese market, especially Shanghai, for quite some time.

In December 2012, the "Electric Fields: Surrealism and Beyond" exhibition unveiled at the Shanghai's Power Station of Art, featuring 109 artworks of surrealism from the Centre Pompidou's collections.

"We would like to respond to Chinese landscape in terms of what the institutions devoted to arts are offering this country," said Lista, adding that China has "very important major museums for ancient art and a very strong sense of conservation of heritage," but does not "have so many museums that address the 20th century as one continuous narrative."

That's why "The Shape of Time" was opened to reinforce the vision of the 20th century as a historical space for transition from modern to contemporary art.

"It's interesting not to affirm the European model as the model, but just to propose one example of this historical construction," she added.

The Chinese art circle is also an important target for Centre Pompidou, despite that it has collected more than 100 piece of artworks, both traditional and contemporary, by Chinese artists.

"The idea is to engage in a conversation with the artists and the professionals, all of China and in Shanghai. And this is what we have been doing in the years before opening this museum, and encounter all these actors of the art scene and ask: What do you expect from the Centre Pompidou in China? How can we take part in this landscape?" said Lista. 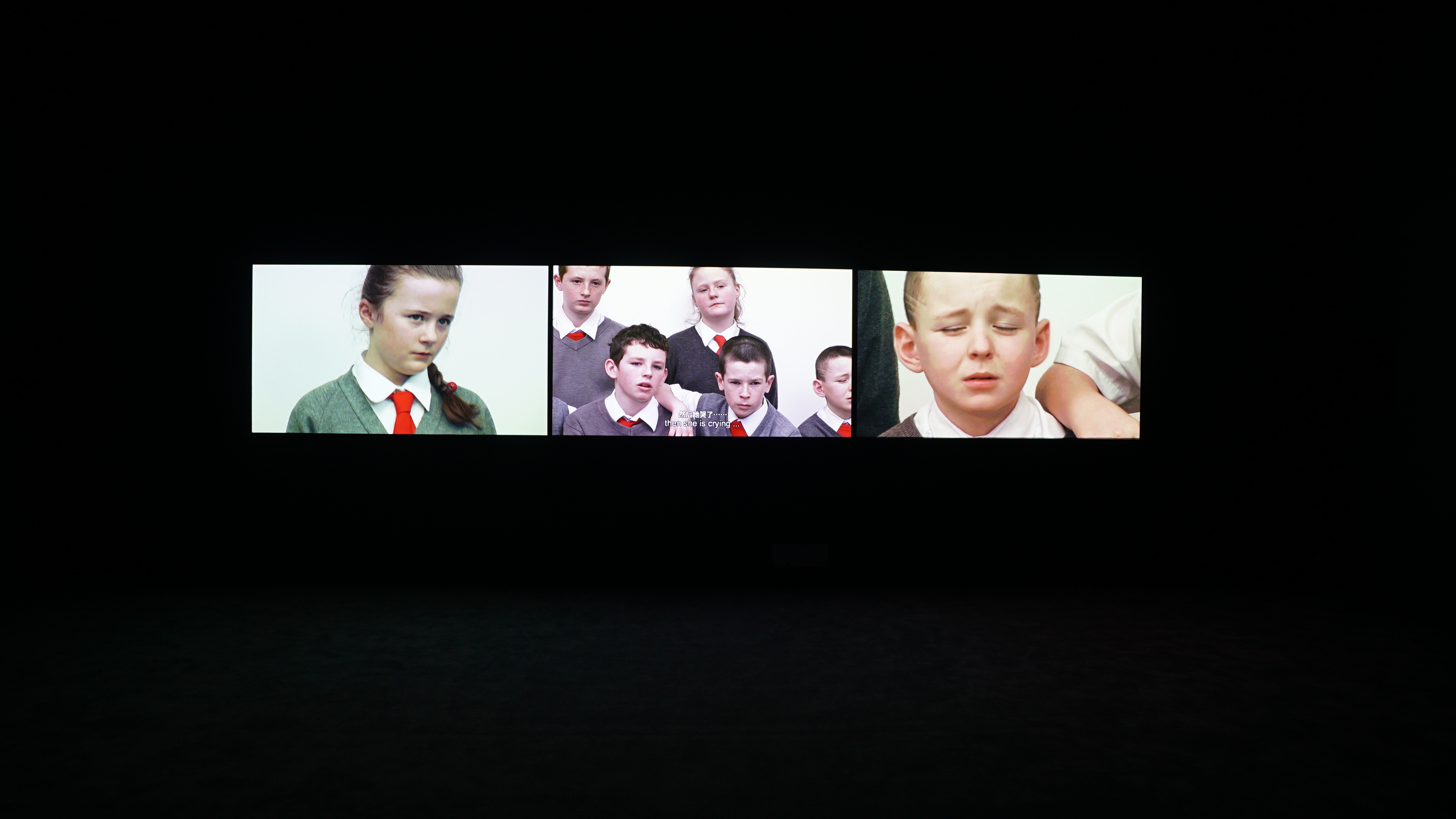 A clip from "Observations, Highlights of the New Media Collection" held at the West Bund Museum in Shanghai, China. /CGTN Photo

A clip from "Observations, Highlights of the New Media Collection" held at the West Bund Museum in Shanghai, China. /CGTN Photo

This cooperation is not an accident. Regraded as one of the most important contemporary art center in the world, the Centre Pompidou has been expanding its influence outside France in recent years.

It opened its first offshoot Centre Pompidou Malaga in Spain in 2015, and set up the largest cultural institution in Brussels, KANAL - Centre Pompidou, in 2018. This year's project in Shanghai is the first of its kind in Asia, unveiling a new way of cooperation.

"The choice of Shanghai... It's one of the most dynamic (city) in Asia at the moment, and all the new infrastructures of places devoted to art are really very challenging ones," said Lista.

The West Bank of Shanghai was once an abandoned industrial area, known for aircraft manufacturing and cement industries. After the relocation of industrial plants, the Shanghai government transformed the area into a "cultural corridor" stretching 11 kilometers along the river bank.

According to the plan, there will be eight art galleries, eight theaters and four public art centers along the corridor, targeting art communities such as the Left Bank in Paris and South Bank in London.

In the past few years, cultural institutes, such as the Long Museum, Yuz Museum and Shanghai Center of Photography, have entered the West Bank, attracting a large number of art lovers. In 2018 alone, the West Bank held 92 exhibitions and art events with 1.1 million visitors.

It is believed that the cooperation project between the West Bank Museum and the Centre Pompidou will make the West Bank more attractive, especially to foreign visitors.

"I would say that Pompidou was not alone. It was, from the start, a teamwork of two institutions: the West Bund Museum and the Centre Pompidou," said Lista.