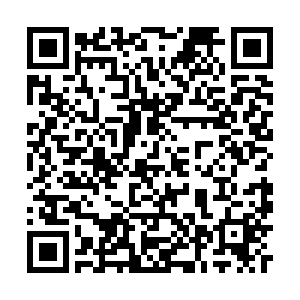 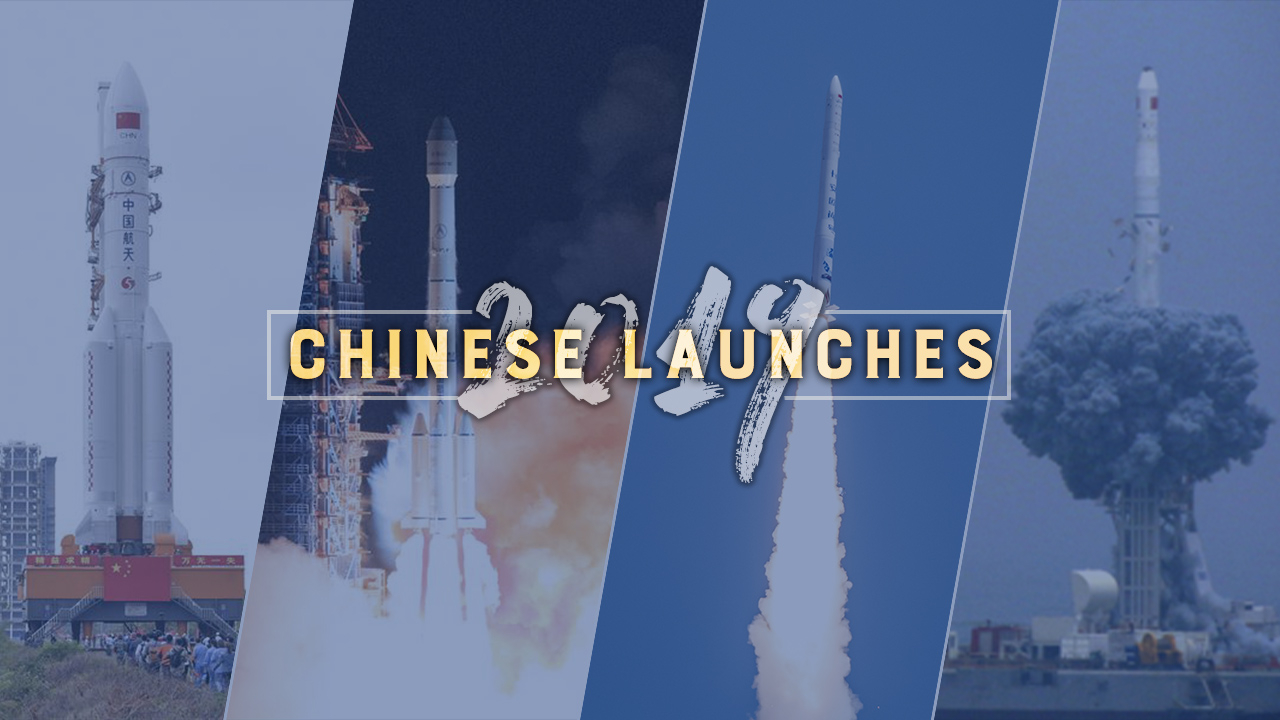 The world is waiting for the launch of Long March-5, a heavy-lift rocket from the Long March (CZ, short for Changzheng, meaning "Long March") series that is crucial for the country's space program. CGTN looks back at China's rocket launch activities this year, which was marked with highlights and surprises.

More launches than anywhere else

There have been 33 Chinese orbital launches so far this year. As 2019 draws to a close, China is set to finish well ahead of second-placed Russia, currently with 24 launches, and United States – 19 launches.

China has already led the world in orbital launches since last year. 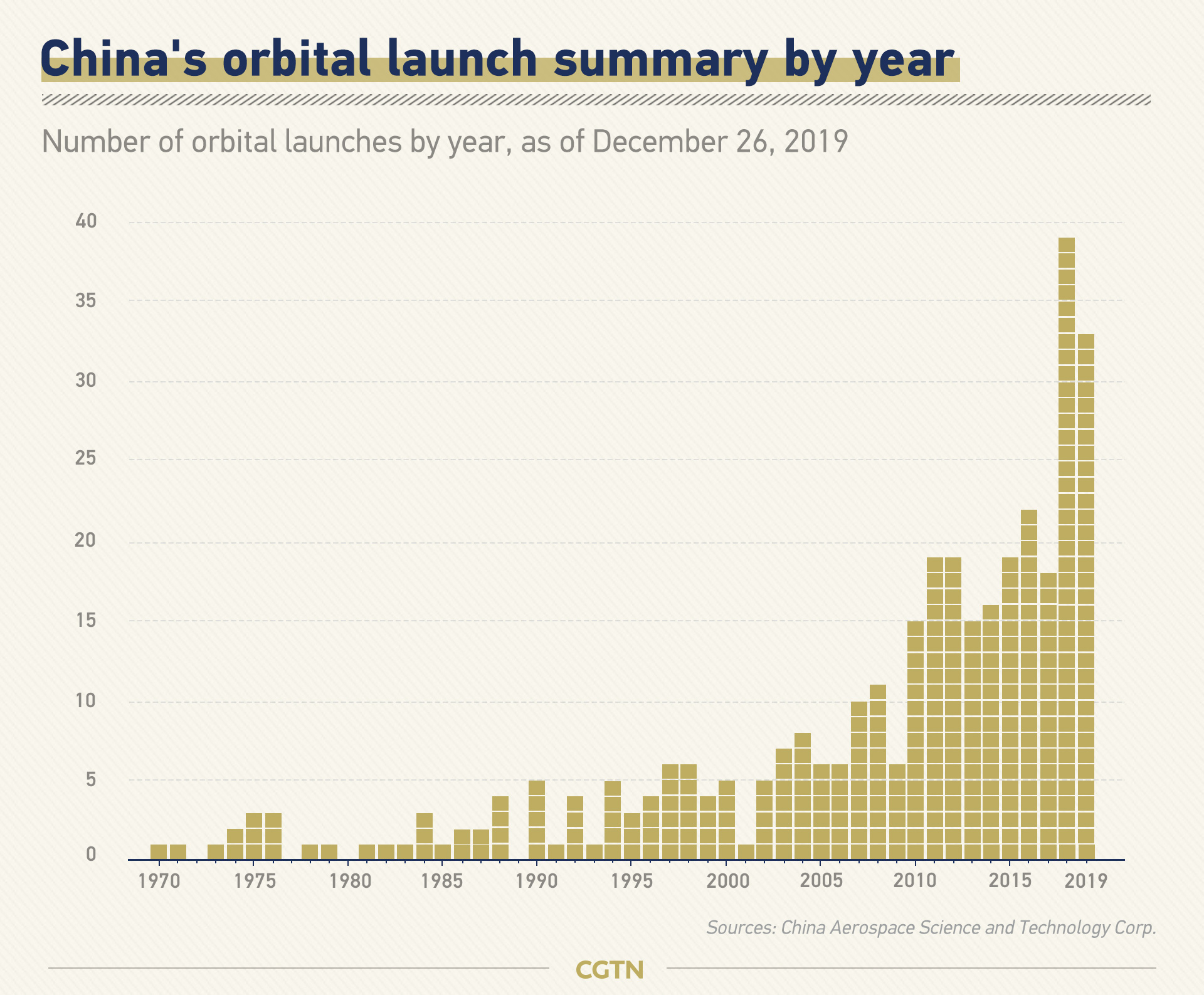 In June, China completed the first sea-based rocket launch, becoming the third country after the United States and Russia to successfully perform such a mission.

A Long March-11 solid propellant carrier rocket blasted off from a mobile launch platform in the Yellow Sea off Shandong Province at noon.

China's other four satellite launch sites are all located inland. Compared with conventional land-based launches, a sea mission has a lower risk, increases the rocket's carrying capacity, lowers launch costs and extends the lifespan of some satellites. 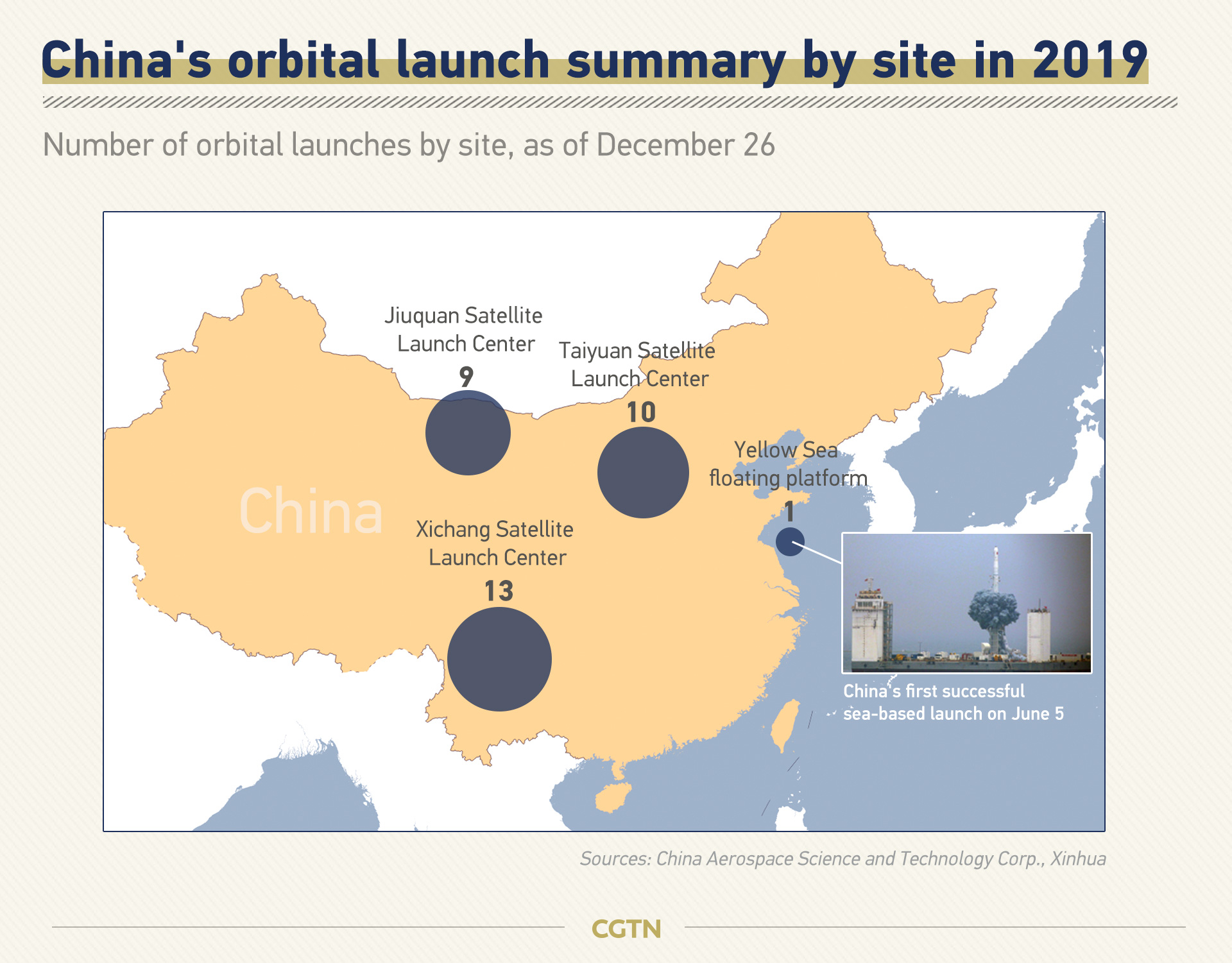 The Long March-11 and the long-awaited Long March-5 both belong to China's famed Long March rocket family. Most of the orbital missions this year are, as usual, carried by the series.

Developed by the China Aerospace Science and Technology Corporation (CASC), the Long March rockets have been at the heart of China's space program since 1970, when a Long March-1 carrier rocket launched the country's first satellite, Dongfanghong-1, into orbit. The series is responsible for over 95 percent of all the launch missions in China.

There are 17 types of Long March carrier rockets. Here are the types used in the 2019 orbital missions. 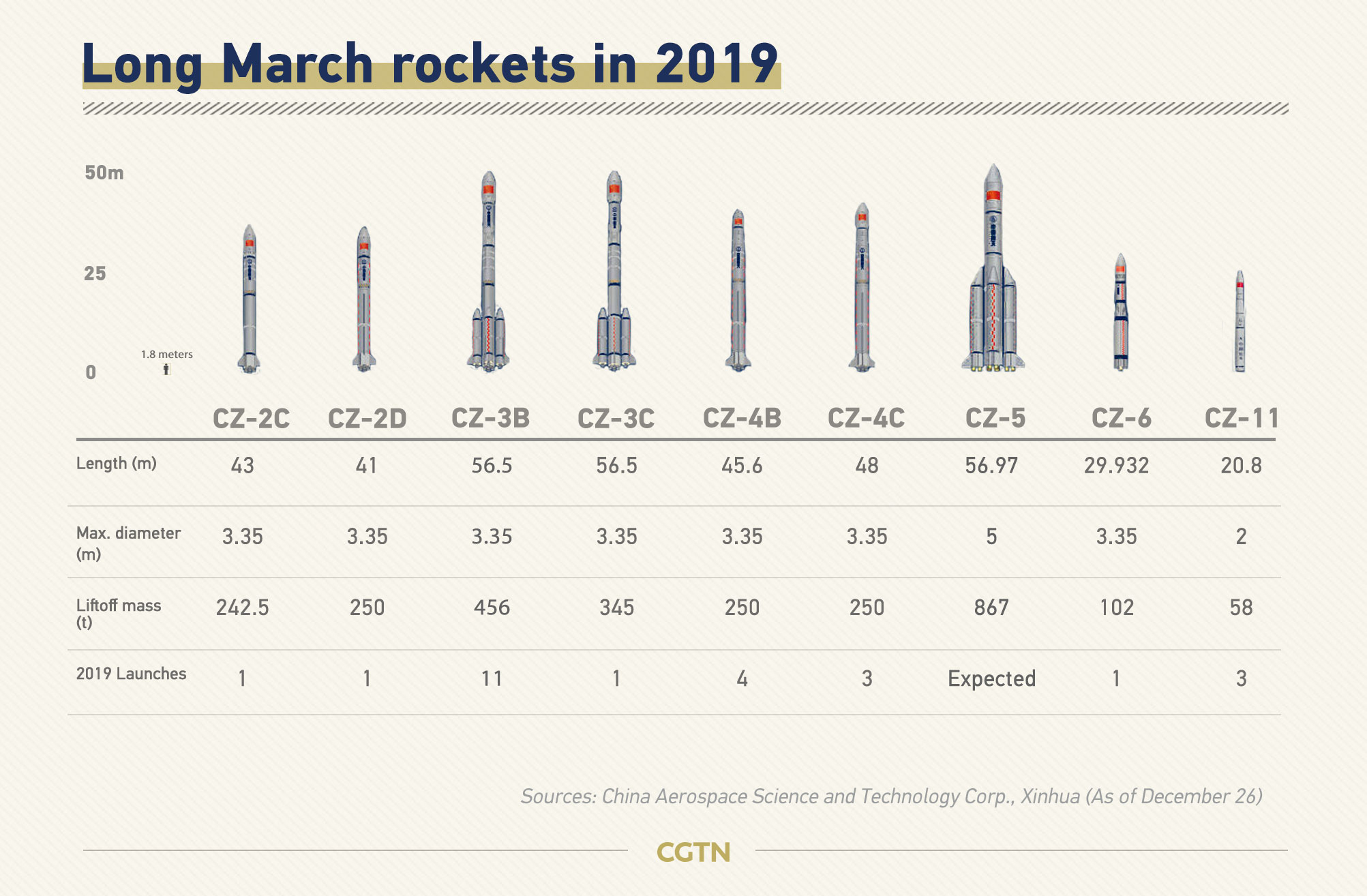 The "Ace team," China's Long March-3A series comprising the Long March-3A, 3B, and 3C, are the mainstay of current China's space launching missions. Long March-3B rockets carried out more missions than other types this year.

They completed the 100th in April, accounting for about a third of China's all carrier rocket launches.

2019 is not just a year for the Long March series to shine. In the middle of this year, a Beijing-based company iSpace became the first Chinese startup to send a rocket into orbit.

In recent years, Chinese private space companies have marched into a field long dominated by state-owned giants. A market report showed that China had seen over 100 registered private companies in the commercial space industry by the end of 2018.

This month, two Kuaizhou-1A rockets developed by a company under the CASC fired into orbit within six hours from the Taiyuan Satellite Launch Center, setting a record in China's commercial launching.

China's major orbital missions for next year include sending a Mars probe with a Long March-5 rockets, and to use that same carrier to deliver the Chang'e-5 probe to the moon to bring back samples of lunar rocks. 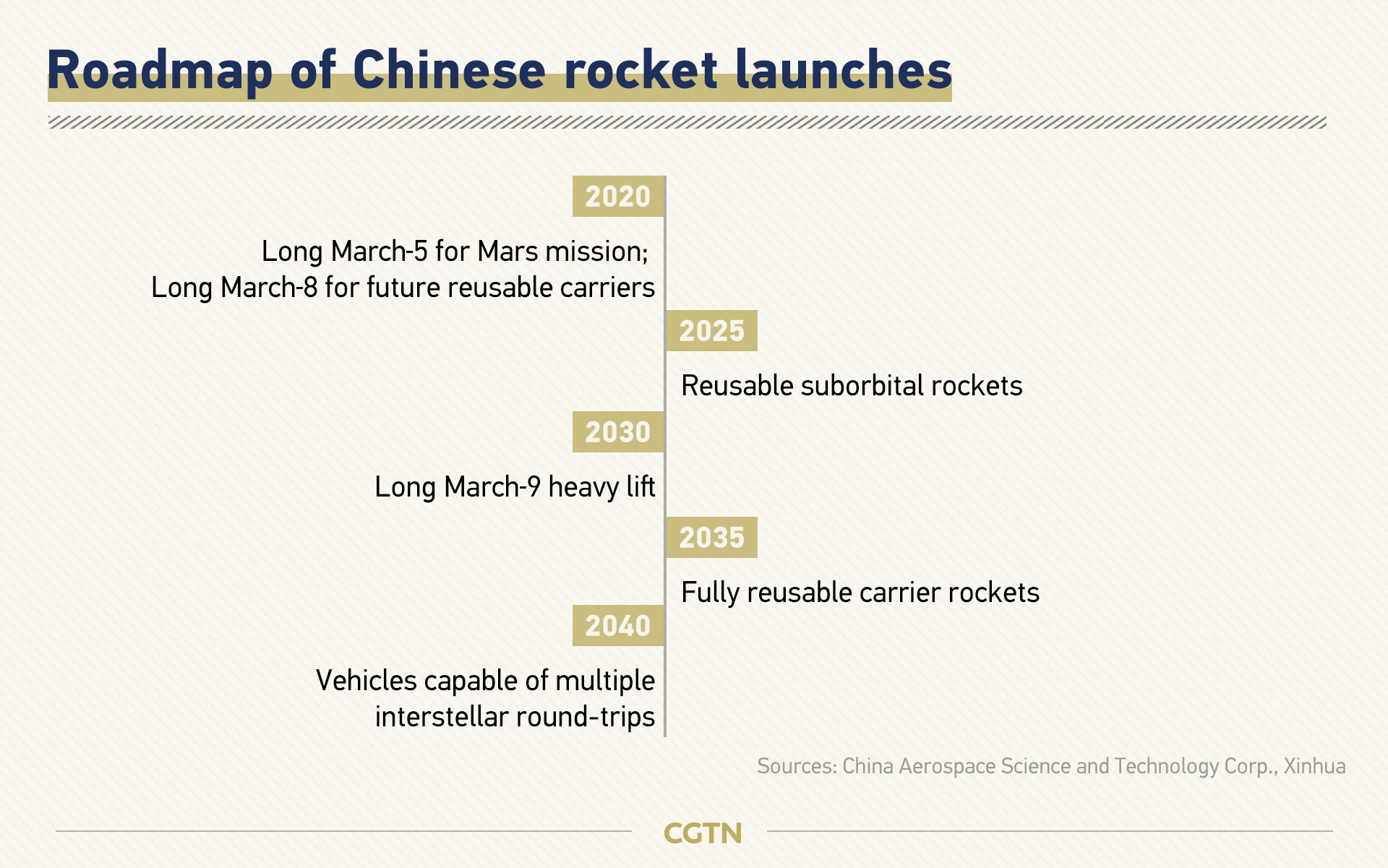