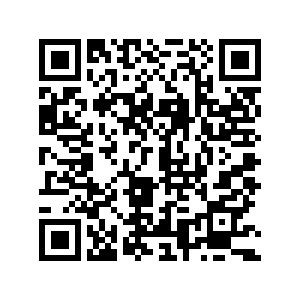 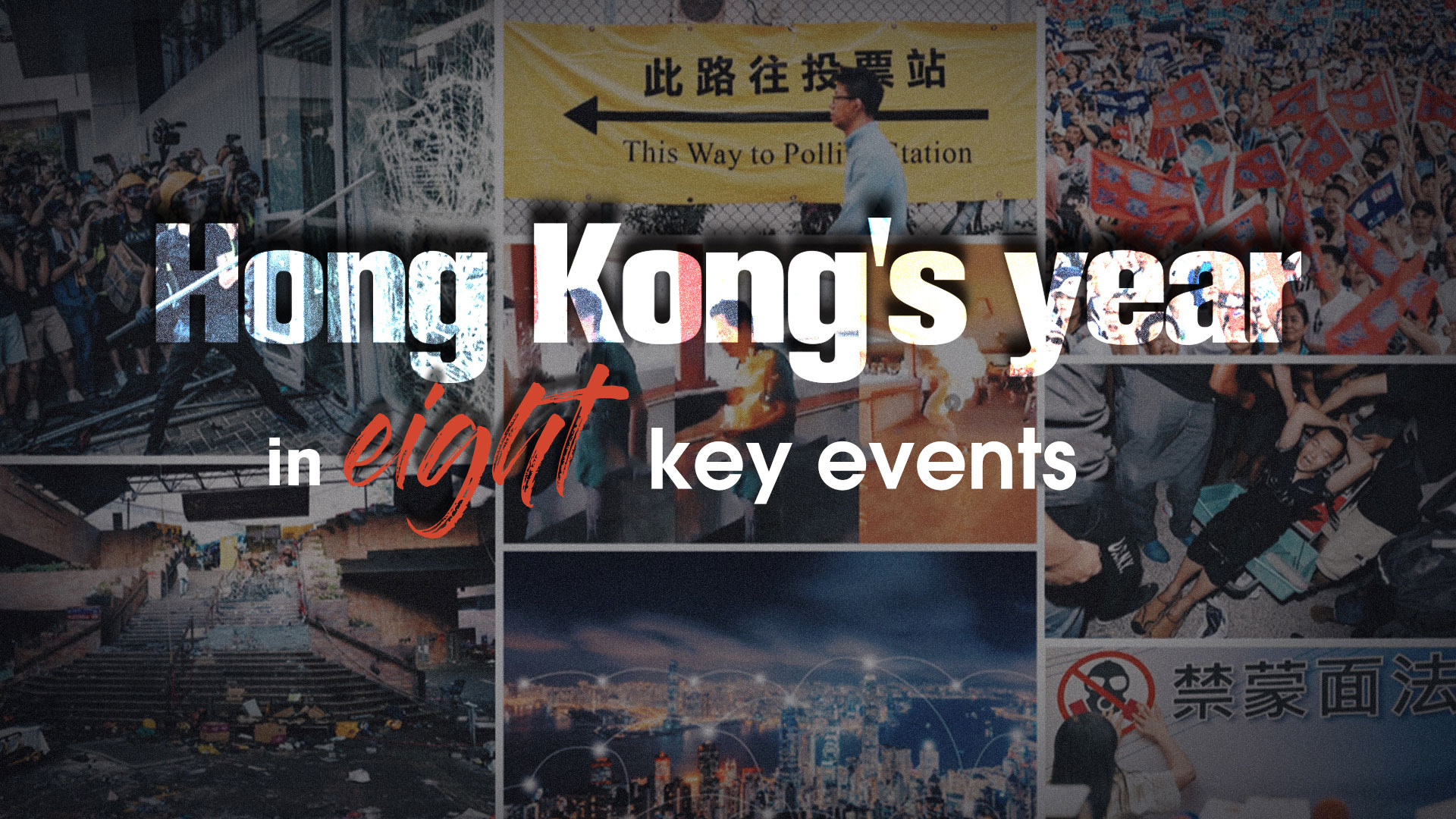 Turmoil over amendments to a now-withdrawn fugitive bill has dragged on in the Hong Kong Special Administrative Region (HKSAR) from summer to winter on all fronts. Seven months later, a series of events that unleashed a side of Hong Kong that no one ever thought existed seem like a distant memory.

In an upheaval that no one foretold, spiraling atrocities that paralyzed transport system and hit businesses in the Asian financial hub came to define the year.

On July 1, a day which should have been a happy anniversary to mark the return of Hong Kong to its motherland and the establishment of the HKSAR government, a group of radical protesters broke into the Legislative Council (LegCo) building, smashing the building's glass walls with iron rods, attacking police with toxic chemical powders and unidentified corrosive liquid. 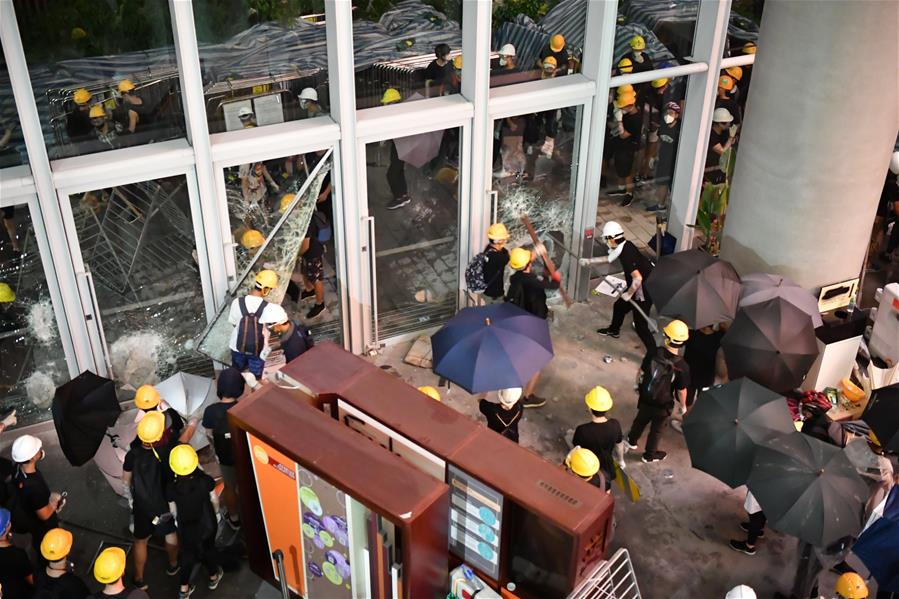 Upon entering the building, they vandalized the assembly hall and the regional emblem, tore up a copy of the Basic Law on the podium, displayed the "dragon and lion" flag symbolizing "Hong Kong Independence," and incited the formation of the so-called "provisional government".

Beating up a reporter

Fu Guohao, a journalist from Chinese mainland media outlet Global Times, was brutally assaulted and seriously injured by the protesters at Hong Kong International Airport, triggering widespread condemnation and outrage on social media. Hu Xijin, editor-in-chief of Global Times, later confirmed the news on Weibo and said they had contacted the Hong Kong police immediately to rescue him. 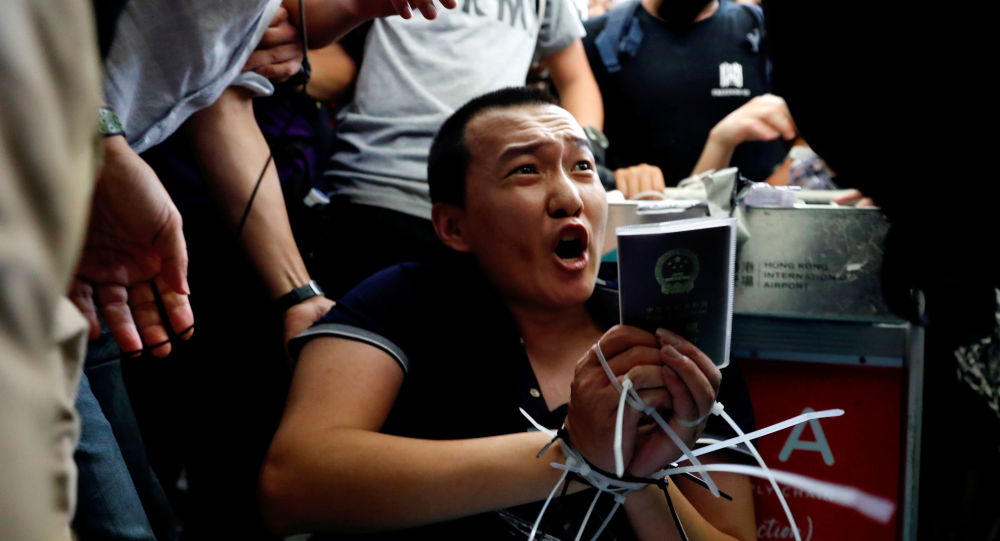 Facing the rioters' savage acts, Fu said: "I support Hong Kong police, you can beat me now." His words have received high praise and support of netizens who have applauded him for being a man of iron.

Later that morning, paramedics arrived at the scene but had little access to Fu as protesters surrounded and tried to obstruct ambulance staff from entering to help. Fu was finally transferred to a hospital. In interviews, he said he is lucky to not have suffered fatal injuries, and loves Hong Kong anyway.

Read more: Man arrested in connection with assault on journalist at HK airport

Screenshots of a man involved in a confrontation with radicals splashed with flammable liquid and set on fire in Hong Kong, November 11, 2019. /China Daily Photo

Screenshots of a man involved in a confrontation with radicals splashed with flammable liquid and set on fire in Hong Kong, November 11, 2019. /China Daily Photo

A 57-year-old man set on fire by black-clad rioters is one of the most horrifying cases of rioters using random and indiscriminate violence against innocent people since June, 2019. Because he held different political views, he was beaten up blatantly, and poured with flammable liquid overhead and set on fire by a rioter on November 11 at a footbridge in Ma on Shan in the New Territories.

The police said at a press briefing that the man remained in critical condition in hospital, suffering more than 50-percent burns in his head and upper body.

It's a very malicious case of setting someone on fire in front of many witnesses, said HKSAR Chief Executive Carrie Lam at a press conference on November 11.

"This is a blatant breach of peace and rule of law and totally inhumane act that nobody should condone," she said.

The old man, a construction worker who lives in the area with his wife and daughters, was on the way to hospital for a medical examination at the time. 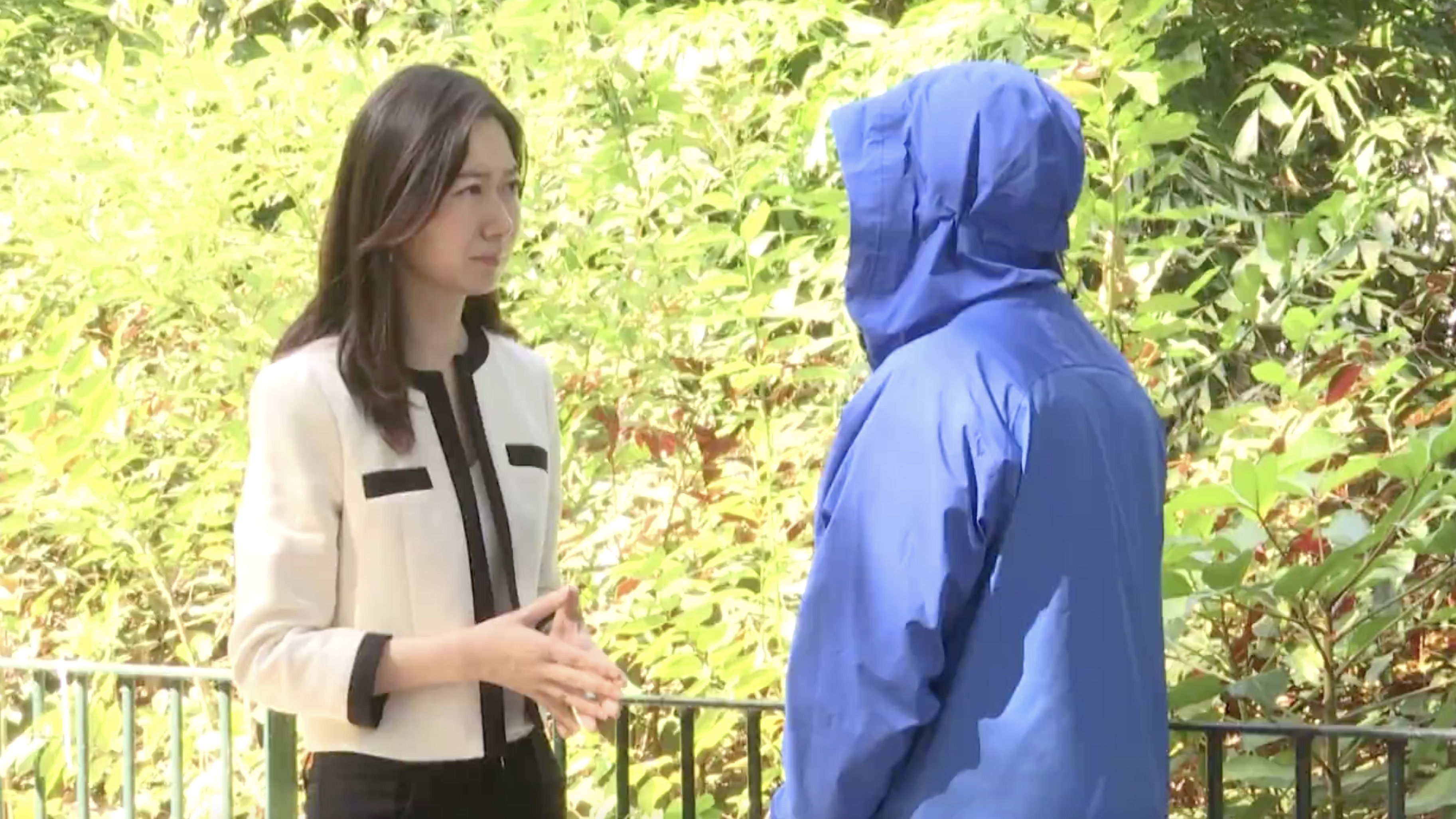 His wife told CGTN that he had the first skin graft surgery on November 15 and was still in severe condition. Here is the exclusive interview about the pain he and his whole family have endured since the attack.

On November 12, the standoff between police and protesters in the Chinese University of Hong Kong (CUHK) campus began. Hundreds of protesters armed with chainsaws threw bricks and petrol bombs, launched arrows and even fired a signal flare at police officers during the standoff.

Meanwhile, much of the Hong Kong Polytechnic University (PolyU), which had 33,000 students, faculty and staff in the most recent school year, became a deserted wasteland after undergoing acute damages during the occupation of rioters.

Burnt barricades at the entrance to the PolyU in Hong Kong, November 22, 2019. /Xinhua Photo

Burnt barricades at the entrance to the PolyU in Hong Kong, November 22, 2019. /Xinhua Photo

Trash and debris from homemade petrol bombs were strewn across the grounds and classrooms were vandalized. In the clean-up operations, police seized 3,989 bottles of petrol bombs, 1,339 pieces of explosives, 601 bottles of corrosive liquids and 573 pieces of weapons from the campus of PolyU.

On September 26, Chief Executive Carrie Lam and four secretaries of the HKSAR government attended the first "Community Dialogue" session where they had candid talks with about 150 representatives of the public selected randomly from over 20,000 people who registered for the event at Queen Elizabeth Stadium in Wan Chai. It was seen as the first step to ease escalating social tension and restore public confidence.

Carrie Lam said that she hopes to "seek change for the betterment of Hong Kong society" through continued dialogues with the public. 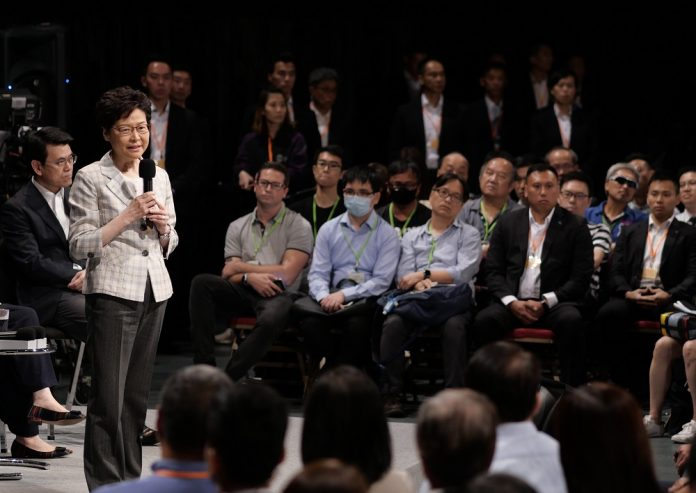 She noted that Hong Kong residents, irrespective of their status and position, felt pain, anxiety and anger in the past three months, and the HKSAR government should shoulder the major responsibility for finding a way out of the current impasse. Acknowledging the shrinking public confidence in the government and in herself, the chief executive said "direct dialogue should be initiated no matter how difficult it is".

Both protesters and opponents of the protests spoke out during the interactive section, which saw repeated mentions of housing problems, social inequality and politicizing of education, among others.

Lam promised that the issues raised in the dialogue will be studied and translated into concrete actions – into building a future together and much bolder initiatives to address deep-seated problems will be taken in the upcoming policies. 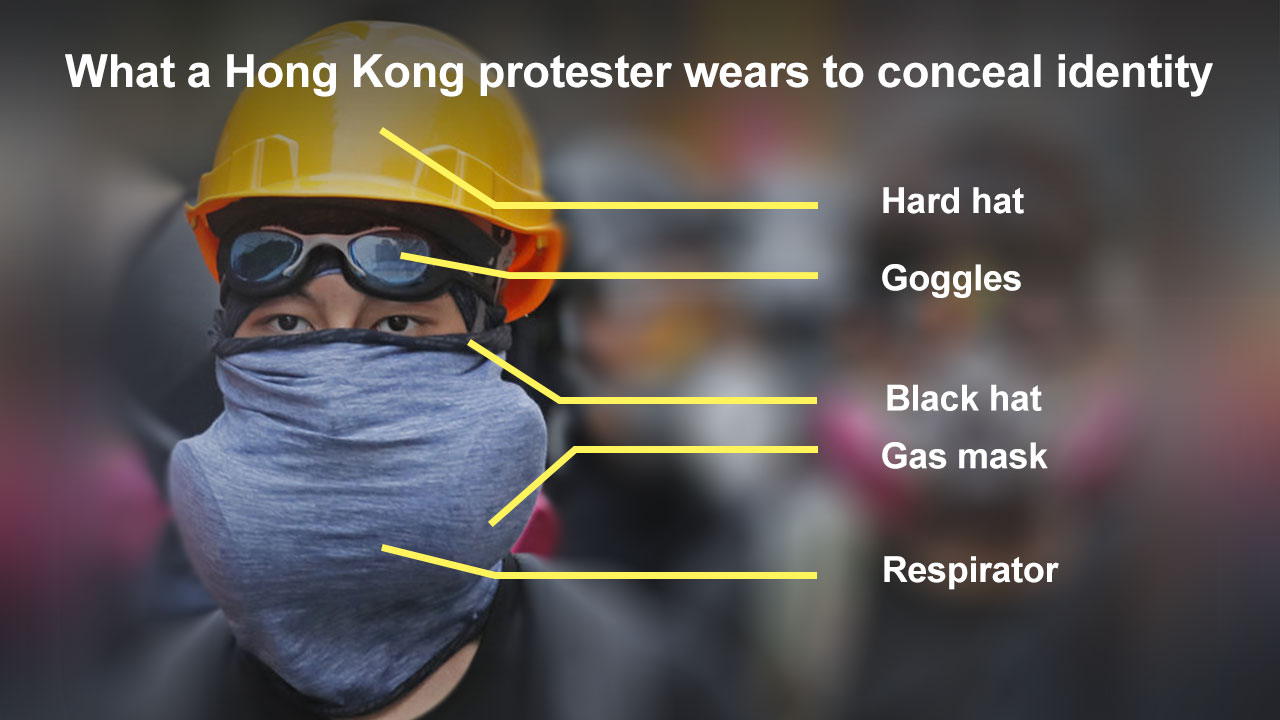 On October 4, the HKSAR government established an anti-mask law in the latest drive to quell the months-long riot.

According to Secretary for Security John Lee, the rule forbade protesters at public assemblies, authorized or not, to conceal their identity with masks and related articles. Any offender could face up to one year in jail or a fine of 25,000 Hong Kong dollars (nearly 3,200 U.S. dollars). It has set exemptions for people who have to wear a mask for special needs, such as medical, health and religious reasons, according to the government gazette.

Similar regulations are already in place in at least 15 countries, including France, Germany, Canada, Australia, and Sweden, as well as dozens of states in the United States. For example, the mask law was cited in New York City during the Occupy Wall Street movement in 2011 and 2012 and during the Yellow Vest protests in France in 2019.

Why are HK residents and police calling for anti-mask laws?

Meanwhile, the road map calls for Hong Kong to play its role as an international financial, transportation and trade pivot. The city would focus on offshore yuan, international asset management and risk management, as well as developing innovation and technology industries.

In 2019, the central government launched 16 policy measures to benefit people of Hong Kong and Macao in life, work, study and businesses across the GBA and facilitate the ease of flow for people, goods and capital within it.

In addition, the Ministry of Human Resources and Social Security and the National Healthcare Security Administration also announced that Hong Kong, Macao and Taiwan residents who work, study or live on the Chinese mainland will be eligible for national social insurance from January 2020. 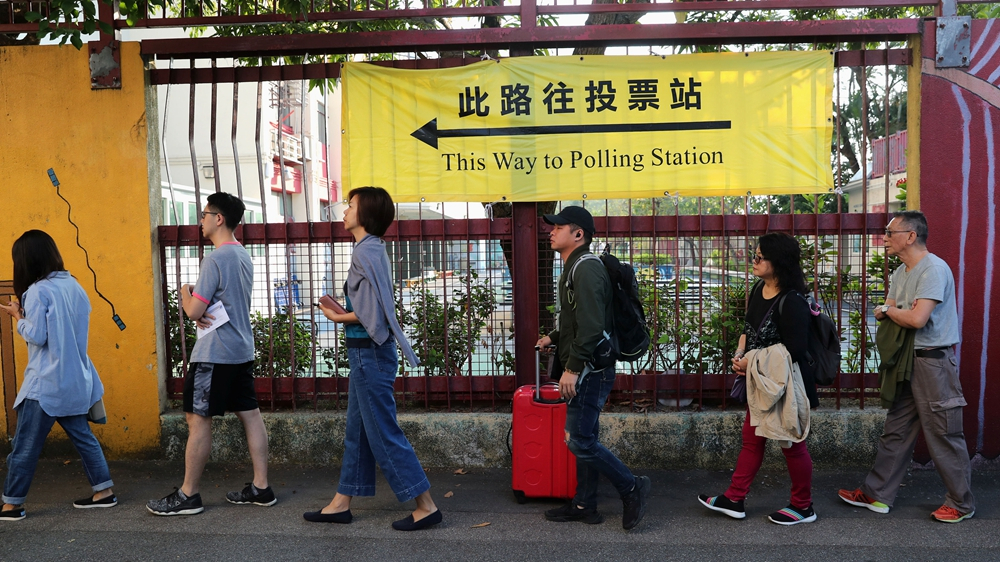 Polling stations for the 2019 District Council Ordinary Election of the HKSAR closed with a record high in voter turnout.

A total of 615 ordinary polling stations and 23 dedicated polling stations were open for the 2019 District Council Ordinary Election, which concluded with an overall voter turnout rate of 71.2 percent, with more than 2.94 million registered voters casting their ballots at the polls, according to Barnabas Fung, chairman of the Electoral Affairs Commission of the HKSAR.

Serving as a tie between the public and the government, the district councils are consultative bodies, typically concerned with local issues like bus routes and community facilities.

The 452 elected district council members, together with 27 ex-officio members who are committee chairmen in the New Territories, compose the sixth-term district council for a year from January 1, 2020. 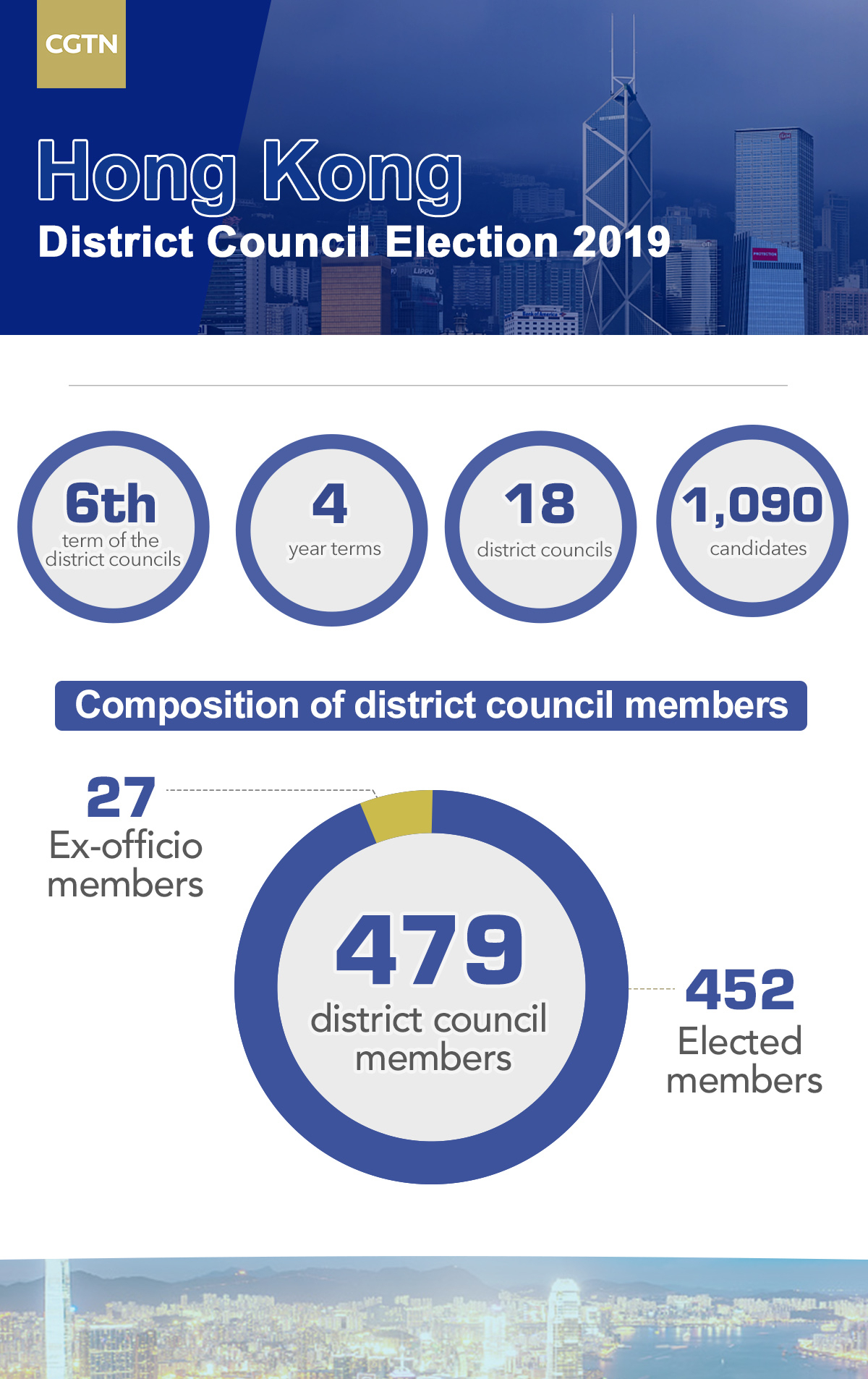 The district council election, held every four years, is the first poll held in the HKSAR after the now-withdrawn amendments concerning a fugitive bill sparked unrest in June.