Geopolitics of epidemic: Is U.S. using 2019-nCoV to impose 'sanctions' against China?
By Abhishek G Bhaya 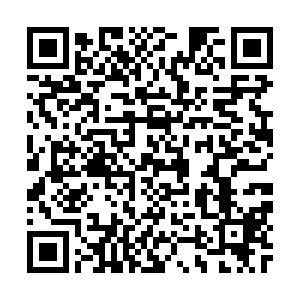 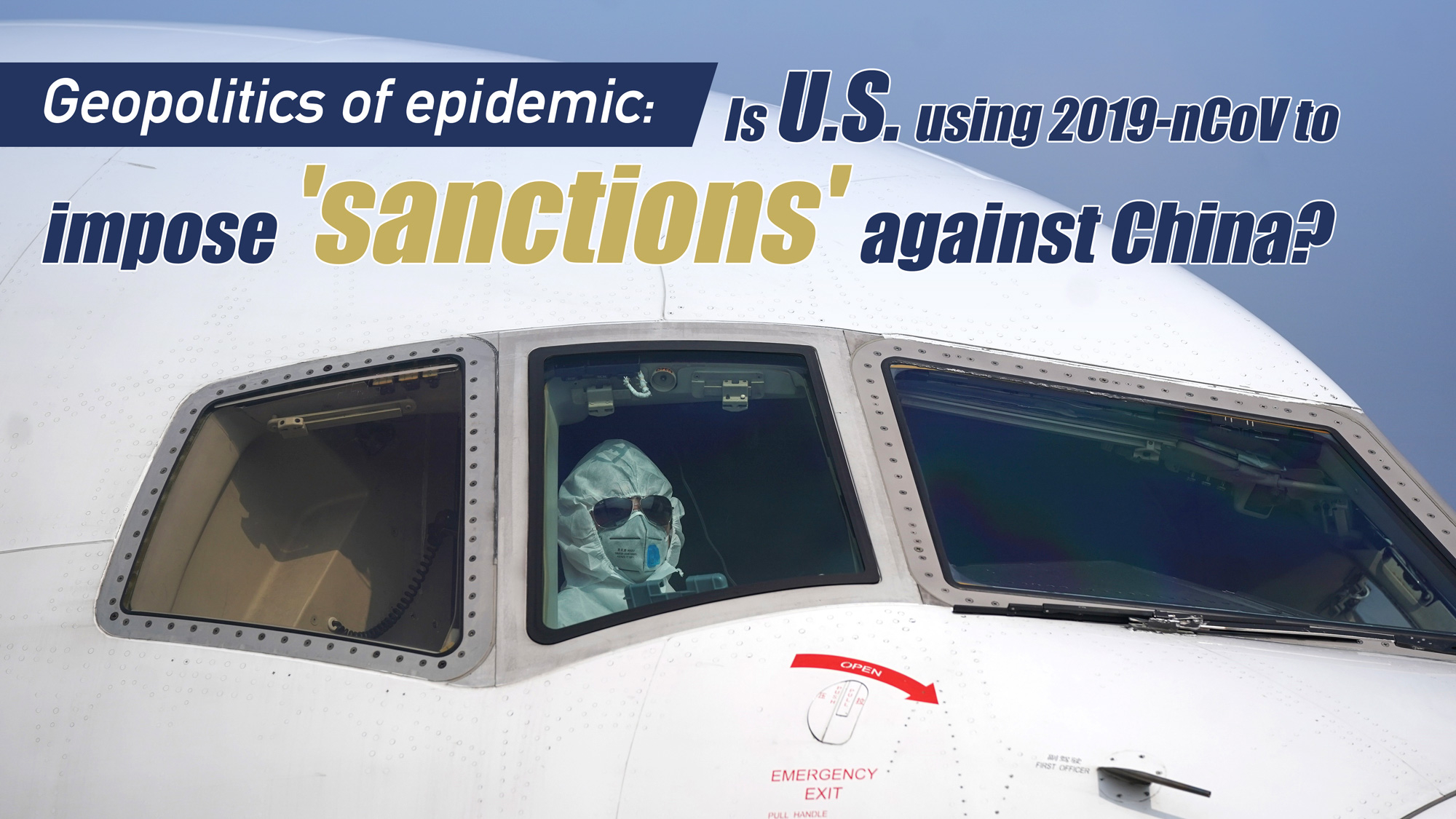 Is the U.S. exploiting the coronavirus outbreak to subtly put in place a sanctions-like regime against China? The promptness with which the U.S. has gone about imposing extensive travel restrictions in the aftermath of the outbreak – despite the World Health Organization's (WHO) advice to the contrary – has triggered global panic and identical response by a host of countries, deepening China's isolation.

Meanwhile, the U.S. Secretary of Commerce Wilbur Ross gleefully rejoiced at the prospect of global companies leaving China that "could bring jobs back to the U.S." – isn't that a key strategic objective of President Donald Trump's trade war against Beijing? – indicating clearly that Washington's decisions are more geopolitical than a reasonable preventive response to an epidemic.

A glance at Trump's older tweets makes it clear that it has been the U.S. President's dream to hurt Beijing economically by pulling out American companies from manufacturing in China. Analysts feel that the U.S. would not hesitate to exploit China's vulnerability in the wake of the coronavirus outbreak.

Beijing has protested against the U.S. travel advisory saying, "It is certainly not a gesture of goodwill." While Chinese Ambassador to the U.S. Cui Tiankai, in response to Ross' comments, warned against a "political virus" that could create a hurdle between the two countries from working together, Chinese experts have also insisted that the coronavirus is a health issue and not a political game.

The WHO has declared the novel coronavirus, designated 2019-nCoV, a global health emergency, but at the same time, the UN body's emergency committee found no reason for countries to impose travel or trade restrictions against China.

"The committee does not recommend any travel or trade restriction based on the current information available," the emergency committee said in a statement published after it met last Thursday. "Countries are cautioned against actions that promote stigma or discrimination, in line with the principles of Article 3 of the International Health Regulations (IHR)," the statement added.

However, this did not stop the U.S. from declaring a public health emergency and announcing a Level-4 travel advisory – the most severe alert by the State Department that applies only to areas with a "greater likelihood of life-threatening risks" – putting China on par with Afghanistan, Iraq, Libya, Syria, Mali and the DPRK. 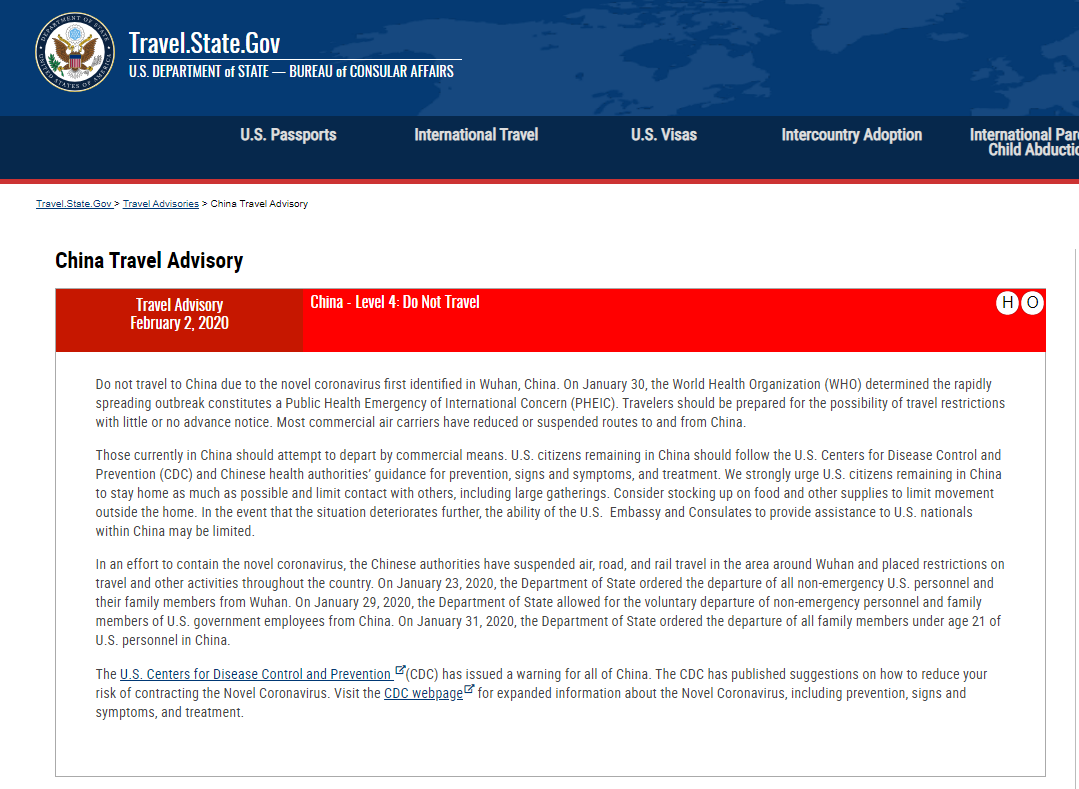 A screenshot of the China Travel Advisory issued by the U.S. State Department. /CGTN Photo

A screenshot of the China Travel Advisory issued by the U.S. State Department. /CGTN Photo

The U.S. has temporarily banned the entry of foreign nationals who had traveled to China over the past two weeks. Major restrictions were also placed on U.S. nationals, with mandatory 14-day quarantines for those returning from central China's Hubei Province, the epicenter of the outbreak.

Washington was also the first to issue a travel advisory barring citizens from visiting China. Earlier last week, American carrier United Airlines became the first international airline to suspend its flights to China – on the same day Chinese authorities were facilitating the U.S. to evacuate 195 American citizens from Wuhan.

Also on Friday, the U.S. State Department ordered embassy employees to send home family members under the age of 21. A day later, Washington's strongest ally Britain announced it was temporarily withdrawing some diplomatic staff and their families from China.

WHO: Travel restrictions will cause more harm

Amid international panic, WHO Director-General Tedros Adhanom Ghebreyesus on Saturday attempted to dissuade such moves while asserting in a tweet that "travel restrictions can cause more harm than good." Ghebreyesus went on to express confidence in China's efforts to contain the crisis. 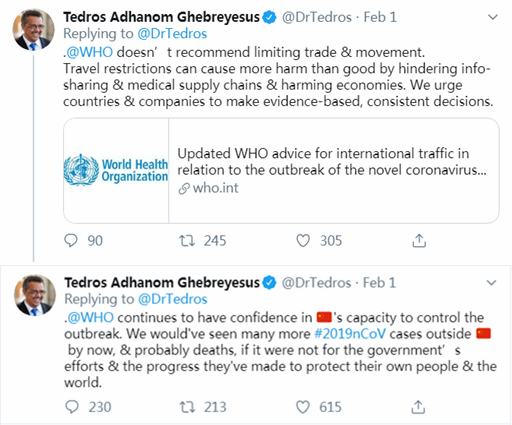 Screenshot of tweets from WHO Director-General Tedros Adhanom Ghebreyesus dissuading travel restrictions and expressing confidence in China's efforts to contain the epidemic.

Screenshot of tweets from WHO Director-General Tedros Adhanom Ghebreyesus dissuading travel restrictions and expressing confidence in China's efforts to contain the epidemic.

Many observers see the U.S.-led restrictions as a deliberate move to not only isolate but hurt China.

"Why the anti-China sentiment is being built up around the world due to the novel coronavirus?" questioned Qingdao-based Australian professional David Le Blanc. "Seems to me the U.S. is using this as a political tool to get support against China."

"All this, when the U.S. was itself at the center of H1N1 pandemic, and even less was done to stop the outbreak which killed hundreds of thousands globally. The numbers and facts are clear," he said.

"When people's lives are in the balance, the U.S. is pushing the world to turn on China with scare and exaggeration. Very sad world we are in now, led by the wrong people," he added, criticizing Washington's decisions.

H1N1, which broke out in the U.S., remains a bigger threat

To put things in perspective, consider how the world reacted to the H1N1 influenza virus, also known as swine flu, that first broke out in the U.S. in April 2009. The WHO announced a global health emergency by late April but advised against travel restrictions just like it has done for the coronavirus epidemic. 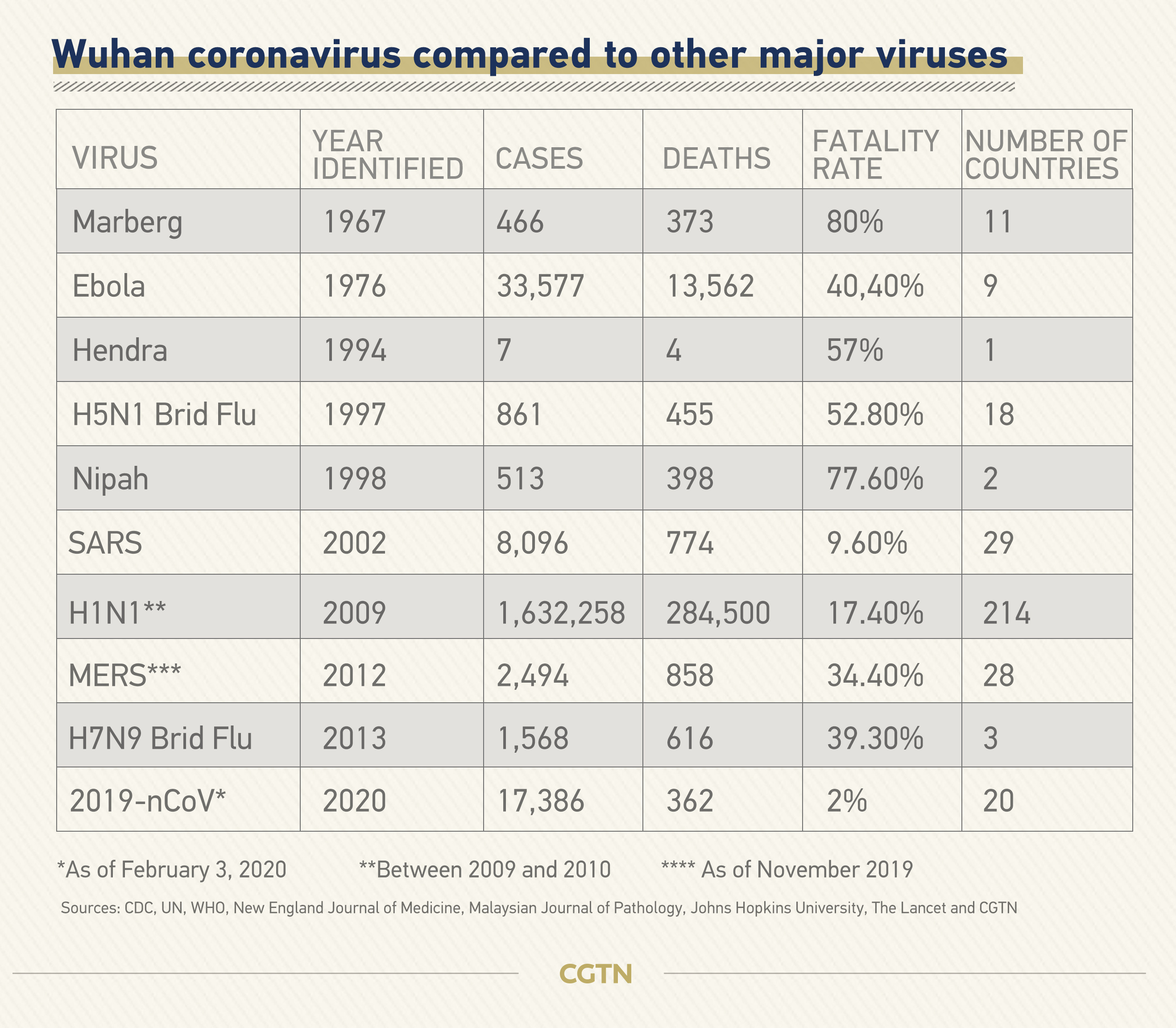 According to the U.S. Centers for Disease Control and Prevention, 60.8 million Americans contracted the virus in the first year of the epidemic, resulting in 274,304 hospitalizations, of which 12,469 reportedly died in the U.S. alone. The virus spread to over 200 countries and regions and killed about 284,500 people worldwide between 2009 and 2010.

In comparison, in just a little over a month from the coronavirus outbreak on December 31, there have been 17,238 confirmed cases in China, of which 361 have succumbed to the infection while over 480 patients have recovered as of February 3. In addition, 148 cases have been confirmed in 20 countries, and so far, only one death has been reported abroad in the Philippines. 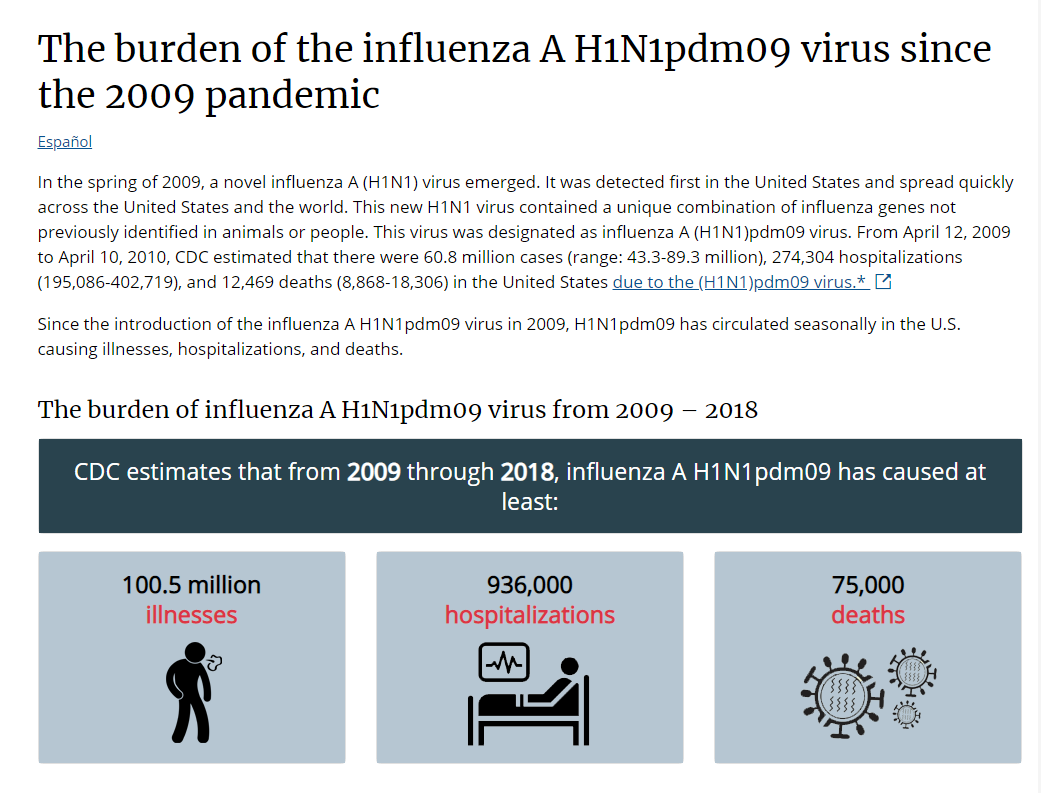 A screenshot from the U.S. Centers for Disease Control's official website showing the impact of the H1N1 virus from 2009 to 2018 in the U.S. /CGTN Photo

A screenshot from the U.S. Centers for Disease Control's official website showing the impact of the H1N1 virus from 2009 to 2018 in the U.S. /CGTN Photo

But can anyone remember countries flocking together to impose collective travel restrictions against the U.S. following the H1N1 outbreak in 2009? Yes, there were a few travel advisories against visiting Mexico, another country affected by swine flu, and some flights to the U.S. were suspended, but nothing in the scale witnessed currently.

On the contrary, the WHO issued a strong statement emphasizing why there's "no rationale for travel restrictions," and scientists carried out computer simulations to argue why restriction will do more harm than good.

By August 2010, the WHO announced that H1N1 has moved into the post-pandemic period, and the CDC downgraded it further to "a regular human flu virus," which "continues to circulate seasonally worldwide," despite the swine flu's alarming mortality rate. According to the CDC's own data, the H1N1 virus caused 75,000 deaths between 2009 and 2018 just in the U.S. alone, meaning over 8,000 deaths annually. 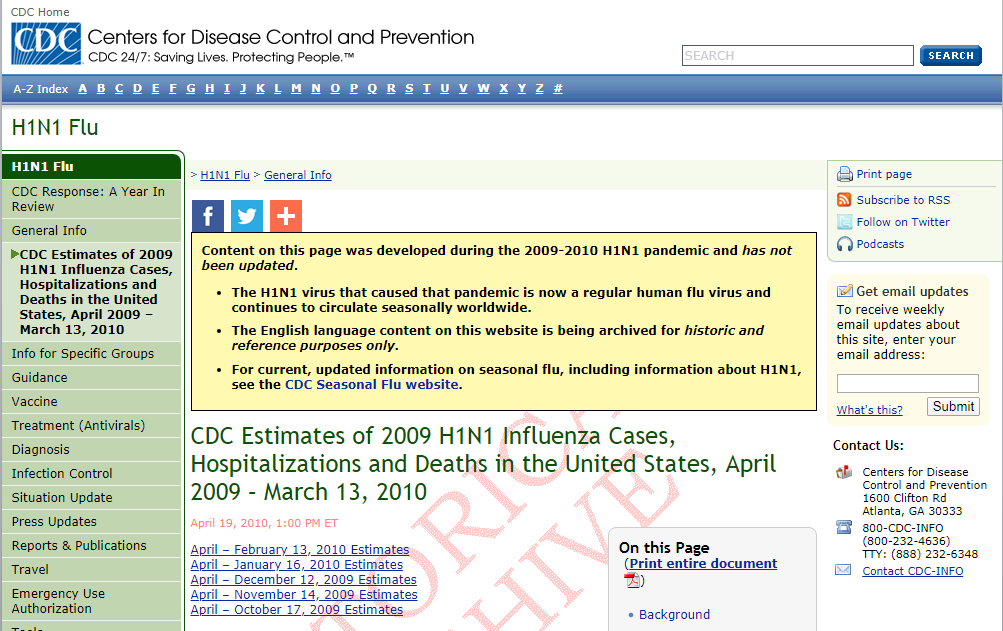 A screenshot from the U.S. Centers for Disease Control's official website that displays a notice about the H1N1 virus being downgraded from a pandemic to a regular human flu virus. /CGTN Photo

A screenshot from the U.S. Centers for Disease Control's official website that displays a notice about the H1N1 virus being downgraded from a pandemic to a regular human flu virus. /CGTN Photo

Let's face it. The 2019-nCoV is neither the deadliest nor the most contagious epidemic the world has seen in recent history.

While the coronavirus continues to be a mysterious virus at the moment, the common flu still remains a bigger threat and more fatal in many places in the world, including the U.S. and Europe.

More than 10,000 people in the U.S. have died from the flu this season, which peaks between December and February, according to CDC estimates. There were 19 million cases of flu illnesses during the same period.

Influenza reportedly kills some 40,000 Europeans annually, with Germany alone reporting approximately 25,000 influenza-related deaths in 2017-18, according to a report by Berlin-headquartered Robert Koch Institute.

"Is the coronavirus over-sensationalized? How likely are we to die from it?" Shanghai-based entrepreneurial coach and documentary producer Fionn Wright asked, noting that "you are much more likely to die from cardiovascular disease (8,000 X), cancer (4,000 X), respiratory disease (2,000 X) and car accidents (1,000 times)."

Wright also noted that the median age of those who died due to coronavirus is 70-plus, with many having an existing illness, which makes the virus comparatively less fatal.

Considering the relatively low mortality rate of 2019-nCoV and comparing it with the H1N1 outbreak make it crystal clear that the U.S. response to the current epidemic is not only disproportionate but also misplaced and politically motivated.