Here's how coronavirus battle is paving the way for a much stronger China 2.0
Abhishek G Bhaya 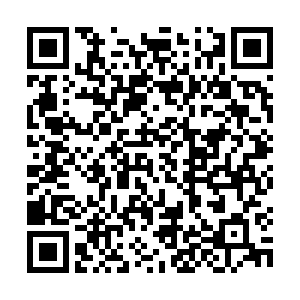 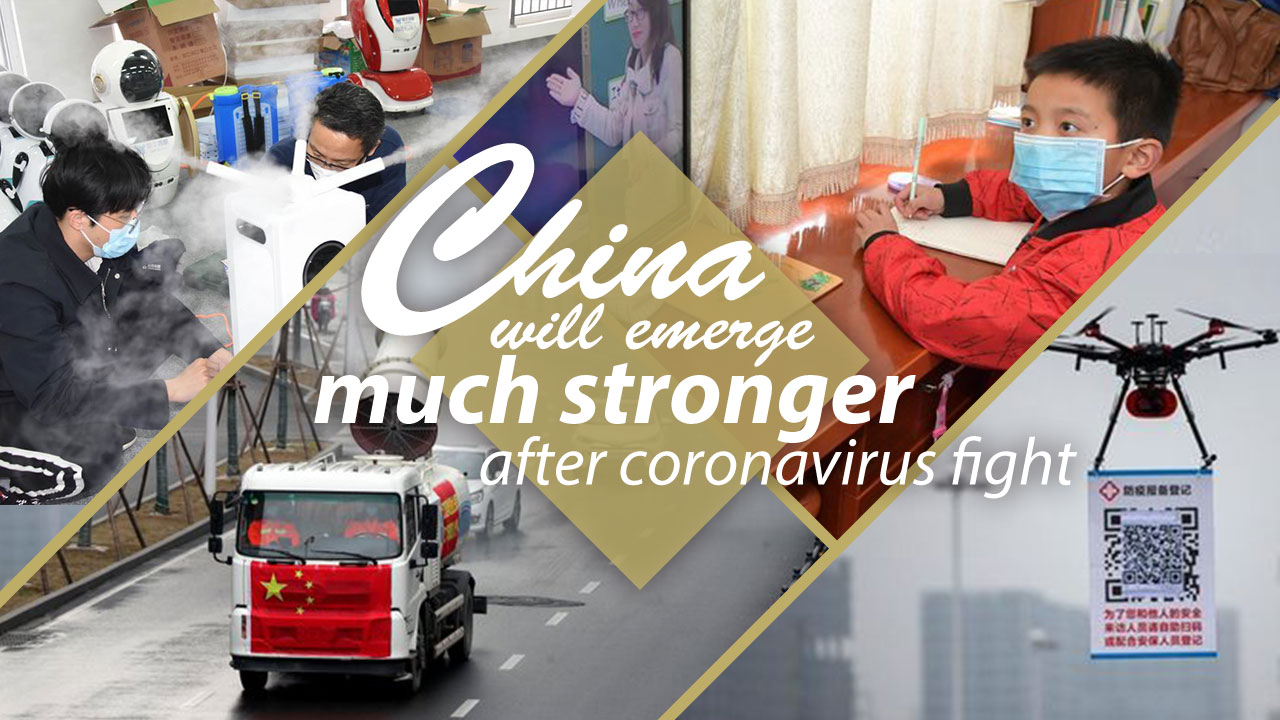 The novel coronavirus outbreak has radically changed the daily lives of people in China over the past few weeks. Many have gotten bored of confinement after being compelled to work from home or even tired of the stringent sanitation and disinfection practices implemented across the country.

However, if one is to believe Fionn Wright, an avid China watcher, these changes that people are experiencing in their private lives along with the larger prevention and control measures put in place by the government will ensure China's rise as a much stronger nation after the epidemic, now officially known as COVID-19, is curbed.

"There's a concept in China – 塞翁失马，焉知非福 (sai weng shi ma, yan zhi fei fu) – and essentially it means that something that might look bad [in first sight] may actually turn out to be a good thing. And that's what I'm seeing with this coronavirus outbreak," Wright, a Shanghai-based Irish expat who divides his time between China and Canada, told CGTN Digital in a Skype interview from Vancouver.

"Right now, it seems like it could only be negative and it is a tragedy – the economy is hit hard, there are people suffering – but it might actually turn out to be positive; to be beneficial for the country in the long run," he added. 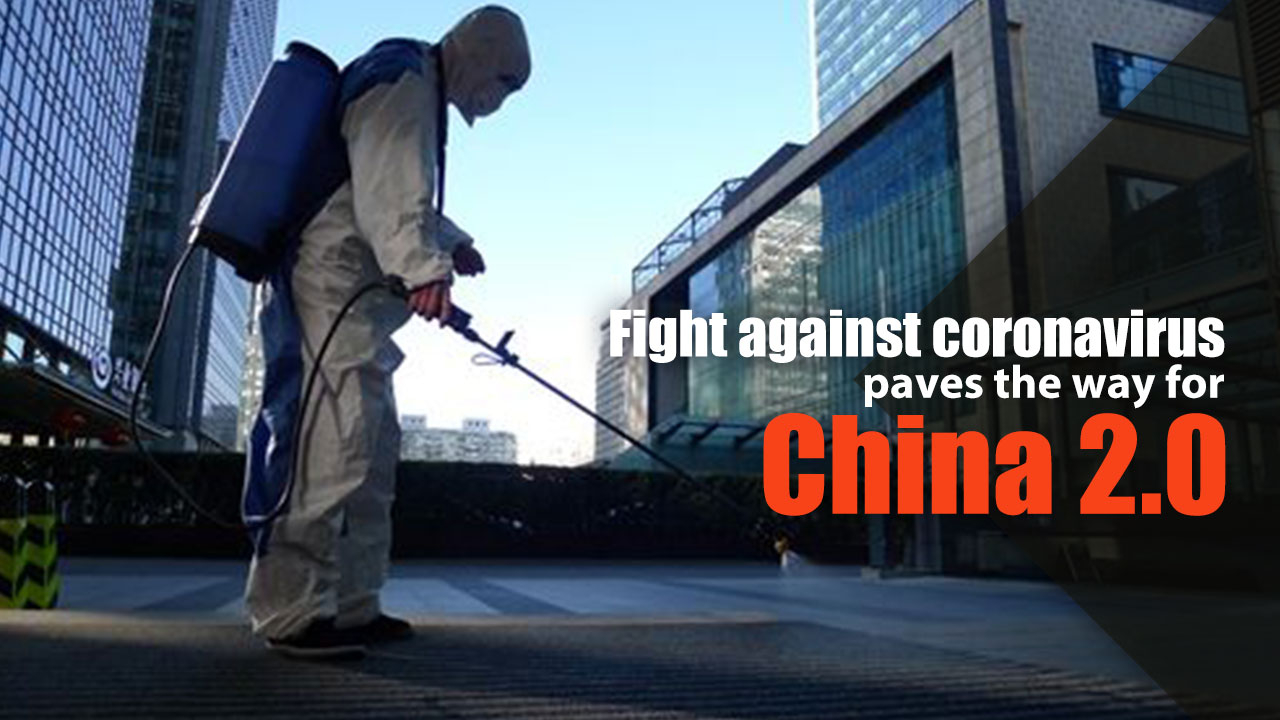 Wright cited 10 trends – broadly categorized under the three fields of internet ecosystem, social shifts and government interventions – that are consolidating during the present crisis and could pave the way for, what he described as, a much more resilient "China 2.0" in the future.

"China 2.0 is the idea that China is moving towards something new. Now it's accelerating because of this coronavirus. It's had a bit of a dip now, a bit of a hit to the economy, but it's going to start accelerating now towards what I'm calling China 2.0," he said, explaining that the foundation for China 2.0 lies in realizing Chinese President Xi Jinping's vision of Community of Common Destiny.

"The way I prefer to translate it (Xi's vision) is thinking about it in terms of a species that is coming together and working towards a common vision of creating a harmonious world. … So, China 2.0 is also about World 2.0," he elaborated. 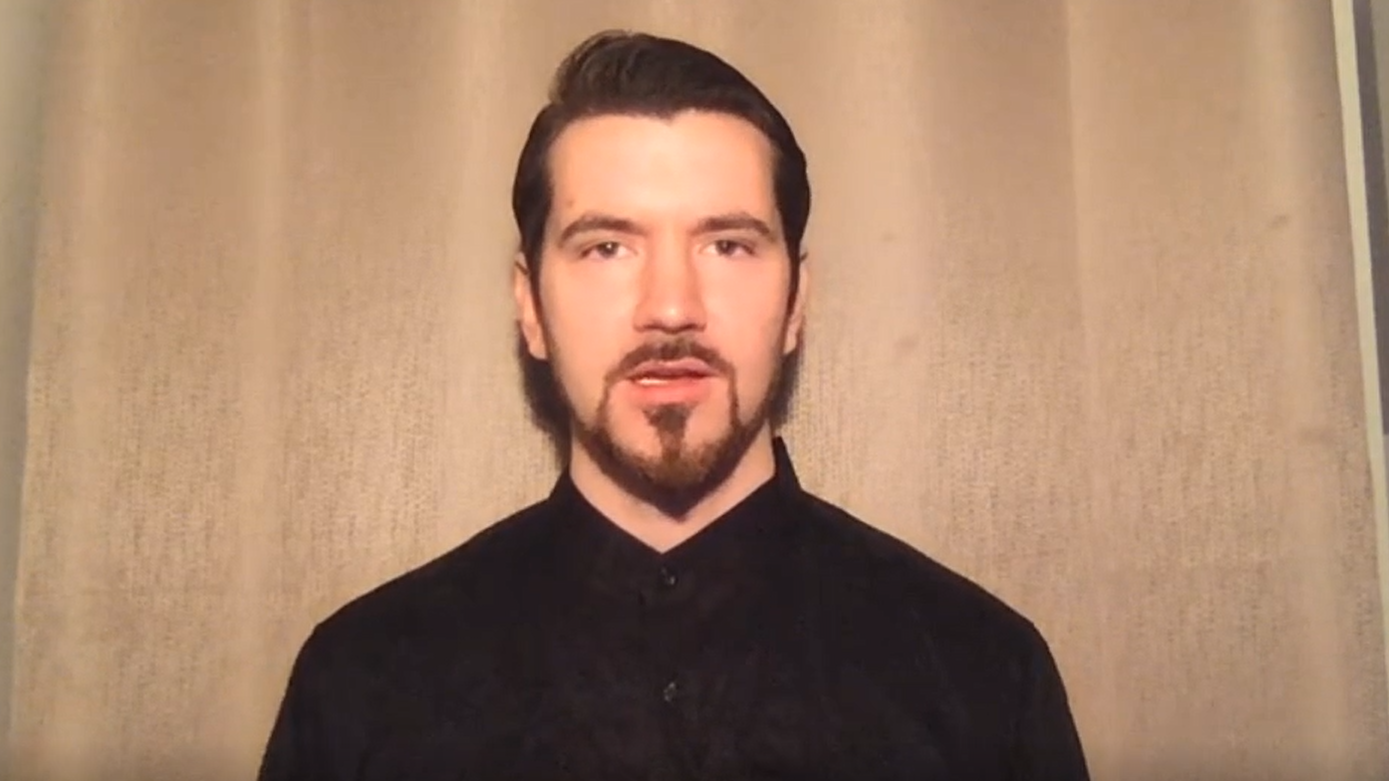 Here's a low-down on the 10 trends amid the battle against COVID-19 that indicate the advent of China 2.0.

Wright noted that the current situation is allowing online shopping, which is certainly not a new concept in China, to spread in areas where it didn't have much foothold earlier, such as in the case of groceries. "During this outbreak, people had to stay at home. They couldn't go out. So, what happened was they started to buy the groceries online. So now it's become normal," he remarked.

In the future, offline stores will become less about selling things and more about creating experiences, Wright insisted. "We will still have physical stores, but people will visit to have these experiences. Instead of going to the till and buying something, they will scan a QR code and the item will be delivered to their house. So, we're going to see experiential stores tying in with new retail; how the whole internet ecosystem ties to the offline."

With the Chinese New Year holidays extended for an indefinite period post the outbreak, schools and universities have resorted to online education at a large scale. Wright predicted that this will lead to "entirely new models of online education and learning" that could cater to a diverse group of students.

"So, you could have thousands of people attending a lecture by the best professor in China in a given subject; and at the same time, you could also see individual students or smaller groups of 6-10 students getting a tutor online," he said.

3. Working from home will be the norm

Wright asserted that the current situation will make organizations and individuals more receptive to remote working in the virtual sphere. "At first it's always a bit strange, but now we have actually been pushed into this situation where you have to stay at home, but we still have to get our work done," he said.

"So, it's going to create over the next few months and years entirely new models of online collaboration – collaboration in the form of applications; in the form of how you set up an online office etc. Can you have an online receptionist? How do you organize things online? How do we manage projects online? These are all going to become much more sophisticated and innovative," he elucidated.

4. Health conscious society based on biotech

The transformation towards an increasingly health conscious society will be one of the major social shifts that China is expected to witness in the coming years, and biotech will play a key role in that direction, according to Wright.

"Food safety in China has already been a big question, but it's now going to be an even bigger priority. People are going to make sure they're eating safe food. And we're also going to see some of the bio-technologies are really going to expand. We're going to see entirely new ways of integrating medicine with society," he said.

China already has more smart cities than the rest of the world combined. The novel coronavirus has seen authorities in various Chinese cities employing some of the latest smart AI technologies, including drones, infrared cameras and robots, in prevention and control measures. Wright maintained that these efforts will expedite the process of integration between the smart cities in ways that "have never been seen in the history of humanity."

"We've seen drones flying around different cities in China, recommending people, you know, to make sure that they're wearing their masks, reminding them to be safe, reminding them not to spend too much time outdoors. We've also seen these infrared cameras that can detect in the crowd which person might have a fever. ... And we've already seen those maps across China where you can monitor who's sick where and ensure that you're in a safe environment."

China has a formidable track record when it comes to the pace of development – creating infrastructures, highways, railway networks, hospitals and other facilities in record time. The unprecedented manner in which the system has responded to the current crisis shows a new level of "China-speed."

"One of the things that's happened during this coronavirus outbreak is we've had the government working with companies, working with the average person to make sure that everyone's working together to deal with the challenge. So, we're going to see China's speed also in terms of strategic coordination, strategic resource allocation across different tiers, different layers of society to where the resources need to go," he remarked. 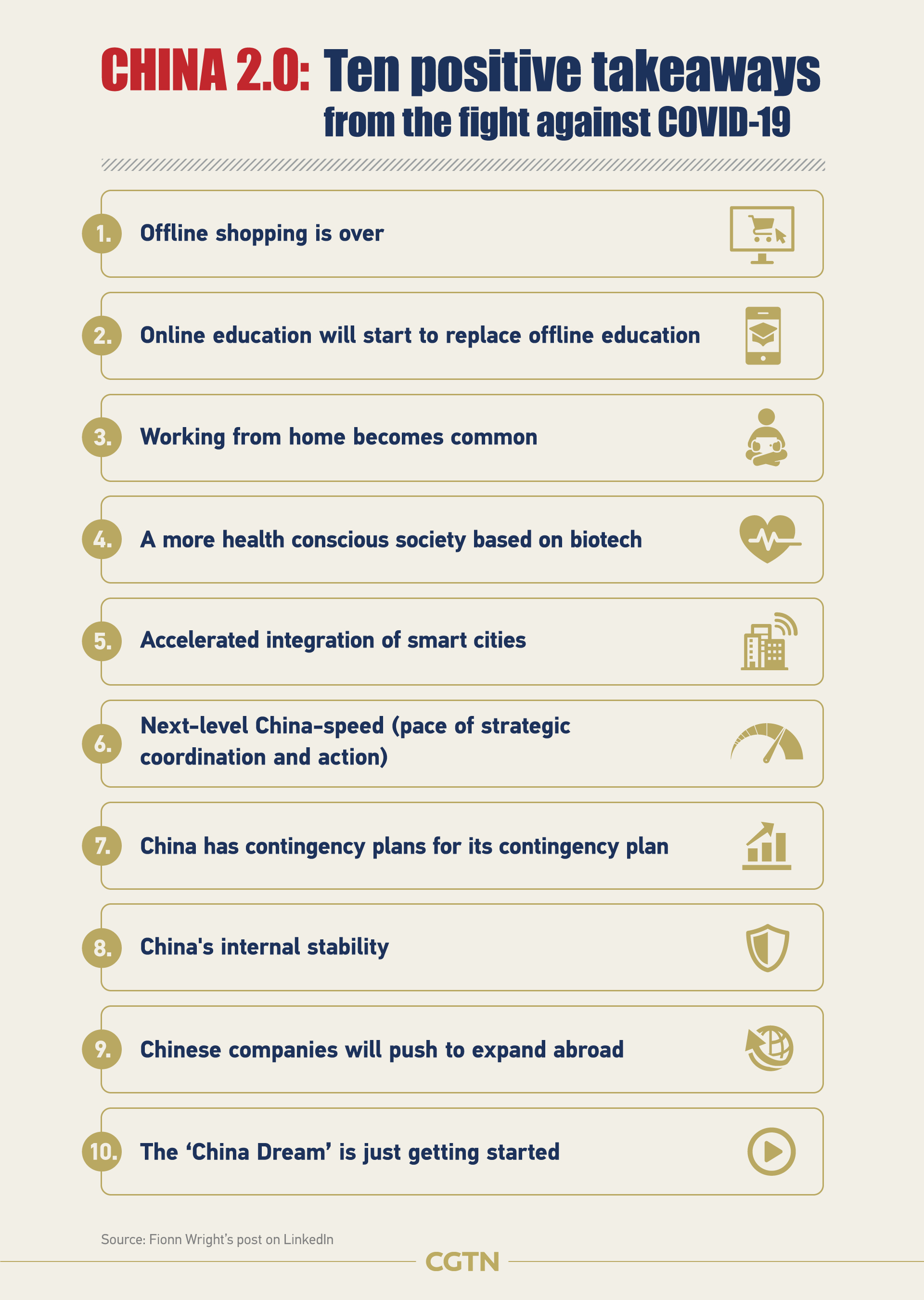 The remarkable alacrity displayed in government intervention to overcome one of the biggest crises faced by China in recent decades has come for a lot of praise globally. The measures taken over the past weeks have shown that government is constantly working on multiple plans.

"We've known for quite a while that the Chinese government thinks many steps ahead and they've always tried to figure out what's the best way of doing things. They have contingency plans. But what we're going to start seeing now is they're going to have contingency plans for their contingency plans," Wright suggested, adding, "We're really going to see how they can map out all the different scenarios and see what's the best way of responding and creating structures, creating systems to be able to respond in the most effective way."

One of the key policy priorities for China is to maintain internal stability and sustainability. The coronavirus crisis will consolidate but also redefine the concept of stability for the entire population.

"Before the outbreak happened, China's internal stability had a lot to do with stable employment ... and with real estate, making sure that people are buying homes and not just buying properties for investment. Now after the outbreak, we're going to see that this internal stability has to do with the feeling in the country, this feeling of unity, this feeling of people coming together and working towards a common goal," Wright reasoned.

Amid reports of several firms halting or reducing productions across the country in the wake of the outbreak, Wright predicted a greater push by Chinese firms for overseas expansion in the future "to diversify their markets the same way a wise investor diversifies his portfolio to dampen the effect of a crisis."

"This is really just a smart strategy. Right now, everything in China is shut down. If your company only operates in China, you haven't been able to do much. But if you're expanded across the world, then it doesn't really matter as much. You can still continue your operations around the world," he said.

10. The 'China Dream' is just getting started

Wright, a personal coach for entrepreneurs and executives who promises to fulfill your "China Dream" according to his LinkedIn profile, is convinced that the current crisis will only see the entire nation rebounding with full vigor to achieve that dream.

"The Chinese government has been pushing towards the vision of creating a moderately prosperous nation by 2020. In my estimation, they've already done that but they're going to push till the end of 2020 to make sure that they've hit all the goals of 'China Dream' that they wanted to hit," he said.