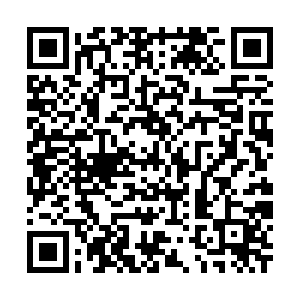 Since Iran announced its first patient of COVID-19 two weeks ago, the number of both fatality and confirmed cases in this country has been surging. Iran has so far reported 3,513 cases of COVID-19 and 107 deaths as of Thursday. It has temporarily shut schools, universities and other educational institutions, and cancelled all public events.

But the political vortex around Iran never stops. On Thursday Tehran again denied U.N. nuclear inspectors access to sites where they have claimed finding of uranium traces, arguing that the agency's case is based on "fabricated" Israeli intelligence.

It appears the same case with Iraq. On Thursday, three Katyusha rockets were fired towards the heavily fortified Green Zone, which houses the U.S. embassy and other missions, in the Iraqi capital, police sources said. The Green Zone, which also houses government buildings, has been repeatedly hit by rockets for months.

Meanwhile, Iraq's health ministry has announced its first two confirmed deaths related to the new coronavirus disease, according to the BBC, but the source has not been confirmed by the Iraqi government. Iraq has so far reported 38 cases of COVID-19, most of them linked to neighboring Iran. 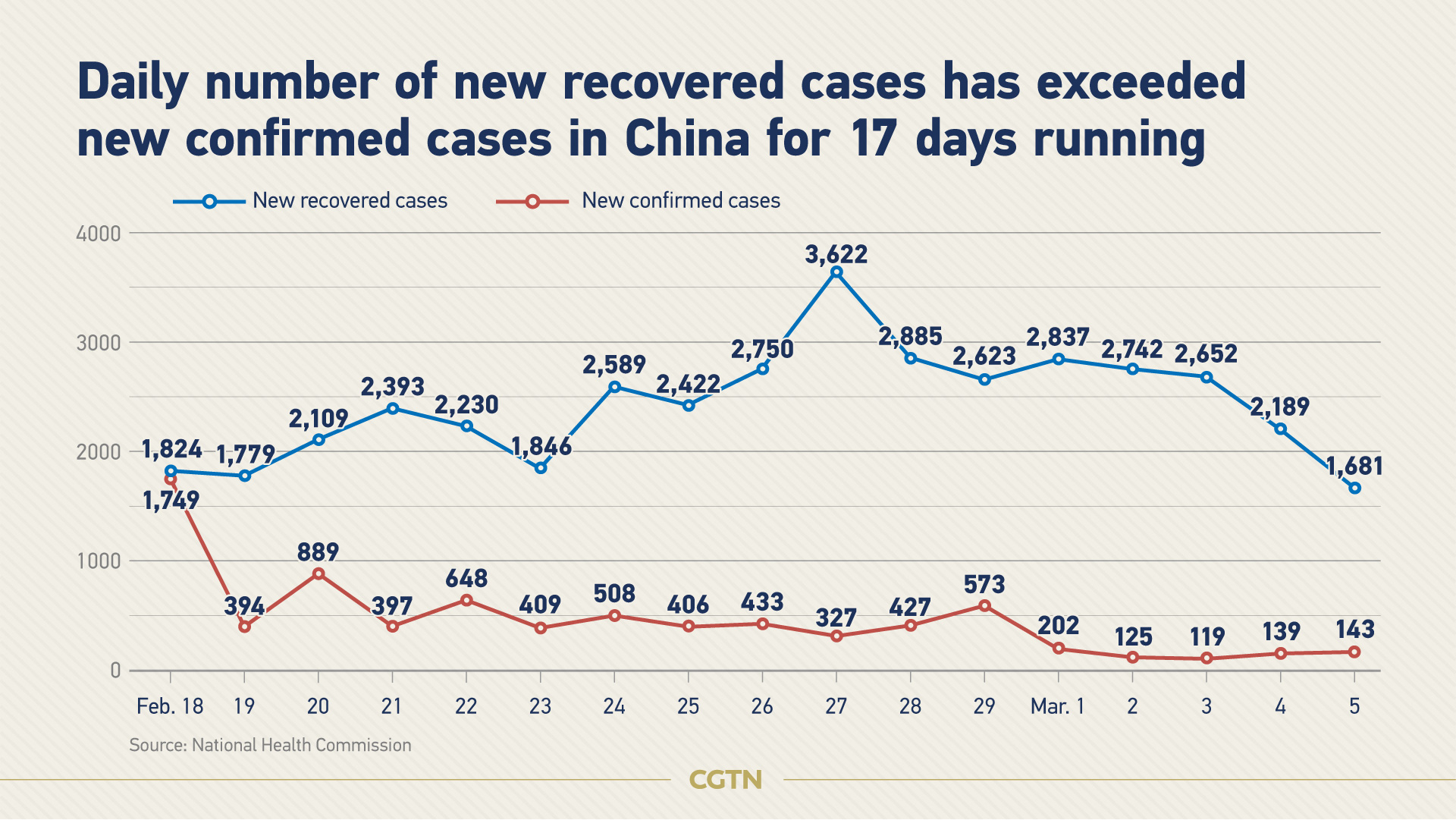 On Thursday, another prominent figure tested positive for novel coronavirus in Iran, the country's Vice President for Women and Family Affairs Masoumeh Ebtekar, according to Iranian media. In addition, the head of the national security and policy committee of the Iranian parliament, Mojtaba Zolnour, also announced on Thursday that he too had contracted the virus.

Zolnour is from Qom, one of Shia Islam's two holiest cities and the epicenter of the virus in Iran. Earlier this week, another parliamentarian from Qom, Ahmad Amirabadi Farahani, tested positive for coronavirus.

The virus seems to be spreading quickly among Iran's elite. On Thursday alone, the country reported five more prominent members testing positive for coronavirus. This comes after two senior Iranian officials have already died from the virus and several more are infected. According to the semiofficial ILNA news agency, the head of Iran's emergency medical services, Pirhossein Kolivand, has been infected as well. Just the day before, he gave a press conference, claiming Iran had the coronavirus under control.

Iran is now the main center of contamination and exporter of the coronavirus outside China. The U.S. president Trump's continuation of the isolation policy as Iran grapples with the coronavirus epidemic crisis may possibly backfire not only the U.S. but the rest of the world.

China on Thursday called for the immediate lifting of the sanctions against Iran given the severe outbreak of the COVID-19 epidemic. The ongoing sanctions from Washington have made Tehran more skittish about taking any public health measure, such as reducing contacts with trading partners or declaring a public health emergency, that could further damage its already ailing economy. 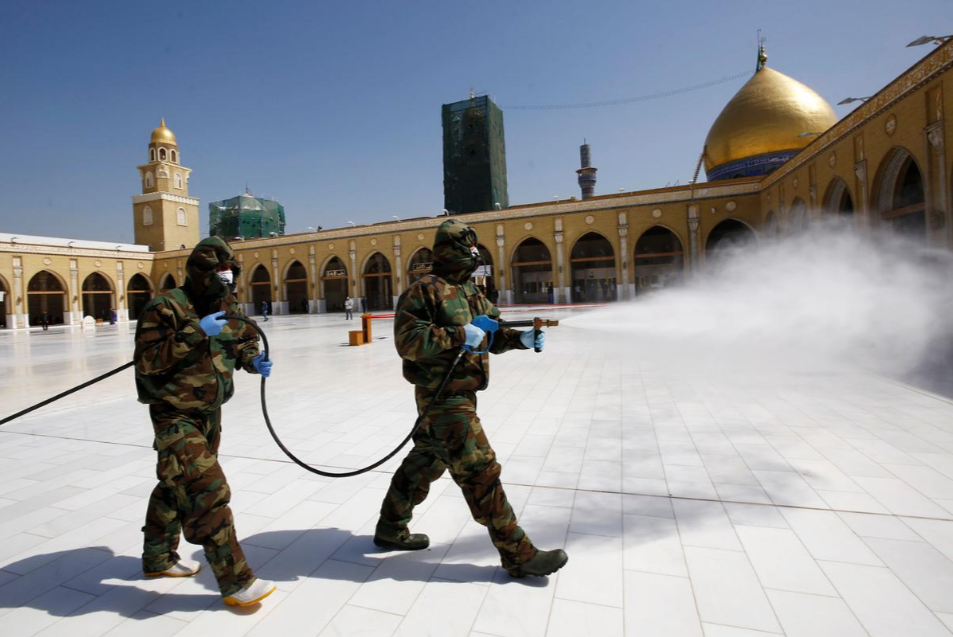 Members of the civil defense team spray disinfectant to sanitize surrounding of the Kufa mosque, following an outbreak of the coronavirus, in the holy city of Najaf, Iraq, February 27, 2020. /Reuters

Members of the civil defense team spray disinfectant to sanitize surrounding of the Kufa mosque, following an outbreak of the coronavirus, in the holy city of Najaf, Iraq, February 27, 2020. /Reuters

Iraq's health ministry has announced its first two confirmed deaths related to the new coronavirus disease, according to the BBC, but the source has not been confirmed by the Iraqi government. Iraq has so far reported 38 cases of COVID-19, most of them linked to neighboring Iran.

Iraq, one of the first countries closed its border with Iran, has effectively contained the spread of the virus. But the spillover effect caused by the disease is still severe economically.

"Business has stopped. We haven't had one single visitor since around six months, maybe some five Iraqis came but no foreigner," a hotel owner in Najaf, one of the hottest destinations for pilgrims in Iraq, told Reuters. "Unemployment has jumped (in Najaf)."

More than ten million arrived annually alone in Najaf, half of them Iranians. With the coronavirus spreading, authorities have banned foreign pilgrims, paralyzing an industry already crippled by anti-government protests. In total about 4,000 people working in the hospitality sector have lost their jobs in Najaf alone, said Saib Radhi Abu Ghanem, head of the local hotel and restaurant association.

Tourism is a key industry not just in Najaf but also in Kerbela, Baghdad and Samarra, home to other Shia places of worshiping. More unemployment could fuel the protests, which are driven by complaints by many Iraqis about corruption, mismanagement and the lack of basic services despite Iraq's oil wealth.

The crisis is worsened by a domestic political void in Iraq that leaves the seat of the country's top leader vacant for over three months. Caretaker Prime Minister Adel Abdul Mahdi, who quit in November over a deadly protest, walked away from his duty again on Monday, a day after his designated successor, Mohammed Allawi withdrew his candidacy after heavily divided lawmakers failed to approve a Cabinet of his designated successor.

Iraq entered a prolonged anti-government protest since October in 2019, causing about 500 casualties, with tens of thousands more injured, according to Iraq's Independent High Commission for Human Rights.

Iraq protests U.S. airstrikes on militia groups in its territory 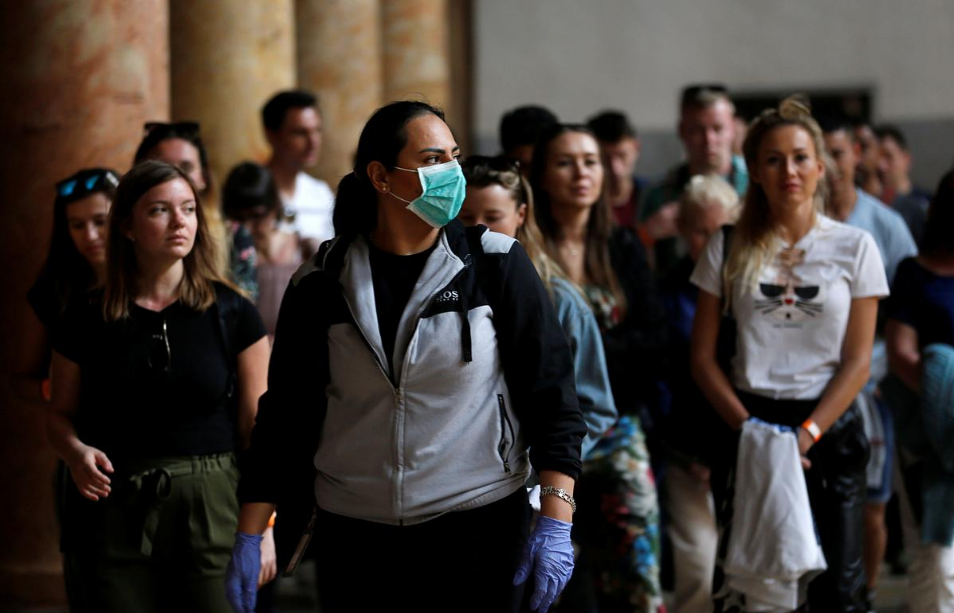 A tourist wearing a mask as a preventive measure against the coronavirus visits the Church of the Nativity in Bethlehem in the Israeli-occupied West Bank, March 5, 2020. /Reuters

A tourist wearing a mask as a preventive measure against the coronavirus visits the Church of the Nativity in Bethlehem in the Israeli-occupied West Bank, March 5, 2020. /Reuters

There is a silver lining behind the novel coronavirus epidemic crisis. In a rare move, Israeli and Palestinian Authority officials sat down at a table on Thursday to coordinate joint efforts to curb the spread of the COVID-19.

The relation between the two sides has been deteriorating since Trump took the office, and any productive communication was cut off after Trump administration's announcement of the "Middle East peace plan."

On Thursday, Palestinian President Mahmoud Abbas declared a 30-day state of emergency on Thursday and Bethlehem's Church of the Nativity was closed following the discovery of seven cases of coronavirus in the traditional birthplace of Jesus.

The Palestinian governor of the West Bank town of Nablus on Thursday ordered its Muslim and Christian holy sites shut as a public health precaution.

At least 40 people have been quarantined in a Palestinian hotel near Bethlehem in the West Bank due to an outbreak of coronavirus. They include 14 American citizens, as well as about 25 Palestinian guests and employees.

Israel, which so far has 17 confirmed cases of the disease, has imposed stringent measures on arrivals from many nations in a bid to contain its spread.