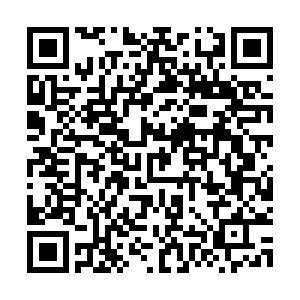 A central government team led by Chinese Vice Premier Sun Chunlan has been in central China's Hubei Province for 40 days to guide the epidemic control efforts.

Since it was deployed by the Communist Party of China (CPC) Central Committee to the coronavirus epicenter of Wuhan on January 27, the team went on dozens of inspection visits.

On the site, the team required timely reception and treatment of patients, checked on the construction progress of new medical facilities, coordinated medical supplies and personnel to the virus-hit province, and warned officials that "deserters" will be "nailed to the pillar of historical shame forever."

The confirmed cases of coronavirus infection started to soar by the end of January in Wuhan, leading to acute shortage of hospital beds, medical personnel and supplies. 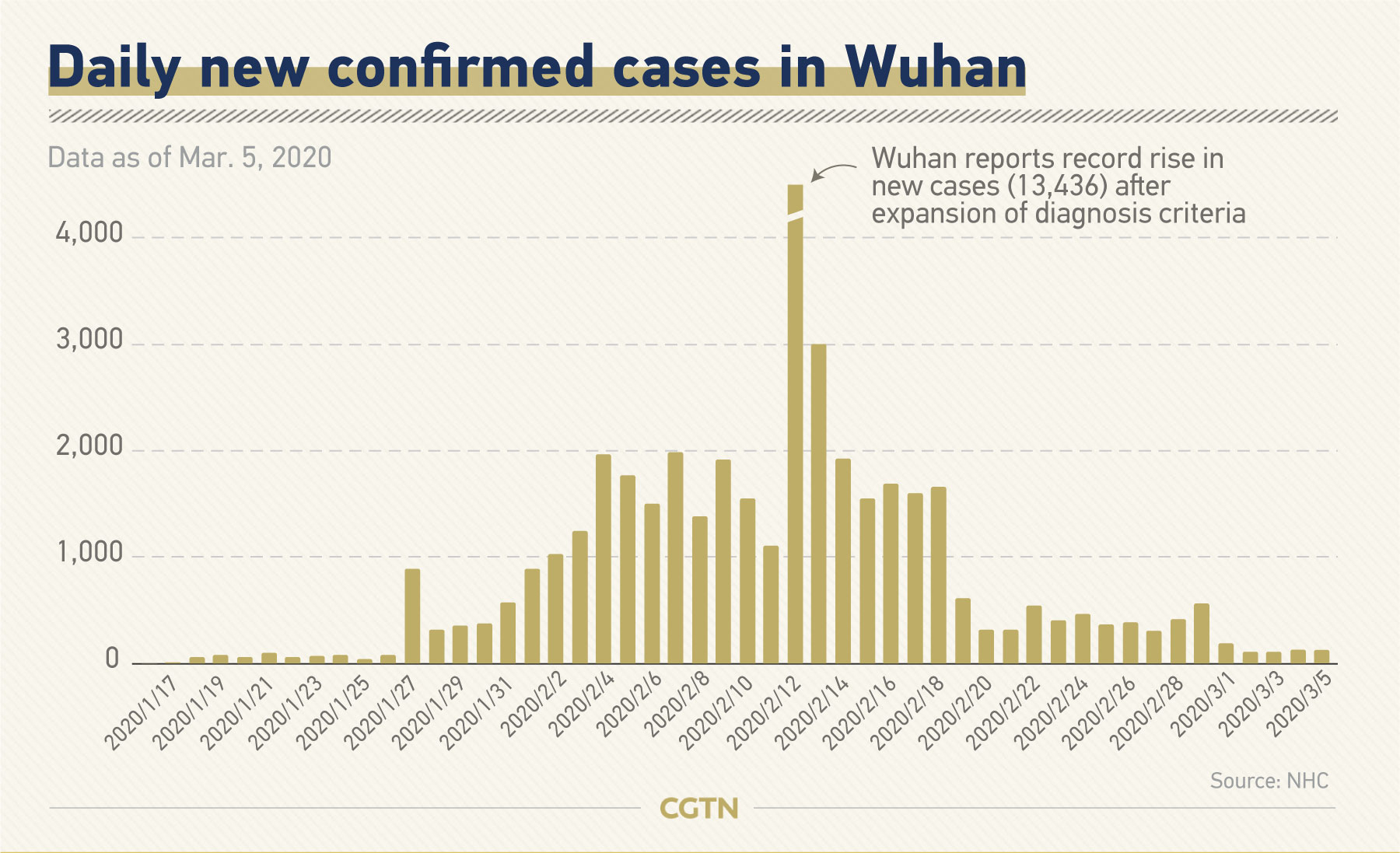 When the team arrived in Wuhan, the whole province could only provide 10,000 protective suits per day – meeting merely one fifth of the actual daily demand, which severely impeded the rescue work.

In less than ten days, all of Hubei's major producers of protective products resumed operations, producing 55 percent of protective suits and 90 percent of N95 masks needed daily within the province.

Currently, China is capable of providing 250,000 protective suits daily to Hubei, exceeding the provincial demand. More than 300,000 N95 respirators are either allocated to or made in Wuhan every day, enough to meet the demand of frontline medical workers.

Sixty-seven ECMO machines, used to support respiratory systems for severe patients, have also been sent to Hubei as of Wednesday.

"The supply and demand of medical devices have been in balance" in the province, said Mao Qunan, head of the planning department of the National Health Commission (NHC) earlier this week.

Medics from across the country were also called upon to assist the fight.

By Sunday, more than 340 medical teams consisting of some 42,300 medical personnel, both civilian and military, had been dispatched to Hubei, most of whom were sent to Wuhan. 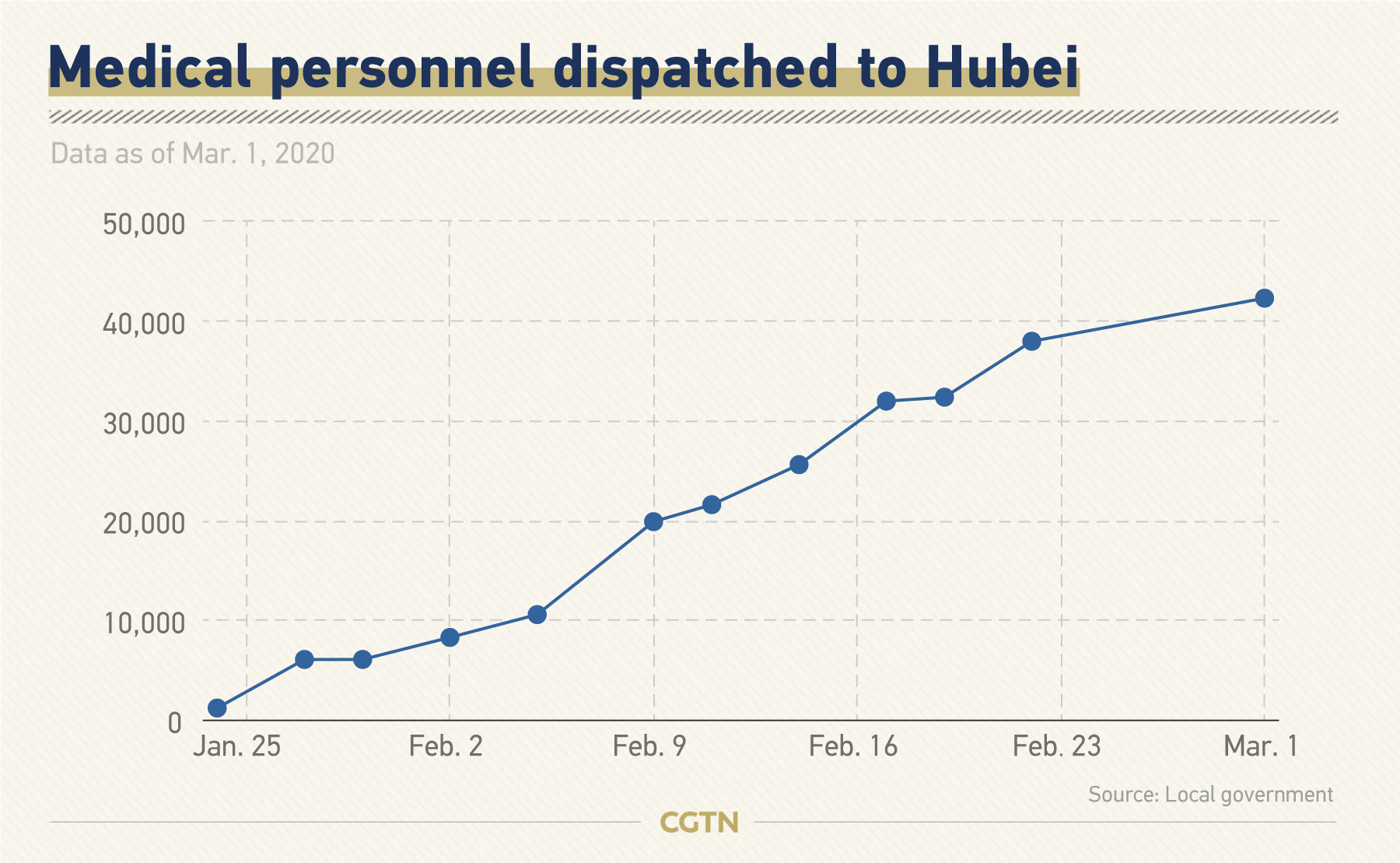 Leave no one unattended

On the same day, the central government team went to inspect a newly-delivered hospital.

Huoshenshan Hospital, modeled on Xiaotangshan Hospital built in Beijing in 2003 to curb the SARS outbreak, was built in 10 days to receive more coronavirus patients. A second one soon followed.

However, these two new hospitals alone still could not meet the surging demand. 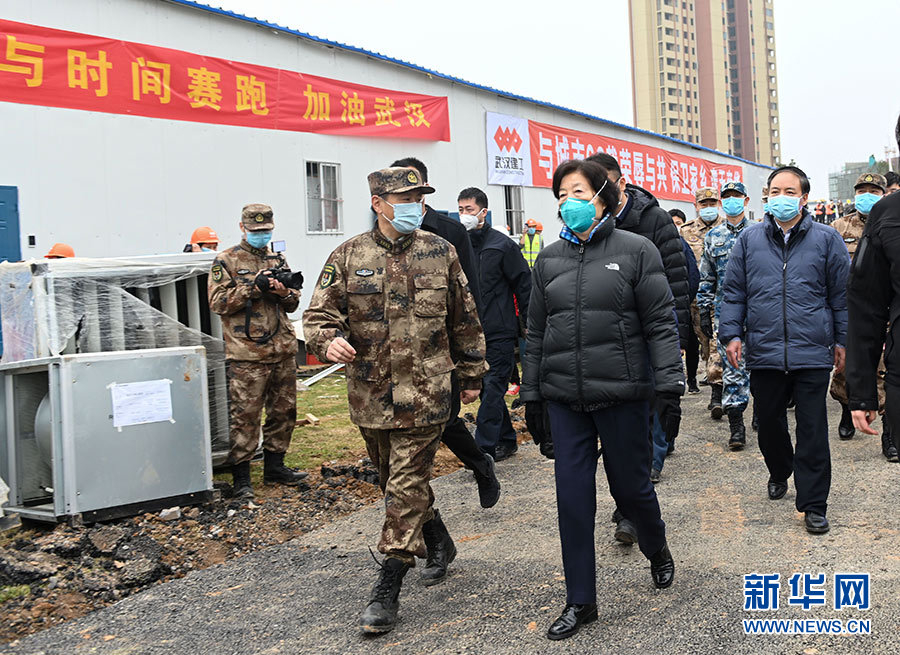 The team held a meeting on February 3, vowing to "leave no patients unattended."

They made a vital decision to convert gyms, exhibition centers and other avenues into temporary hospitals to cope with the bedding shortage.

Construction began at midnight, right after the meeting. Within 29 hours, three of these facility-turned temporary hospitals accommodating over 4,000 beds were put into use.

Wuhan has so far built 16 such facilities with more than 13,000 beds to receive patients with mild symptoms. These hospitals have treated a total of 12,000 patients, or one in every four patients of the novel coronavirus in Wuhan.

Without timely hospitalization, those with mild symptoms could have developed into severe cases, and widespread transmission at community level might have occurred, officials said.

"Looking back, building temporary hospitals is a crucial and significant measure. We have rapidly expanded medical resources in a short time; it is difficult to solve so many beds in a short time by other methods," said NHC Director Ma Xiaowei last week, also a member of the central government team. 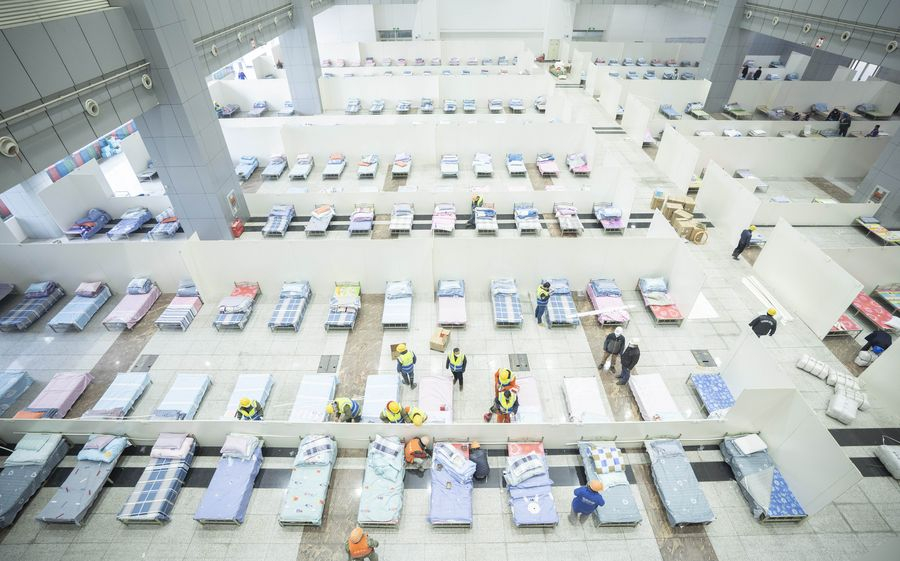 Over time, designated hospitals kept expanding capacity to receive patients in more critical condition. Within a month, such hospital beds increased from some 5,000 to more than 23,000, of which more than 9,000 were prepared for severely-ill patients.

Wuhan has also used private hospitals, hotels, schools and local communities as designated sites for quarantine, observation and treatment. There were nearly 70,000 beds available at quarantine sites by the end of last month.

Bedding shortage is no longer a problem.

"Leaving no patients unattended" also referred to the control of epidemic sources.

On February 6, Vice Premier Sun Chunlan stressed all-out efforts to search for, receive and treat patients confirmed or suspected to be infected with the coronavirus.

A conference that day ordered the megacity with a population of over 10 million to make all-out efforts to locate them.

Daily new confirmed cases rose at first, and then dropped sharply as more patients were identified and hospitalized.

Recent data shows that new suspected cases and the mortality rate in Wuhan have also been declining, while the recovery figures started to surge.

The daily number of newly recovered and discharged patients has surpassed 1,000 since February 24. The figure topped over 27,000 on Thursday – accounting for over 50 percent of total confirmed cases in Wuhan.

As the next step, the central guidance team will continue to focus on epidemic containment in urban and rural communities and treatment of patients, optimize medical resource allocation, and to ensure the supplies of living materials for the residents who have lived in a city put on lockdown for over 40 days.

The central government team has come to tell Wuhan and the whole country that the city "is not a 'lonely island' that fights on its own," said one of the team members.