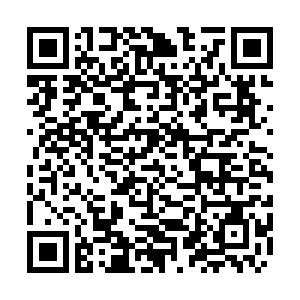 Chinese diplomat Zhao Lijian on Sunday retweeted several tweets, with one of which suggested that COVID-19 has been in the United States for some time.

"I really think COVID-19 has been here in America for awhile," wrote Twitter user "the Lizard King," who said on description that she is a "mama."

"Do you guys remember how sick everyone was during the holidays/early January? And how everyone was saying they had the 'flu' and the flu shot 'didn't work'?" 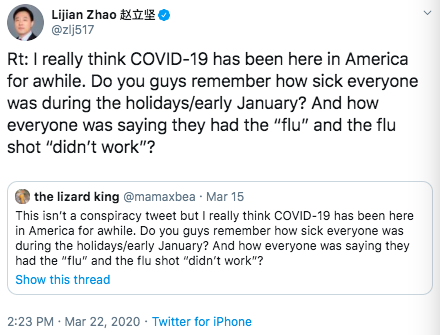 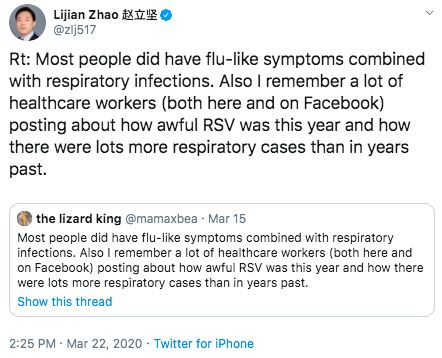 Tensions between Beijing and Washington have mounted drastically after U.S. President Donald Trump has doubled down on blaming China for the coronavirus pandemic.

Despite a chorus of criticism coming from both other American officials and the Chinese government, Trump has repeated his frequent practice of racist virus-designation.

Not surprisingly, Asians and those of Asian descent have thus reportedly faced growing widespread discrimination.

Since last week, Beijing officials including Foreign Ministry spokespersons Zhao and Hua Chunying have been hitting back on Twitter. Zhao pointed out last Friday that U.S. lacks transparency in dealing with the epedemic, demanding a further explanation from Washington while suggesting that America might be the one that brought the virus to China.

"CDC was caught on the spot. When did patient zero begin in U.S.? How many people are infected? What are the names of the hospitals?" he tweeted.

"It might be U.S. army who brought the epidemic to Wuhan," Zhao added, saying the U.S. should "be transparent" and "make public" all its data.

Just a day ago, the two Beijing diplomats picked the U.S. apart for lying about 100 million U.S. dollars of financial aid it pledged earlier to those virus-hit nations.

"U.S. officials said they offered 100 million U.S. dollars to China and other countries. We thank the American people for their kind help," Hua wrote, "but as a matter of fact, we haven't received $1 from the U.S. government."

China says 'not a penny' has received from U.S.