COVID-19 Global Roundup: Governments in the Americas under fire
CGTN 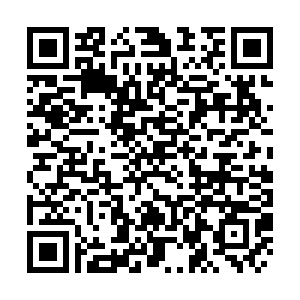 Editor's note: This is the 23rd article in the COVID-19 Global Roundup series. Here is the previous one: When will coronavirus end? 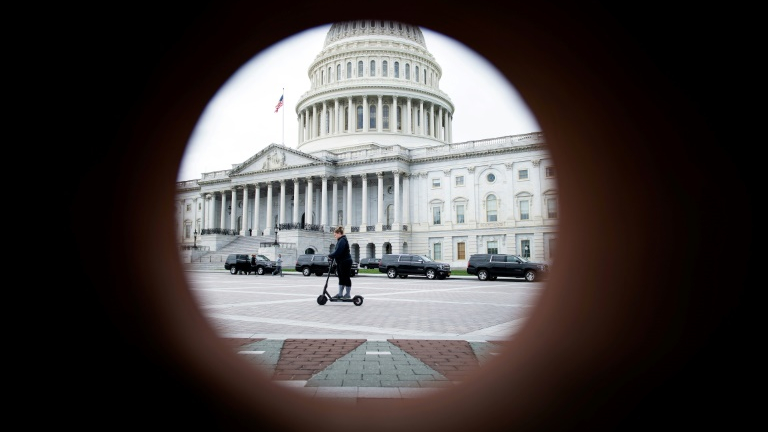 The World Health Organization (WHO) has said the U.S. could become the global epicenter of the coronavirus pandemic as the virus has infected more than 54,812 people there, killing at least 706. But, U.S. President Donald Trump swam against the tide of scientific opinion, talking down the urgency of containing the virus and urging the relaxation of lockdown measures in order to bring the economy back to normal.

Aside from Trump, Brazilian President Jair Bolsonaro and Mexican President Andres Manuel Lopez Obrador have also faced increasing criticism for their cavalier attitude toward the virus. Bolsonaro called the lockdown measures taken the city of Sao Paulo "hysteria," and Lopez Obrador urged people to keep going out in a video.

What is the state of coronavirus in the Americas? How are governments handling the challenges? Here are details. 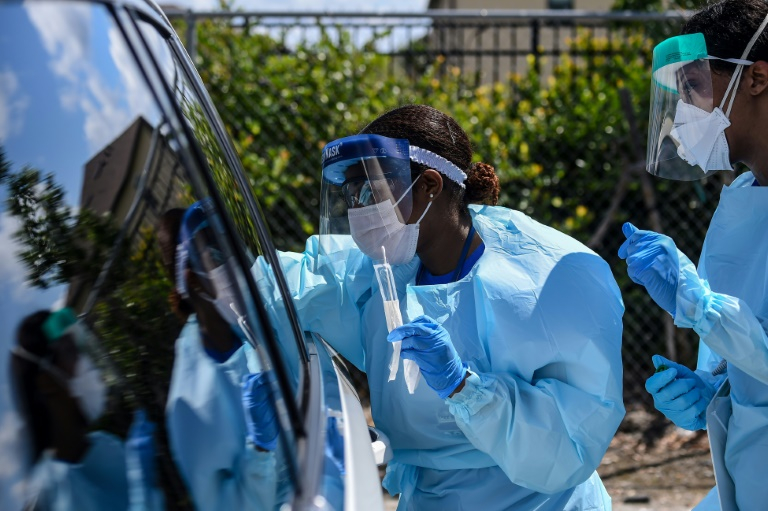 U.S.: Trump wants to save economy, while others try to save lives

Social distancing and quarantine measures have been introduced across much of the United States, as health experts advised that the measures are the only way to prevent the easily transmitted, potentially fatal illness from multiplying uncontrollably. However, President Donald Trump believed the current response has been blown out of proportion, saying the U.S. lost "thousands and thousands of people" each year to the flu, and for this the country didn't just turn off.

He insisted Tuesday that he wanted the coronavirus lockdown relaxed in the United States by mid-April, warning that keeping the measures in place could "destroy" the country since his main claim to a second term in office, prior to the coronavirus outbreak, was a strong economy. However, his push for a quick reopening of the economy carries the risk that some will see the move as putting wealth over the survival of the sick, especially the vulnerable elderly population.

U.S. congressional leaders now are wrangling on a nearly 2 trillion U.S. dollar rescue package for businesses and ordinary Americans to save the economy that was humming away two weeks ago. This would be the biggest emergency injection of money into the economy in history, dwarfing even the bailouts of 2008, when the worldwide financial crisis sent the U.S. economy into a tailspin.

Legislators were meeting in Ottawa to approve a 18.6 billion U.S. dollar cash injection. However, discussion of the aid package was quickly suspended after the official opposition Conservative Party threatened to block the legislation, saying the Liberal government wanted to give itself the power to spend without parliamentary approval until the end of 2021.

"The government should not attempt to eliminate parliamentary oversight during a crisis," Conservative leader Andrew Scheer said. He later told reporters that the emergency cash injection could quickly pass if the Trudeau government separated that particular vote from a debate about new powers. Otherwise, the process would be prolonged.

Trudeau insisted that the crisis "requires extreme flexibility and rapidity of response by governments." He pledged the aid package last week in direct support to families and businesses and said he was ready to do more. The government will provide 38 billion U.S. dollars in additional aid through tax deferrals. 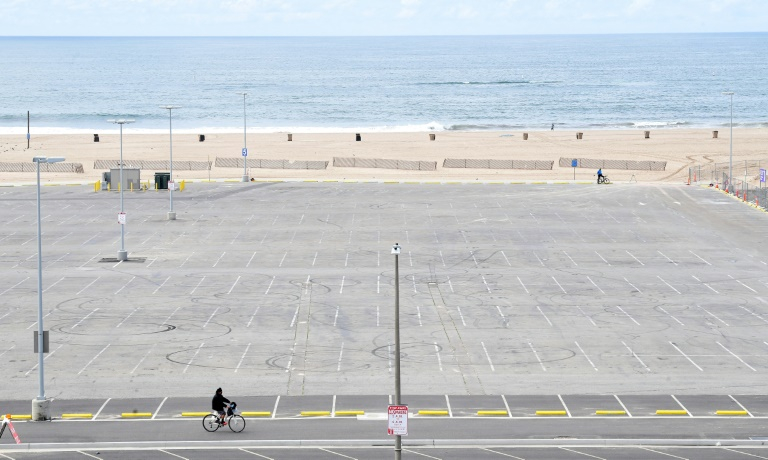 A cyclist rides past an empty parking lot at Santa Monica beach in California, U.S. /AFP

A cyclist rides past an empty parking lot at Santa Monica beach in California, U.S. /AFP

Although opinion polls suggest Lopez Obrador's apparent nonchalance concerns voters, he keeps talking down the risks, delegating responsibility to others and flouting advice to the public.

As officials and allies urged people to stay at home and avoid physical contact, Lopez Obrador at the weekend again shook hands with dozens of supporters in southern Mexico, then issued a video encouraging people to keep going out. He argued that he must keep people's spirits up and that to suppress activity would hit poorer Mexicans who live hand-to-mouth, his core constituency. Critics say those are the very people most at risk from the virus.

With the coronavirus spreading in Mexico, which now has 367 confirmed cases and five deaths, the government on Tuesday stepped up its response, banning meetings of over 100 people and said it would stop issuing passports both in Mexico and abroad from March 27 to April 19 as a measure to prevent contagion.

The government also announced some work restrictions, low or zero interest loans for small businesses, protections for the elderly and vulnerable, and said some military medical facilities would be opened to the public.

Brail's largest city of Sao Paulo began fifteen days of lockdown to fight the spread of the coronavirus on Tuesday. This after Brazil's own president, Jair Bolsonaro, has faced fierce criticism for his cavalier treatment to combat the threat, which he describes as a "little flu."

Coronavirus deaths in Brazil on Tuesday rose to 46 from 34, and the number of cases rose to 2,201 from 1,891, according to government figures. Wanderson de Oliveira, a health ministry official, told reporters Brazil would vastly expand testing in the coming days.

Bolsonaro, like Trump, prior to the coronavirus paid more attention to developing the economy. He publicly criticized the media for inflating the crisis saying, "The people will soon know they have been tricked by those governors and the mainstream media."

Economic prospects for Brazil, Latin America's largest economy, are worsening amid the pandemic. Data showed consumer confidence fell to a three-year low in March, and retail sales in January declined at the fastest rate in over a year, indicating consumer spending was off to a weak start in 2020, even before the coronavirus outbreak.

The slowdown is set to worsen as Sao Paulo began a two-week lockdown, ordering all non-essential services and businesses to close. 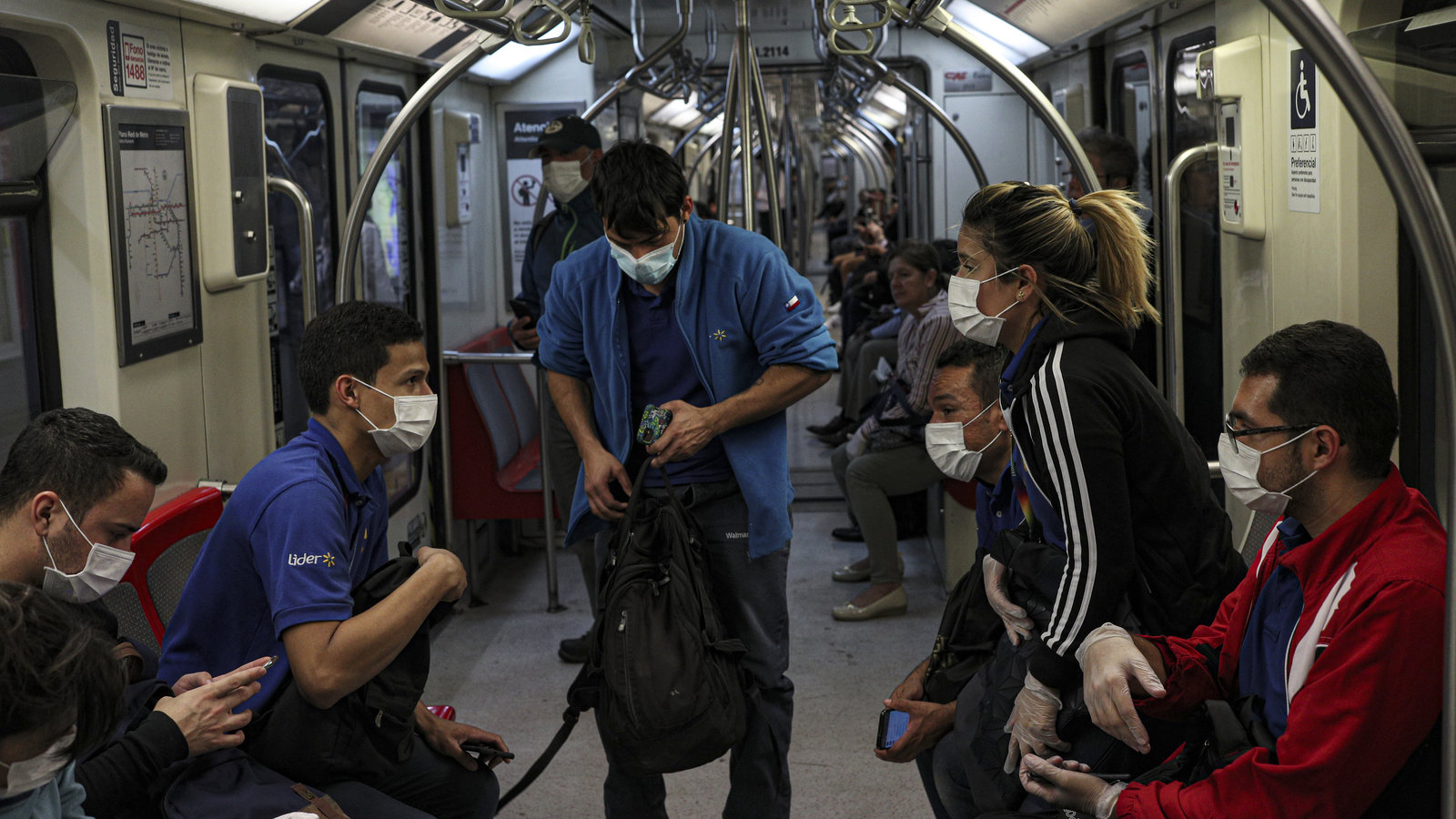 Supermarket workers wear face masks as a precaution against the spread of the novel coronavirus inside the metro in Santiago, Chile, March 18, 2020. /AP

Supermarket workers wear face masks as a precaution against the spread of the novel coronavirus inside the metro in Santiago, Chile, March 18, 2020. /AP

Thousands of Colombians rushed to return to their home cities on Tuesday while others hurried to banks, supermarkets and other shops before the late-night start of a mandatory 19-day national quarantine meant to curb the spread of coronavirus. The quarantine will run until April 13. So far the country has reported 306 cases of the disease and three deaths.

The government of President Ivan Duque has ordered Colombians to stay in their homes, blocked international and national flights and restricted the use of long-distance public transport.

People are allowed out under 34 exceptions which include travel for medical staff and delivery workers. One person per household is allowed to go buy food and medicine.

Violation of the measures can mean up to eight years in prison and large fines, which has sparked criticism with some saying this is too harsh.

Chile: President faces calls to place the country under quarantine

President Sebastian Pinera is facing growing calls to take far stronger measures to tackle the coronavirus, after officials announced on Tuesday the number of cases has risen to 922, an increase of more than 170 in just one day.

The government last week announced a "state of catastrophe," allowing Pinera to deploy the military to safeguard Chile's critical infrastructure and supply lines. Borders are closed to nonresident foreigners, and a nighttime curfew from 10 p.m. to 5 a.m. began on Sunday.

Pinera now faces calls to place the country of 19 million under full quarantine after the curfew caused large crowds of workers to flood the metro system in Santiago, as they rushed to get home before the capital's transport links shut down, which prompted accusations that Pinera is endangering Chileans in order to protect the economy.

Fifty-six mayors throughout Chile have sent a letter to Pinera expressing "the urgent need to move to a national mandatory quarantine as soon as possible." The quarantine would mean following the example of neighboring Argentina, which ordered all Argentines staying at home after the obligatory quarantine announced on March 19.

In Chile, the virus outbreak coincides with profound social division that erupted in October with a wave of huge anti-government protests over social inequality. The demonstrations continued sporadically, and at times violently, until the middle of this month.