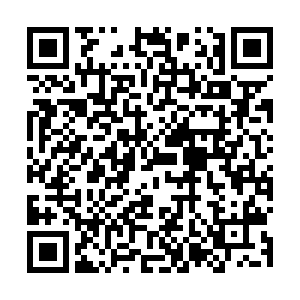 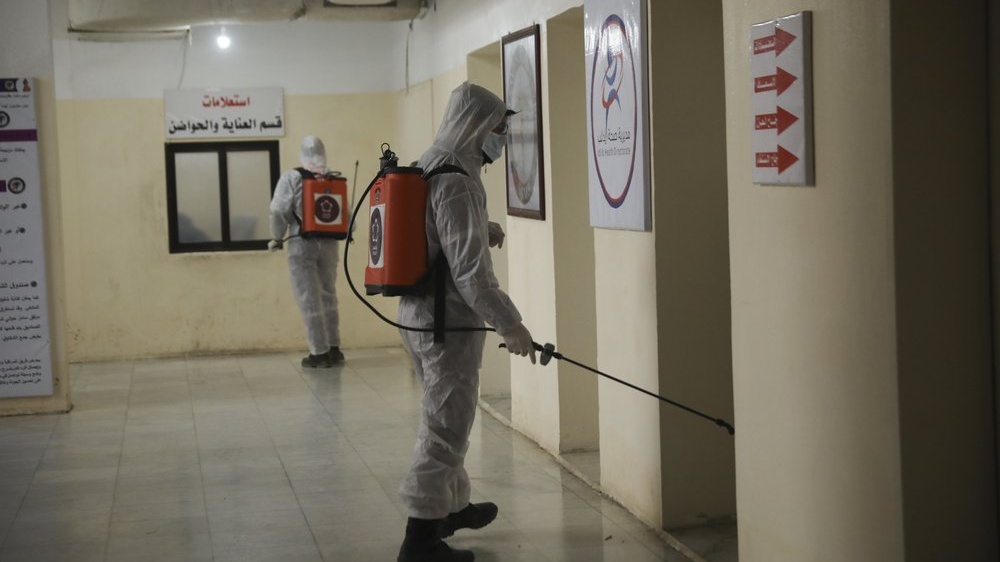 Members of a humanitarian aid agency disinfect a hospital as prevention against coronavirus in the city of Idlib, Syria, March 19, 2020. /AP

Members of a humanitarian aid agency disinfect a hospital as prevention against coronavirus in the city of Idlib, Syria, March 19, 2020. /AP

The UN special envoy for Syria has called for a nationwide ceasefire to give the war-torn and splintered country a fighting chance against the new coronavirus amid fears an outbreak could have grave consequences.

"I am appealing specifically for a complete, immediate nationwide ceasefire throughout Syria to enable an all-out-effort to suppress COVID-19 in Syria," said Geir Pedersen on Tuesday.

"The long-suffering Syrian people desperately need a sustained period of calm throughout the country respected by all parties," he stressed.

Unrest has gripped the Middle Eastern country since 2011, killing hundreds of thousands, uprooting half of the population and devastating vital infrastructure needed in the face of the public health emergency.

Violence has subsided as government forces and its allies recaptured much of the country's territory, but the situation in the northern part of Syria remains precarious.

Syria is free of coronavirus but an outbreak could be costly

The province of Idlib in the country's northwest is the last stronghold for forces opposed to President Bashar al-Assad and has been the site of fierce fighting, which slowed earlier this month after Russia and Turkey agreed to a ceasefire. The truce is holding, but many fear it could collapse anytime.

The northeast is under the control of the Kurdish-led Syrian Democratic Forces (SDF), whose close presence to Turkey's southern borders irks Ankara and prompted it to launch military offensives in the region.

"Ceasefire agreements (in northeast and northwest Syria) remain fragile and renewed violence could erupt at any moment," warned Pedersen.

"This would have dire implications for Syria and impede the global response to COVID-19 at large."

Syria on Sunday announced its first COVID-19 infection. The Minister of Health Nizar Yazigi said the patient is a woman in her twenties who showed no symptoms and is in medical isolation for 14 days. She had come from abroad.

No other cases have been reported since, but there is concern that if things get out of hand, challenges brought about by a decade of conflict could spell devastating news for a population already living on the razor's edge. 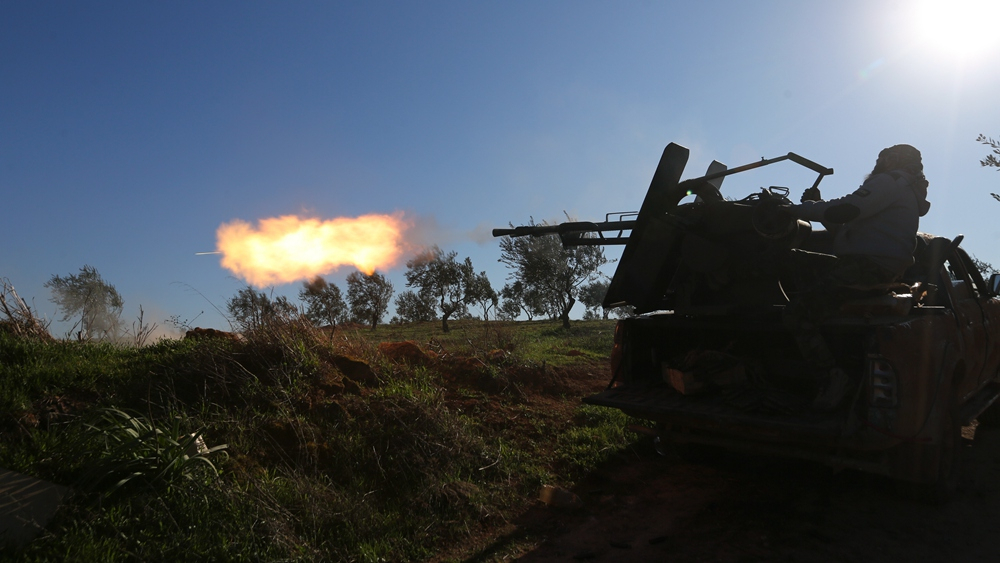 The protracted war has fragmented Syria into a patchwork of areas controlled by rival powers and left the country's public health care system in shambles. The situation is especially worrisome in regions outside the purview of the Syrian government, where health care infrastructure is virtually nonexistent and medical resources and health professionals are in short supply.

Damascus has been on the offensive even before announcing its sole case with authorities introducing a host of measures to stem the spread of the coronavirus.

President Assad on Sunday granted pardons and reduced sentences for several crimes committed before March 22 in a move that one official with the Syrian Ministry of Justice described as having "practical considerations" amid the coronavirus pandemic to "ease congestion in prisons," according to state media. Syrian authorities are also implementing a mandatory nighttime curfew from 6 p.m. to 6 a.m. starting Wednesday.

In other parts of the country outside Assad's control, the response has been disproportionate, reflecting the mammoth task of securing the whole country against COVID-19.

In Idlib, some 1,000 health care workers were mobilized and intensive care units in three hospitals were converted into isolation wards with ventilators, according to the World Health Organization (WHO). In the Kurdish-led northeast, the SDF has declared a two-week lockdown as a preventive measure amid reports of modest resources and limited capability to cope with the contagion.

WHO spokesperson Hedinn Halldorsson said 300 coronavirus test kits will be delivered to a lab in Idlib along with protective gear this week. The organization has also supplied the Syrian government with testing materials. 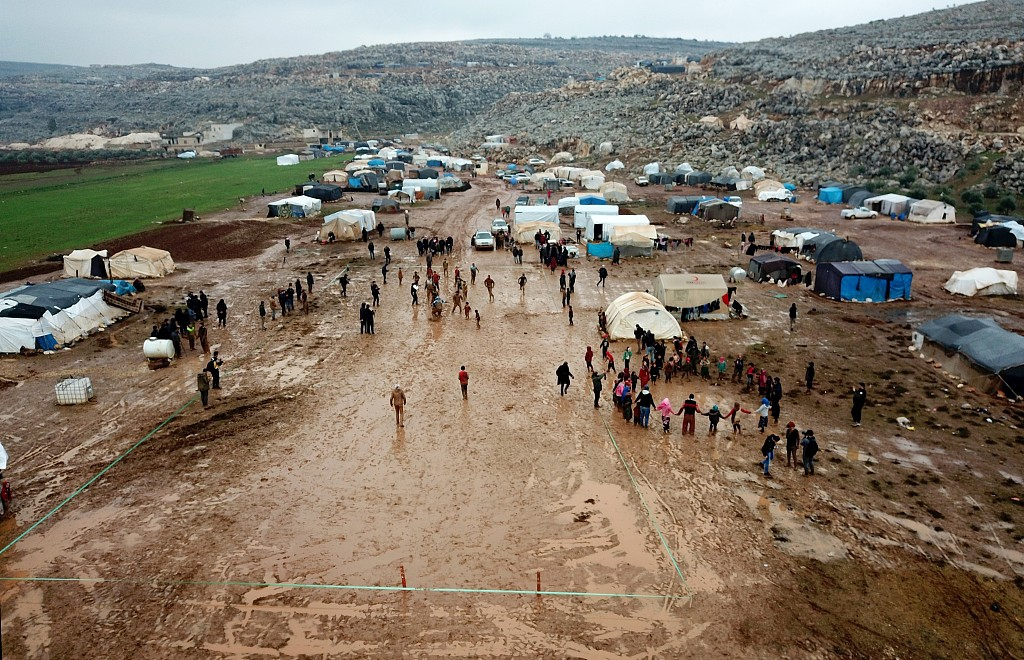 A soccer match is underway at a camp in Sarmada district of Idlib, Syria on January 3, 2020. /VCG

A soccer match is underway at a camp in Sarmada district of Idlib, Syria on January 3, 2020. /VCG

Compounding fears of spiraling infection in Syria are the country's sprawling displacement camps, where living conditions are grim. Some 6.1 million Syrians have left their homes to seek refuge elsewhere in the country in the past 10 years. Most have taken up residence in ramshackle houses in overcrowded settlements that lack adequate sanitation and access to basic medical care.

Experts have cautioned that recommended protection measures, like social distancing and hand hygiene, are unattainable in such squalid and congested conditions.

The UN's children's agency UNICEF on Monday sounded the alarm over the repeated water cuts to Kurdish-held areas in northeast Syria, which put around 460,000 people in harm's way during the coronavirus pandemic.

"The interruption of water supply during the current efforts to curb the spread of the Coronavirus disease puts children and families at unacceptable risk. Handwashing with soap is critical in the fight against COVID-19," said UNICEF Representative in Syria Fran Equiza in a statement.

Turkey has been accused of cutting off the water supply from a pumping station in a town that used to be under the SDF control but which Ankara seized last year. The Allouk station is a lifeline for residents of the city of Hassakeh and the tightly-packed Al-Hol and Areesha camps.

"Clean water and handwashing save lives. Water and water facilities must not be used for military or political gains – when they do, children are the first and most to suffer," warned Equiza.