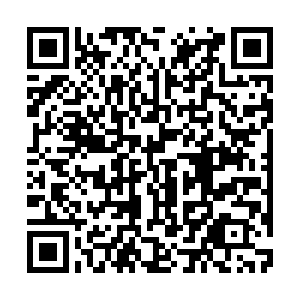 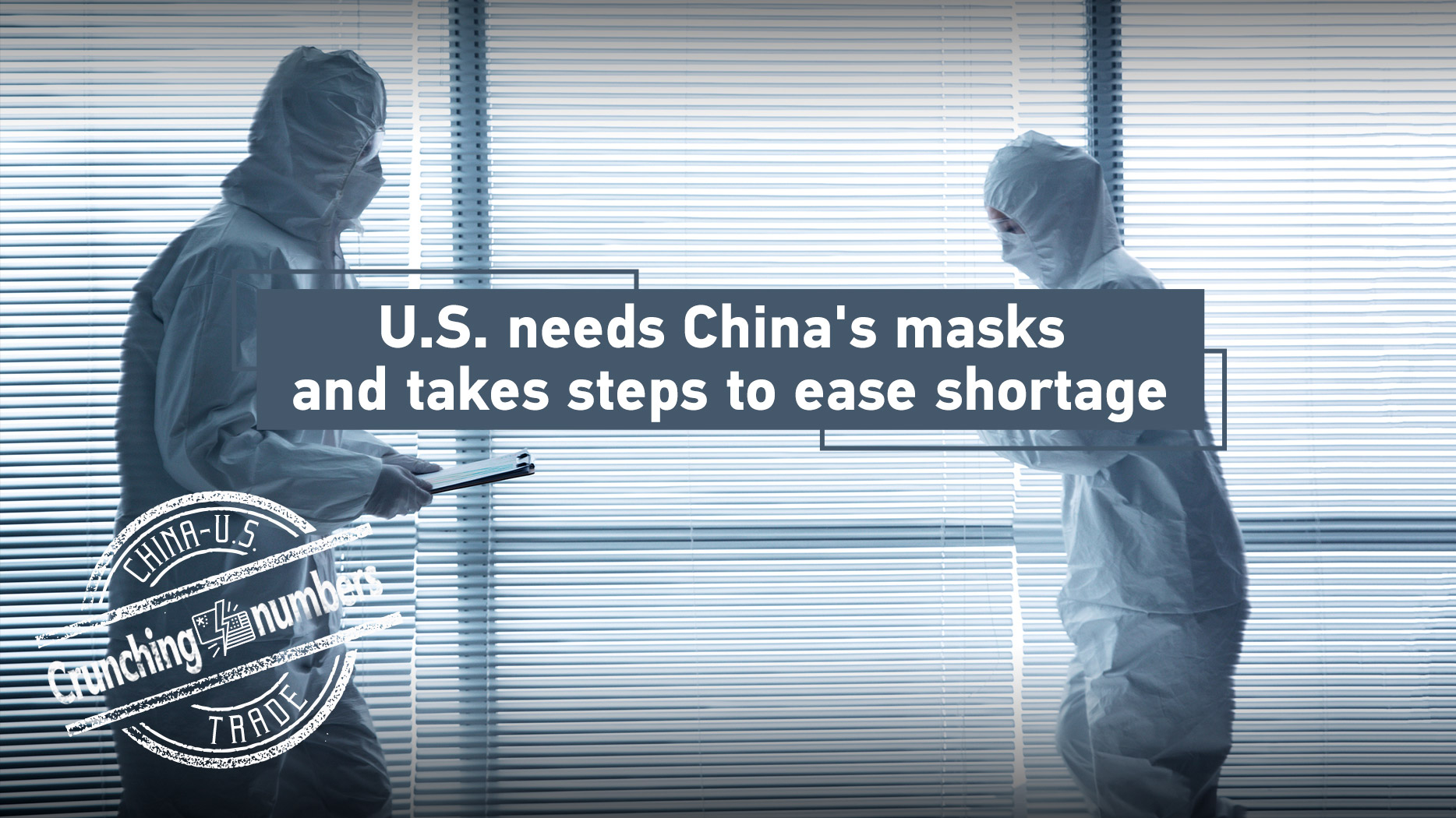 Now, people across the U.S. are sewing face masks. Factories in the U.S., which usually mass-produce hoodies and T-shirts, are re-manufacturing masks to alleviate shortages to fight coronavirus.

As of March 29, cases of COVID-19 confirmed in the U.S. topped 142,000. In early March, the U.S. excluded Chinese face masks and some other medical equipment from tariffs and began to take steps to tackle the dire shortages.

On Sunday, 130,000 N95 masks, 1.7 million surgical masks and other medical supplies from China arrived in the United States. The plane landed at John F. Kennedy airport carrying these goods for distribution in the country's three hardest-hit states: New York, New Jersey and Connecticut.

On March 17, COVID-19 was confirmed in all 50 U.S. states. As the novel coronavirus continues to spread in the U.S., there are not enough medical masks.

As early as February 25, U.S. Health and Human Services (HHS) suggested that the country needs 300 million masks to tackle COVID-19, but the country currently only has a stockpile of 30 million. On March 18, according to The New York Times, a hospital in North Texas was facing the possibility of closing due to the critical shortage of masks. On March 19, The Washington Post reported that mask shortages in Seattle were so acute that doctors were being asked to reuse them. At the same time, COVID-19 cases have surged by 50 percent in one day in Florida, where the supply gap of N95 face masks was up to two million. 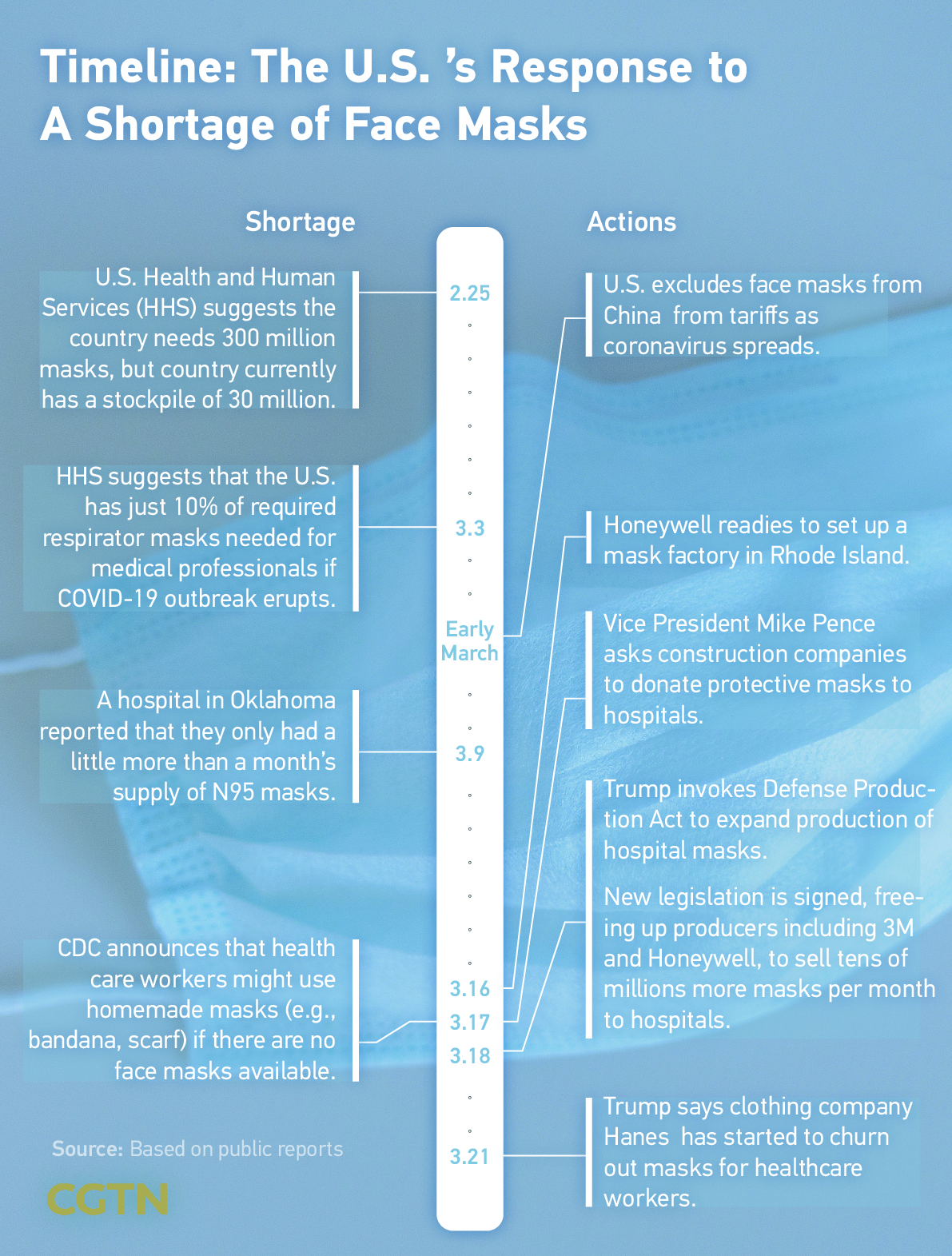 In light of that, the Trump administration invoked the Defense Production Act to expand production of hospital masks and protective gear to prevent the virus spread and fight the "Invisible enemy." The Defense Production Act was enacted in 1950, and it gives the federal government a wide range of powers to enlist private companies to help deal with the national crisis.

It is apparent to see that the U.S. demand for face masks is surging with the outbreak of COVID-19, leading to a direct mask shortage. In addition, COVID-19 spurs the global need of face masks, some countries even seized face masks which should have been shipped to other regions. For example, Germany blocked the export of 240,000 masks to Switzerland because the German federal government set up a new regulation on March 4 which banned the export of medical protection gear to avoid supply shortages.

Mask production lines moving out of the country potentially caused the short supply in the U.S. Medegen Medical Products said in an interview that, currently, the global production of face masks is significantly limited to China, which indicates that changing to U.S. or third-country manufacturers "is not practical or competitive."

Although many well-known mask manufacturers in the world are American companies, their production lines are outside the U.S. For example, the world's largest mask manufacturers, 3M and Honeywell, have factory production lines mainly located in China. That means not enough face masks are made in America to deal with the coronavirus, especially after the U.S. raised tariffs on imported goods, including masks, in September 2019.

National Public Radio (NPR) reported that Mike Bowen, executive vice president of Prestige Ameritech, the largest manufacturer of surgical masks in the U.S., said the problem had been sown 15 years ago. At that time, most mask factories moved abroad where the cost of producing masks was very low. "The surgical mask supply went from being 90-percent U.S.-made to being 95-percent foreign-made in literally one year," said Bowen.

According to the HS Code, face masks are an integral part of the made-up textile articles industry. The latest U.S. Census Bureau data shows 71 percent of U.S. customs import value in made-up textile articles, face masks included, were imported from the Chinese mainland in January 2020. This situation reflects that the U.S. mask supplies relay heavily on China from another angle. 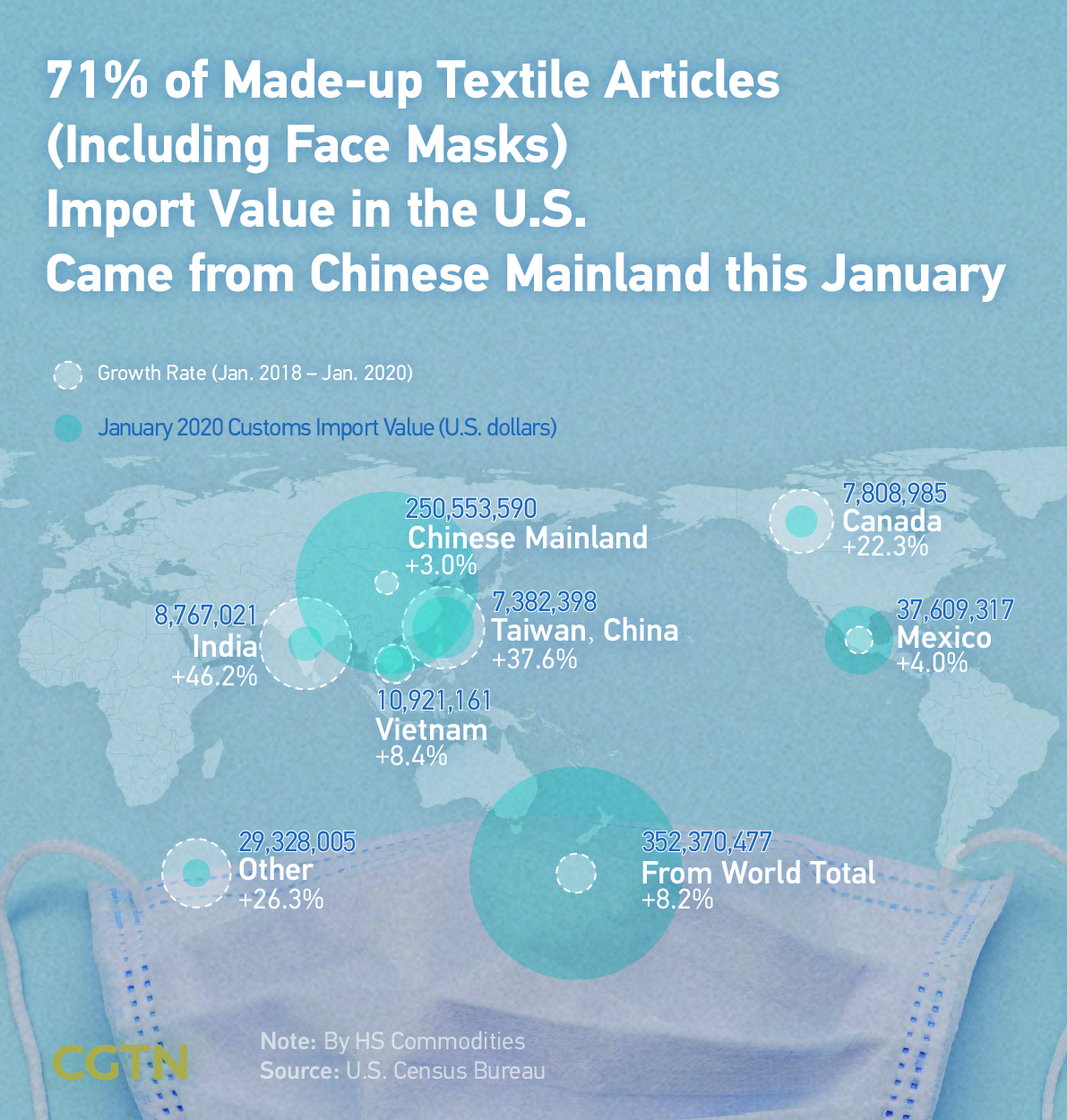 China is the world's leading producer of masks. According to The New York Times: before the coronavirus emerged, China made half the world's masks.

Now Chinese companies have been working overtime to produce protective masks since workers got back to work. Data shows that at the start of February, China's daily output of face masks was a little more than 10 million, while in the next 20 days, it surged to 116 million, which is 12 times that of early February. Capacity utilization rate of mask enterprises have already reached 110 percent by the end of February. 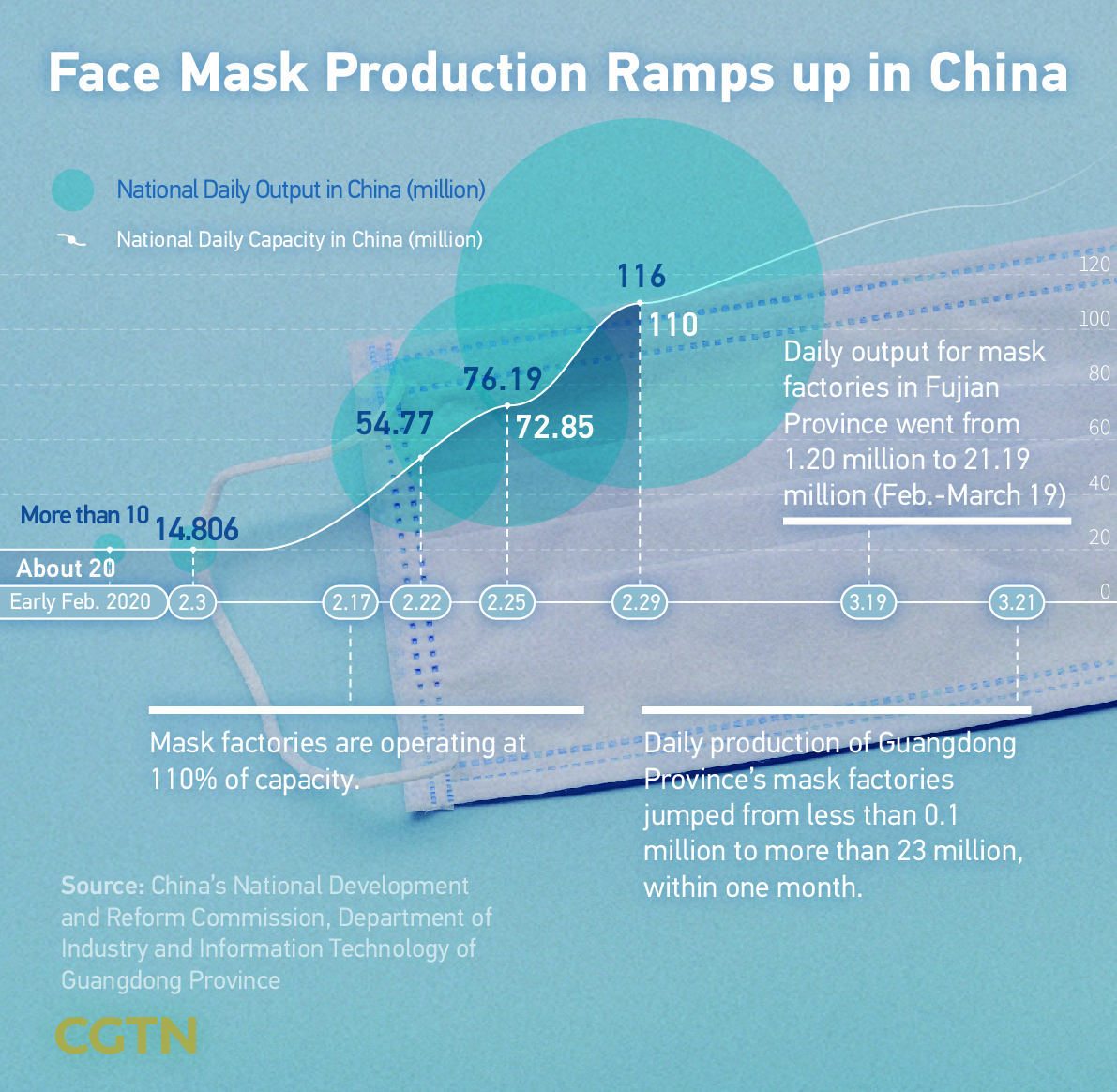 For the provincial level, from early February to March 19, Fujian Province's mask manufacturers increased rapidly from nine to 176, and production capacity of N95 masks increased by more than 10 times.

Guangdong Province is China's major manufacturer. Until March 21, its mask daily production has risen from less than 0.1 million to over 23 million within one month. 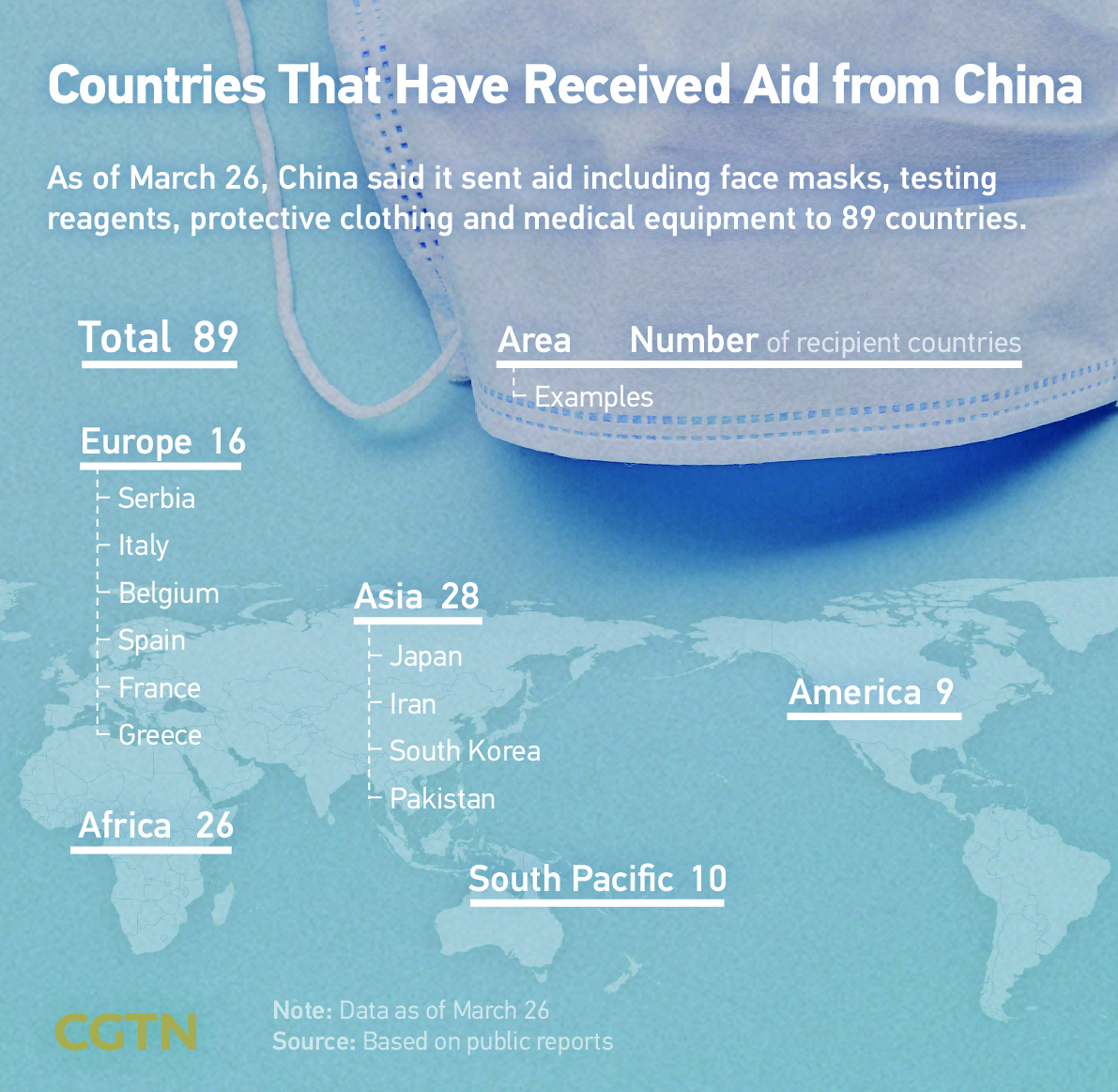 Thanks to the joint efforts of all parties, China's daily mask output has grown significantly. On March 20, the Chinese government claimed that it has provided assistance to 89 countries and international organizations, such as the World Health Organization and the African Union.