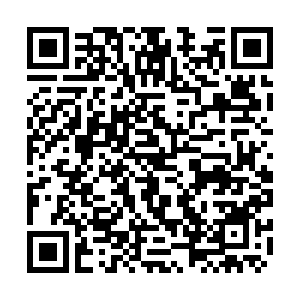 Sheikh Mohammed bin Zayed Al Nahyan, crown prince of Abu Dhabi of the United Arab Emirates (UAE) on Saturday expressed condolences towards the Chinese medical workers who sacrificed their lives in the fight against COVID-19, saying that the UAE stands with China.

"Today we pay our respects as China memorializes the heroic doctors who gave their lives in the fight against COVID-19. In honor of all doctors around the world making the ultimate sacrifice, we will confront this challenge with determination, sheer will, & a spirit of solidarity," he said in his Twitter written in Chinese, Arabic and English. 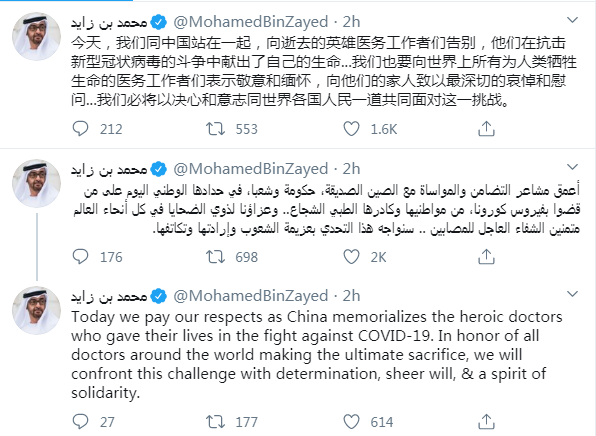 The World Health Organization (WHO) mourned the deceased on Weibo, the biggest social media platform in China, and promised to continue the fight. 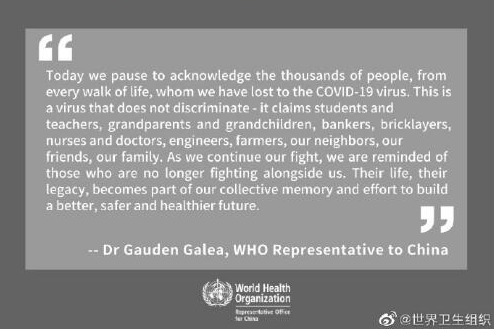 Iranian Ambassador to China Mohammad Keshavarzzadeh paid tribute to Chinese COVID-19 victims in his Tweet and called for solidarity in the fight against the common enemy of mankind.

Embassies of Russia, UK, France, Japan, South Korea, Norway and Argentina to China also expressed their condolences on Weibo. They paid tribute to the medical workers who are fighting on the front line worldwide, and called for international cooperation in virus containment.

China held a national mourning ceremony on Saturday for martyrs in the fight against COVID-19 and victims of the disease. Chinese President Xi Jinping together with other Chinese leaders paid a silent tribute in front of the national flag.

As of Saturday, a total of 81,639 confirmed COVID-19 cases had been reported on the Chinese mainland, and 3,326 people have died of the disease, according to updated information from the National Health Commission.