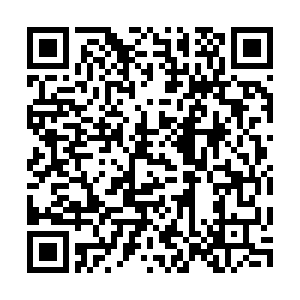 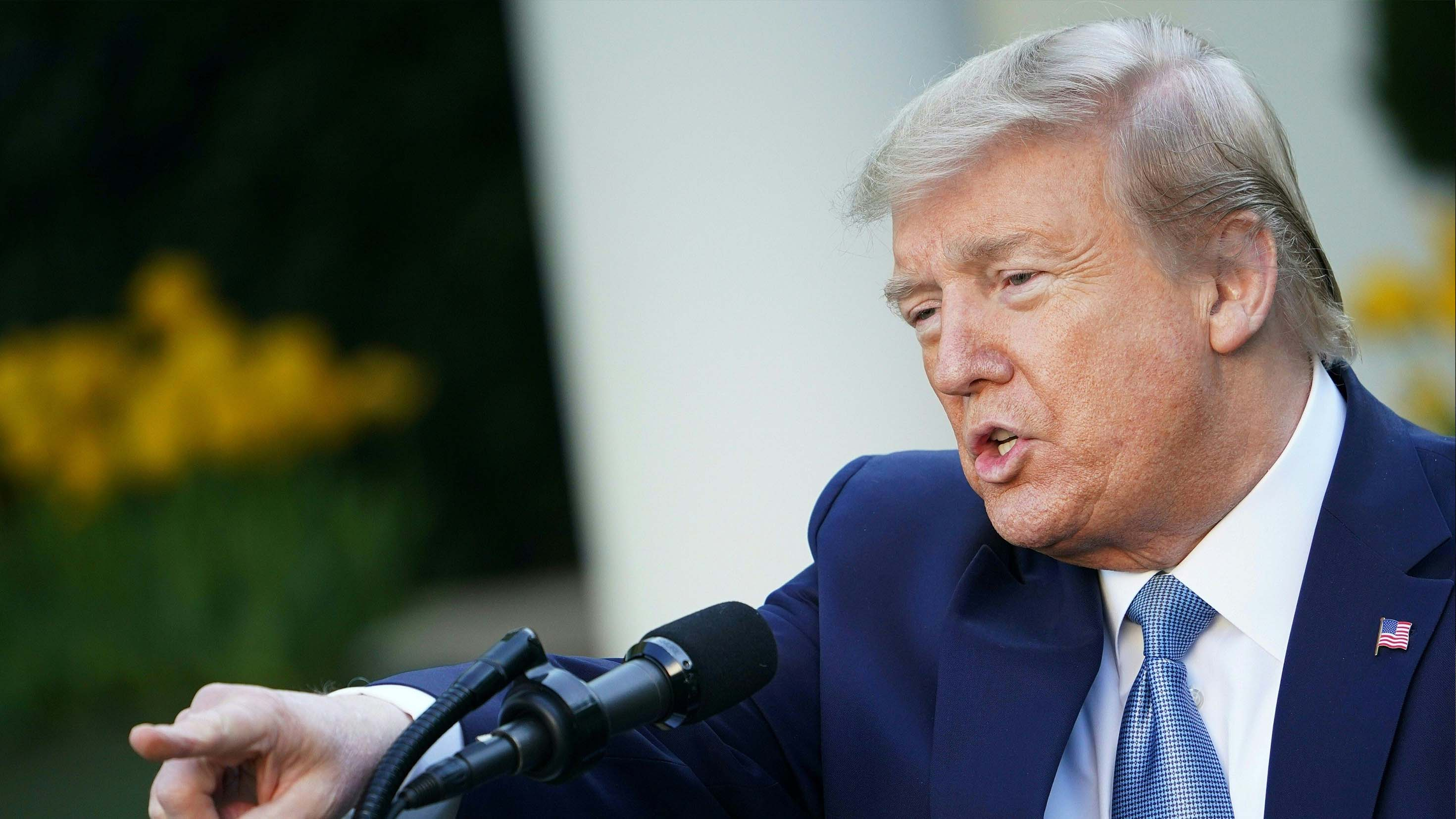 U.S. President Donald Trump said on Wednesday that data suggested the country had passed the peak on new coronavirus infections, and said he would announce "new guidelines" for reopening the economy at a news conference on Thursday.

"The battle continues but the data suggests that the nation has passed the peak on new cases," Trump told his daily White House news briefing.

"While we must remain vigilant, it is clear that our aggressive strategy is working and very strongly working, I might add," Trump said.

The U.S. coronavirus death toll – the highest in the world – surged past 30,000 on Wednesday after doubling in a week.

The coronavirus crisis has hammered the U.S. economy, overshadowing Trump's efforts to win re-election in November.

The Republican president has been pushing to reopen U.S. businesses and end orders that Americans stay home to containht the spread of the disease. During the lockdown, millions of Americans have lost their jobs and thousands of businesses have been forced to close their doors.

On Monday, Trump threatened to invoke his "total" power to force state governors to follow his directives on reopening. On the following day, he backpedaled, saying he was not going to put "any pressure" on governors to reopen.

At Wednesday's briefing, he said again that some states will be reopen sooner, even before the May 1 deadline.

The U.S. has reported nearly 633,000 confirmed cases, according to a running tally by Johns Hopkins University, by far the highest number in the world. The virus has claimed almost 28,000 lives throughout the country – also the world's highest. 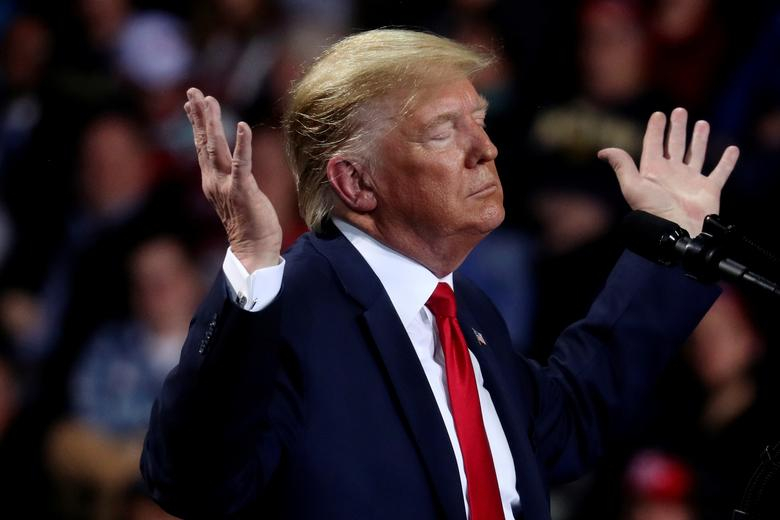 Trump said he does not expect delays in the mailing of coronavirus relief paper checks to millions of Americans, despite changes U.S. Treasury Department officials will need to make in the printing process to add his name.

The Washington Post reported on Tuesday that the president ordered the Internal Revenue Service put his name on the stimulus checks, and his name will appear at bottom left, in the "memo" line.

Even so, most of the "Economic Impact Payments" being issued under the CARES Act passed by Congress to compensate for the economic damage of the pandemic were expected to be made electronically by direct deposit to bank accounts.

The president is eager to gain re-election campaign mileage from the 1,200 U.S. dollars Economic Impact Payment checks that will be delivered to Americans earning less than 75,000 U.S. dollars a year.

Neither Trump's predecessor, Democrat Barack Obama, nor Republican George W. Bush before him put their names on stimulus checks during their White House tenures. 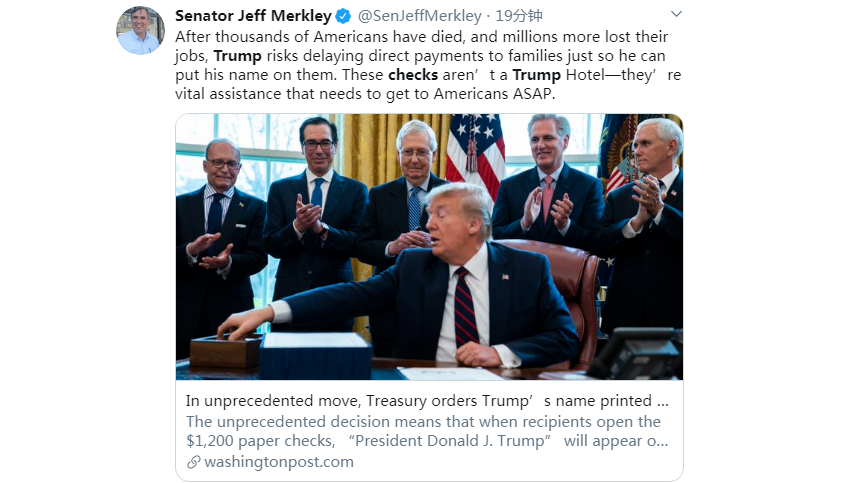 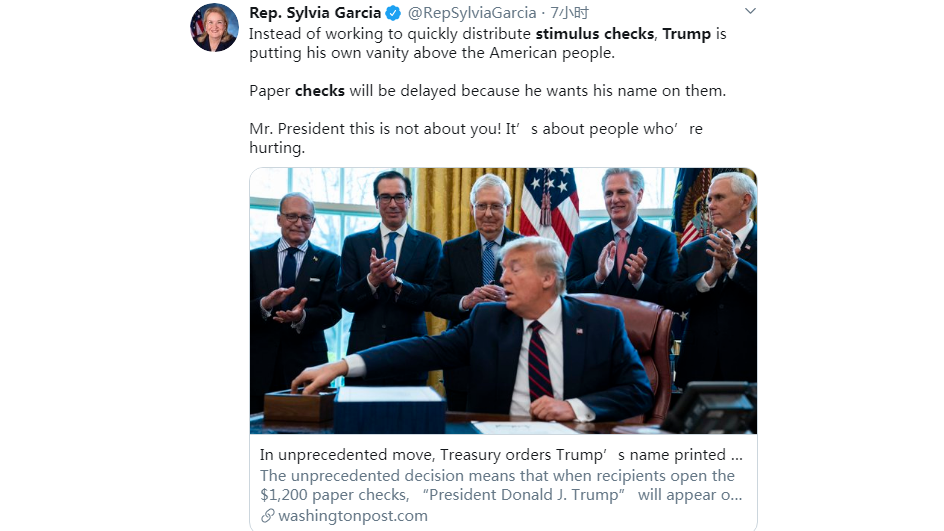 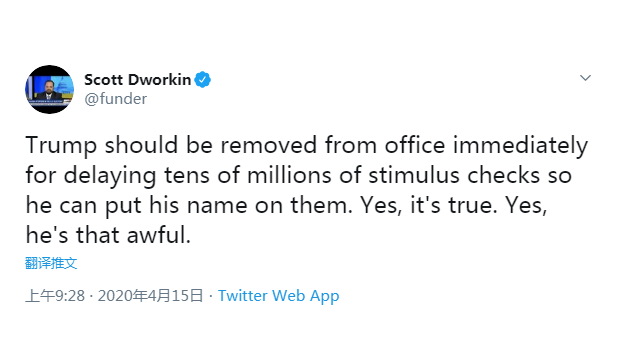 "Delaying direct payments to vulnerable families just to print his name on the check is another shameful example of President Trump's catastrophic failure to treat this crisis with the urgency it demands," Pelosi said in a statement.

Other Democratic lawmakers and members of the public joined in the criticism online, some attacking Trump for politicizing an election-year crisis.

Asked about the unprecedented move, Trump said: "I don't know too much about it, but I understand my name is there."

"I do understand it's not delaying anything."

At Wednesday's briefing, Trump threatened to adjourn Congress to allow him to appoint officials whose nominations he claimed were being blocked by Democrats in the Senate.

"If the House will not agree...I will exercise my constitutional authority to adjourn both chambers of Congress," Trump told reporters.

"I'd rather not use that power," he said.

"We'll probably be challenged in court and we'll see who wins."

The Constitution allows a president to make what are known as "recess appointments" when Congress is not in session.

Trump said he may take the unprecedented step of adjourning both the House and the Senate to allow him to make such appointments.

Although both the House and Senate have not been meeting amid the coronavirus pandemic they have not formally adjourned.

With his impudent move to stop funding the World Health Organization (WHO) in the midst of the coronavirus pandemic, Trump on Wednesday attacked the UN body again for losing trust and credibility in handing the crisis.

He criticized the WHO for opposing travel restrictions on China in early stage, and then mocked Pelosi for encouraging people to go out in San Francisco's Chinatown in late February.

He said, "Tragically other nations put their trust in the WHO and they didn't do any form of ban. And you see what happened to Italy..."

In fact, Italy announced a flight ban from China on January 30, a day ahead of Trump's travel restrictions on China.

He also blamed the WHO for not giving credit to the United States for helping fight AIDS in Africa.

He said "something very bad" is going on with the WHO. And then he ended the press conference by saying "it's cold out."

(Cover: U.S. President Donald Trump gestures as he speaks during the daily briefing on the novel coronavirus, which causes COVID-19, in the Rose Garden of the White House in Washington, DC, U.S., April 15, 2020. /AFP)