What role did China's testing play in containing the spread of COVID-19?
By Zhao Hong 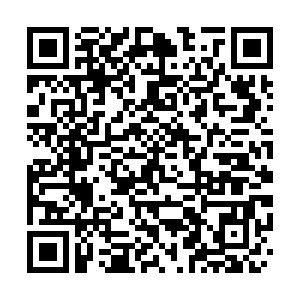 China's testing has enabled a rapid response to the COVID-19 outbreak including diagnosis and identification of suspected cases, the release of recovered patients and screening of close contacts and high-risk groups.

Hubei Province and its capital city Wuhan are the epicenters of the coronavirus epidemic in China. Due to limited diagnostic kits and resources for testing of SARS-CoV-2 genetic material at the early stage, Hubei had adjusted diagnostic criteria to include clinical diagnosed cases as a compliment for the count of new confirmed cases aimed at accelerating the identification and treatment of patients.

This proposed method of early diagnosis was supported by some scientific studies, which indicated that CT scans could show indications of COVID-19 before the onset of symptoms or positive RT-PCR test.

With the revised criterion, suspected cases with radiographic features of pneumonia would be treated as confirmed cases before testing positive. 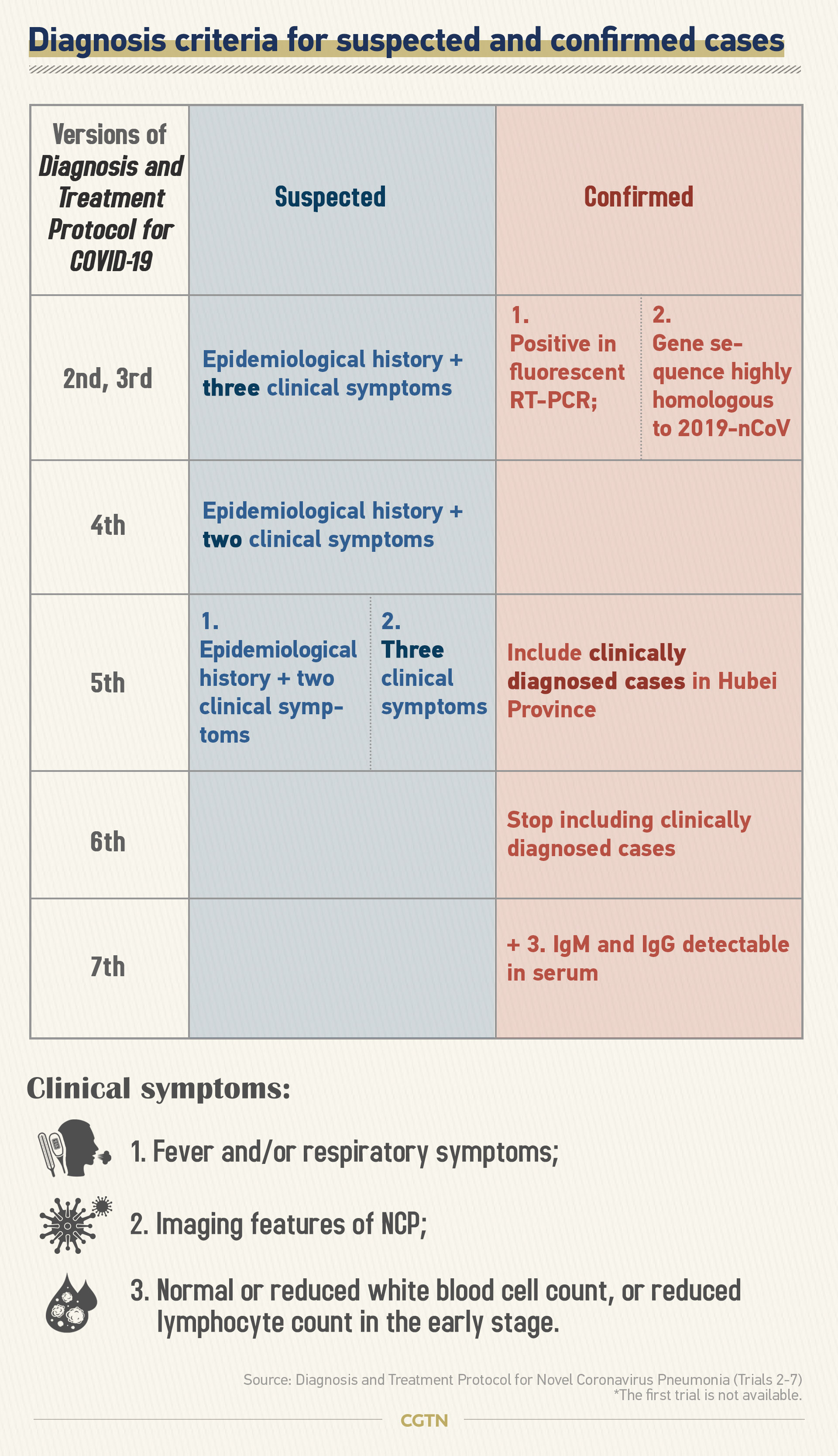 The adjustment was reflected in the daily COVID-19 report of the region from February 12 to 15. On February 12, daily confirmed cases in Hubei Province jumped from a four-digit number to a five. Over 13,000 clinical diagnosed cases were included in the confirmed cases. 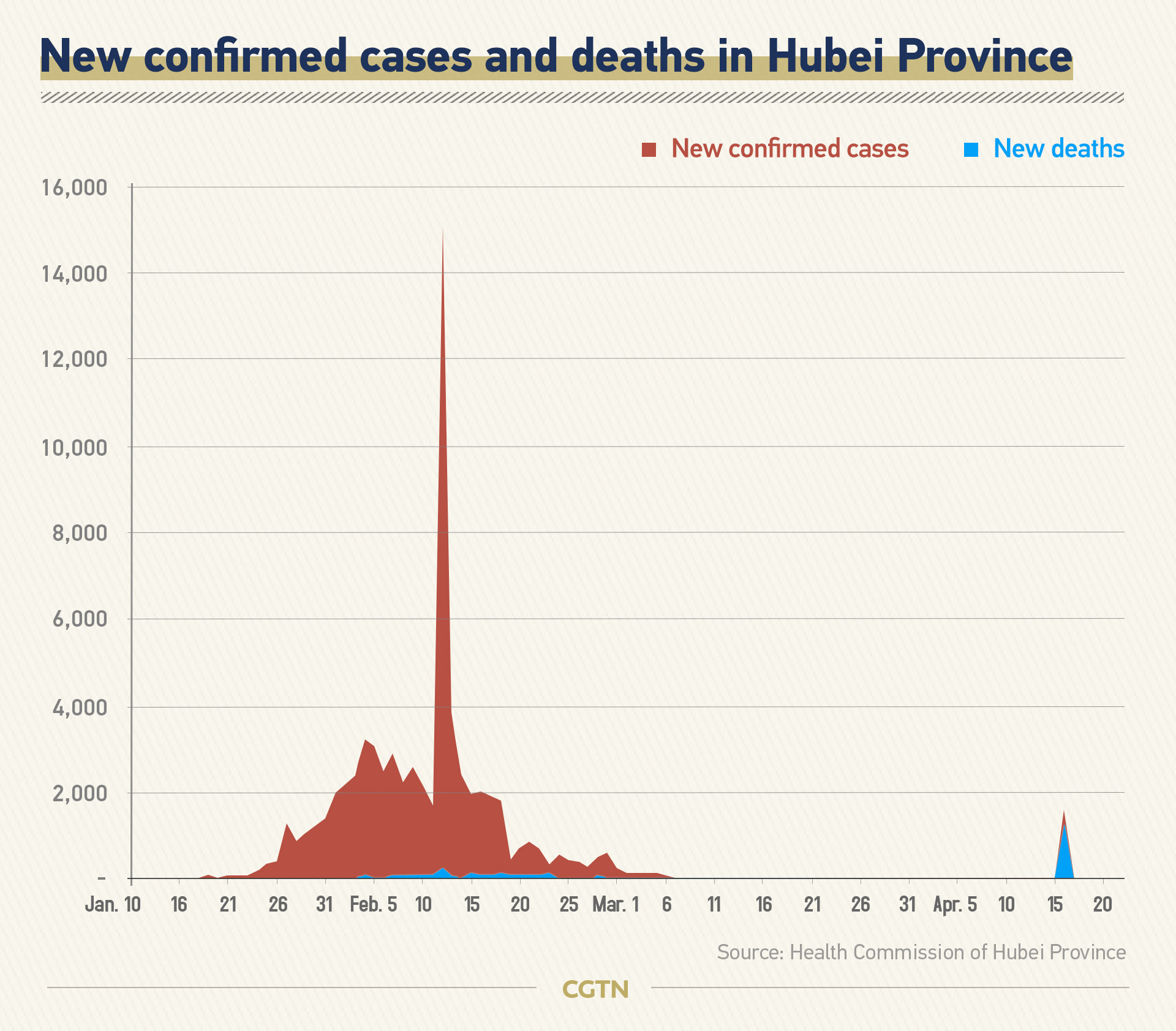 Thorough screening of cases with testing

The second adjustment took place on April 16. After collecting full information, screening and verifying every case, Hubei authorities declared that the total number of confirmed COVID-19 cases in Wuhan as of the end of April 16 was revised up by 325 to 50,333, and the number of fatalities up by 1,290 to 3,869.

The authorities explained that the data discrepancies were mainly due to the surging number of patients at the early stage overwhelming medical resources.

The figures China releases daily include confirmed cases, deaths, suspected cases and the number of the discharged. From April 1, China started to release a tally of asymptomatic patients. 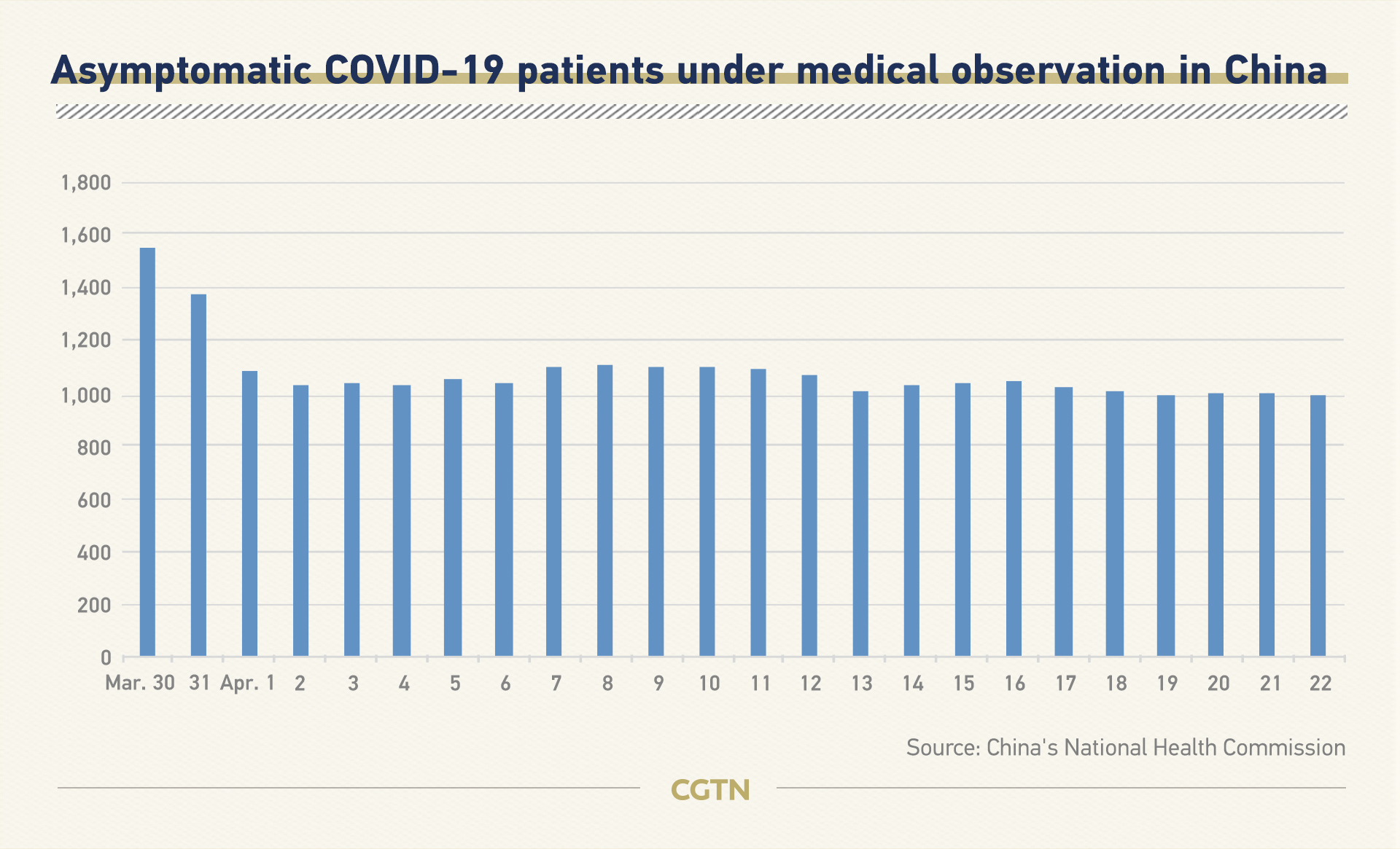 The National Health Commission reported 27 new asymptomatic cases on Wednesday, and the total number of such cases under observation was 984.

Both asymptomatic cases and their close contacts will be quarantined in centralized facilities for 14 days, and they will only be released when they test negative for the virus twice.

The updates after screening and verifying suspected cases and the shift of focus to asymptomatic patients are only possible with China's expanding testing capacity. 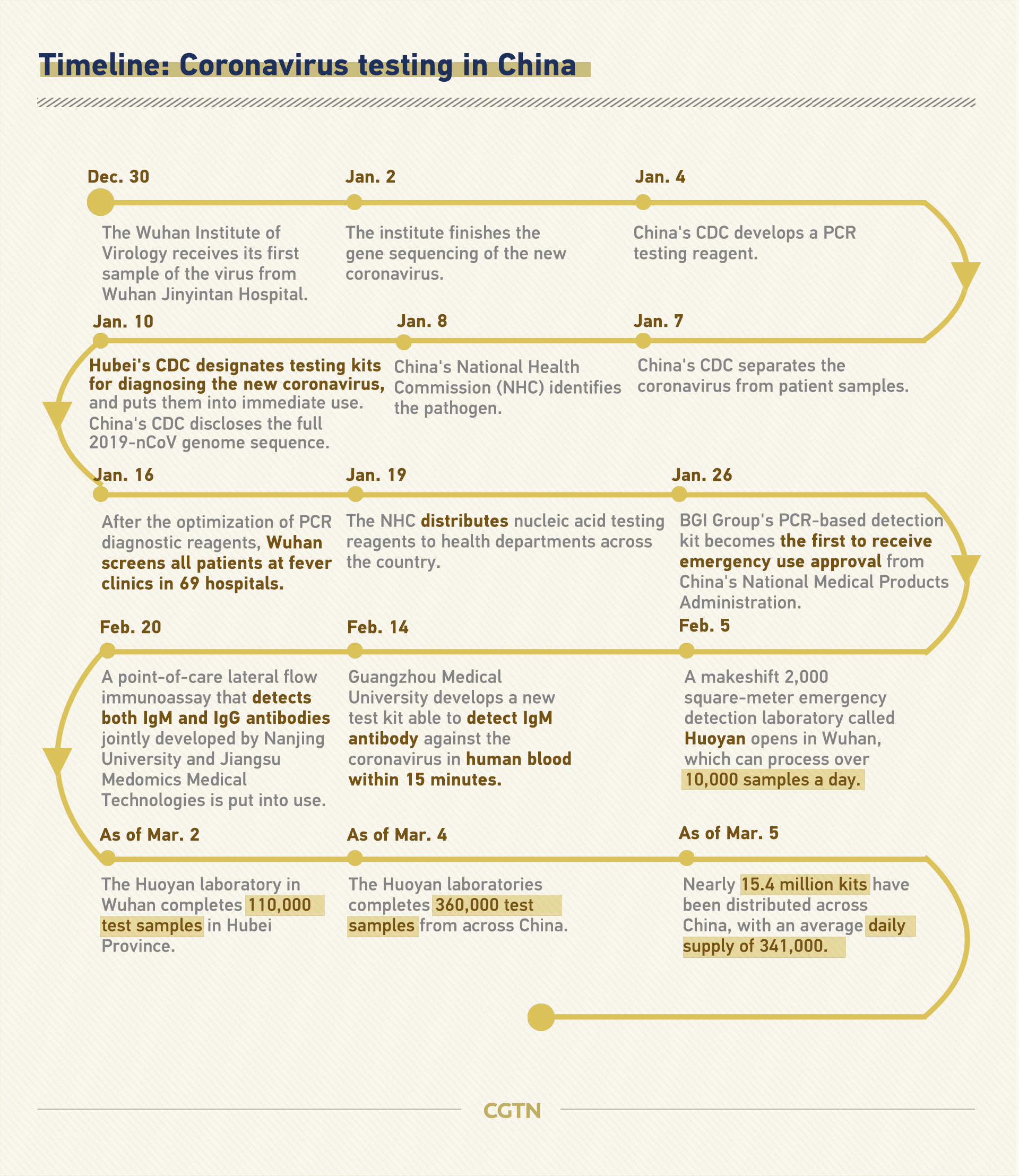 As of Wednesday, China's National Medical Administration had 30 registries for COVID-19 testing kits with 26 manufacturers.

China's State Council stated on a March 6 conference that as of March 5, nearly 15.4 million test kits had been served, with an average daily supply of 341,000. It added that there was inventory enough to fulfill testing for about two million people.

Wuhan's temporary Huoyan laboratory, which was designed with 10,000 tests daily, opened on February 2. It was promptly followed by Huoyan labs in Shenzhen, Tianjin, Beijing, and Shanghai, in 12 cities across China. The daily throughput totaled up to 50,000 tests, further upgradeable to 80,000 per day when necessary.

As of March 4, Huoyan laboratories had completed a total of 360,000 test samples across China.

Guangdong's health commission said on April 15 that it completed 3.65 million nucleic acid tests out of a population of 115 million.

The official statements show that China's test capacity exceeded its domestic needs and it started to export and donate testing kits abroad, including to Cambodia, Italy, and helped build testing labs in Iraq, UAE and Serbia.

Testing in other countries

Testing is necessary for a country to contain the spread of the virus. It plays an indispensable role in Italy and South Korea which have seen an increasing number of tests and a decreasing number of confirmed cases. 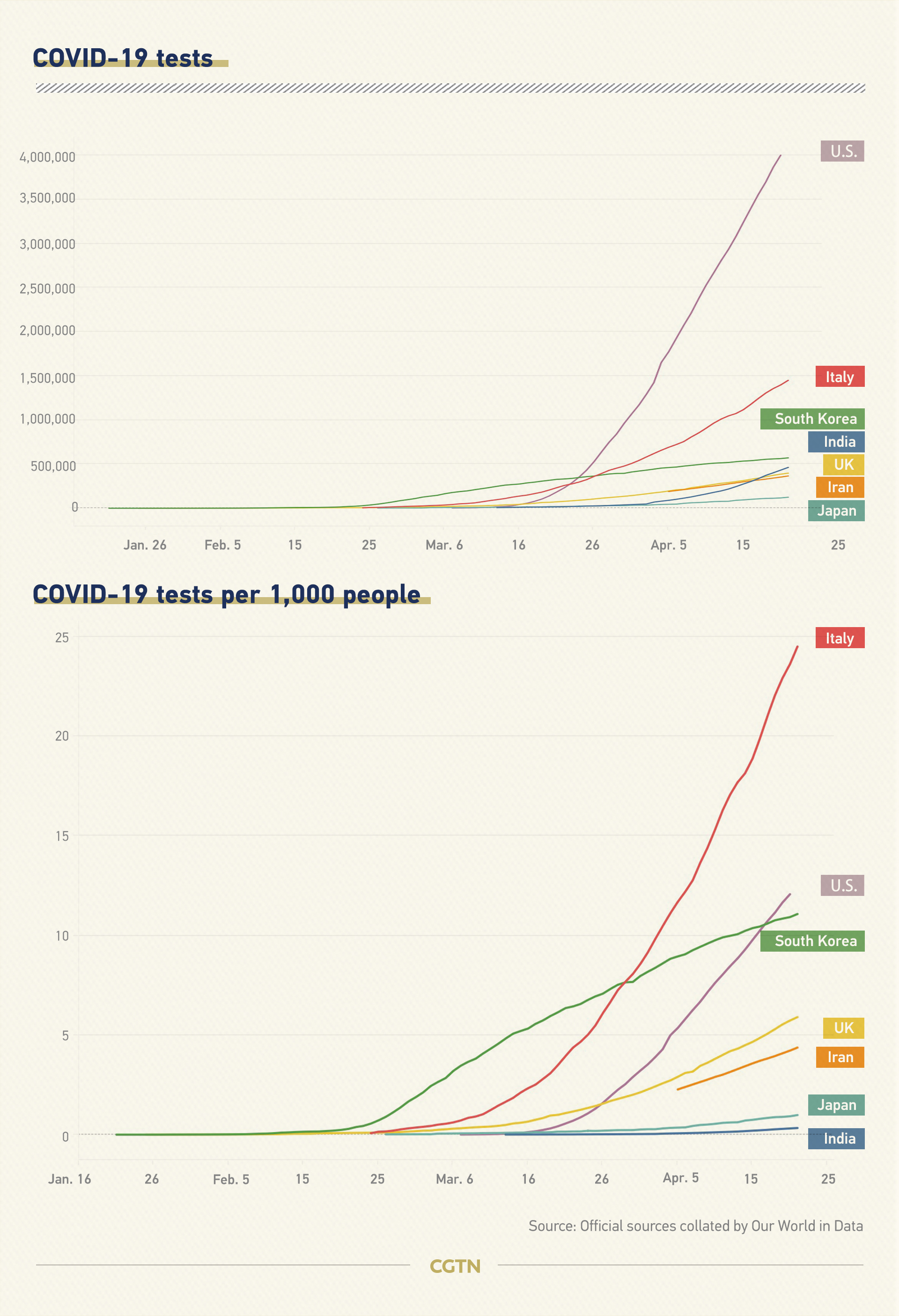 Other countries like the United States suffered the consequences of a lack of testing in the early stage.

U.S. Vice President Mike Pence acknowledged there was a shortfall in the number of testing kits required to meet demand on March 5, when he was leading the administration's response to the coronavirus crisis. One day later, President Donald Trump stated that "anybody who wants a test will get a test" while touring the CDC facilities. The figure on March 7 showed the U.S. only performed 2,389 tests with more than 400 confirmed cases.