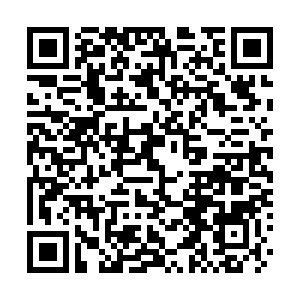 The White House rebuked the top U.S. health agency on Sunday, saying "it let the country down" on providing testing crucial to the battle against the coronavirus outbreak.

The Centers for Disease Control and Prevention (CDC) has been under intense scrutiny since producing a faulty test for COVID-19 that caused weeks of delays in the U.S. response.

Critics have pointed out that it could simply have accepted kits made by the World Health Organization, which has been producing them since late January, instead of insisting on developing its own test kits.

"Early on in this crisis, the CDC, which really had the most trusted brand around the world in this space, really let the country down with the testing," White House trade advisor Peter Navarro told NBC's "Meet the Press."

"Because not only did they keep the testing within the bureaucracy, they had a bad test. And that did set us back."

The Food and Drug Administration has also criticized the CDC for not following its own protocols in manufacturing COVID-19 test kits. The errors were not corrected until late February.

Trump often blames the administration of his predecessor, Barack Obama, for passing on "broken tests" for the new coronavirus – although Obama left office years before the virus came into existence.

But Navarro's comments mark the strongest criticism by a named White House official of the CDC's role in the administration's slow rollout of testing. 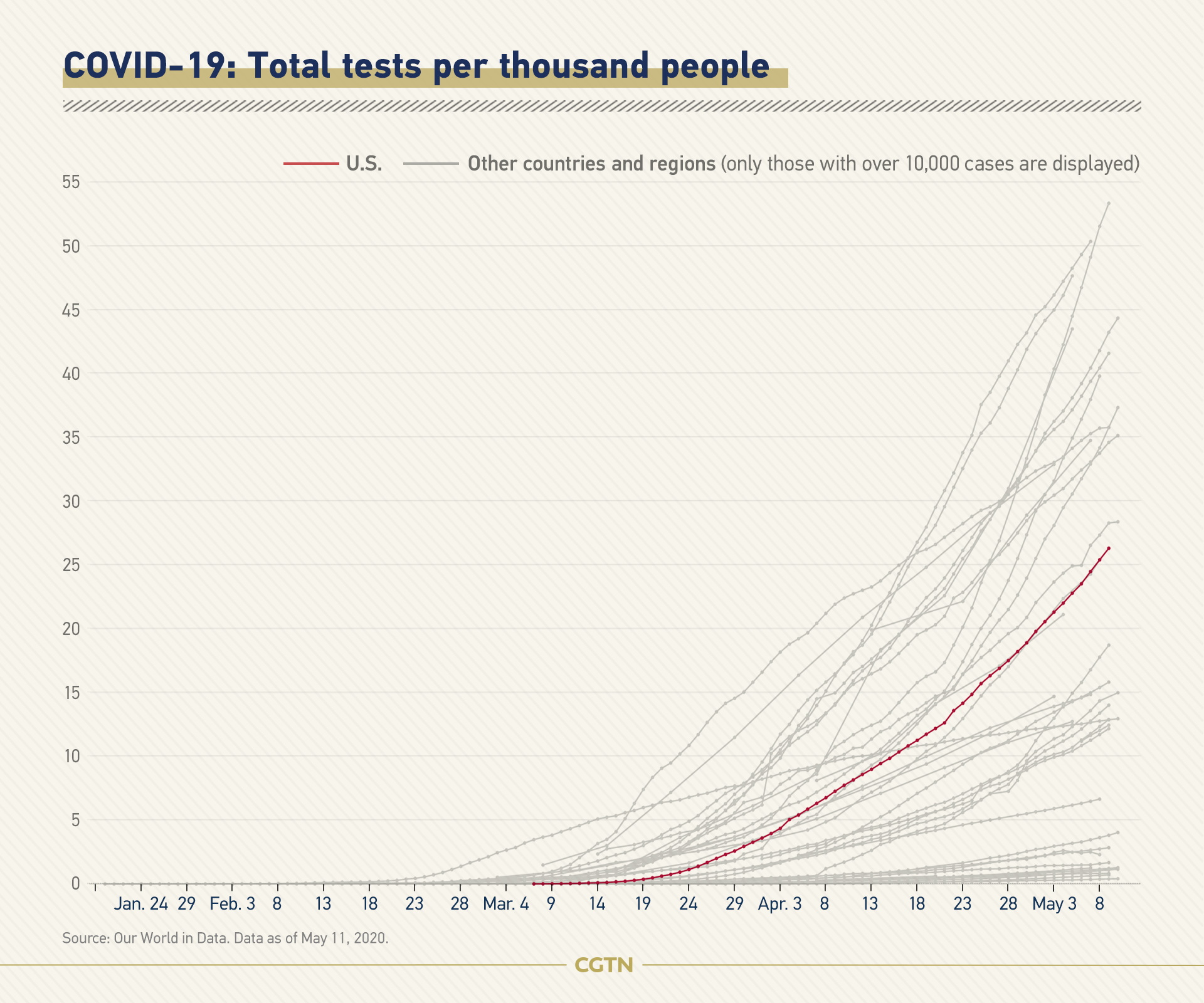 Health and Human Services Secretary Alex Azar defended the CDC against Navarro's criticism, telling CBS it was never meant to be "the backbone of testing, of broad, mass testing, in the United States."

"I don't believe the CDC let this country down. I believe the CDC serves an important public health role. And what was always critical was to get the private sector to the table," he said on "Face the Nation."

An editorial in the respected medical journal The Lancet also came to the agency's defense. "There is no doubt that the CDC has made mistakes, especially on testing in the early stages of the pandemic... But punishing the agency by marginalizing and hobbling it is not the solution," it said.

"A strong CDC is needed to respond to public health threats, both domestic and international," it read.

The United States has the world's largest coronavirus outbreak by far, with more than 89,000 deaths among nearly 1.5 million confirmed cases, according to data from Johns Hopkins University. 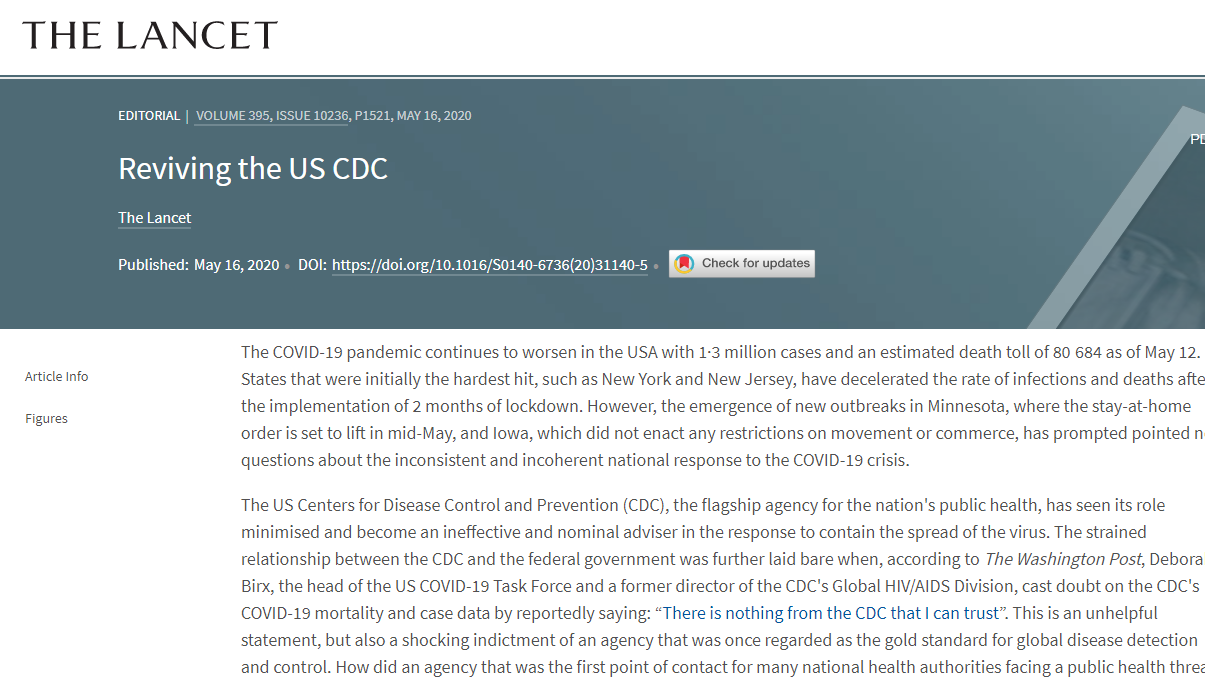 On March 6, Trump said as he toured the CDC headquarters in Atlanta that 4 million "beautiful" testing kits would be available within a week and that "anybody that needs a test gets a test."

More than two months later, just 12 million Americans have been tested – less than 4 percent of the population.

That places it 39th in the world behind other hard-hit countries like Russia, Italy and Spain, according to trusted online statistics source Worldometer.

CDC director: Some COVID-19 deaths misdiagnosed as influenza in the U.S.

The CDC tracks 12 different forecasting models of possible COVID-19 deaths in the U.S. As of May 11, all forecast an increase in deaths in the coming weeks and a cumulative total exceeding 100,000 by June 1, according to CDC Director Robert Redfield.

Earlier on Wednesday, Redfield openly admitted that some COVID-19 deaths in the U.S. have been misdiagnosed as influenza, when asked about the current severe shortage of detection agents for the novel coronavirus in the country.

Experts say widespread testing – of healthy people as well as those with symptoms – is crucial as a means of knowing exactly where the virus is spreading as the U.S. begins reopening the world's biggest economy.

In New York, the hardest-hit part of the U.S., Governor Andrew Cuomo took a virus test on live television Sunday in a bid to encourage more widespread testing and pave the way for a safer reopening of the populous state.

Navarro, echoing a claim made frequently by the president, said that locking down the country until the outbreak was over would kill "a lot more people" through suicides, drug abuse and a halt on medical procedures than the virus itself.

He accused China of crippling the U.S. economy "in 30 days," but vowed that Trump would rebuild it as the country reopened.