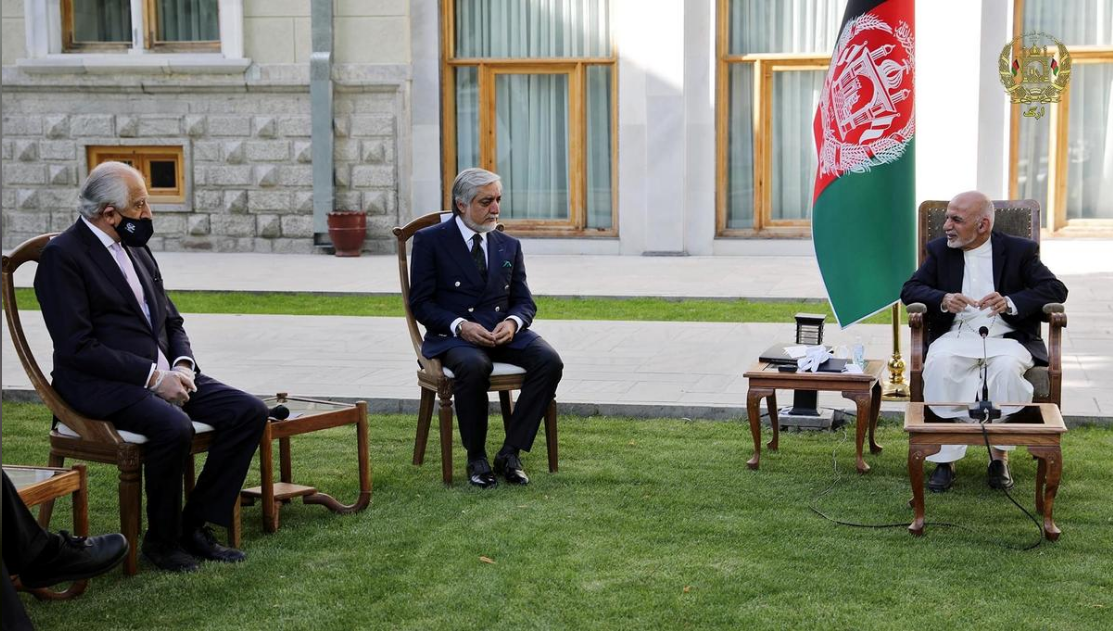 The leader of the Taliban said on Wednesday that his group was committed to a landmark deal with the U.S., despite being accused of carrying out hundreds of attacks in Afghanistan since it was signed in February.

Haibatullah Akhunzada urged Washington "not to waste" the opportunity to end the longest war the U.S. has involved in, during a speech released ahead of Eid al-Fitr holiday, which marks the end of Ramadan.

"I urge American officials to not afford anyone the opportunity to obstruct, delay and ultimately derail this internationally recognized bilateral agreement," the reclusive leader said.

Zalmay Khalilzad, the U.S. envoy who brokered the deal, said he heard a similar "commitment to the agreement" as he met with the Taliban's chief negotiator Mullah Baradar in Qatar.

"On violence, I told the Talibs violence by all sides must fall. Innocent Afghans have borne far too much and for too long the costs of this war," he wrote on Twitter.

Khalilzad, however, has earlier said that Taliban attacks on Afghan government forces outside of cities do not violate the agreement under which U.S. troops are withdrawing.

Khalilzad on Wednesday also met Afghan President Ashraf Ghani and his former rival Abdullah Abdullah, to discuss progress towards a peace deal with the insurgent Taliban.

He later twitted about the achievement of the meeting, congratulated President Ashraf Ghani and Chairman of the High Council for National Reconciliation Abdullah Abdullah for forming "an inclusive government after protracted negotiations."

He also said the meeting reached the agreement "on the importance of delivering (and soon) on other commitments made in the U.S.-Taliban agreement and U.S.-Afghanistan joint declaration." 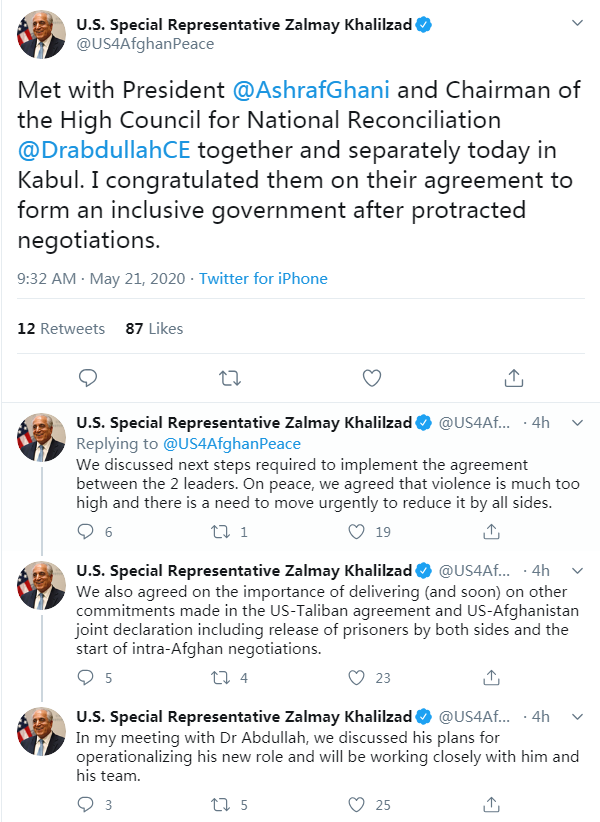 The meeting was the first between the three men since Ghani and Abdullah ended a months-long political impasse in which both claimed to be Afghanistan's rightful leader.

The pair struck a power-sharing agreement on Sunday, removing a major obstacle to the U.S.-brokered peace process and in which Abdullah was appointed head of a reconciliation council designated to hold talks with the Taliban.

Ghani said that during his meeting with Khalilzad, shortly before the three men met, they had discussed a ceasefire with the Taliban.

"Both sides talked about the upcoming steps for the peace process and both sides stressed the issue of a ceasefire before the start of the inter-Afghan talks," Ghani's statement said, adding they discussed how to continue with a prisoner swap that the Taliban had demanded before beginning talks.

His statement made no mention of a 1 billion U.S. dollars aid cut the United States announced in March when Abdullah and Ghani failed to strike a deal and which officials have asked be reinstated.

Khalilzad is in the region to escalate efforts to bring the Afghan government and the Taliban to the negotiating table after months of delays.

The Taliban has increased violence even after a February 29 U.S.-Taliban pact on the withdrawal of U.S.-led foreign forces in exchange for Taliban security guarantees.

On Wednesday the Taliban's leader Haibatullah Akhundzada released a statement marking the Islamic celebration of Eid, calling for progress on the peace deal but also asking its fighters to stay "focused on their objectives" and "consolidate... ranks," which government security officials criticized as inciting violence.