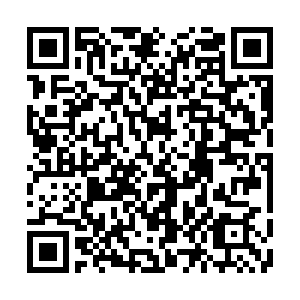 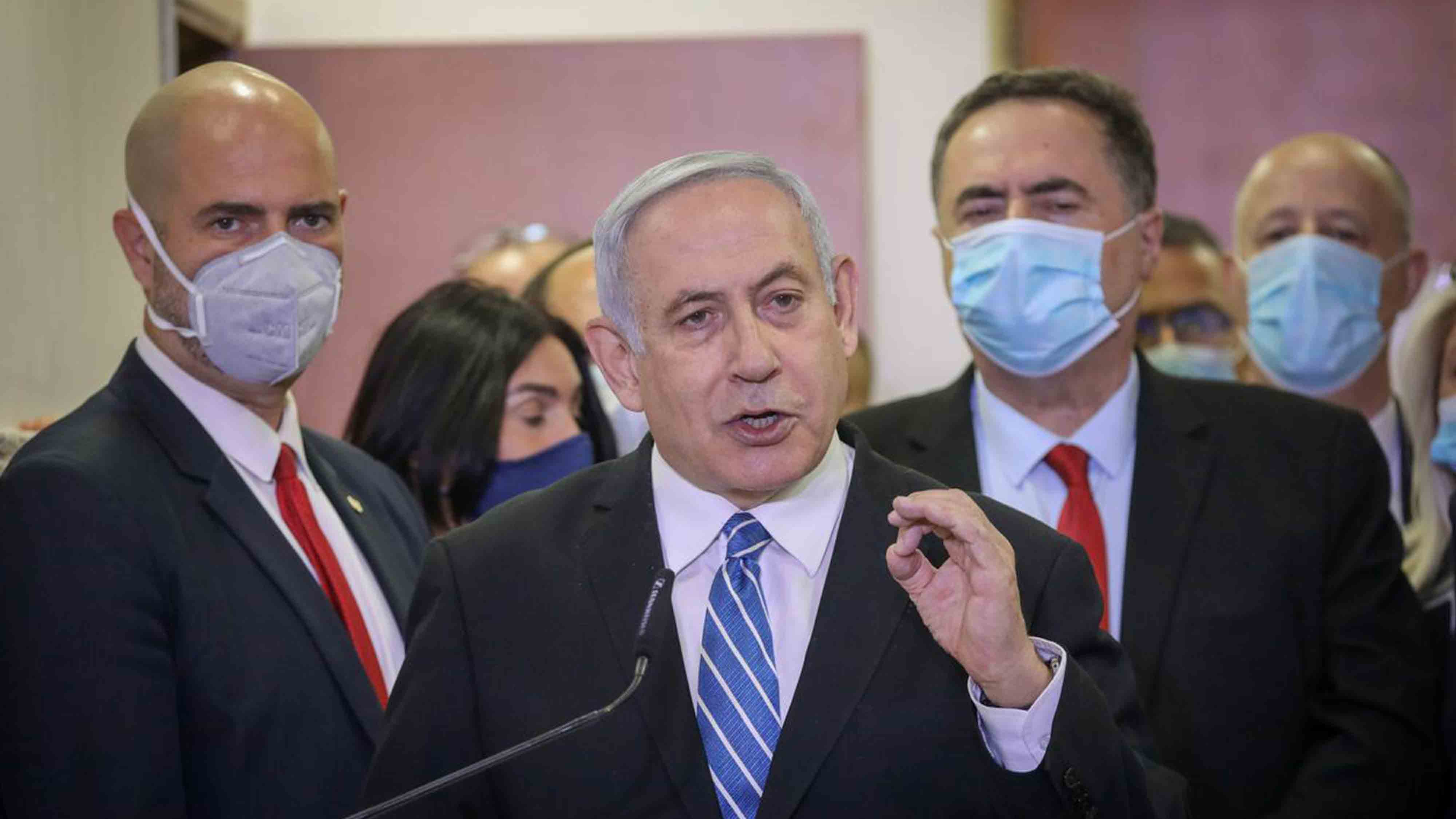 Israeli Prime Minister Benjamin Netanyahu arrived at the courthouse for the start of a corruption trial on Sunday in a Jerusalem court, where he will become the first serving Israeli prime minister to face criminal prosecution in a case he calls a political witch hunt.

Flanked by a clutch of cabinet ministers from his right-wing Likud party, Netanyahu appealed to public opinion, taking off his mask to address television cameras in the courthouse hallway.

"These investigations were tainted and stitched-up from the first moment," Netanyahu said. "I am appearing here today, as your prime minister, standing tall and with head high," he said.

In the courtroom, Netanyahu and the judges wore face masks because of the coronavirus crisis. One of the judges asked Netanyahu whether he had read and understood the indictment. He replied: "Yes, your Honor."

"I read the indictment and I understand its content," Netanyahu said.

The hearing only lasted an hour as it was mostly procedural. The court excused Netanyahu from appearing in person at the next hearing, set for July 19. Israeli analysts say the trial could last months or even years.

Netanyahu, wearing a face mask, stands next to his lawyers inside the courtroom as his corruption trial opens at the Jerusalem District Court, May 24, 2020. /Reuters

Netanyahu, wearing a face mask, stands next to his lawyers inside the courtroom as his corruption trial opens at the Jerusalem District Court, May 24, 2020. /Reuters

Netanyahu is required to appear for the session in Jerusalem District Court, a week after he was sworn in to a record fifth term as head of a unity government, ending more than a year of political deadlock in the wake of three inconclusive elections. A three-judge panel will hear his case.

He was indicted in November on charges of bribery, fraud and breach of trust in three cases involving gifts from millionaire friends and for allegedly seeking regulatory favors for media tycoons in return for favorable coverage.

Netanyahu, who heads the right-wing Likud party, has cast his prosecution as a leftist witch-hunt meant to oust a popular right-wing leader.

As prime minister, Netanyahu is under no legal obligation to resign and has said his court battle will not affect his ability to do his job.

Some 250 pro-Netanyahu demonstrators are protesting in front of the District Court in Jerusalem. They were heard singing "Bibi King of Israel!", "Messiah! Messiah!" and shouting "This is a charge sheet against all of us."

Meanwhile, some 200 members of the pro-democracy Black Flag group demonstrated in front of the prime minister's residence on Balfour Street in Jerusalem.

The Black Flags movement said in a statement that "The unrestrained attack on the judicial system is the reason we are raising black flags throughout the country. A man charged with criminal offenses isn't our prime minister. A defendant, who incites against justice and law enforcement, as well as against half of the country, isn't our prime minister. We'll continue fighting until the State of Israel gets back on track. 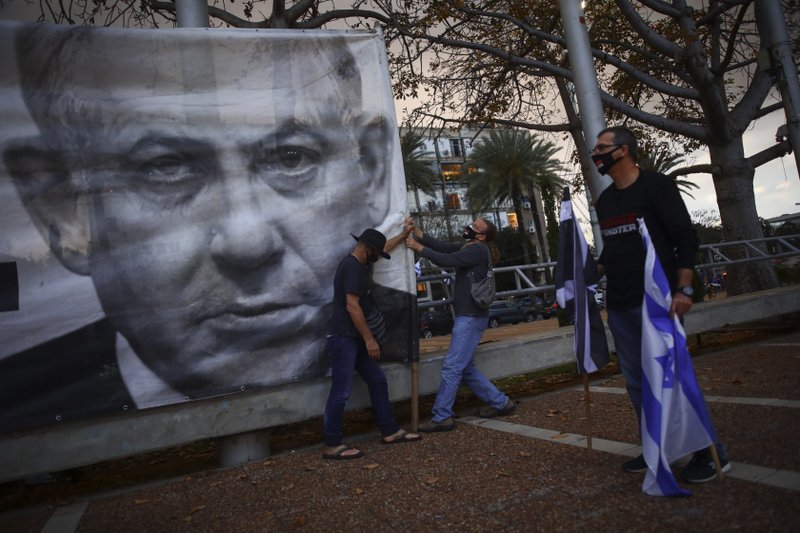 What are the charges against Netanyahu?

In return, prosecutors say, he sought positive coverage of himself and his wife on a news website controlled by the company's former chairman, Shaul Elovitch.

CASE 1000, in which Netanyahu has been charged with fraud and breach of trust, centers on allegations that he and wife Sara wrongfully received almost 700,000 shekels worth of gifts from Arnon Milchan, a Hollywood producer and Israeli citizen, and Australian billionaire businessman James Packer.

Prosecutors said gifts included champagne and cigars and that Netanyahu helped Milchan with his business interests. Neither Packer nor Milchan face charges.

CASE 2000 alleges that Netanyahu negotiated a deal with Arnon Mozes, owner of Israeli newspaper Yedioth Ahronoth, for better coverage. In return, the prime minister allegedly offered legislation that would slow the growth of a rival newspaper. Netanyahu has been charged with fraud and breach of trust. Mozes has been charged with offering a bribe, and denies wrongdoing.

Netanyahu arrives for a speech at his Jerusalem office in Israel, regarding the new measures that will be taken to fight the coronavirus, March 14, 2020. /Reuters

Netanyahu arrives for a speech at his Jerusalem office in Israel, regarding the new measures that will be taken to fight the coronavirus, March 14, 2020. /Reuters

Will a verdict come soon?

Unlikely. The trial could take years. Netanyahu could also seek a plea deal rather than go through the trial process.

Some critics said Netanyahu was trying to avoid the optics of a prime minister sitting in the defendant's dock.

Netanyahu's lawyer had argued that his attendance, to hear the formal reading of the charges against him and confirm that he has read and understood them, was merely technical.

But the court rejected the request on Wednesday, saying it was important for justice to be seen to be done.

Yuval Shany, law professor at the Hebrew University of Jerusalem, argued that there is "a basic incompatibility" between Netanyahu's role as head of the government and his status as a criminal defendant.

In the latter role, Shany said, the premier will be "fighting very aggressively and maybe effectively to weaken the government authorities that are prosecuting him."

"There is a very serious conflict of interest situation," he said.

Once the trial is under way, the three judges selected by the Supreme Court will be able to demand Netanyahu's presence in court when they consider it necessary.

Six years ago, former Prime Minister Ehud Olmert was found guilty of bribe-taking and served 16 months in jail. His trial took place after his 2006-2009 term in office.