The China-U.S. saga: Where are we heading toward? Part I
First Voice 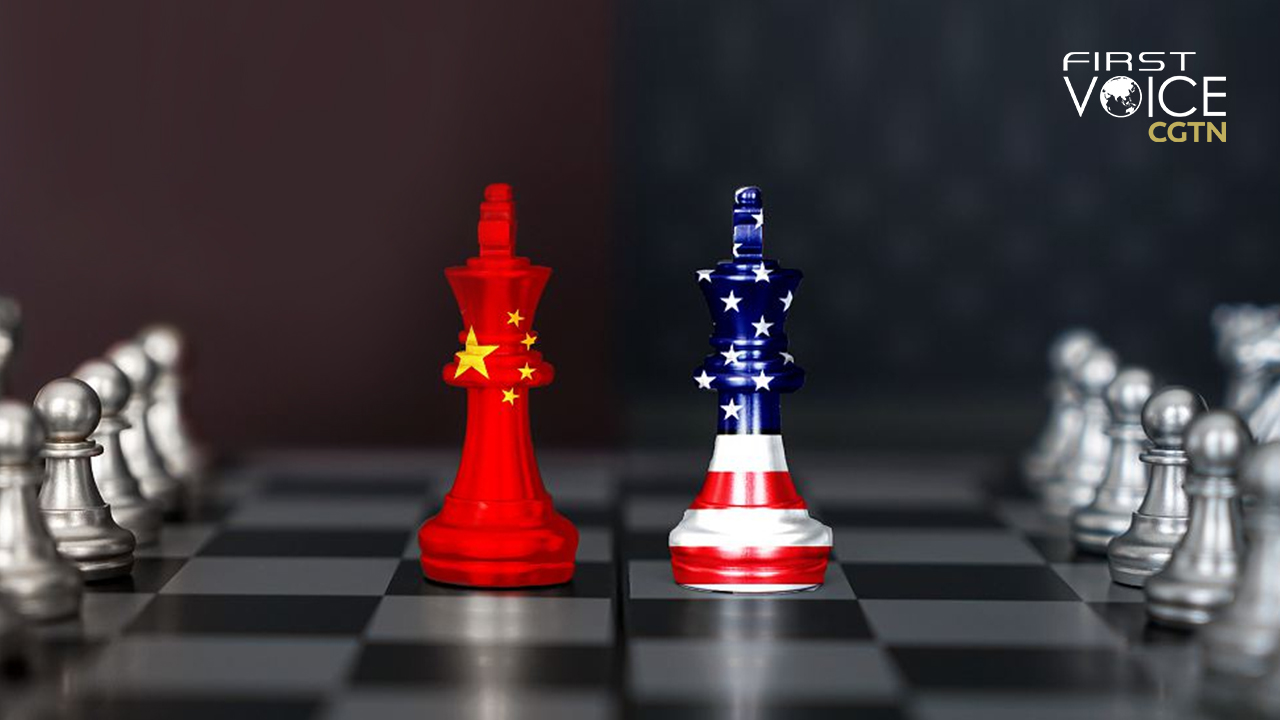 Editor's note: On May 29, U.S. President Donald Trump held a press conference at the White House, laying out his administration's aggressive China policy. This is part I of CGTN First Voice's analysis of the policy he proposed. CGTN's First Voice provides instant commentary on breaking stories. The daily column clarifies emerging issues and better defines the news agenda, offering a Chinese perspective on the latest global events.

Ten minutes in the afternoon of May 29 may have shaped the course of the most important relationship in the 21st century for the foreseeable future. Besieged by the rising COVID-19 death toll and a riled population in the wake of George Floyd's death, U.S. President Donald Trump was uncharacteristically focused on the topic he intended – China.

From positions in international organizations to domestic policies, from economy to education, Trump launched an all-encompassing tirade against the country he viewed as a "strategic competitor" and who had "ripped off the United States as no one has ever done before." Ali Wyne, a nonresident senior fellow at the Atlantic Council, characterized the current status of the relationship as "unrestrained hostility".

So, where are we headed? Do Trump's criticisms and attacks hold any water?

Trump's statement of withdrawing U.S. membership from WHO has already met with bipartisan rebuke. Nancy Pelosi, Speaker of the U.S. House of Representatives, called the decision "an act of extraordinary senselessness". "Again and again, he blames others and refuses to take responsibility," the Speaker said. Lamar Alexander, the Republican senator and chairman of the Senate Health Committee, believes that "withdrawing the U.S. membership could, among other things, interfere with clinical trials that are essential to the development of vaccines, which citizens of the United States, as well as others in the world, need."

Besides oppositions from a heavyweight in both parties, there's also an ongoing discussion about the legality of such an action. U.S.' membership in the WHO is guaranteed by a joint congressional resolution. According to Jean Galbraith, an international law professor at the University of Pennsylvania Law School, there's no judicial precedent on whether the president has the power to declare a unilateral withdrawal under such conditions. Larry Gostin, director of O'Neill Institute for National and Global Health Law at Georgetown University, told NPR that such an action would be an "overreach of his constitutional powers". Gostin believes that the president would need congressional approval to pull U.S. from any of UN agencies.

Former health officials also expressed disagreement with the president. Dr. Tom Frieden, former director of the U.S. Centers for Disease Control and Prevention, said in an interview that a unilateral withdrawal means turning U.S.' back on the world: "That makes us less safe, it makes the world less safe."

With the president's power contested and the political and public health ramification in doubt, whether Trump's declaration would become a reality is still wait to be seen. The bipartisan rebuke, a rarity in the Trump era, could itself be a bulwark against U.S. withdrawal. The fate of one of the most important international organizations is still not decided. 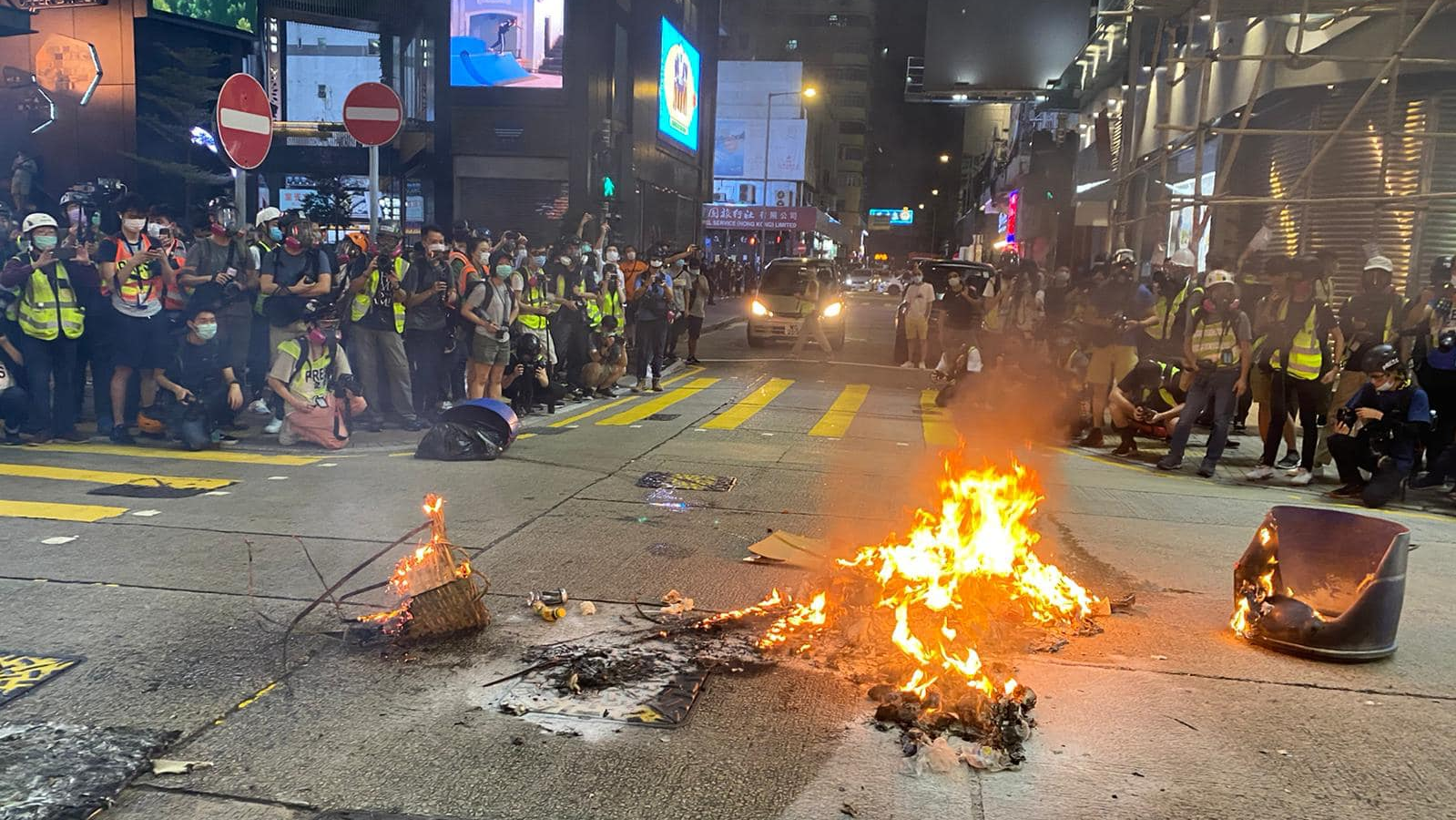 Violent protesters have paralyzed Hong Kong for the later half of 2019, and the chaos seems to be resurfacing again. The picture shows protesters blocking roads in Mong Kok, Hong Kong, May 27, 2020. /Hong Kong police

Violent protesters have paralyzed Hong Kong for the later half of 2019, and the chaos seems to be resurfacing again. The picture shows protesters blocking roads in Mong Kok, Hong Kong, May 27, 2020. /Hong Kong police

Following through his Secretary of State's announcement about not recognizing Hong Kong as autonomous, Trump announced that he is going to "revoke Hong Kong's preferential treatment as a separate customs and travel territory from the rest of China." New York Times reported that American corporate executives and the U.S. Chamber of Commerce had cautioned Trump against taking such a move.

There are some who believe that such an act could have a devastating impact on the regional and global economy. However, there are also who sees the act as bravado without the ability to follow through. Chad Bown, senior fellow at the Peterson Institute for International Economics, told CNN that such an act "would have a very little immediate impact". He pointed out that, in 2019, the U.S. only imported less than 5 billion dollars' worth of goods from Hong Kong while U.S. exports to the Special Administration Region were over 30 billion dollars per year. Stripping the region of special status could potentially impact more of U.S.' economic wellbeing than others. As a president who appears to make "money" the centerpiece of his presidency, it is hard to see him not regretting if this scenario turns out to be the case.

Chen Jiahe, the chief investment officer at Novem Arcae Technologies, takes a similar view. "The three pillars of Hong Kong's economy – finance, tourism, and trade – are significantly dependent on Chinese mainland's development," Chen said in our interview. He said that Hong Kong's trade volume with the U.S. has been declining over the years while the volume with Southeast Asia and Europe increased, and the overall trade volume of the region has been increasing.

Besides Hong Kong, Trump has also ordered a probe into Chinese companies listed on U.S.' financial markets. "Business people like certainty," Chen stated. The U.S., obviously, is not necessarily the poster-child for "certainty" these days. "Companies from the Chinese mainland have been worried about getting listed in the U.S.," Chen said, "and that's why you can see Chinese mainland companies turning away from the U.S., instead seek getting listed in places like Hong Kong." He pointed out that JD.com and NetEase Inc, the e-commerce and internet giants in China, are planning on going public in Hong Kong next week.

Revoking Hong Kong's special treatment and ordering probes into Chinese companies seem to pack more of a punch against the United States rather than it is against China. U.S. economy has already dropped 5 percent in the first quarter. Does putting more hurt on itself the best choice at the moment, especially considering that Trump has been selling economy as his greatest political accomplishment in his reelection campaign?