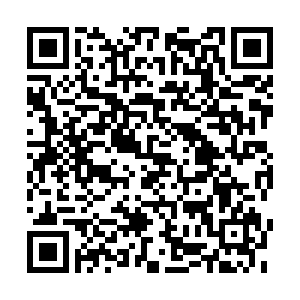 Editor's note: This is the 71st article in the COVID-19 Global Roundup series. Here is the previous one.

Worldwide confirmed cases of COVID-19 have passed the 6 million mark as countries wrap up their lockdown programs in order to reopen economies.

In the wake of growing calls for caution in easing restrictions, a top Italian doctor has offered an alternative view that challenged what many have been arguing.

The coronavirus is losing its potency and has become much less lethal, said Alberto Zangrillo, the head of the San Raffaele Hospital in Milan in the northern region of Lombardy, which has borne the brunt of Italy's coronavirus contagion. "In reality, the virus clinically no longer exists in Italy."

"The swabs that were performed over the last 10 days showed a viral load in quantitative terms that was absolutely infinitesimal compared to the ones carried out a month or two months ago," he told RAI television.

Zangrillo also said some experts were too alarmist about the prospect of a second wave of infections and politicians needed to take into account the new reality.

"We've got to get back to being a normal country," he said. "Someone has to take responsibility for terrorizing the country."

A second doctor from northern Italy told the national ANSA news agency that he was also seeing the coronavirus weaken. "The strength the virus had two months ago is not the same strength it has today," said Matteo Bassetti, head of the infectious diseases clinic at the San Martino hospital in the city of Genoa.

Italy has the third highest death toll in the world from COVID-19, with 33,415 people dying since the outbreak came to light in late February.

The Italian government urged caution, saying it was far too soon to claim victory.

"Pending scientific evidence to support the thesis that the virus has disappeared... I would invite those who say they are sure of it not to confuse Italians," Sandra Zampa, an undersecretary at the health ministry, said in a statement.

On Sunday, Pope Francis also waded in to offer his comments regarding the matter. At the first noon address from his window overlooking St. Peter's Square in three months as Italy's lockdown drew to an end, he said that people are more important than the economy. 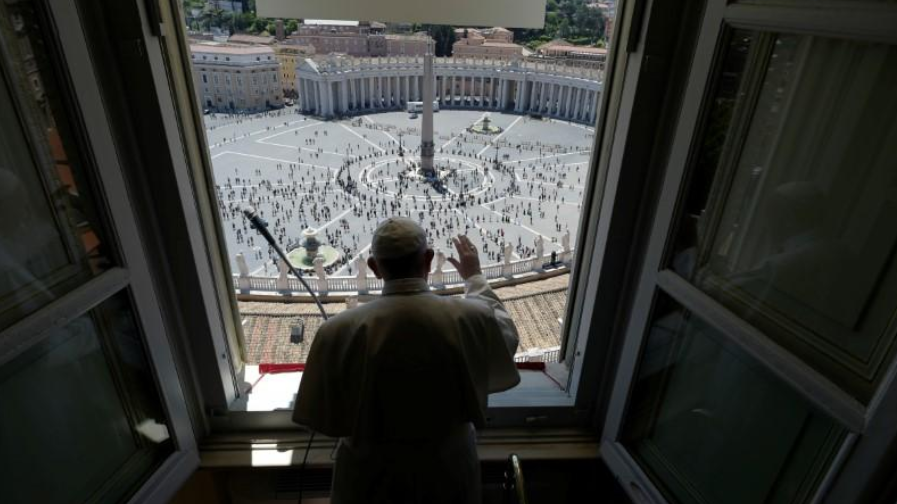 Pope Francis leads the Regina Coeli from his window in the newly reopened St. Peter's Square after months of closure due to the COVID-19 outbreak, at the Vatican, May 31, 2020. /Reuters

Pope Francis leads the Regina Coeli from his window in the newly reopened St. Peter's Square after months of closure due to the COVID-19 outbreak, at the Vatican, May 31, 2020. /Reuters

In the United States, where protests over the police killing of George Floyd have raged for a week, public officials throughout the country warned the risks of more coronavirus infections that could be triggered by these large gatherings.

Tim Walz, governor of Minnesota, urged demonstrators to wear masks and practice social distancing while warning that hospitals were "on the verge of being overrun."

"I'm concerned that we had mass gatherings on our streets when we just lifted a stay-at-home order and what that could mean for spikes in coronavirus cases later," Muriel Bowser, the mayor of Washington DC, said in a press conference on Sunday. 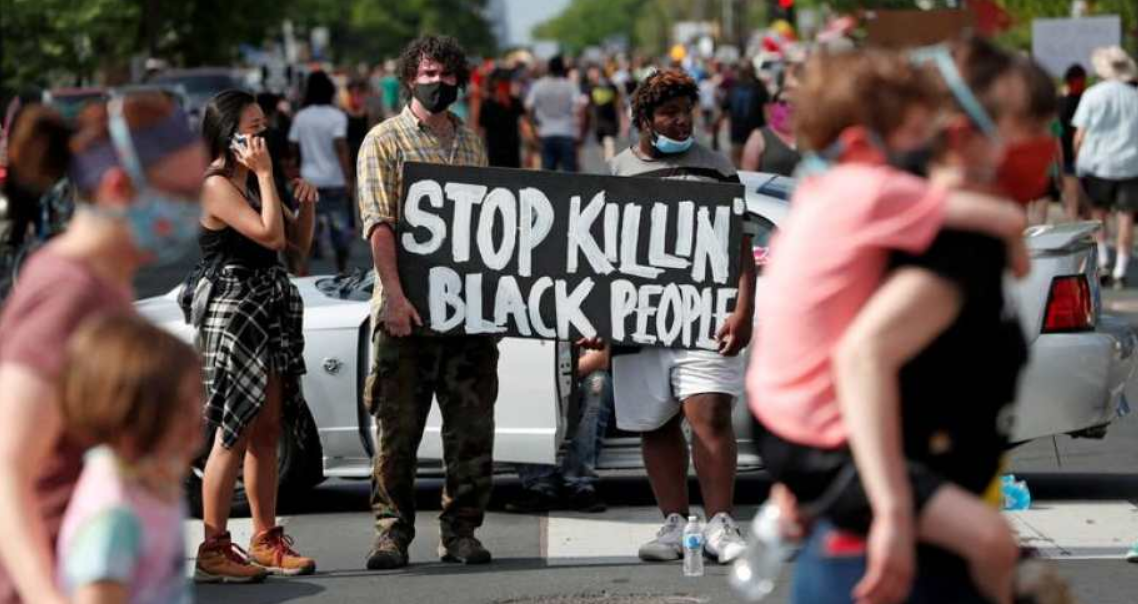 Some protesters wearing masks at demonstrations against the police killing of George Floyd. /Reuters

Some protesters wearing masks at demonstrations against the police killing of George Floyd. /Reuters

Meanwhile, testing centers in Los Angeles have been closed due to safety concerns amid the nationwide protests.

In addition to the coronavirus fears sparked by the raging protests, some also pointed out the role the epidemic has played in pushing people out in the streets to vent their anger.

"It's not a coincidence the unrest happens in the midst of a pandemic," New York Governor Andrew Cuomo said at his daily press briefing. "People have lost their jobs. They are isolated at home. People are stressed and worried. It is all of that."

In the UK, Prime Minister Boris Johnson has come under fire from some scientists for easing a lockdown put in place 10 weeks ago, with several saying it was a premature and risky move in the absence of a fully functioning system to track new outbreaks.

Foreign Minister Dominic Raab on Sunday defended the government's careful loosening of the coronavirus lockdown, saying it was the "right step to be taking" at this time.

Downing Street also said on Sunday that Britain has also reached its 200,000 capacity testing target for the coronavirus, including the means for 40,000 antibody tests a day.

Britain has one of the world's highest death rates from COVID-19 and the government says it is easing the stringent lockdown cautiously to balance the need to restart the economy while also trying to prevent another increase in the number of infections.

From Monday, up to six people will be able to meet outside in England, some school classes will restart, elite competitive sport can resume without spectators and more than 2 million people who have been "shielding" will be allowed to spend time outdoors.

Sweden, the country that has been criticized by some for its open approach to the virus, has not reported any coronavirus deaths in the last 24 hours, for the first time since March 13, the health authority said on Sunday, but there is typically a delay in reporting figures at weekends.

The country's response to the coronavirus is mostly based on voluntary social distancing and basic hygiene, a strategy that has been touted as a future model by the World Health Organization despite its controversy. 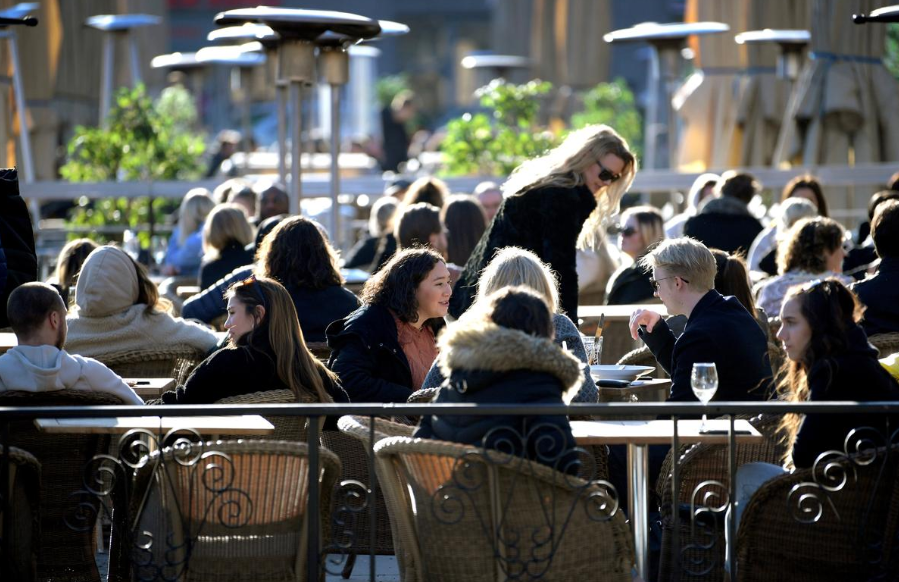 People enjoy the sun at an outdoor restaurant, despite the continuing spread of the COVID-19, in Stockholm, Sweden, March 26, 2020. /Reuters

People enjoy the sun at an outdoor restaurant, despite the continuing spread of the COVID-19, in Stockholm, Sweden, March 26, 2020. /Reuters

Data showed Sweden had the highest number of COVID-19 deaths in Europe per capita over a seven-day-period a week before the Sunday announcement.

The pandemic has killed more than 4,000 people in Sweden.

While many countries are convinced the time has come for relaxing coronavirus restrictions, some are acting with extra caution to minimize the ricks of virus resurgence.

Spain's Prime Minister Pedro Sanchez said on Sunday the country needed 15 more days of lockdown until June 21 "to finish with the pandemic once and for all," and he would ask parliament to approve a final two-week extension to the stay home rule.

"We have almost achieved what we set out to do," Sanchez told a press conference, as he expressed his intense relief that the number of new cases of COVID-19 in Spain, one of the nations hardest-hit by the virus, had fallen dramatically.

From June 21 a national state of emergency will end and with it the lockdown, allowing citizens to move freely in their regions. From July 1, citizens will be able to move throughout the country.

Despite opposition to the most recent lockdown extension from parties on the right and demonstrations across Spain, Sanchez has struck a deal with a Catalan separatist party Esquerra Republicana de Catalunya (ERC) which should guarantee his minority government secures enough support to extend the lockdown.

In a cautious move to check India's lifting of lockdowns, Indian officials said the country's states on Sunday began identifying high-risk zones where coronavirus lockdowns should continue while the rest of country gears up to reopen in June despite a record rise in COVID-19 cases.

Prime Minister Narendra Modi's government has extended lockdown until June 30 in so-called containment zones that should remain under lockdown because they continue to report a high number of infections.

But restaurants, malls and religious buildings are permitted to reopen elsewhere from June 8 as India loosens the world's longest lockdown to curb the spread of the pandemic.

South Africa, which is set to partly lift a two-month-old coronavirus lockdown on Monday, has pushed back the reopening of schools by a week. The education ministry said on Sunday a substantial number are not ready to welcome back pupils. 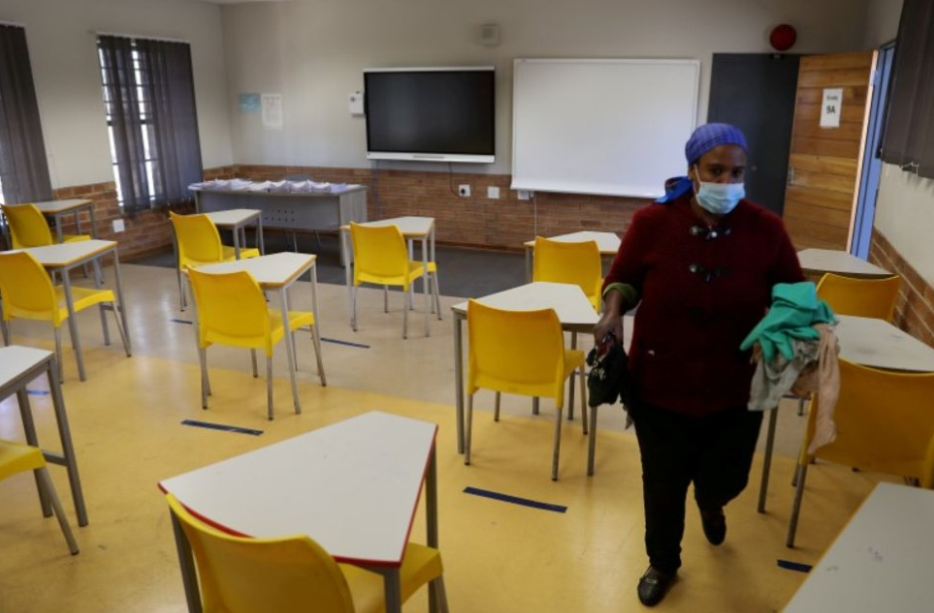 A worker walks past safely spaced desks following safe distancing measures amid the COVID-19 outbreak, at the Seshegong secondary school in Olivenhoutbosch, South Africa, May 28, 2020. /Reuters

A worker walks past safely spaced desks following safe distancing measures amid the COVID-19 outbreak, at the Seshegong secondary school in Olivenhoutbosch, South Africa, May 28, 2020. /Reuters

The plan for grades 7 and 12, the last years of primary and secondary school respectively, to return on Monday backfired after teachers' unions and governing associations urged school staff to defy the government order, saying schools did not have protective equipment (PPE) to keep educators and pupils safe.