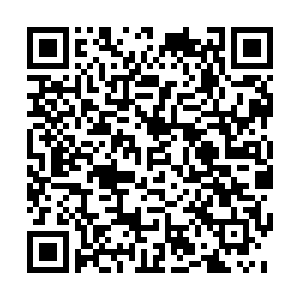 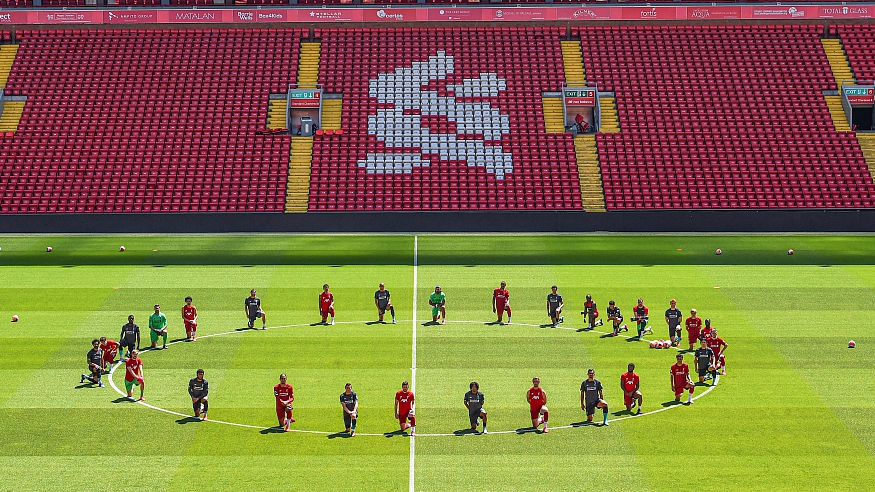 Borussia Dortmund star Jadon Sancho was shown a yellow card after he broke the on-pitch rules by removing his jersey during a Bundesliga game on Sunday. The 20-year-old did so to unveil an undershirt in tribute to George Floyd, the unarmed black American whose death in police custody has triggered mass demonstrations around the world.

Sancho's admirable expression of activism has sent out a powerful message and received positive reactions, but for all the audacity and boldness, it could also lead to further punishment from the football authority.

The German FA (DFB) announced on Monday that it will launch an investigation into the gestures made by Sancho and other three Bundesliga players to see if they broke laws that prohibit players from displaying "political, religious or personal slogans."

Apart from Sancho, Dortmund defender Achraf Hakimi, Schalke midfielder Weston McKennie, and Monchengladbach striker Marcus Thuram all mourned in their own way on the pitch to pay tribute to Floyd. 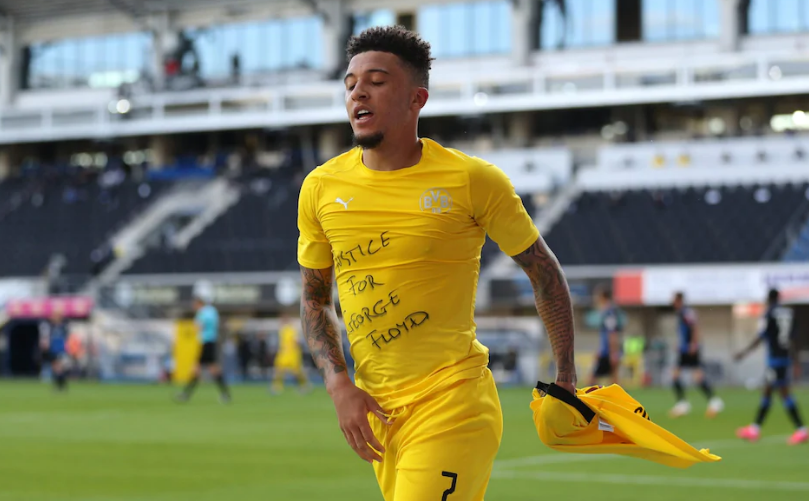 Jadon Sancho unveils a "Justice for George Floyd" message on his undershirt and earns a yellow card during their Bundesliga clash with Paderborn at Benteler Arena, Germany, May 31, 2020. /VCG

Jadon Sancho unveils a "Justice for George Floyd" message on his undershirt and earns a yellow card during their Bundesliga clash with Paderborn at Benteler Arena, Germany, May 31, 2020. /VCG

"Part of these examinations is to ascertain whether during matches and on the pitch are the right place for these actions," DFB vice president Rainer Koch explained.

"The game itself should remain free of political statements or messages of any kind ... There are of course opportunities before and after the match for these kinds of things," he added.

Under FIFA's Laws of the Game, players should "not reveal undergarments that show political, religious, personal slogans, statements or images, or advertising other than the manufacturer's logo."

It stated that "the team of a player whose basic compulsory equipment has political, religious or personal slogans, statements or images will be sanctioned by the competition organizer or by FIFA."

Late on Monday, FIFA released a statement confirming that it is up to competition organizers to decide whether to sanction players for protest messages.

"FIFA fully understands the depth of sentiment and concerns expressed by many footballers in light of the tragic circumstances of the George Floyd case," FIFA said.

"The application of the laws of the game is left for the competitions' organizers, which should use common sense and have in consideration the context surrounding the events," it added. 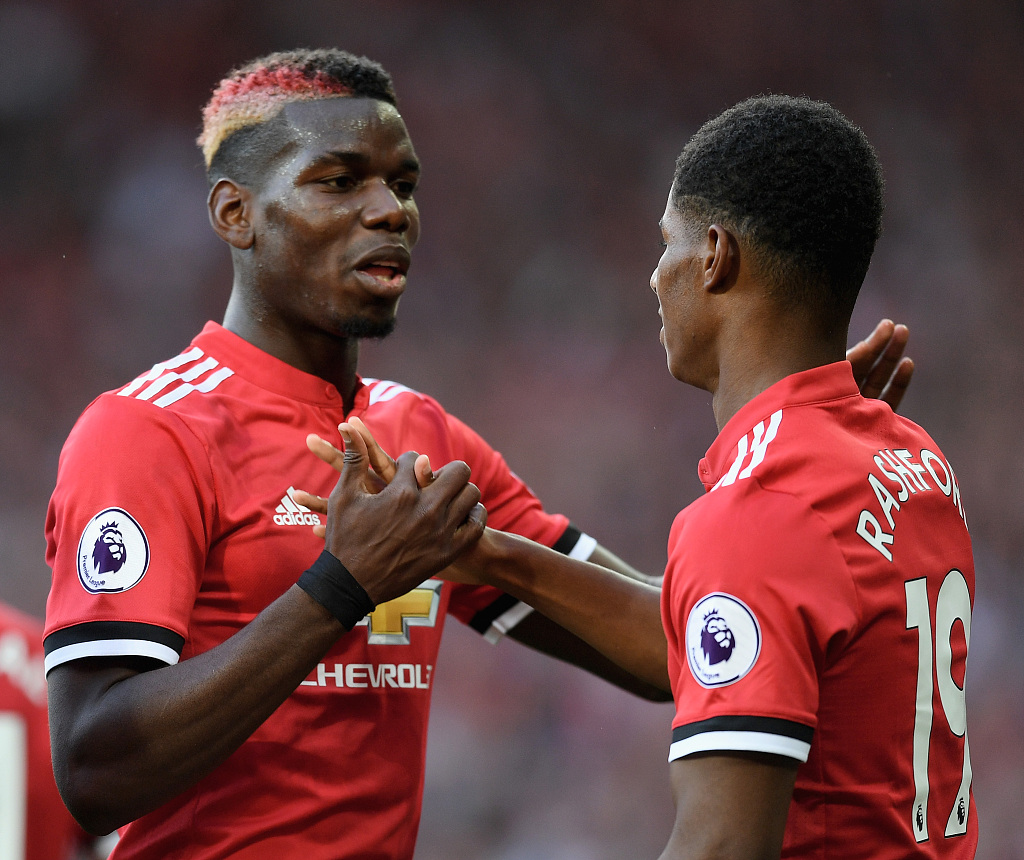 Manchester United stars Paul Pogba (L) and Marcus Rashford both express their anger about the death of George Floyd on social media. /VCG

Manchester United stars Paul Pogba (L) and Marcus Rashford both express their anger about the death of George Floyd on social media. /VCG

While Bundesliga players' expressions of protest are being investigated, more footballers have added their voices to the emotional protests against racism.

Manchester United star Paul Pogba said on his Instagram account: "During the past few days I have thought a lot about how to express my feelings about what happened in Minneapolis. I felt anger, pity, hatred, indignation, pain, sadness."

"Sadness for George and for all black people who suffer from racism EVERY DAY! Whether in football, at work, at school, ANYWHERE! This has to stop, once and for all! Not tomorrow or the next day, it has to end TODAY!" he added.

Pogba's teammate Marcus Rashford also joined the calls for change. "At a time [when] I've been asking people to come together, work together and be united, we appear more divided than ever. People are hurting and people need answers," the England forward wrote on twitter. "Black lives matter. Black culture matters. Black communities matter. We matter."

Former England captain David Beckham, one of the most recognizable names in world football, also weighed in. "My heart goes out to George's family and I stand in solidarity with the black community and millions of others across the world who are outraged by these events. It's heartbreaking to see that in 2020 this is still happening," he said on Instagram. 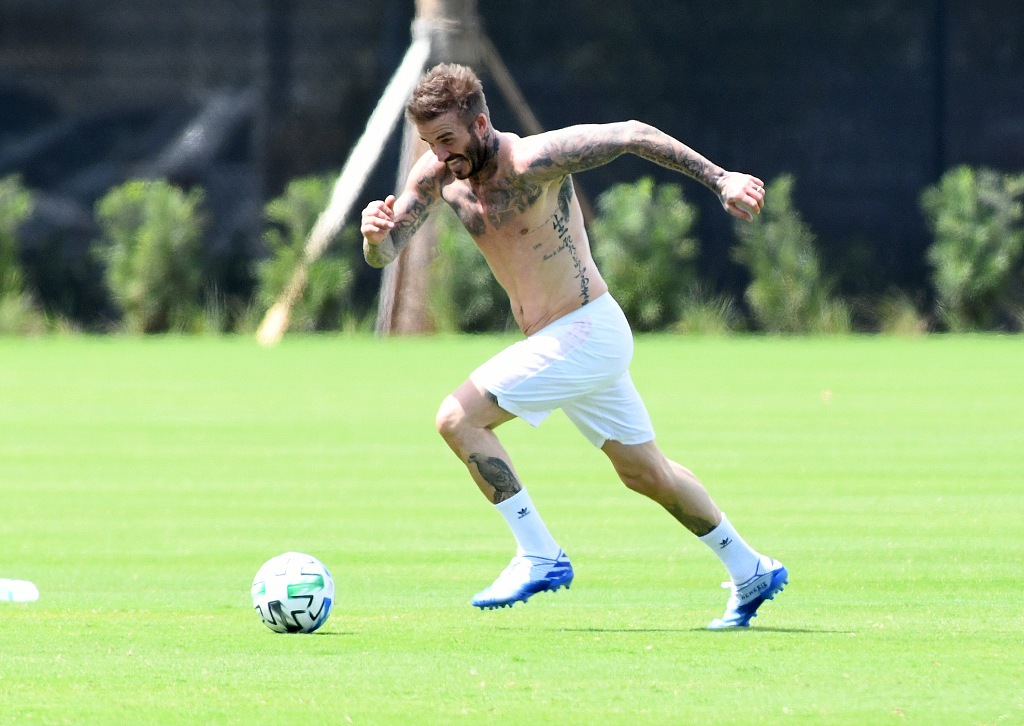 A shirtless David Beckham plays a football match with family and friends inside his empty MLS stadium, U.S., March 14, 2020. /VCG

A shirtless David Beckham plays a football match with family and friends inside his empty MLS stadium, U.S., March 14, 2020. /VCG

Premier League club Chelsea also declared that they stand with Floyd. "As a club we are committed to being a part of the solution, and we are joining our voice to all those calling for fairness, equality and meaningful change. Enough is enough. Together we are stronger," read a statement.

The comments came as a photo emerged on Monday that 29 Liverpool players went down on one knee around the center circle of the Anfield stadium to express solidarity with those protesting against Floyd's death.

The stunt echoed former NFL quarterback Colin Kaepernick, who first protested against racial injustice and police brutality by kneeling down during the U.S. national anthem in 2016. Since then, "take a knee" has become symbolic gesture in the "Black Lives Matter" movement.