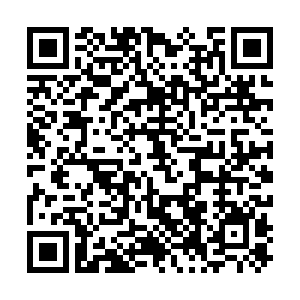 New polling suggests that in a deeply-divided United States, most Americans are united in their view of the killing of George Floyd but split over the protests his death sparked and dissatisfied with the response of U.S. President Donald Trump.

Floyd, a 46-year-old black man, died in police custody in Minneapolis on May 25 after a white police officer, Derek Chauvin, knelt on his neck for several minute as Floyd pleaded for his life and other officers watched on.

Watch: Clashes between police and protesters

Footage of Floyd's death, officially declared a homicide on Monday, has been watched by 76 percent of Democrats and 70 percent of Republicans, YouGov polling suggests. Protests over the latest police killing captured on video to rock the U.S. have now entered a seventh day amid serious civil unrest.

A large bipartisan majority of Americans say Chauvin, the police officer, was right to be charged with at least third degree murder for his involvement in Floyd's death, with over three in four saying he was obviously guilty of a crime.

YouGov polling suggests 95 percent of Democrats and 81 percent of Republicans believe the 44-year-old's third degree murder and manslaughter charges are appropriate or don't go far enough. Chauvin, who has a history of involvement in violent incidents, is scheduled to appear in court on June 8 and faces up to 25 years in jail if convicted. 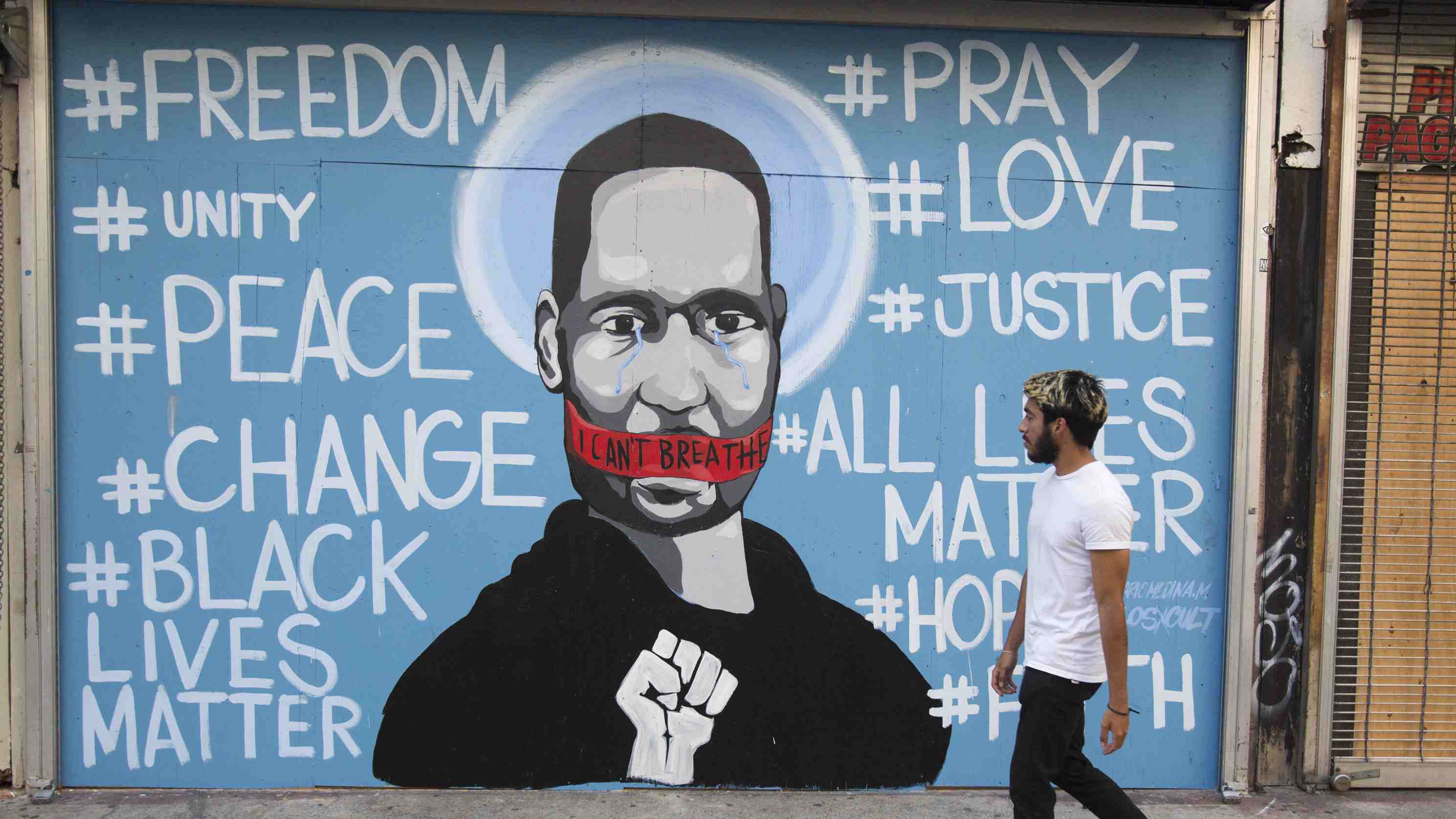 Four percent of Americans told YouGov Chauvin should not have been charged at all, and 77 percent said he was obviously guilty of a crime. The polling indicates a sharp divide between black and white Americans: 78 percent of black Americans say the charge is not serious enough, a sentiment shared by only 41 percent of white Americans.

Race was a major factor in Floyd's death, 61 percent of Americans told YouGov, with just 13 percent believing it was a minor factor and nine percent saying it was not a factor at all.

The other three officers present when Floyd died have been fired by the Minneapolis police department, a move supported by 79 percent of Democrats and 66 percent of Republicans according to YouGov, but despite growing pressure charges have not yet been filed against them.

On the ongoing protests…

A majority of Americans (54 percent) support the ongoing protests sparked by Floyd's death, a June 1 Morning Consult poll suggests, with only 14 percent strongly opposed. Support for the demonstrations is split along party lines, however, with 69 percent of Democrats and 39 percent of Republicans backing the rallies. 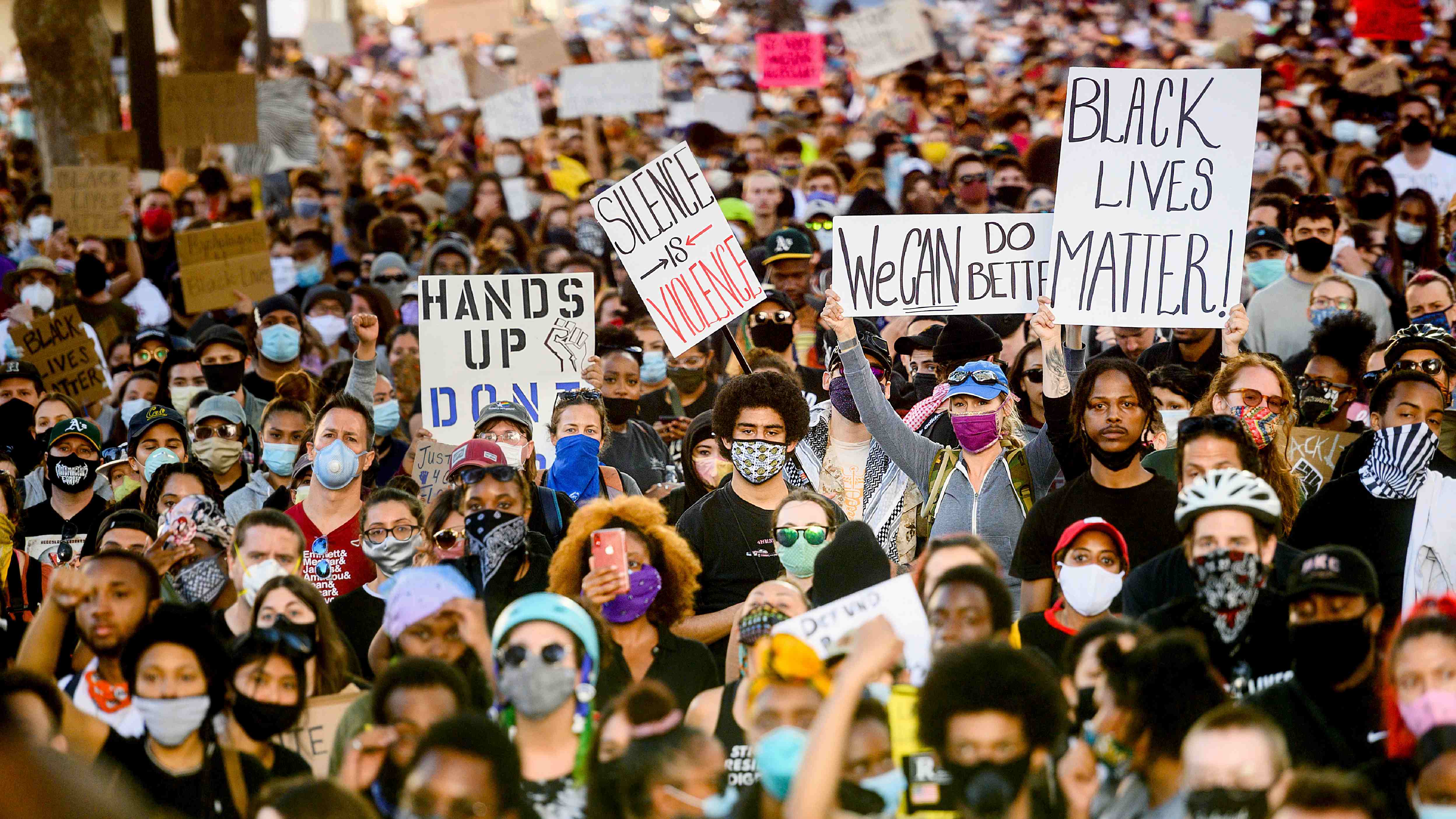 Americans are also divided over how to classify the protests. While the demonstrations across U.S. cities have often been largely peaceful, TV news coverage has been dominated by scenes of violence and clashes with police.

A majority (51 percent) of Americans view the protests in Minneapolis as "mostly violent riots," YouGov found, with just 10 percent regarding them as "mostly peaceful." However, while 42 percent of Democrats say the protests were a roughly equal mix of peaceful protests and violent riots, nearly three-quarters of Republicans (73 percent) describe them as violent riots.

On the police and racism…

Analysis by data scientist Samuel Sinyangwe for FiveThirtyEight found that the number of annual police killings has barely changed since 2013 – despite a 30 percent drop in urban areas over the period, killings in rural and suburban areas have increased.

Of those deaths, black Americans die in disproportionately high numbers. A study by the Proceedings of the National Academies of Sciences found that black males face the highest risk of being killed by police, at a rate of 96 out of 100,000 deaths against 39 per 100,000 deaths for white males.

YouGov found strong bipartisan support for police reform, with large majorities of Democrats and Republicans backing de-escalation training, use of body cameras and early warning systems to identify problematic officers. Chauvin, who had worked for the Minneapolis police department for 19 years, had been involved in numerous violent episodes during his career. 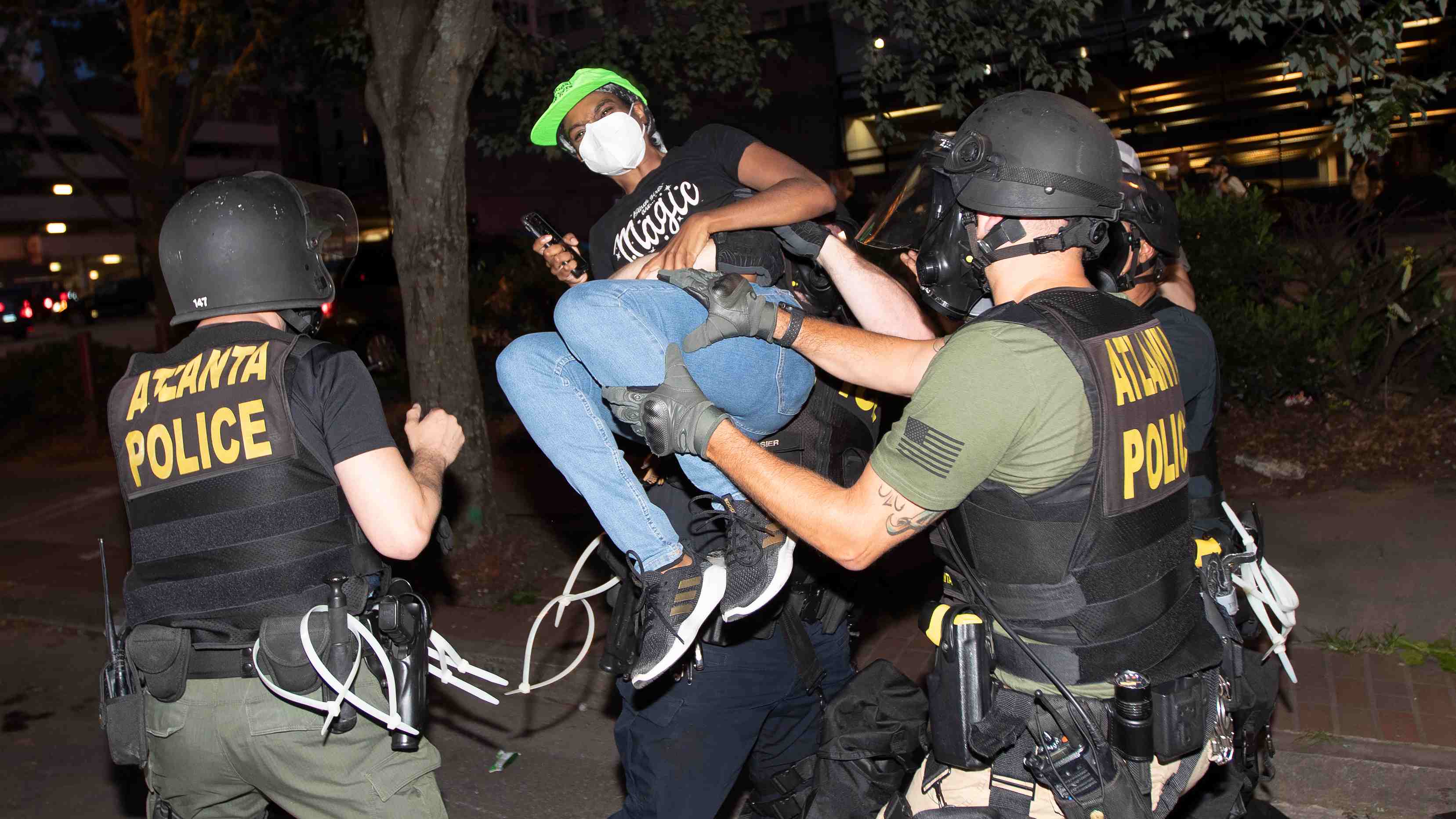 A protester is taken into custody by police during a demonstration over the death of George Floyd, Atlanta, June 1, 2020. /AP

A protester is taken into custody by police during a demonstration over the death of George Floyd, Atlanta, June 1, 2020. /AP

However, there are sharp party divides over perceptions of the police. Morning Consult found that roughly two-thirds of Republicans agreed that "if you abide by the law, the police will leave you alone, no matter your race or your ethnicity," an assertion two-thirds of Democrats disagreed with.

A YouGov survey of 40,000 Americans also revealed that the way white and black Americans view the police differs markedly.

Morning Consult found that 58 percent of Americans said they agreed that racial discrimination against black people "is one of the biggest problems facing America today."

Trump said on Monday evening that he would deploy the military to any city or state that "refuses to take the actions that are necessary to defend the life and property of their residents" as he continued to ramp up rhetoric against protesters and made a claim to be "your president of law and order." 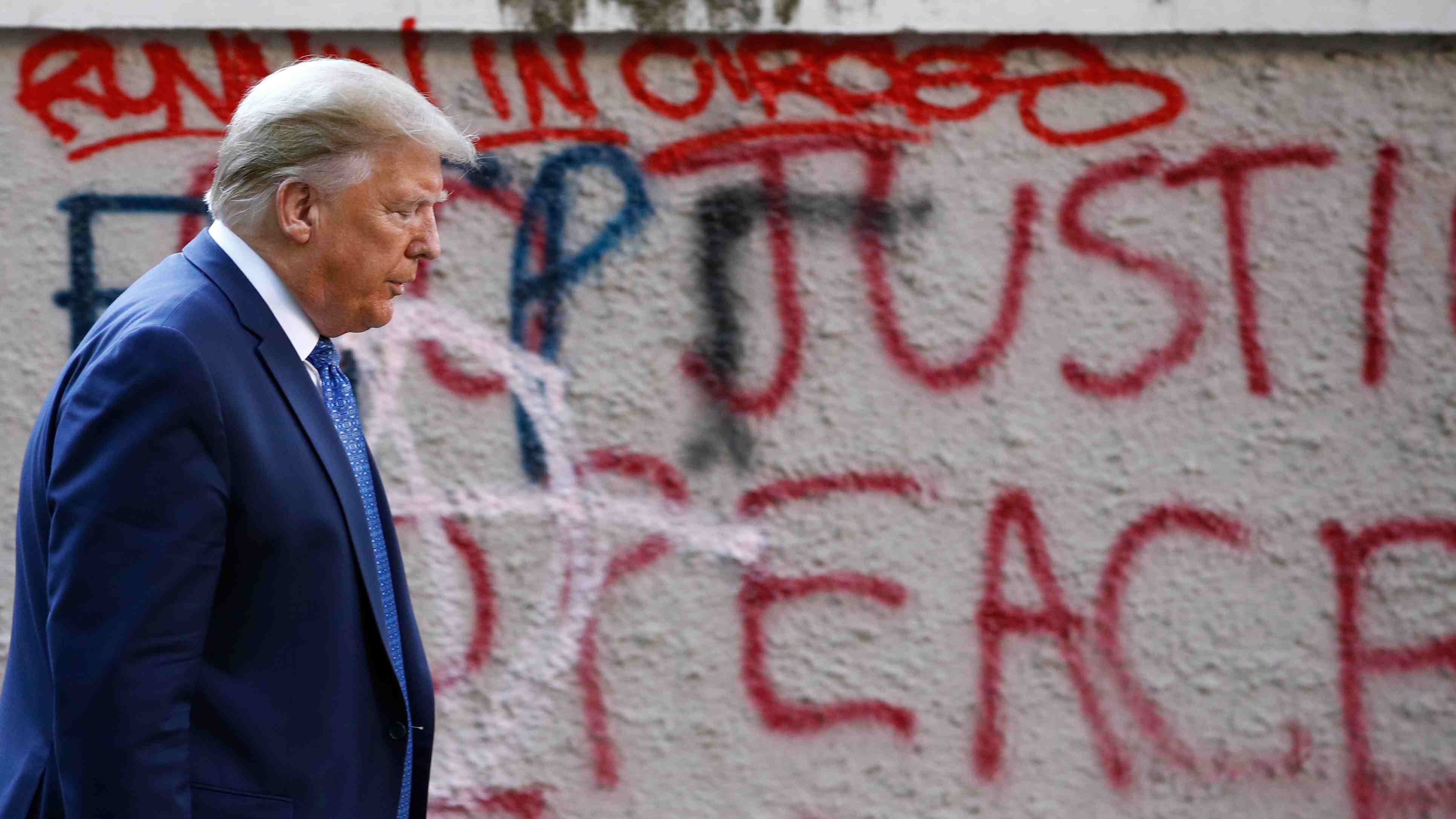 His warning, made in the White House Rose Garden after peaceful protesters nearby were disbursed with teargas, was viewed as inappropriate by 52 percent of Americans, a YouGov Direct instant poll suggests, with 41 percent saying it is appropriate.

Trump's response to the protests, which has included criticism of the killing of Floyd but nothing about police brutality or racial justice, is viewed positively by only 32 percent of voters overall, according to Morning Consult, and by just 14 percent of black voters.

The killing, protests and underlying issues have also been tested through the lens of electoral politics.

Presumptive Democratic presidential nominee Joe Biden, who has met protesters in Delaware and has voiced support for peaceful rallies, held a clear lead over Trump when Morning Consult asked which man they trust to tackle police reform (42-32) and racial inequality (47-30).

Biden's 17-point advantage on tackling racial inequalities includes large leads in key electoral demographics ahead of November's presidential poll: 10 points with voters aged over 64, 26 points among both college-educated white voters and suburban woman, and a huge 56 points among black voters.