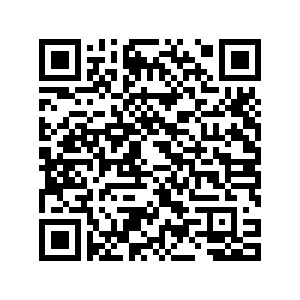 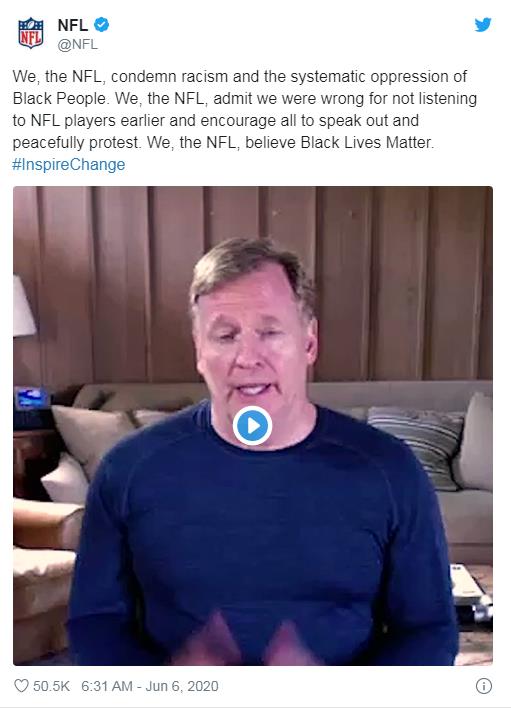 NFL commissioner Roger Goodell, via Twitter, encourages all to speak out and peacefully protest.

NFL commissioner Roger Goodell, via Twitter, encourages all to speak out and peacefully protest.

Roger Goodell, commissioner of the American National Football League (NFL), recently said the league was wrong for not listening to players fighting for racial equality and encouraged them to protest peacefully.

"It has been a difficult time for our country. In particular, black people in our country," Goodell said in a video released Friday. "First, my condolences to the families of George Floyd, Breonna Taylor, Ahmaud Arbery and all the families who have endured police brutality. We, the National Football League, condemn racism and the systematic oppression of black people.

"We, the NFL, admit we were wrong for not listening to NFL players earlier and encourage all to speak out and peacefully protest. We, the National Football League, believe Black Lives Matter. I personally protest with you and want to be part of the much-needed change in this country.

"Without black players, there would be no NFL. And the protests around the country are emblematic of the centuries of silence, inequality and oppression of black players, coaches, fans and staff. We are listening. I am listening, and I will be reaching out to players who have raised their voices and others on how we can improve and go forward for a better and more united NFL family." 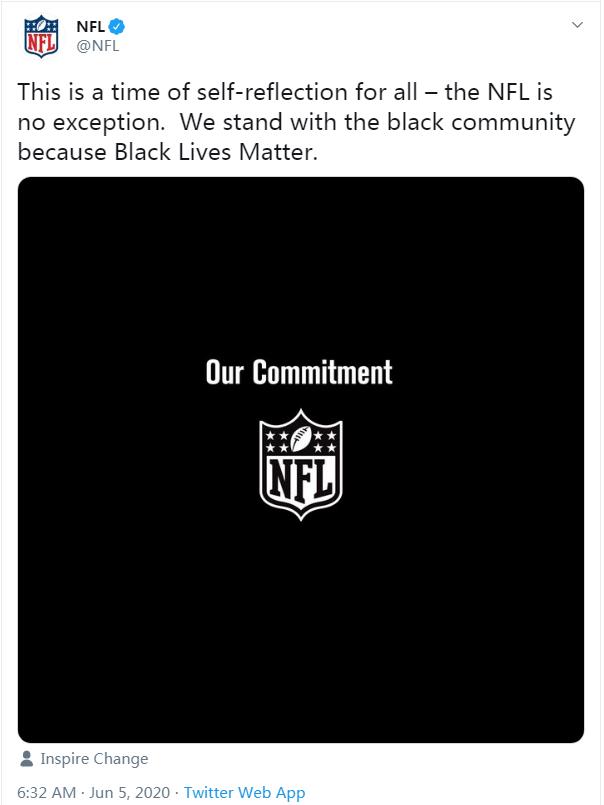 In a statement on June 5, the NFL said: "This is a time of self-reflection for all – the NFL is no exception. We stand with the black community because black lives matter.

"Through Inspire Change, the NFL, players and our partners have supported programs and initiatives throughout the country to address systemic racism. We will continue using our platform to challenge the injustice around us. 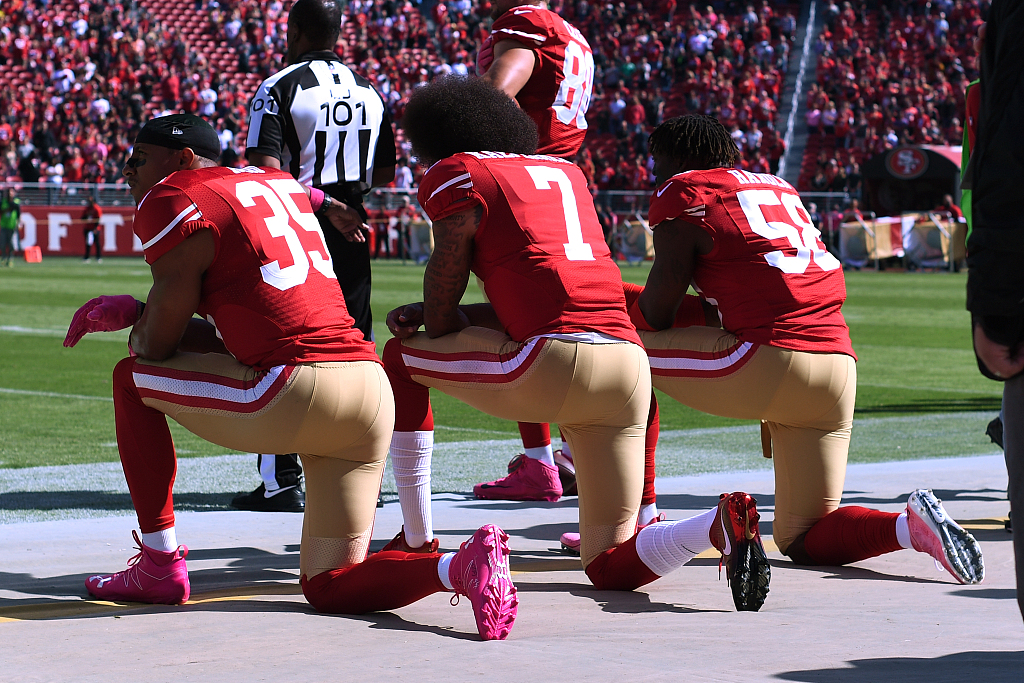 Eric Reid #35, Colin Kaepernick #7 and Eli Harold #58 of the San Francisco 49ers kneel in protest during the national anthem prior to their NFL game against the Tampa Bay Buccaneers in Santa Clara, U.S., October 23, 2016. /VCG

Eric Reid #35, Colin Kaepernick #7 and Eli Harold #58 of the San Francisco 49ers kneel in protest during the national anthem prior to their NFL game against the Tampa Bay Buccaneers in Santa Clara, U.S., October 23, 2016. /VCG

Issues of racial injustice and police brutality were addressed by former San Francisco 49ers quarterback Colin Kaepernick as early as in 2016 when he started taking a knee during the national anthem.

"We have the right to fight back!" In his pinned tweet on May 29, Kaepernick encouraged people to fight for the racial equality.

Goodell's statement came one day after 2018 NFL MVP Patrick Mahomes and several of his peers released a video demanding the league condemn racism.

Mahomes, Saquon Barkley and Michael Thomas are among more than a dozen NFL stars who united to send a passionate video message to the league about racial inequality.

Thomas, the New Orleans Saints wide receiver who has led the league in receptions in the past two seasons, opens the video with the statement: "It's been 10 days since George Floyd was brutally murdered." The players then take turns asking the question, "What if I was George Floyd?"

The players then name several of the black men and women who have recently been killed, including Floyd, Breonna Taylor, Ahmaud Arbery and Eric Garner. 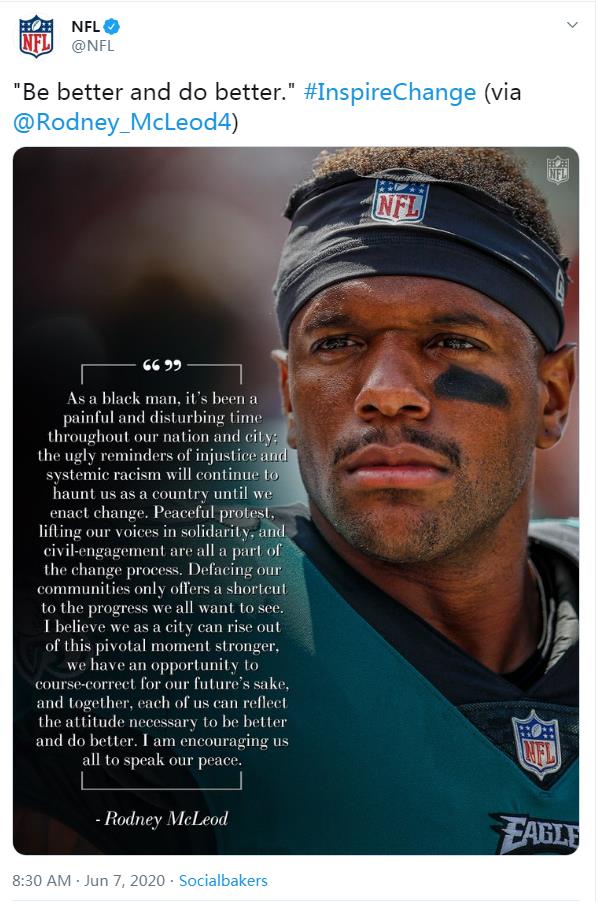 NFL retweets the words of Rodney McLeod of the Philadelphia Eagles on June 7, 2020.

NFL retweets the words of Rodney McLeod of the Philadelphia Eagles on June 7, 2020.

The New England Patriots have pledged one million U.S. dollars to support local organizations "that are fighting for equity, working to end systemic racism and create meaningful change in our community," according to a Twitter announcement from the team.

"We must commit to hold ourselves and our communities accountable! We must teach one another about our differences. We must embrace the different colors, cultures, and ways of life. To be multi-racial is beautiful and that is what this country is," said Dak Prescott whose words were tweeted by the NFL.

"Until you are black in America, you won't truly understand what it is to be black in America and that's fine. But don't act like this doesn't exist or isn't real," New Orleans Saints running back Alwin Kamara said.

"As a black man, it's been a painful and disturbing time throughout our nation and city: the ugly reminders of injustice and systemic racism will continue to haunt us as a country until we enact change.

"Peaceful protest, lifting our voices in solidarity, and civil-engagement are all a part of the change process.

"Defacing our communities only offers a shortcut to the progress we all want to see. I believe we as a city can rise out of this pivotal moment stronger, we have an opportunity to course-correct for our future's sake, and together, each of us can reflect the attitude necessary to be better and do better. I am encouraging us all to speak our peace," Philadelphia Eagles' footballer Rodney McLeod said.