DPRK state media: No reason to maintain ties with U.S., will beef up military forces
CGTN 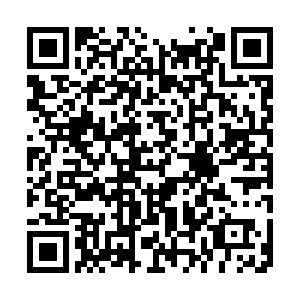 The DPRK will continue to build up its military forces to cope with the threats from the U.S., Foreign Minister Ri Son Gwon said in a statement carried by state news agency KCNA.

The move came after the DPRK announced suspension for communication hotlines with the Republic of Korea (ROK) on Tuesday. The United States expressed its disappointment, but the DPRK hit back immediately after, calling on the world's number one economy to "keep its mouth shut."

Trump and Kim exchanged insults and threats during 2017 as the DPRK made large advances in its nuclear and missile program and the United States responded by leading an international effort to tighten sanctions. 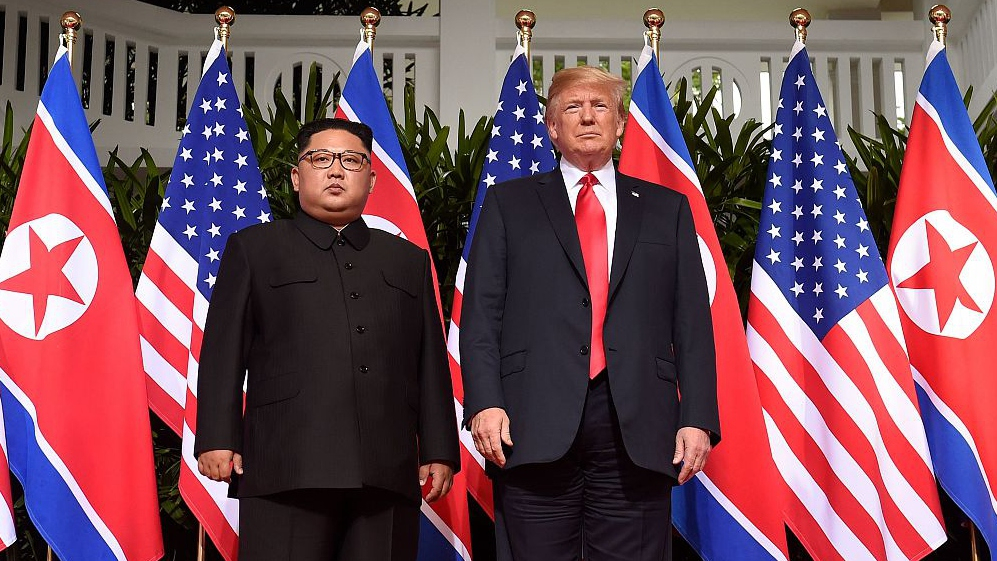 U.S. President Donald Trump (R) poses for pictures with DPRK leader Kim Jong Un at the start of their historic U.S.-DPRK summit at the Capella Hotel on Sentosa island in Singapore, June 12, 2018. /VCG

U.S. President Donald Trump (R) poses for pictures with DPRK leader Kim Jong Un at the start of their historic U.S.-DPRK summit at the Capella Hotel on Sentosa island in Singapore, June 12, 2018. /VCG

Relations improved significantly around the Singapore summit in June 2018, the first time a sitting American president met with a DPRK leader, but the statement that came out of the meeting was light on specifics.

Trump-Kim summits: From Singapore to Hanoi, what has changed?

A second summit in February 2019 in Vietnam failed to reach a deal because of conflicts over U.S. calls for the DPRK to completely give up its nuclear weapons, while the latter demands for swift sanctions relief.

Ri said in retrospect the Trump administration appears to have been focusing on only scoring political points while seeking to isolate and suffocate the DPRK, and threatening it with preemptive nuclear strikes and regime change.

"Never again will we provide the U.S. chief executive with another package to be used for achievements without receiving any returns," he said. "Nothing is more hypocritical than an empty promise."

The U.S. State Department and the White House did not immediately respond to requests for comment.

DPRK also calls out UN: Stop acting like a drunk

Pyongyang's decision, announced on Tuesday, marks a new setback to stalled efforts for inter-Korean relations. For several days, the DPRK had been lashing out at the ROK, accusing the latter for failing to stop "defectors" from sending leaflets and other anti-Pyongyang materials into the DPRK. 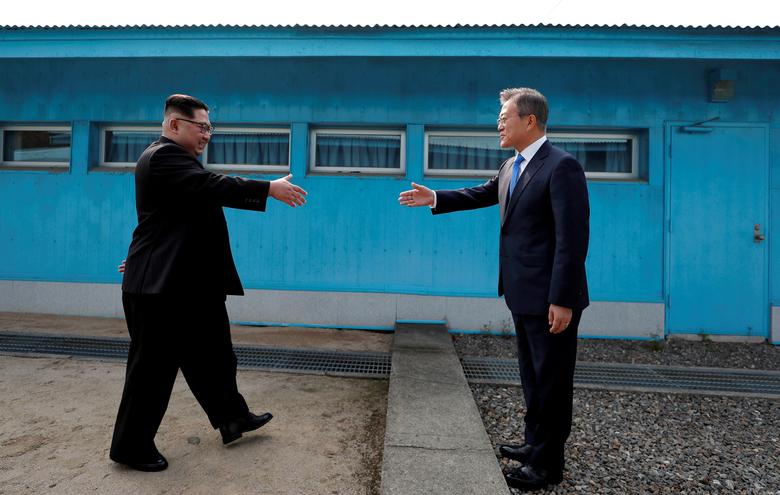 ROK President Moon Jae-in (R) and DPRK leader Kim Jong Un shake hands at the truce village of Panmunjom inside the demilitarized zone of the border between the two countries, April 27, 2018. /Reuters

ROK President Moon Jae-in (R) and DPRK leader Kim Jong Un shake hands at the truce village of Panmunjom inside the demilitarized zone of the border between the two countries, April 27, 2018. /Reuters

On Friday, Pyongyang also responded harshly, "it is only the UN Secretary-General himself who would know whether he is pretending to blind himself to the articles of inter-Korean agreement on ceasing all hostilities against the other party or pretending to be knowingly drunken," said a spokesperson for DPRK's Foreign Ministry.

The spokesperson said the remarks from the UN "cannot be overlooked" and accused Guterres of siding with the United States by expressing inappropriate and biased views, adding: "We never pardon anyone who dares to point a finger at our most precious and sacred Supreme Leadership."

The DPRK has been subjected to UN sanctions since 2006. They have been strengthened by the 15-member Security Council over the years in a bid to cut off funding for Pyongyang's nuclear and ballistic missile programs.

Noting that the leaders of the DPRK and the U.S. reached a consensus on establishing a new type of bilateral relations on this day two years ago, it is a pity that the relevant consensus has not been effectively implemented and the dialogue has reached a deadlock, Foreign Ministry spokesperson Hua Chunying said during Friday's press conference.

Hua further pointed out that one reason for the deterioration in bilateral relations since the summit in Singapore in 2018 was because the DPRK's legitimate concerns had not been resolved.

The U.S. should take concrete actions to implement the consensus and respond to the DPRK's legitimate concerns on development and security, and safeguard the hard-won detente on the Peninsula, Hua added.

"China is willing to continue to play a constructive role in the political settlement of the Korean Peninsula issue," Hua said.