Editor's note: This is the 76th article in the COVID-19 Global Roundup series. Here is the previous one.

Beijing registered 36 new domestically transmitted COVID-19 cases as of Saturday, all linked to a local wholesale market, prompting fears that a second wave of coronavirus might emerge from grocery outlets that are difficult to avoid.

Local authorities announced during a press conference that the strain collected from the Xinfadi wholesale market, to which all cases have been linked, is different from the version that was first encountered in China. The epidemiological investigation also detected coronavirus from an imported salmon processing table.

Beijing has since suspended operations at the market.

Meanwhile, the city has started to conduct nucleic acid tests for COVID-19 on market staff as well as nearby residents.

In France, the wife of "patient zero" who tested positive on December 27, 2019, works in supermarket fish stall. She confirmed that she had only been exposed to fish processed in France.

Beijing is not the only city facing challenges from fresh-and-grocery related cluster infections.

Seattle-based American Seafoods confirmed that 92 fishermen from its American Dynasty ship, nearly three-fourths of the 124 members on board, had tested positive for COVID-19, according to a local report this week.

The American Dynasty came into port in Washington after fishing before heading to Alaska for the summer pollock fishery. One crew member reported feeling sick to the vessel medic and was then reported positive for COVID-19 on Tuesday.

American Seafoods is the biggest supplier in the country's fishery industry, accounting for 17 percent of last year's total catch. Other seafood companies have required employees to quarantine for 14 days before they're tested and cleared for work, but American Seafoods only requires five days minimum quarantine time. 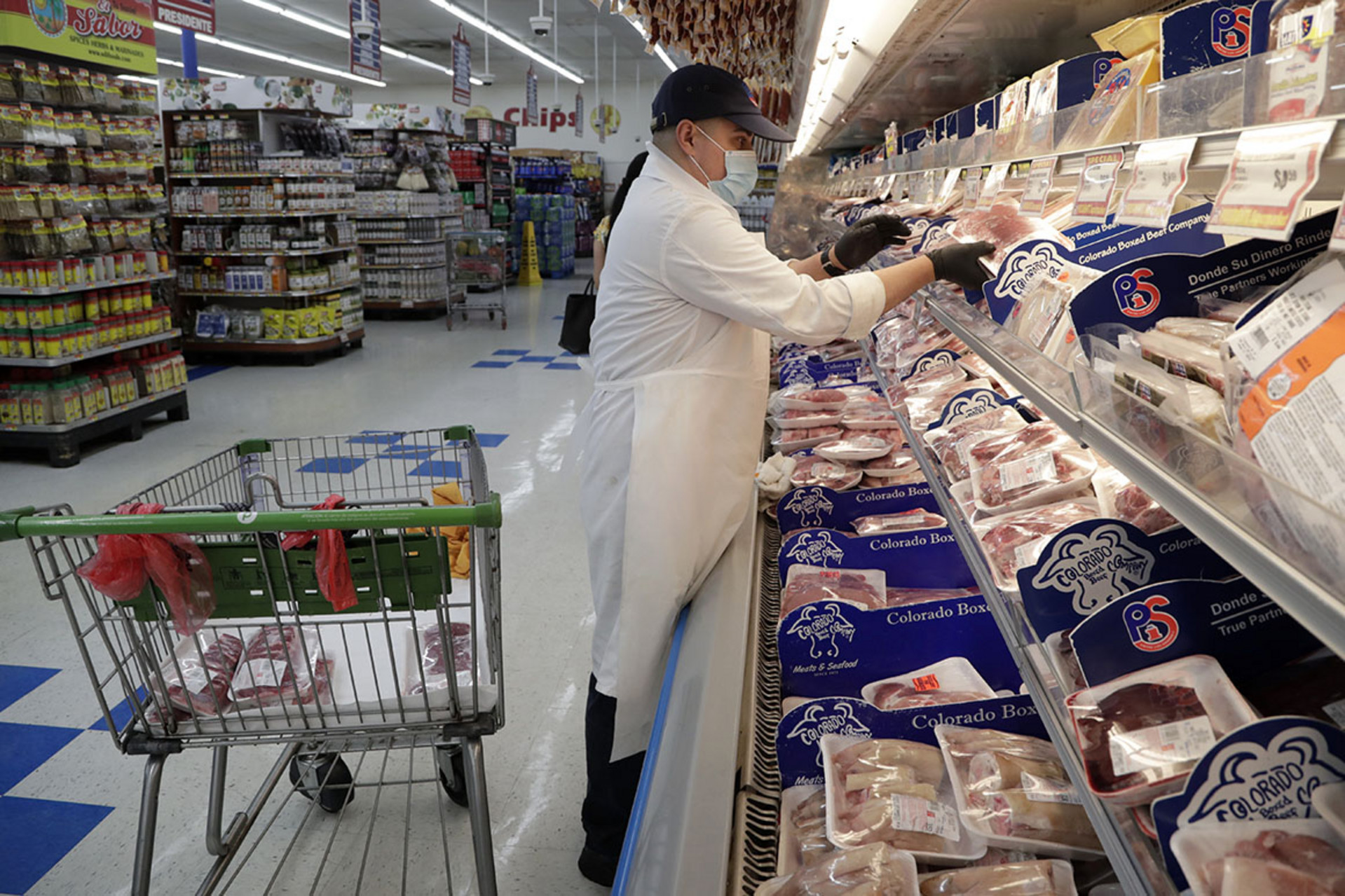 Melvin Menendez wears a protective mask as he stocks shelves with meat, April 21 at the Presidente Supermarket in Hialeah, Florida. /AP

Melvin Menendez wears a protective mask as he stocks shelves with meat, April 21 at the Presidente Supermarket in Hialeah, Florida. /AP

The news hit the industry management levels hard, as they were reportedly putting containment measures in place to prevent incidents like this in recent months.

"It was like, 'wow, I can't believe this.' We had done so much – each company had worked so hard to try to avoid this happening," said Brent Paine, executive director of United Catcher Boats, a trade group whose members fish for pollock and cod off Alaska and another whitefish called hake off Washington and Oregon. "None of us have ever worked so hard in our lives than we have in the last two months, without a doubt."

Similar cluster infections have created challenges for American workers in meat and poultry processing facilities as well. Based on the data of 19 states that reported to the Centers for Disease Control and Prevention (CDC), among approximately 130,000 workers at these facilities, 4,913 cases and 20 deaths occurred.

Some factors are making it excessively difficult to contain the virus spreading in places like food markets.

First all, it is not feasible to shut them down like theaters, restaurants, factories and religious places. It is essential to keep the markets flow in terms of customers, workers as well as commodities.

Factors potentially increasing the risk for infection also include difficulties with workplace physical distancing and hygiene and crowded living and transportation conditions.