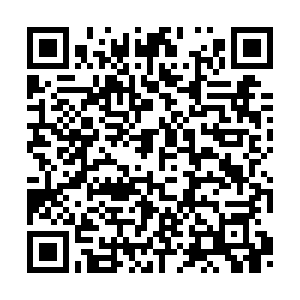 Editor's note: This is the 83rd article in the COVID-19 Global Roundup series. Here is the previous one.

Argentine President Alberto Fernandez announced on Friday a re-tightening of coronavirus-induced lockdown measures in the country's capital Buenos Aires as the city's COVID-19 caseload has risen sharply in recent weeks.

Thus far, the Argentine government has saved lives by enacting a swift and strict lockdown in late March, but this means that the country's period of battening down its hatches has been among the longest in the world. With an economy chronically in need of life support, the wider damage wreaked by COVID-19 on the Latin American giant could be severe. 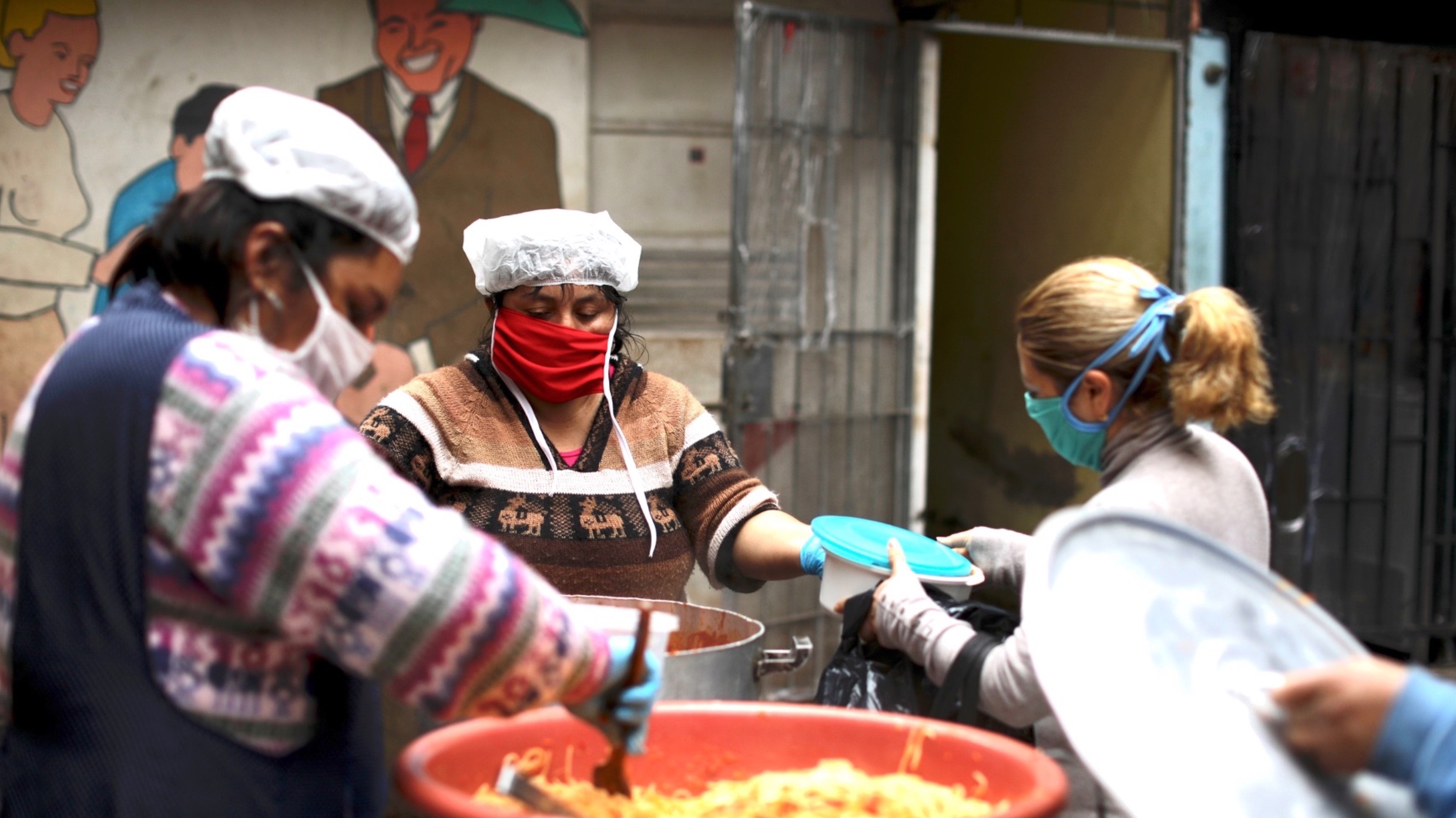 Volunteers serve free food to residents inside the Fraga slum during a government-ordered lockdown to curb the spread of the new coronavirus, in Buenos Aires, Argentina, June 6, 2020. /AP

Volunteers serve free food to residents inside the Fraga slum during a government-ordered lockdown to curb the spread of the new coronavirus, in Buenos Aires, Argentina, June 6, 2020. /AP

A swift and strict lockdown

The Argentine government imposed a compulsory quarantine period and near total shutdown of the economy and public spaces on March 20, when the new type of coronavirus was far away gripping Europe instead. Schools had already been closed, despite there only being around 50 cases in the country at the time. One month later, commercial flights were banned until September 1.

While Argentina has one of the most robust health care systems in the region, it was not ready to face a large-scale outbreak akin to those suffered by Italy and Spain.

"This multi-faceted aggressive response has worked," Martin Langsam, a lecturer in public health at NYU Buenos Aires, told CGTN. The Argentine government's decisions "appear to have avoided the increasing humanitarian and health disaster that is now sweeping its neighboring country of Brazil."

But, the number of overall cases in the country has risen five times since late May and is currently 55,343 while the death toll stands at 1,184 according to Johns Hopkins University, in a country of approximately 45 million people. The problem is a concentrated one: The Greater Buenos Aires conurbation is home to roughly one third of the population, and according to Fernandez on Friday is "infecting the rest of the country."

"We need time to guarantee that our health system is ready and can serve everyone," the president said as he announced that the capital's tougher measures would last until July 17. "The quarantine is a remedy for the pandemic, the only one we know of." Even Fernandez himself has been asked by his doctor to limit his activities.

Despite the Argentine government's initial decisive response to the pandemic, storm clouds could be gathering on the horizon as early action has not been sufficiently consolidated, according to Nicolas Saldias, senior researcher for the Argentina project Washington, D.C.-based think tank the Wilson Center.

Fernandez's administration "has not taken the time granted to it by the quarantine to sufficiently shore up its ability to control the outbreak. Testing is still very low, even by regional standards," he told CGTN. "This means the government is running days or even weeks behind... reacting to the virus instead of proactively dealing with it." 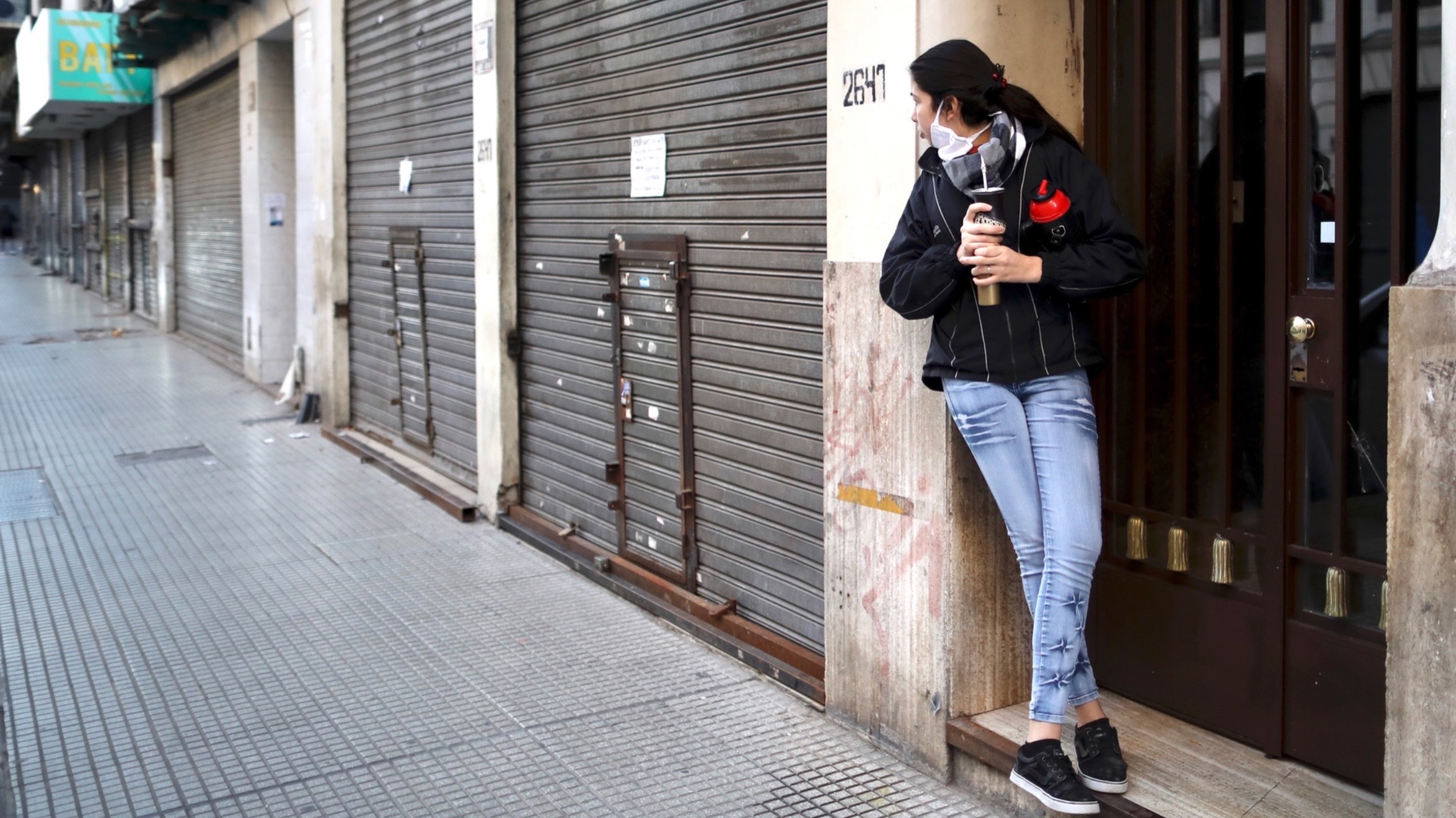 A woman drinking mate looks down a street lined with shuttered businesses amid the coronavirus pandemic in Buenos Aires, Argentina, Friday, June 26, 2020. /AP

A woman drinking mate looks down a street lined with shuttered businesses amid the coronavirus pandemic in Buenos Aires, Argentina, Friday, June 26, 2020. /AP

The Argentine economy is expected to decline 10 percent this year, having already suffered two years of recession, according to research firm The Economist Intelligence Unit.

The country's key indicators tell a grim story, with unemployment rising to 10.4 percent in the first quarter of this year, year-on-year inflation for the period at 50 percent and the poverty rate at 35.5 percent by the end of 2019.

"We think worse is to come," Fiona Mackie, regional director for Latin America and the Caribbean at The Economist Intelligence Unit, told CGTN. "All this suggests that there is a long, hard road ahead for the Fernandez administration. It has only a narrow path to recovery."

On June 19, Argentina's economy ministry announced that it was extending a deadline for restructuring talks over its 65 billion U.S. dollars debt after negotiations with creditors came to a halt. Roughly one month earlier, the country defaulted on a 500 million U.S. dollars interest payment, its ninth default in history.

Argentina's "economic outlook was already dim and depended to a great extent on the results of sovereign debt renegotiation," NYU Buenos Aires' Langsam explained. "This means that not having enough reserves or access to credit, (so) Argentina – like many other countries – has resorted to monetary issuance in order to increase public spending in the face of the pandemic."

As with other developing economies, saving the lives of the older population while not pushing young people further into poverty is a difficult balance the government must strike.

"The constant extension of the quarantine has created so much uncertainty that many firms are closing down for good, or are on the verge of doing so. As the number of firms collapse, any economic recovery will be protracted," Saldias of the Wilson Center said. 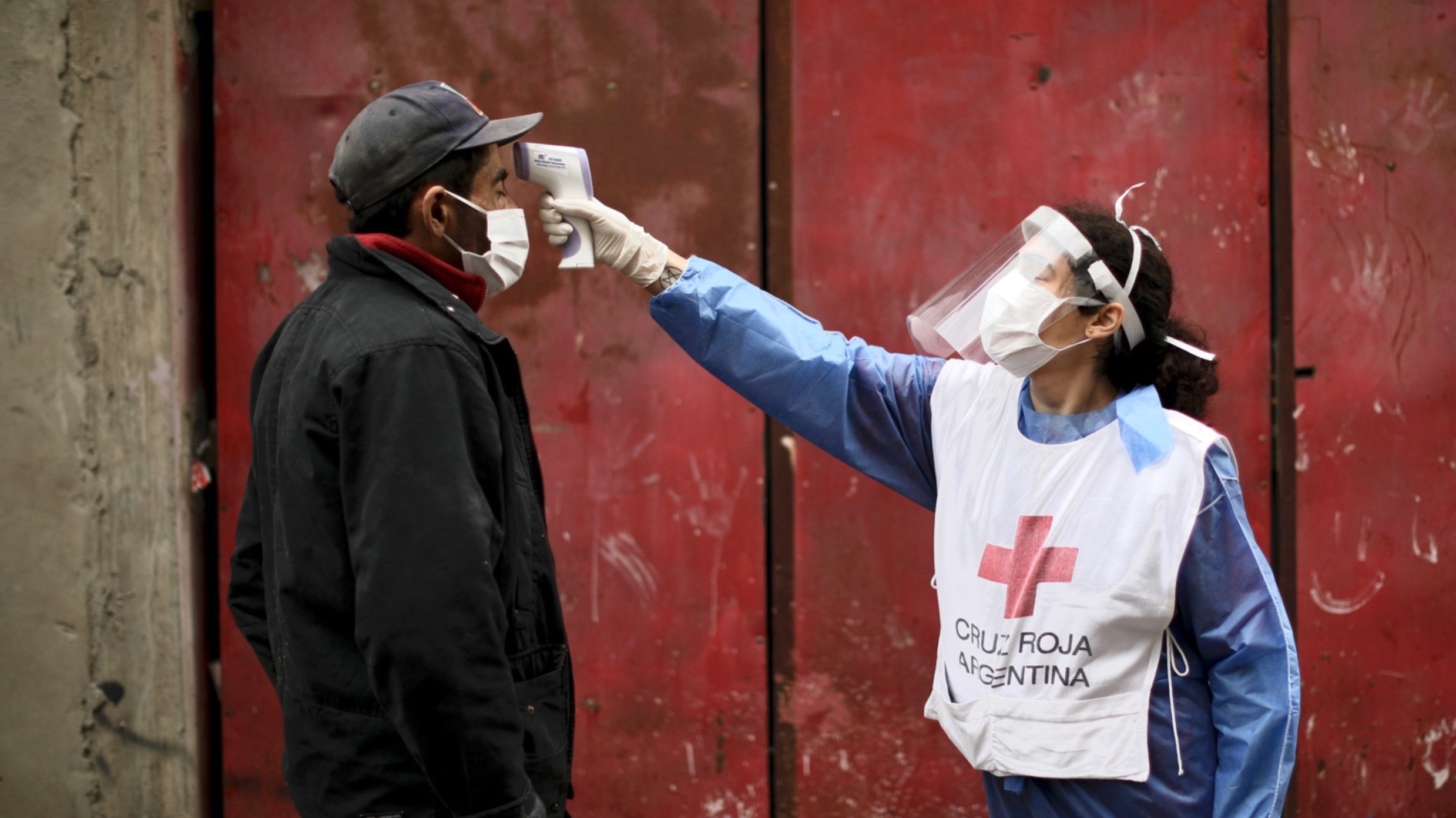 A Red Cross volunteer measures the temperature of man at the Fraga slum in Buenos Aires, Argentina, June 6, 2020. /AP

A Red Cross volunteer measures the temperature of man at the Fraga slum in Buenos Aires, Argentina, June 6, 2020. /AP

In the end, it is not only the firms' future that hangs in the balance but the whole country, including its president. Fernandez' approval ratings, as has been the case with many other world leaders, have received a boost due to the pandemic. According to pollster Zuban Cordoba y Asociados, 77.7 percent of those asked in May said that they viewed the president positively.

Nonetheless, Fernandez's political career is dependent on the country's ensuing economic situation as the pressure of lockdown begins to bite, crucial ahead of midterm elections next year.

Despite the alarming rise in new COVID-19 cases, Argentina's success in stifling the pandemic so far invites comparison with its larger neighbor Brazil, currently a global hotspot for the health crisis.

Bolsonaro has been criticized for his dismissive attitude towards the new coronavirus. "The real difference is the willingness of the (Argentine) government to absorb the economic costs of quarantine," Saldias said.

"The tight coordination between the central government, governors and mayors in Argentina over lockdown measures stands in sharp contrast to the battles and confrontations in Brazil where Bolsonaro sacked his health minister and clashed with regional governors," Langsam explained.

While both Argentina and Brazil have federal systems, Argentina's governors are more dependent on money flows from the heart of government in Buenos Aires than their counterparts in Brazil are on the same from Brasilia. As a result, the former's lockdown was imposed simultaneously on all 24 provinces, and can only be lifted with the approval of the president.

Collective support of the leadership has played a role in Argentina and Brazil's trajectories thus far. "Bolsonaro split with the party that brought him to power, whereas Fernandez is a product of (Peronism), one of Latin America's most enduring and powerful national movements," Langsam detailed.