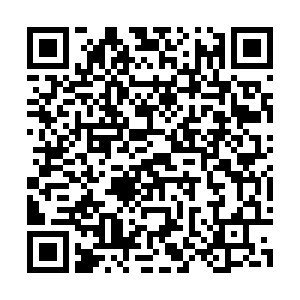 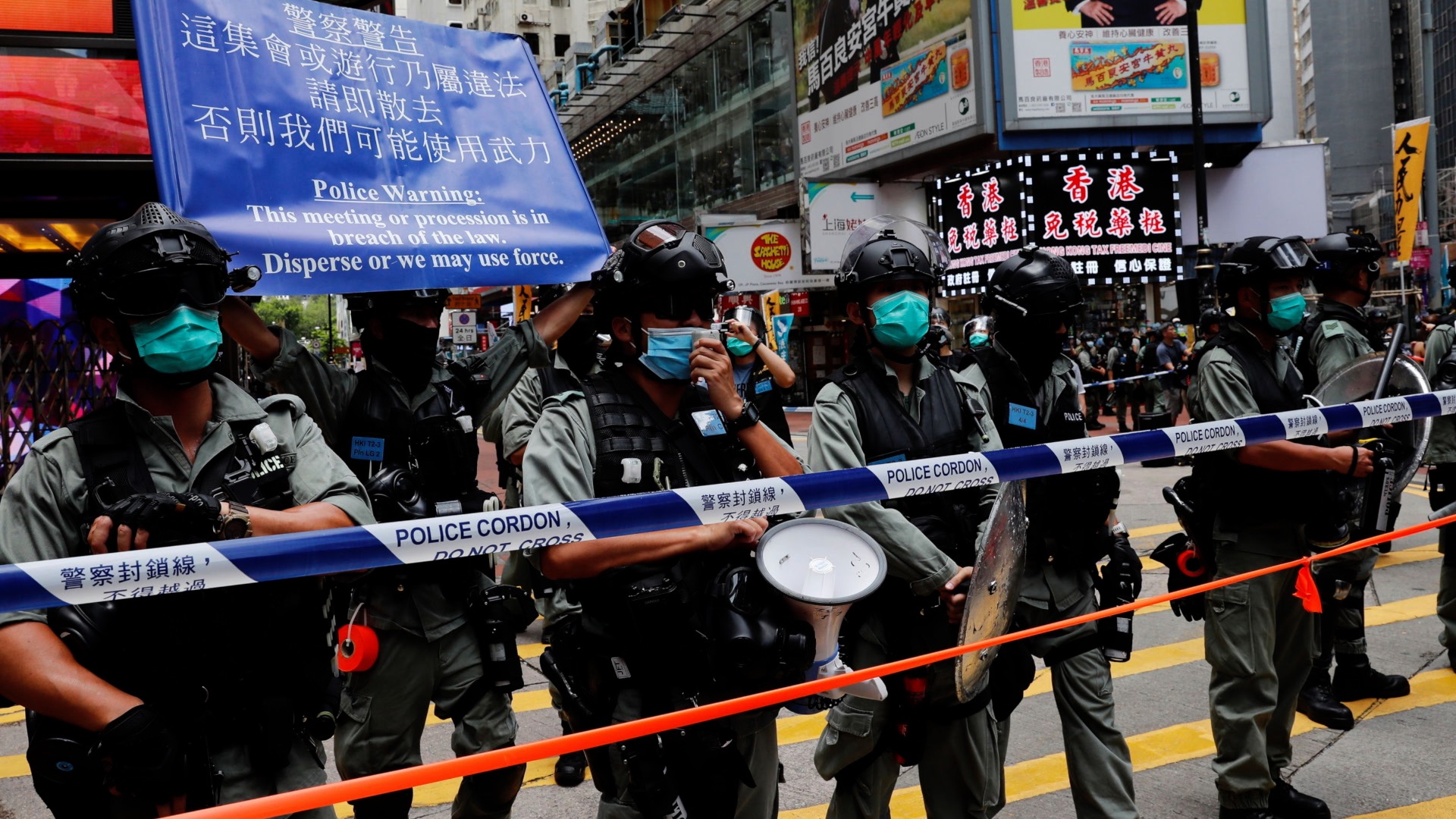 The government of China's Hong Kong Special Administrative Region (HKSAR) condemns rioters' violent behaviors during Wednesday's protest, stressing a zero-tolerance attitude towards any illegal acts that undermine the peace of the society, according to a statement released on Wednesday night.

A spokesperson for the HKSAR government said the government sternly condemned those who participated in the unlawful assemblies, committed violent and illegal acts, and even caused severe bodily wounding to police officers.

Hong Kong police said on Wednesday that as of 10:00 p.m. local time, around 370 people have been arrested for participating in unauthorized assemblies, disorderly conduct, reckless driving and other related offenses, including 10 on suspicion of violating the Law of the People's Republic of China on Safeguarding National Security in the HKSAR.

According to the police, seven police officers were injured on duty. A rioter stabbed one with a dagger, and three were hit by a rioter driving a motorcycle.

Lawful protests in the HKSAR are always respected, but unlawful acts are to be rejected, said the police on the social media platform, urging the protesters to stop breaking the law.

The spokesperson said that the HKSAR government fully supports the police in strictly and resolutely enforcing the national security law and other laws of the HKSAR to restore social order and peace and protect Hong Kong residents' life, property and legitimate rights and freedoms. 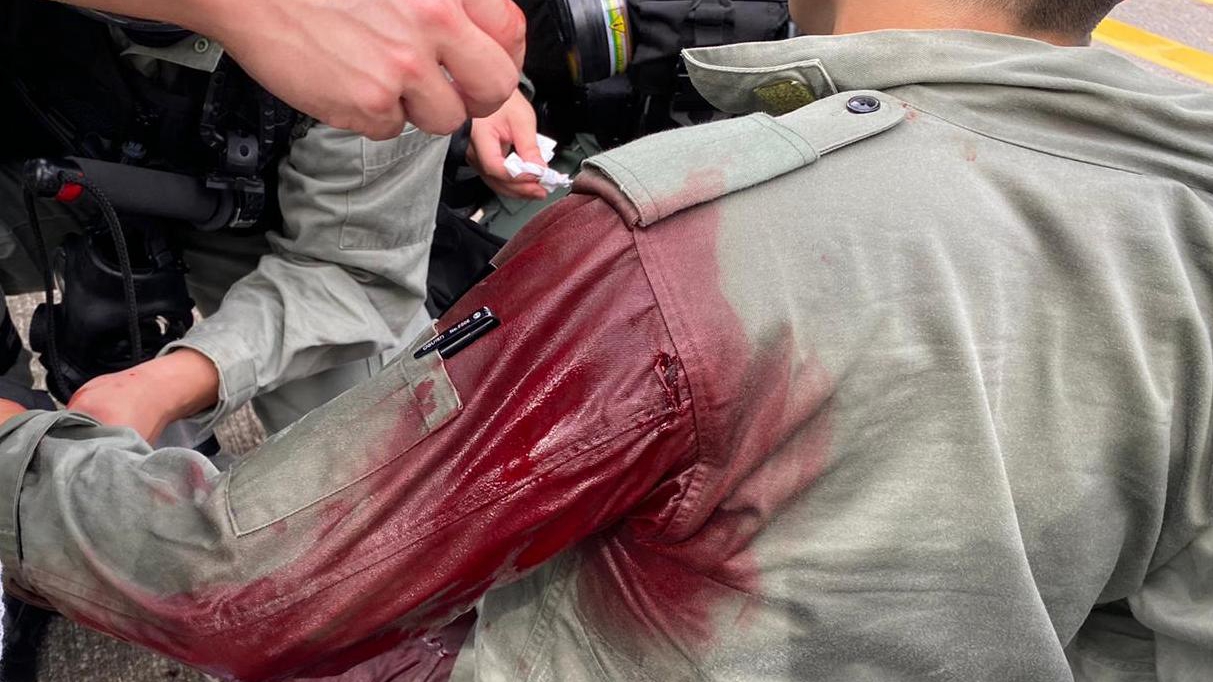 Among the 10 arrests, a man was arrested for holding a "Hong Kong independence" flag in Causeway Bay in the HKSAR on Wednesday under China's newly passed national security law for the HKSAR, marking the first arrest made since the law came into force.

When asked about the first arrest under the newly passed law, Chinese Foreign Ministry spokesperson Zhao Lijian said on Wednesday that anti-China activities in the HKSAR, if any, will be punished in accordance with the relevant laws following the passage of the national security law.

Another nine arrests are five males and four females, according to the police.

During a protest in Causeway Bay, a police officer was stabbed in the arm by a rioter holding a sharp object when he was making an arrest.

The man was arrested on board a flight that was about to take off for London, police said Thursday.

"During the early hours of July 2, a 24-year-old man surnamed Wong was arrested at the airport on the suspicion of wounding [an officer]," police said in a statement.

A police source, requesting anonymity in order to speak openly, said the man was pulled from Cathay Pacific flight CX251 to London, moments before it was due to leave the departure gate.

"He bought a ticket last minute. He was the only passenger on the flight to have purchased a ticket so late and had no check-in baggage with him," the source told AFP.

"The police strongly condemn such violent attacks and will launch a comprehensive investigation to bring these callous criminals to justice," the police said. 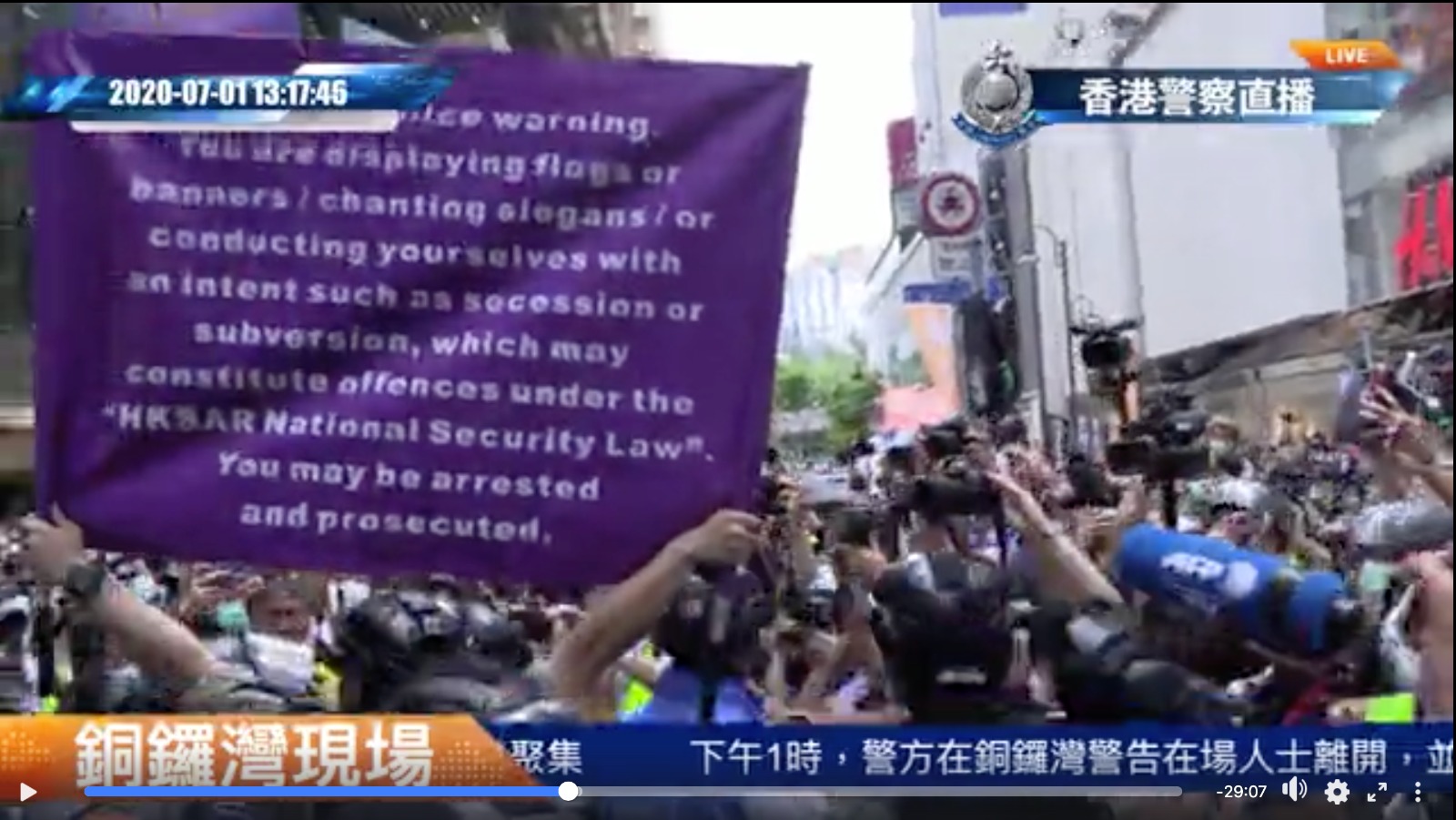 Written in both Chinese and English, the purple flags serve to warn protesters who display flags or banners or chant slogans that show secessionist or subversive intentions.

(Cover: Police officers stand in a line as protesters gather in the HKSAR, China, July 1, 2020. /Reuters)

Official: National security law for HKSAR a milestone for 'One Country, Two Systems'