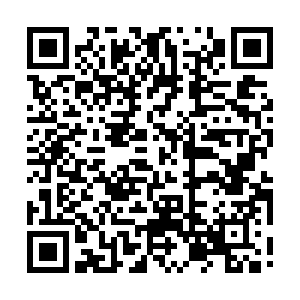 This is the 87th article in the COVID-19 Global Roundup series. Here is the previous one.

Confirmed cases of COVID-19 surpassed 410,000 on July 2 across the African continent, according to data from the Africa Centers for Disease Control (Africa CDC). While it took 98 days to reach 100,000 cases, it took just 18 to reach 200,000 cases and 12 days to reach 300,000. The World Health Organization (WHO) has warned that the virus is now spreading widely across the continent, which could lead it to become the next global epicenter.

For the developing continent, the disease fallout has severely affected many sectors, further weakening its public health system as well as hobbled its economy. 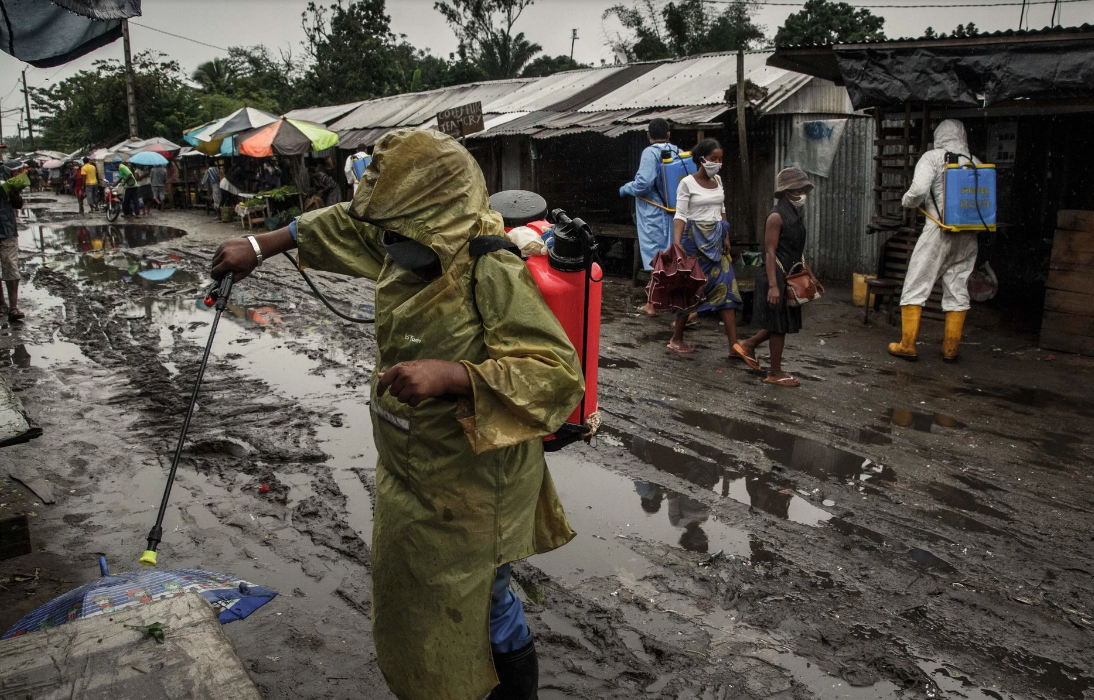 Health workers disinfect a market in Toamasina, Madagascar, in June 2020. /Photo from AFP

Health workers disinfect a market in Toamasina, Madagascar, in June 2020. /Photo from AFP

Since the first case was confirmed in Egypt in February 2020, COVID-19 has been stretching medical resources across Africa.

In March, WHO Director General Dr. Tedros Adhanom Ghebreyesus warned that the continent should "wake up" given its weak health infrastructure, poverty, conflicts, poor sanitation and urban crowding.

However, many African countries do not have the healthcare capacity to treat severely ill COVID-19 patients. 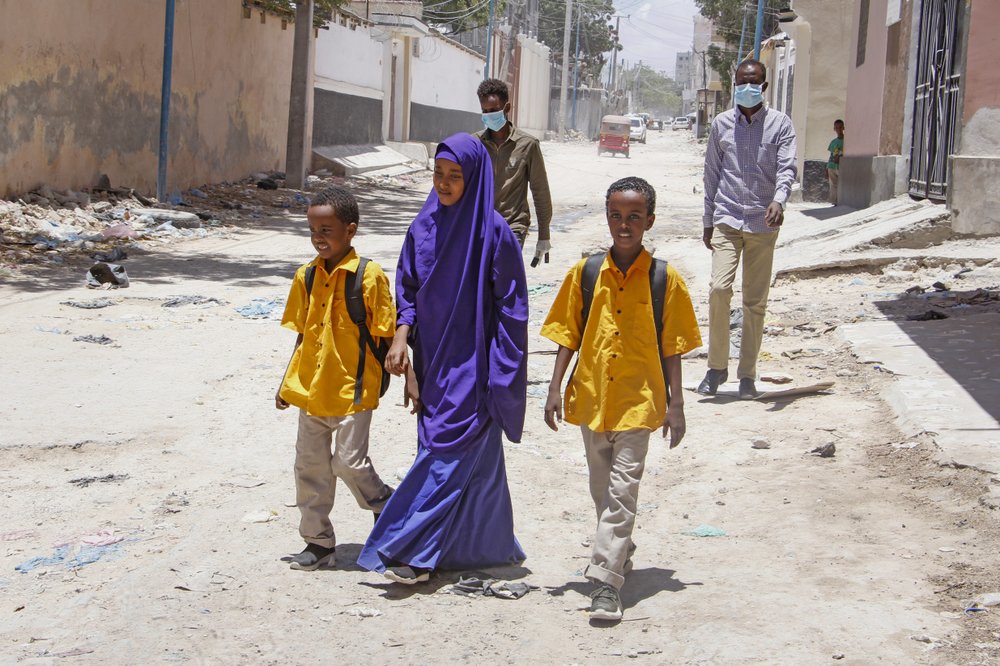 Somali schoolchildren walk home, while other people wear surgical masks, after the government announced the closure of schools and universities and banned large gatherings. /AP

Somali schoolchildren walk home, while other people wear surgical masks, after the government announced the closure of schools and universities and banned large gatherings. /AP

Africa CDC has warned of a "catastrophic shortage" of healthcare professionals, and a drastic reduction of medical supplies due to border closures, price increases and restrictions on exports.

In 34 of sub-Saharan Africa's 45 countries, per capita health spending in 2019 was below 200 U.S. dollars and the figure barely reached 50 U.S. dollars in many of those countries, according the World Bank. Such a low level of spending makes paying for doctors and other health professionals a luxury in Africa.

The WHO estimated 100,000 people in Africa died as a consequence of fake drugs last year. An underworld of quack doctors in Ghana, West Africa, have been exploiting the coronavirus pandemic and making money selling fake coronavirus cures, the BBC reported earlier this week. 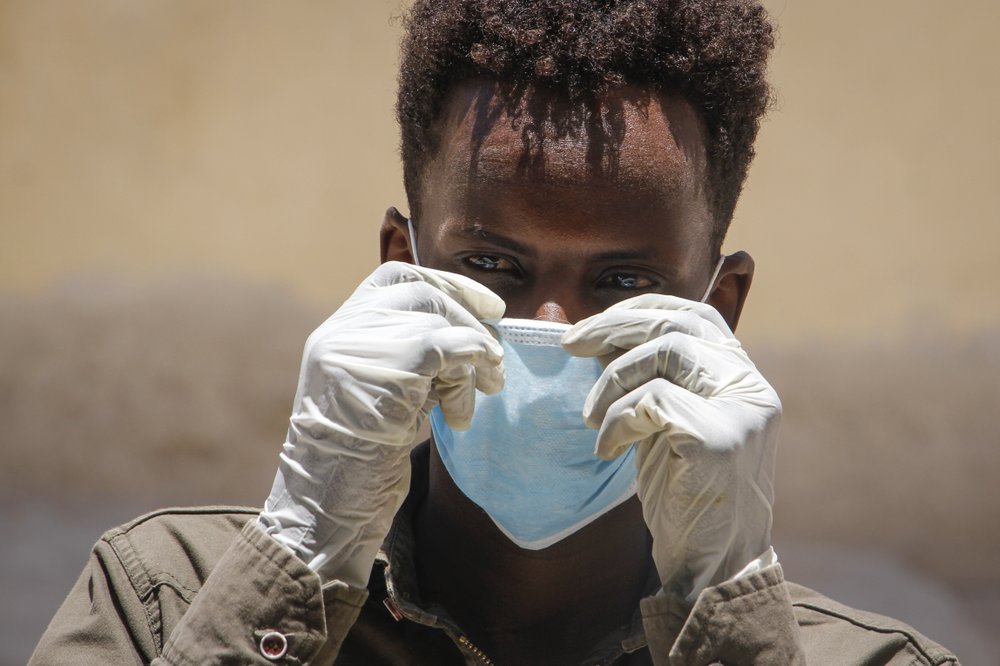 A Somali man wears a surgical mask and gloves on the street. /AP

A Somali man wears a surgical mask and gloves on the street. /AP

In April, the World Bank predicted that the pandemic would push sub-Saharan Africa into its first recession in 25 years.

For countries reliant on oil production, the price collapse and the pandemic have created threats to all sections of society.

"No one imagined a crisis of this scope. This was in no scenario," Daniel Yergin, an expert on global energy, told The New York Times in April.

In Nigeria and Angola, which both derive 90 percent of their export earnings from oil, the compounding impact of drastically reduced income is devastating.

"My country is a classic poster country for poor governance of natural resources," said Oby Ezekwesili, a former World Bank vice president who also served as Nigeria's education minister. "Oil prices rise and our expectations blow up, and then they fall and our expectations collapse."

As a result of conditions exacerbated by the pandemic, Africa is facing multiple severe famines, particularly the Democratic Republic of the Congo, Ethiopia, Nigeria and Sudan, the United Nations warned.

The collapse in oil prices, economic recession and conflict are also factors that could result in food shortage. Measures like quarantines and social distancing could disrupt the food supply as workers are forced to stay at home and farmers no longer have access to the market. 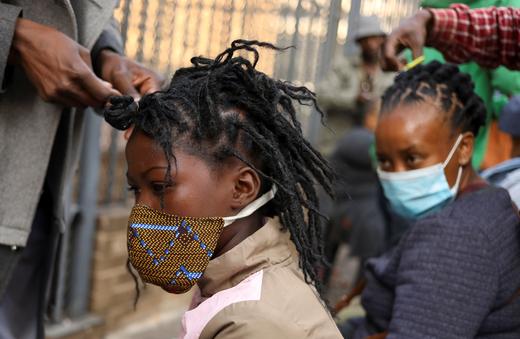 Customers are attended by roadside hairdressers, openly flouting lockdown regulations amid the spread of the coronavirus on June 10, 2020. /Reuters

Customers are attended by roadside hairdressers, openly flouting lockdown regulations amid the spread of the coronavirus on June 10, 2020. /Reuters

The response in Africa's 54 countries is far from uniform. However, policies have been well coordinated in some countries.

In South Africa, one of the continent's most industrialized countries, the COVID-19 epidemic has bucked trends seen in other countries.

Before reporting the first death from COVID-19, the government declared a national state of disaster and implemented a nationwide lockdown.

Boasting the highest standard of healthcare in Africa, South Africa has over 200 private hospitals that offer services on par with advanced countries in Europe, Asia and the Americas. Also, the country's experience with fighting HIV and tuberculosis has yielded promise in the battle against COVID-19.

Measures like a lockdown in the early stage and distributing water to informal settlements to aid in hand-washing helped the country avoid a rapid rise in cases.

Uganda, located in East-Central Africa, suspended public gatherings before the first confirmed case in the country. Nigeria started screening passengers at international airports almost one month before the first documented case of infection.

So far, the recovery rate in Africa follows a promising trend. According to data from Africa CDC, which might greatly underestimate the full picture, about 410,000 people have been infected, with 198,000 recoveries.

"Africa, drawing on the muscle memory of previous epidemics, has mounted a response from which others can learn," David Pilling, an editor at Financial Times, wrote in April.